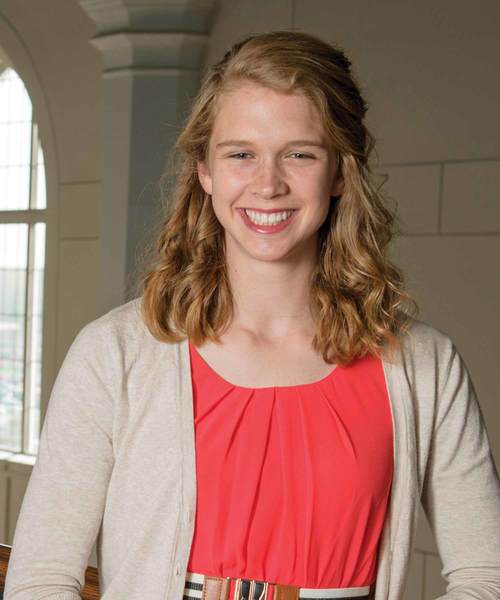 Even if Anna Kottkamp hadn’t won practically every possible major distinction for a Division I collegiate athlete.

Even if she hadn’t left an indelible mark on the Fighting Irish women’s rowing team.

Even if she hadn’t maintained a perfect 4.0 grade point average while earning an environmental sciences degree and becoming the first student-athlete to be named University of Notre Dame valedictorian.

Even, then, Anna Kottkamp would still be a remarkable young woman.

Soft-spoken but articulate, she nurtures a vision for her future that is guided by her faith.

“I believe God has given me this life not to keep but to give away to others, and therefore I understand myself as being called to give back what I’ve been given,” she says. “Any success has been about something bigger than myself.”

Though her accomplishments and accolades are indeed significant, it is the orientation of her life that makes her extraordinary.

“What initially may have been a motivation for perfectionism has broadened into a deep commitment and resolve, guided by this vision of myself and carrying that into my future and into the world. I’m much happier that way, actually,” she says with a laugh, “than when I was just pushing to get grades for their own sake.”

While it’s typical for many college students to abandon the faith of their upbringing, Kottkamp made a conscious decision “that it was still something I wanted to claim for myself and try to nourish while I was an undergraduate.” Growing up Lutheran, she appreciated “all the richness of formative opportunities available at Notre Dame for those who seek them out. I cultivated relationships on campus with people of many different faiths and also those who had no particular faith. The diversity of those connections has been valuable for me, and I’m grateful for them.”

Literally, then, she lives her life as “eucharist”: an active expression of gratitude or returning thanks.

The passion and excellence she demonstrated in her field of academic study was simply one manifestation of her life’s orientation.

“I was fortunate to develop an intersection between my interest in science and my social concerns. Thinking about things like food justice and environmental racism helped me appreciate that you cannot separate any environment from the people who live in and near it. There are many groups worldwide involved in conservation work, but I learned that conservation is not a simple concept. It’s important to look not only at what various groups are doing but how they’re doing it, what values they embody as they do their work.

“Often it takes an immersive experience to shift our awareness, to dismantle long-held beliefs or principles and become open to seeing things as they are instead of blinding ourselves to what is uncomfortable to gaze upon.”

So Kottkamp immersed herself—first, in a weeklong Global Health Seminar in Honduras during her sophomore year; next, through an eight-week Kellogg Institute fellowship in Peru the summer before her junior year; and then with a five-week research experience in Bolivia for her senior capstone project.

“I’m so blessed that I’ve been able to experience such things, but there’s another side to it,” she says. “I have this responsibility now to go out and share, to work, to show others and maybe encourage them to come see what I’ve seen and to join in the work that is being done on behalf of those without voices or power to use them.”

Kottkamp is about halfway through a “gap year” of intentional service with the Jesuit Volunteer Corps—Northwest, an AmeriCorps program. She shares a house in the tiny town of Odell, Oregon, with five other young women who have also committed a year of their lives to JVC values: community, spiritual reflection, social/ecological justice and simple living.

“We’ve all taken a vow of poverty, actually, for this year,” Kottkamp says, “as we live out these ideals together and in our various work placement sites.”

The beneficiary of Kottkamp’s gifts is the Columbia Gorge Ecology Institute which, according to its website, exists to provide experiential programming toward an ecologically literate citizenry.

Kottkamp says: “We use a well-established curriculum called SECRETS to teach elementary and middle school students in the Gorge about the biology and ecology of this really unique region in which they live. I made a few updates to the curriculum before the school year began, incorporating some next-generation science standards, which are always evolving. The lessons include things like skits and games and activities, field trips, surveys of the flora and fauna of the Gorge, all very exciting and really wonderful educational tools.”

“Our programs are funded by small donations and grants so that we are able to go into public schools which otherwise would not have access to this kind of specialized-localized education,” she says. “We’re not going into the private schools or the wealthy public schools, and for me, that’s a significant component of both the how and why we’re doing this work. It’s really an honor to meet these students and be able to foster their sense of wonder about this place where they live.

“I share a mutual curiosity with them and am intentional about exploring their questions with them instead of just giving them the answer and moving on. It’s fun to provide them with some of the elementary tools toward grounding in the scientific method so they can continue to foster that curiosity as they get older.”

Pull out your textbooks, class, and let’s step into Anna’s world for a moment.

In 1943, Nobel prize-winning physicist Erwin Schrödinger gave a lecture in Dublin that was later combined with two successive lectures and published as a book entitled “What is Life?” Although the book was intended for a lay audience, few have a sufficient background in quantum mechanics or biophysics to understand the finer points of his hypotheses. However, he was among the first scientists to argue compellingly that living beings appear actually to violate the second law of thermodynamics (the axiom of entropy), which states that all things tend toward chaos and ultimately disintegration.

Life, Schrödinger postulated, is defined by its orderliness; a living organism is differentiated from nonliving matter by an ability to “succeed in freeing itself from all the entropy it cannot help producing while alive.”

Those with more of a theological than scientific bent may find it helpful to recall the words of Jesus in the Gospel of John: “I have come that you might have life, and have it abundantly.”

A life of orderliness is a life of abundance. While there may be no formula that proves this is so, Kottkamp certainly provides a worthy case study.

“I chose to miss out on some aspects of the typical college experience, rather than shortchange what really matters most. I attended maybe one football game each year, if my parents were in town. I decided not to add the whole nightlife/going-to-bars scene, and there was no hall council or flag football for me. I sometimes felt left out, but I do not regret the intention with respect to how I spent my time.

“Time is valuable and it has to come from somewhere,” Kottkamp says. “At Notre Dame I spent it on the river or in the lab or cultivating close relationships with a few dear friends. I sang with Voices of Faith, the gospel choir on campus, because having an outlet for worship and connecting with other believers who also are very intentional about following a greater purpose for their life is very important to me.”

Intention and giving back seem to be part of Kottkamp’s DNA. As an undergraduate at Notre Dame, she volunteered at the Monroe Park Grocery, a co-op associated with the Catholic Worker House in South Bend. On top of classes, lab research, strength training, rowing practice and competition, she spent several hours there each Friday and Saturday as she was able.

“It was nice to get out of the campus bubble and off the river, to meet real people who live in South Bend,” she says. “It’s hugely important for me not to forget what real life is like.”

Even the strong of heart can have fun, though.

Notre Dame women’s rowing needed a spectacular finish at the Atlantic Coast Conference championship, held at Clemson in May, in order to secure a berth in the national championship regatta held later that month at Sacramento State in Gold River, California. The first varsity eight-boat posted one of its best races all season (making program history by earning a fourth consecutive trip to nationals) before Kottkamp was whisked away for graduation weekend festivities.

“I got to fly in my own plane, in order to get back to campus from ACCs in time for graduation,” Kottkamp says.

“It was so not in line with environmental conservation,” she says jokingly. “There were only a couple other people and we had the plane all to ourselves.

“That weekend was surreal. I do not like speaking in front of groups, and here I’m about to give the valedictory speech before thousands of people. I’m sure my family thought I had turned into a total drama queen.”

Orderliness and vision paid off, though. Kottkamp had worked diligently with a speech coach, practiced countless times and surprised herself by feeling completely calm at the podium.

“After it was over I was definitely ready to relax and enjoy the rest of the weekend. As I walked around campus with my family, I could not believe the number of people who recognized and stopped me to say, ‘Congratulations,’ or mention a particular point they’d appreciated from my speech. It was definitely a rock star moment.

“And then Monday morning everything went back to normal. We were back on the water getting ready for nationals. I was back in the lab finishing up some research. It was a really nice way to say goodbye to the place and the people who had been so much a part of my life the last four years,” she says.

Her faith and intention continue to guide her.

She’s applying for international graduate school fellowships, excited at the thought of returning to academia after her year of volunteering.

“I’ve narrowed down what I like about environmental science but I’m not quite ready to commit to an area of scholarship for a Ph.D., so that’s why I want to pursue a master’s first in hopes that will help me identify a bit further and see where it takes me.”

Likely it will take her on a journey of continued service and scholarship, love and light.

When life is as real and abundant as Kottkamp’s, the future assuredly will be brilliant. 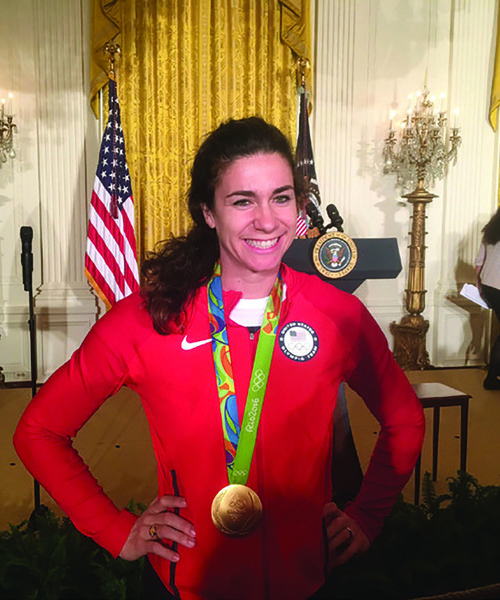 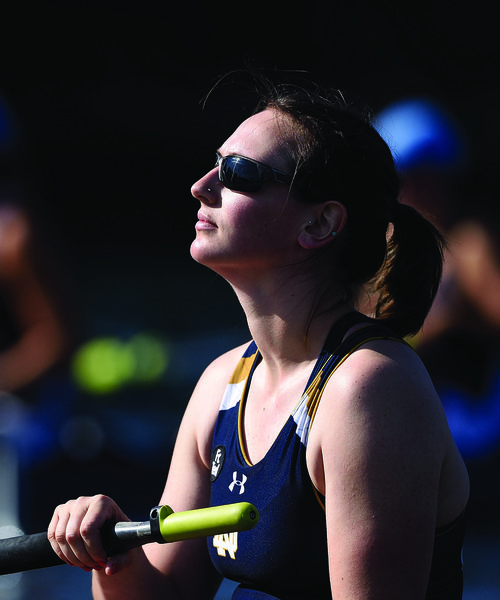