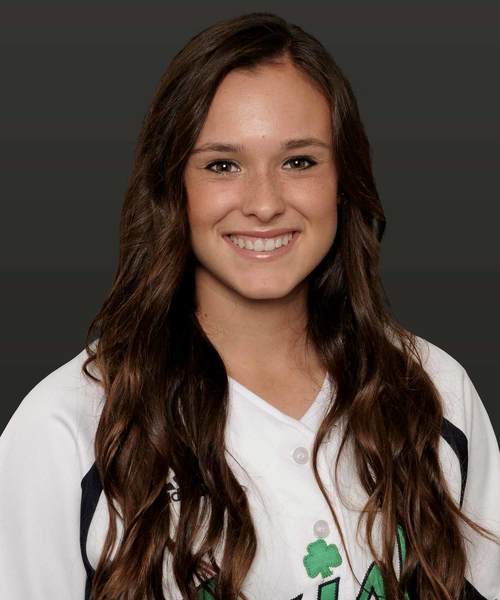 When it came time for Casey Africano to start considering colleges at which to continue her education and play softball, the Huntington Beach, California, native had a multitude of options worth exploring in her own state. UCLA, Fresno State and Stanford, among others, had staunch academic reputations in addition to a history of successful softball programs.

“I knew from the very beginning that I wanted to go somewhere far away for college because I wanted to experience something different from what I had been experiencing in California,” Africano says. “I knew about all the California teams because I grew up watching them. So when Notre Dame came on the radar I thought, ‘Oh, that’s definitely pretty new,’ and it worked out perfectly for me. I couldn’t imagine myself at any other university.”

What she also couldn’t have known at the time was that her decision to go to school and play softball far away from home would end up taking her even farther away from anything familiar that she had ever known. Attending Notre Dame eventually gave Africano the opportunity to spend two months in Ghana during the summer of 2015 teaching high school students through the University’s International Summer Service Learning Program.

“My time at Notre Dame was one of the most challenging times of my life but one of the most amazing,” says Africano, who graduated in May of 2016 with a degree in sociology. “I had an incredible amount of opportunities through athletic academic programs that were offered. I think I found myself in the four years I was there, and I was really able to grow and develop. I couldn’t have done it without the people at Notre Dame. I think we have a really unique group of people there. So it was a mix of a lot of different things. I hit my highest highs and my lowest lows while I was there, and I wouldn’t have asked for anything different. It was definitely hard in the moment, but then after graduation you look back and know you’re better for it. You’re stronger because of it.

“And my trip to Ghana … leaving there was one of the hardest things I ever had to do. It was an incredible experience.”

During four years with the Irish softball squad, Africano split most of her time behind the plate and in the outfield. She first earned starting time as a freshman, logged her highest batting average (.340) in her second season, started a career-high 41 games as a junior and battled through injuries as a senior. Off the field, Africano received the Notre Dame Community Champion Award during her final two years at Notre Dame, making her the first two-time winner of the award which recognizes exemplary community service work. But Africano wanted to do more than just help her local community. She also wanted to travel to another country and, specifically, a developing nation, to use the knowledge she was gaining through her studies.

“I actually applied twice to the International Summer Service Learning Program,” Africano says. “The first time I (wasn’t accepted) but the second time led to my trip to Ghana. I always had this huge respect for different cultures throughout Africa, and I would’ve been happy traveling anywhere on that continent. It’s such a rich culture like so many in the area, but on my application I also focused on Cambodia as well. I wasn’t super particular about where I went. I just wanted to engage with a culture that had seen a lot of challenges and lot of turmoil, and Africa is one of the places I first think of when I think about that.”

Not only did Africano’s major in sociology prepare her for the time she spent in Africa, but so did her minor … one which always had a little bit of a chuckle associated with it.

“My minor is in Africana studies, so anytime I’ve ever said anything related to my degree it was like, ‘Africano and Africana studies. Ha ha, haven’t heard that one before,’” Africano says with a laugh. “So it’s always been a running joke. But I’m proud of my last name. It’s Italian; I can actually trace my heritage all the way back to Scipio Africanus, the Roman general who defeated Hannibal in Africa (in the Battle of Zuma 202 BC). I have a real love for my name, and it just happened that everything unfolded before I got involved in Africana studies and then, ironically, I went to Africa.

“With sociology, though, when I started looking into travel opportunities it kind of played a role in terms of the service part of it and what kinds of things I needed to be thinking about if I did travel to another country,” Africano says. “How do I avoid being ignorant and disrespectful? How do I approach this service opportunity with an open mind where I’m not just this white girl coming in to save all the little black kids? To be quite honest, I did my very best to understand everything I could regarding a particular group experience and, in this case, it was in a place where poverty is very common.

“My studies really helped me understand the cultural environment I was entering and the things I needed to be aware of and the things that I would need to understand that I wouldn’t be able to understand. Living in the U.S. there are things I can never truly understand, so all I can do is approach it with an open heart and know that I’m trying to do my best for the community rather than coming in with (a plan) about how I’m going to change things because that’s not what the program is about. It’s about utilizing what you have while also learning from the person who is in a completely different environment than you.”

When she finally arrived in Africa, Africano lived in Adaklu Helekpe, a village in the western part of the Volta Region of Ghana where poverty is rampant. In addition to teaching English and social studies to local high school students, Africano (along with a partner) also worked to find a sustainable income for the Adaklu Youth Education Committee (AYEC), a nonprofit organization which provides educational and vocational opportunities for young people in the surrounding areas.

“Our main job was to raise funds to cover the expense of providing uniforms for children who no longer have parents or who have a single parent in their home,” Africano says. “Many of these kids are forced to forgo education because they can’t afford uniforms which is a requirement to attend school at any level. Without another form of income from working parents, children have to work during the day and can’t go to school, despite their desire to attend.”

To raise the money, Africano and her partner sent out many letters to family and friends within their immediate circle asking for donations to the cause. They also created a video for their Crowdfunding page. Their efforts raised a significant amount of money which not only covered the cost of the uniforms, but also allowed Africano and her partner to work with the AYEC to find ways to use the extra money to make more money. So they bought a taxi. The AYEC will use it as a regular taxi, and the money earned from providing rides will go back into the organization.

“We wanted to make the money go as far as it could, and we ended up investing in a taxi cab, which allows for profit after about a year. (My partner) did a great job of breaking down the numbers and looking into all the factors that come with covering the cost of a cab. We also used the extra money from the uniform fundraiser to go toward the scholarship program that had been established. The committee finds needy students from the community and covers the cost of their school fees for the academic session.”

By all accounts, it proved a very successful two months for Africano, who learned a thing or two herself during the journey. She recounts one conversation with a young girl from her class in which Africano was on the receiving end of one of those lessons … one which invoked a myriad of emotions.

“While I was there, one of the hardest things was hearing my students’ interpretation of the U.S.,” Africano says. “They actually had a lot of questions regarding race relations in the U.S. because obviously it had been a summer with a lot of turmoil. One day we were walking home and one girl said to me,  ‘When you come to Ghana, we take care of you, we give you shelter, we give you food and we welcome you. But when people who look like us are in your country they’re treated poorly and killed.’ And I just looked at her …

“She was 10,000 miles away on the other side of the world and had limited access to any kind of media, but she was understanding things people won’t acknowledge here in the U.S. That really blew my mind. I was so embarrassed. To be a person from the U.S. and to come into Ghana and be welcomed and be taken care of and be watched over—I was put in a very interesting position mentally in that moment. All I could say was that humans are something I don’t think anyone will ever really understand and all we can do—all I can do—is be conscious of the way we treat people. That’s all we can really ask right now, and until everyone understands that we’re all just humans trying to make our way through life, that’s just kind of how it’s going to be.

“I felt so horrible that I didn’t have an answer for her, but she was so astute to notice something like that and to put it into such simple terms. It was refreshing and horrifying and challenging and something that will stick with me for the rest of my life.”

Africano is now a graduate student at Southern Methodist University in Dallas where she is working on her master’s degree in educational policy and leadership. This will afford Africano the opportunity to “work at a university in a student affairs-type position.” She works eight hours a day in two different departments and then has classes three nights a week. Unfortunately, her paychecks aren’t quite reflective of all the hours she puts in, but that hasn’t stopped Africano from planning a trip back to Ghana. And, despite her physical absence, Africano’s work has left a footprint on the small Ghana village that will hopefully aid its children for years to come.

“I’m currently trying to save money to get (back) there, but I’m a grad student now so my bank account stays pretty low and international trips are pretty expensive,” Africano says. “But I stay in contact with my host (family). I try really hard to communicate with them, make sure they know that I haven’t forgotten about them and that I’m trying to get back. They always tell me to just get my plane ticket and they’ll take care of me. So I always know that I have a family (to stay with) if I ever go back there.

“As much as I remember the experience, the details that really stick out are my relationships with my kids and the students. I miss them more than anything.” 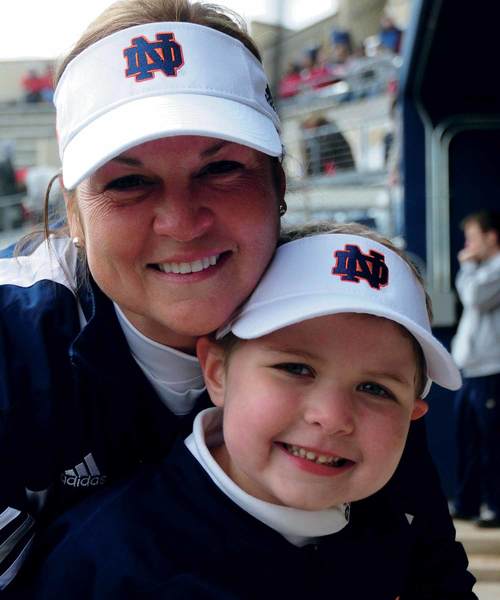 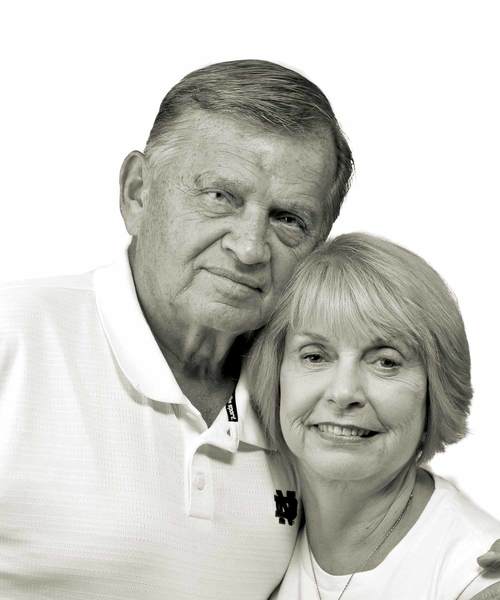