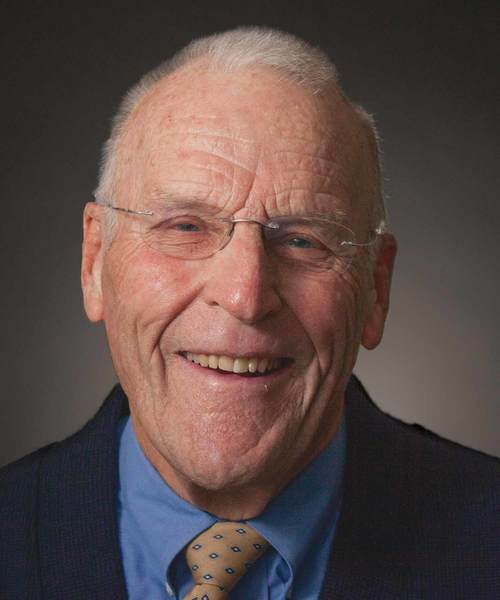 In the days before even those of us technologically challenged could find basic weather information by touching a smartphone, there were two ways you could locate it in South Bend.

You could call a number at a local bank and receive the precise time and temperature.

Or you could call Chuck Lennon’s office at the University of Notre Dame Alumni Association and just hope you got his answering machine. Or you could do both and have the time and temp—and from Chuck the daily forecast, last night’s Notre Dame sports scores, the upcoming games and a list of big events ahead on campus.

The best part of Chuck’s weather forecast was that even if there was a blizzard raging, he made it sound like a very nice blizzard, nothing to worry about and certainly nothing to keep you away from campus. That is because neither wind nor rain nor anything else could ever keep Chuck Lennon from being Notre Dame’s man for all seasons. And he still is, even in his alleged retirement.

For a man who claims he never had, by definition, a job, that all he has been doing is living a dream, he has a résumé that could drain ink cartridges at Kinko’s. For instance, did you know Lennon was a beekeeper and a barber? And he did both those jobs while majoring in philosophy and theology at a seminary. He became a beekeeper and barber because he broke his neck playing football at the seminary.

Chuck is the only person I know who can look back at breaking his neck and call it a blessing in disguise.

Even life’s travails he somehow turns into a challenge that will only make him a better man, husband, father and mentor to others.

It is that mentoring part that is most amazing. Hundreds upon hundreds of Notre Dame graduates have turned to Chuck Lennon when times got tough for them because they know Chuck has faced personal challenges and turned them into what he calls life experiences.

For instance, there is Joan, his bride still today as she was on their wedding day in 1960. It’s safe to say there is no Chuck Lennon as we know him without Joan Lennon. Heck, he still calls her his high school sweetheart (which she was) and part of the reason Chuck decided on a career change at the seminary, even though beekeeper and barber would soon be less desirable objectives.

When Joan was diagnosed with breast cancer Chuck says he really felt sorry for himself, for about 10 seconds. He and Joan gathered the family that night and put together a plan of support with one objective—we are going to beat this. And Joan did, eventually with a double mastectomy and support from so many people the Lennons lost count.

But one thing the Lennons have never lost sight of is making sure there is payback, that they can be more than cancer survivors—that they can be guiding lights to others. Notre Dame graduates by the score have turned to Joan and Chuck for advice or maybe just some strong shoulders to lean on. In fact, on the very day I sat down to visit with Chuck, they were making plans for dinner at home with another couple that was suddenly staring head-on at cancer. The two of them don’t just talk the talk, they walk the walk.

But they had no warning they would have to take the walk personally a second time when grandson KJ was born with cerebral palsy. The doctors had no indicators this could happen, so there they were with daughter Molly and son-in-law Kevin Anderson, staring at another very personal challenge. The experience with Joan taught Chuck the uselessness of saying, “Woe is me.” Instead, all the Lennons dug deep into the mine of a strong family bond to provide KJ a normal loving life. And today KJ is as well known to many at Notre Dame as the leprechaun.

I have known Chuck Lennon since the mid-1960s when he was seemingly an assistant athletic coach for everything and I was a student living in the old Fieldhouse. Yes, it is not a myth like the ghost of George Gipp in Washington Hall, but a student (usually two) always lived in the Fieldhouse along with numerous varmints who roamed the place at night. And unlike the myth of St. Patrick and Ireland’s snakes, it was Chuck who came up with the idea of how to rid the place of the creepy creatures. This little tidbit is not on Chuck’s résumé with a lot of other things, including his first assignment at Notre Dame, mayor of Vetville.

To many, Vetville is lost history at Notre Dame, though it should not be. The student body had been decimated by the draft for World War II and by the time many students decided to resume their education, they were grown men with wives and sometimes families. So the University built a housing complex, roughly where the Hesburgh Library is today, for married students. By the time Joan and Chuck were married, the veterans had graduated and moved on; the Lennons were the last couple. But somewhere there was a codicil that Vetville was semi-autonomous and had to have someone serve as its mayor.

So Chuck “ran” for mayor and presumably won in a landslide with Joan’s vote. That story is important because public service along with devotion and service to Notre Dame is and has been the fabric of his life.

He served on the South Bend school board for many years at a time when the board was often fractured and at odds over just about everything.  He brought common sense to many of the proceedings because his only goal was a good school system, the one his children attended and the one he wanted to be a solid anchor for Notre Dame families to send their children in the future.

But service doesn’t always have to be serious, like the time his phone rang in the alumni office on a home football Friday. It seems the master of ceremonies for that night’s pep rally couldn’t make it, so the caller asked Chuck if he would do it.

Most people would have come up with some excuse for another commitment, which he easily could have done. But not Chuck. He sprang into action, found his old Notre Dame sweater, plus several other props including a megaphone, and off he went. He was a huge hit, so he found himself invited back, pep rally after pep rally, year after year—and when he talks about those days, you can tell by the smile on his face he never had more fun in his life.

To many Notre Dame alumni, the image of Chuck is the guy with the quick handshake, a pat on the back and a shout-out of “Go Irish!” along with an amazing recall of when people graduated. But that image alone actually would diminish what he accomplished at the Alumni Association.

Lennon came up with the idea to focus on the growing diversity of the University with black, Hispanic, Asian Pacific and even Native American sub-groups within the Alumni Association. He was quick to realize the importance of injecting women into important positions at Notre Dame. His background in public and urban affairs led to several alumni volunteer and charity programs that continue today. He also urged former athletes through the Notre Dame Monogram Club to become more involved in University affairs and projects.

After all, who is going to say no to Chuck Lennon?

On his patio on a beautiful summer day in South Bend, I noticed that Chuck was holding onto a sheaf of papers—nothing really organized, just sheets torn out of old notebooks, it looked to me.

It took forever to convince him to give them to me, just in case there was something there that might help me author this piece. It did and a lot more, including giving me pause to think even harder about what is most important in life.

At the bottom of one page there were four quick lines, probably not even Chuck Lennon originals, for all I know. It said simply:

To Leave a Legacy.

We all should be so blessed. Chuck Lennon would want that for everyone in his Notre Dame family.

In hindsight, it probably wasn’t the best question to end an interview—but there could not have been a better answer.

It speaks to all that Lennon accomplished in more than a half-century at Notre Dame, 30 of those years as executive director of the Alumni Association. The Joliet, Ill., product also spent a handful of years as an Irish assistant coach in both baseball and basketball—and he earned two monograms in baseball, while also serving as president of his Notre Dame senior class.

I asked Chuck what he would like written on his tombstone.