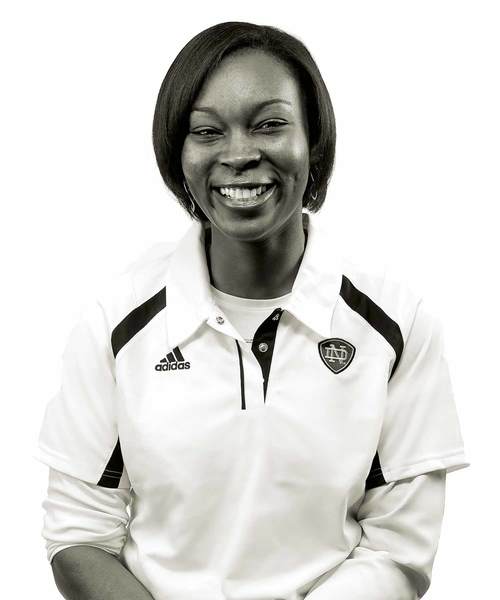 She knows what sacrifice is all about

The word “hero” is tossed around so casually in sports that its true meaning is inevitably diminished.

Like much of sport itself, “hero” derives from the ancient Greeks. Webster’s defines a hero as “a man of distinguished courage or ability, admired for brave deeds and noble qualities.”

A game-winning hit, a last-minute touchdown or a buzzer-beating shot might well qualify as a brave deed under the right circumstances, embodying, perhaps, the noble qualities of the athlete responsible. “Hero” thus becomes a convenient label, easily understood. Yet it is so commonly used, so automatically applied, that it becomes an inadequate measure of the real deal.

A real hero. A Danielle Green-Byrd.

Green, 33, is a former Notre Dame basketball standout who lost her lower left arm and hand when she was wounded by a rocket-propelled enemy grenade while serving with the U.S. Army in the Iraq war in May 2004. Pity, though, is wasted energy. As she rebuilds her own life, she is putting her experience to work as a readjustment counselor for the Department of Veterans Affairs, helping fellow service vets cope with the physical and psychological trauma they have encountered on the battlefield.

“I’m probably too new at this to say whether it’s a calling,” Green says  during a break from a symposium on coping mechanisms she was attending at a suburban Chicago hotel. “But I’m finding some comfort in what I’m doing—it feels like the type of work I should be doing at this time in my life. I can relate to what these guys have been through. Hopefully, they see that in me.”

Green read and heard of her on-court “heroics” while she was tearing up the Chicago Public League as a 5-foot-8 guard at Roosevelt High School, a high-scoring, left-handed dynamo. But she never paid much attention, lest her focus waver from her lifelong goal of earning a degree from Notre Dame, with basketball as the facilitator.

“I used to watch the football games on television all the time,” Green recalls. “Notre Dame just seemed like a special place. I felt like I belonged there.”

It was an unlikely destination for a disadvantaged teen who lived with her grandmother and practically raised herself on the meanest streets of Chicago’s South Side, the daughter of a distracted single mother who struggled with substance abuse.

Green’s voice turns quiet and her strikingly lively eyes soften a bit as she remembers that girl, who may have been neglected but was hardly helpless. If Green was deprived of material things and maternal nurturing as she grew up, she was blessed with a relentlessly strong will and a desperate determination to set goals and achieve them, her bridge from then to now.

“I think the resiliency I learned growing up helps me deal with where I am now and in my work,” Green says. “I saw my mother self-destruct, and I wanted to break that cycle. A Notre Dame education was a way to do that.”

Green entered an overwhelmingly white, Catholic, privileged world when she enrolled at Notre Dame. For a wary youngster hardened by the Chicago streets, it was not the easiest transition.

“It was a welcoming place for the most part,” Green says, “but there was some self-doubt. I wondered if I was good enough.”

Not for the basketball team, but for the Notre Dame environment. “Every other kid on the team had a mom and a dad,” Green says. “I felt like an oddball at times.”

Dr. Mickey Franco, a sports psychologist, helped Green overcome her feelings of alienation—she has borrowed some of his methods in dealing with her own clients’ issues. Eventually, her toughness, drive and versatility won over coach Muffet McGraw, and Green became a productive contributor for the Irish, averaging 9.5 points and 4.5 rebounds for her career, which stretched over five years because of a ruptured Achilles tendon that cost Green her sophomore season.

“Coach McGraw was very patient with me—I wasn’t the easiest kid to coach,” Green says. “I was moody, very stoic. Looking back, I wish I would have let myself have more fun playing. My approach was all business, like a job, and the product was winning games.”

Green graduated with a degree in psychology in 1999. She moved back to Chicago and taught in grammar school, helped coach the Washington High School girls’ team, and took some graduate-level education courses, but she couldn’t shake the feeling that something was missing from her life, that one of her goals remained unfulfilled.

“I always wanted to serve my country,” she says quietly. “That’s why I joined the Army.”

Green had been involved in the ROTC program at Roosevelt and, with her Notre Dame degree, she was a natural for Officer Candidates School. But she chose to enter the service as an enlisted person in 2003.

“I didn’t feel qualified to lead troops in war,” she says. “If I was going to be an officer, I wanted to work my up through the ranks. I felt the people under me would respect me and trust me more if I did it like that.”

Green was attached to the 571st Military Police Company, which deployed to Iraq in January 2004, shortly after her marriage to Willie Byrd, a longtime teacher and coach in Chicago public schools. On a scorching hot May 25, Green’s unit came under enemy fire while guarding an Iraqi police station about five miles outside Baghdad’s International Zone. Green neither saw nor heard the rocket-propelled grenade that crashed into the wall behind her post on the building’s roof, close enough to tear off her left arm just below the elbow when it exploded. She suffered severe wounds to her upper left arm and left thigh as well.

“If it had hit me directly, I wouldn’t be here,” she says quietly. “But it was close enough to do some damage. When I came to I had this terrible ringing in my ears, but I knew I wasn’t dead. And I could feel my legs, so I figured I wasn’t paralyzed. But I couldn’t really move, and the pain was terrible, unlike anything I had ever felt.”

As Green’s comrades were preparing her evacuation, a sergeant returned to the roof to retrieve her wedding and engagement rings from her severed hand. He put them on her right hand just before she was placed aboard a helicopter and flown to a military hospital. Green smiles at the memory. “I didn’t want my husband to be paying for rings I wouldn’t be wearing,” she says.

Green was evacuated to the Landstuhl Regional Medical Center in Germany, then transferred to Walter Reed Army Hospital for eight months of treatment and occupational therapy. She felt blessed to encounter some familiar faces in Germany, Notre Dame friends Dave and Eileen Woods, who happened to be there visiting their son Tim, an Air Force surgeon stationed at Landstuhl. They were a calming, reassuring presence as Green dealt with the reality of what had happened to her.

“Mr. and Mrs. Woods were visiting their son, who was one of the doctors treating me,” Green recalls. “They were from South Bend, and I used to see them all the time—they were involved with Notre Dame through the Fast Break Club. They came to see me as soon as they heard I was there. They called my husband, they called Coach McGraw … what a blessing to have them there to help me. Notre Dame is everywhere.”

Four months after arriving at Walter Reed, Green joined a group of fellow vets for the five-mile Hope and Possibility Run through New York City’s Central Park. The process of resuming a “normal” life was well under way when she left the service on Dec. 7, 2004.

Returning to Chicago, she completed her master’s degree in counseling and worked in sports administration for Chicago Public Schools and at Malcolm X Community College, a natural career path given her background and interests.

“Vietnam was an unpopular war, and there were no services available for these men when they came back—post-traumatic stress disorder wasn’t even diagnosed until 1983,” Green says. “A lot of them were boys when they went off to war—18, 19, 20 years old, and that’s where they still are from a developmental perspective. Some of them just want to be heard, listened to. They want to know somebody cares. I want to be a symbol for them. They don’t deserve to suffer.”

Green had to deal with her own “why me?” issues before she could become an effective counselor. “I lost an arm. I saw a lot of people at Walter Reed who were much worse off than I am.”

She is taking courses in family therapy and substance-abuse counseling in order to gain a better understanding of the people she is serving.

“There’s no self-pity here,” she says. “God could have taken me, but he gave me a little more time to live, to fulfill the mission.”

Away from her suburban Chicago office, Green bicycles, she runs, she plays golf, she’s learning to fish. She’d like to start a family. “That would complete the circle,” she says.

Her wobbly right-handed writing and the challenges of previously simple tasks like getting dressed are reminders that “I’m a work in progress,” Green says, smiling. “I was probably a 95 percent left-handed person, so I’m reinventing myself.

“I remember one conversation with Coach McGraw. ‘You always told me I needed to develop my off hand, use my right hand more,’” I said. “Guess what I’m doing?”