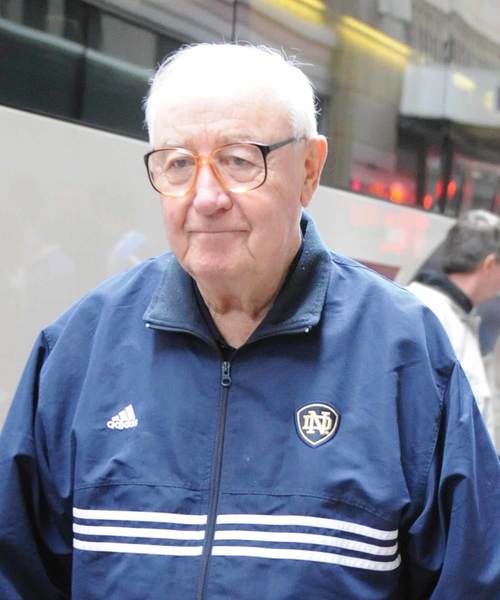 He lived for Irish hoops

Watch a University of Notre Dame men’s basketball road game on television back in the 1980s and you could identify the usual suspects on the Irish bench.

There was head coach Digger Phelps and his assistants. You knew all the players by their uniform numbers or by recognizing their faces. There were a couple of student managers, trainer Skip Meyer, chaplain Rev. Jim Riehle, C.S.C.—and then there was often another guy at the very end of the bench.

Turns out that was Ed O’Rourke, the man who may have seen more Notre Dame men’s basketball games live and in person than anyone in history.

From the Johnny Jordan era in the 1950s through the 2011–12 season under Mike Brey, O’Rourke—who passed away last June—could be found at virtually every basketball game the Irish men played, home and away.

For O’Rourke, a 1949 Notre Dame graduate, the relationship went all the way back to Jordan, who coached O’Rourke in basketball at Mt. Carmel High School in Chicago. Once Jordan took over as Irish head coach in 1951–52, O’Rourke did a little scouting and recruiting—once bringing Tom Hawkins and Hawkins’ mother on a recruiting trip to the Notre Dame campus.

It became love at first sight.

O’Rourke, who never married, virtually adopted the Notre Dame program over the next six decades. He’d travel with the team on occasions and sometimes find his way to road games on his own. He would often frequent team meals, and you’re not likely to find a player on any of those teams who wouldn’t say that O’Rourke was both a friend and a confidant.

How dedicated was O’Rourke? For 20 years he didn’t miss a single game, home or away. At home games he’d normally sit in his seats, for years with good friend Hal Motts and later with Joe Costello and wife Marie.

So all those years you thought the Notre Dame head coach was sitting in the locker room during warm-ups worrying—when in reality he was probably chatting with O’Rourke.

“My first year I met him at a football game and (associate athletic director) Roger Valdiserri told me who Eddie was and how he has been so loyal to Notre Dame basketball for all these years,” says Phelps.

“That’s all I needed to hear. I would introduce him as Dr. O’Rourke, our team psychologist.

“In (Madison Square) Garden one night, one of the referees, I think it was Mickey Crowley, came over and said, ‘Digger, tell the priest on the end of the bench to knock it off or I’m going to give the bench a technical.’

In 1978 when a blizzard virtually shut down South Bend, Notre Dame played host to Maryland on a Saturday afternoon and fans were allowed into the Athletic and Convocation Center for free since all the local roads were closed. O’Rourke somehow made it to the South Bend exit on the Indiana Toll Road, then followed a snowplow all the way to the arena. When he walked into the Irish locker room, jaws dropped in amazement.

Former Irish star Bill Hanzlik invited O’Rourke to spend the night in his Pangborn Hall room the night before a Notre Dame home football game in the fall of ’78. O’Rourke was assigned to the lower bunk—meanwhile Hanzlik’s roommate and owner of the upper bunk

poured two glasses of water on his mattress, then flipped it over. Hanzlik, O’Rourke and their group returned late that night and went to sleep. About 5 a.m. O’Rourke awoke, convinced he’d had an “accident.”

“We had some great laughs as Eddie shouted some choice words to us about what a rotten thing that was for us to do. Ed was a master of Irish pranks, but this one time we got him,” says Hanzlik.

Another time O’Rourke invited former Irish player Gilbert Salinas to play golf at Olympia Fields Country Club. Salinas, at 6-11, proved to be an unlikely-looking golfer and his play hadn’t exactly impressed O’Rourke. Finally, after 17 holes, Salinas admitted that he actually was left-handed— which certainly explained why he was struggling with a set of right-handed golf clubs.

If O’Rourke were still around, he’d tell you about the Monday night game against Providence in 1985 when into the locker room before the Irish game walked Butch Waxman from Logan Center, who was the “star” of the local Special Olympics team that annually took on Phelps and the Irish.

Remembers Phelps, “We’d lost at Maryland the previous Saturday and Butch starts talking and says, ‘Why’d you lose to Maryland?’ And I said, ‘We stunk.’ So I said, ‘Don’t tell me about it, tell the team when they come in here.’ Well, now Eddie is shaking his head and thinking, oh my god, here we go.

“So the team comes in and I said, ‘Butch is gonna give the pre-game talk.’

“So Butch starts talking and he’s pointing at (Ken) Barlow and calling him (Tim) Kempton—he points to the Providence stuff on the board, but it was our stuff. So we go out on the court and O’Rourke is still laughing.”

Butch grabbed a seat on the Irish bench at halftime and the second half wasn’t 10 seconds old before he yelled “Timeout!”

“Meanwhile, O’Rourke can’t believe any of this is happening,” says Phelps.

“We finally win the game and we’re all in the locker room and Ed is sitting there and 10 seconds later Butch comes in high-fiving everybody and telling everybody that he coached and we won the game. And Eddie is absolutely dying.”

Born in the Hyde Park area of Chicago, O’Rourke moved to the South Shore area after World War II. After his graduation from Notre Dame, he went to Northwestern University Law School, served in the U.S. Army for two years and spent more than 30 years in the Illinois National Guard. He worked at the Wyatt Company (a Chicago actuarial firm) his entire adult life as a corporate officer and General Counsel until he retired at age 55. In 1973 he moved to Flossmoor, Ill., and in 1992 he moved into an apartment over the clubhouse at Olympia Fields.

While O’Rourke’s avocation may have been Irish basketball, he made a variety of other behind-the-scenes contributions. He took over the caddie program at South Shore Country Club, often took groups of boys to Chicago White Sox baseball games and made sure they had the funding for high school books and tuition. He became connected with Glenwood School for Boys (in Glenwood, Ill.), donating both money and time.

Connected with the Evans Scholars caddie program at Olympia Fields, O’Rourke anonymously assisted dozens of young men with their schooling goals. He secured enough tickets for the 1974 Notre Dame win that ended UCLA’s record 88-game win streak that he was able to bring a busload of caddies to the game (one of them was Jack Cooley Sr., father of the current Irish senior standout).

In tribute to the manner in which O’Rourke tied together decades of Irish players and coaches, the current basketball program in November 2011 put up a mural on a wall in the Notre Dame Purcell Pavilion locker room, recognizing Eddie’s longtime affiliation. It happened, fittingly, on a Notre Dame basketball reunion weekend when more than 200 former Irish players returned to campus.

As current coach Brey noted at the time, “As head coach, when you’re in the locker room before a big game, it sometimes feels like you’re on an island. Ed has always been there for me through those moments. I appreciate his advice, his friendship and all he has done for Notre Dame basketball through the years.”

O’Rourke enjoyed particularly close relationships with a handful of former players, among them Bill Laimbeer, Hanzlik, Mike Mitchell, John Paxson and current assistant coach (and former point guard) Martin Ingelsby—and on occasions was able to offer some contract help to some of those in the NBA based on his legal background.

“He is one of the most caring and selfless people I have ever known. The Notre Dame tradition about caring for others was totally exemplified in Ed O’Rourke’s life,” says Hanzlik.

More than anything, O’Rourke simply enjoyed being around those involved with the Notre Dame program.

“Eddie O’Rourke was Notre Dame basketball. He loved it, dreamed it, believed it and he was always loyal,” says Phelps.