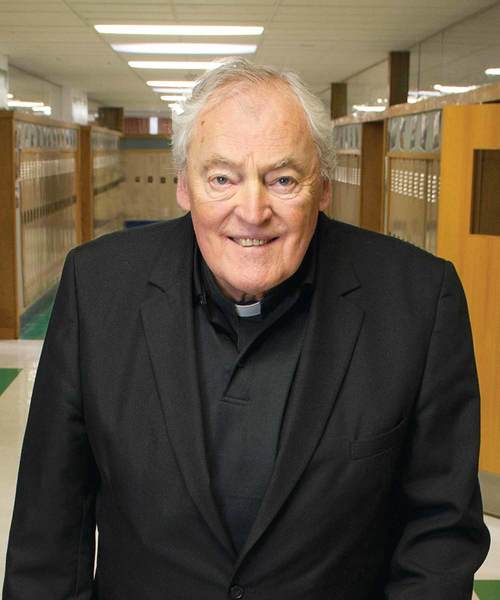 A lifetime of service

In John Smyth’s case, “rugged” went with “forward” like cookies with milk. Smyth, with just a hint of a gleam in his eye, doesn’t deny that the gym shoe fit during his three years with the University of Notre Dame varsity basketball team from 1954–57.

“I broke a few noses,” he says, somewhat apologetically.

“I was Tommy Hawkins’ protector,” Smyth says of a senior season in which he averaged 19 points, 15 rebounds and just about four fouls per game as Notre Dame’s captain and designated hitter.

“If you ran into John in the post, it was like running into a tree,” former teammate Lloyd Aubrey says.

Little did Smyth know that the role of protector would become his life’s work.

African-Americans were still a rarity in the college game during that 1956–57 season, not always welcomed and hardly embraced. Teams often resorted to strong-arm tactics in an effort to knock Hawkins off his elegant, explosive game.

“I could jump like a pogo stick, but I was built like one, too, and Johnny looked out for me,” Hawkins said. “He was a good athlete, a great competitor and a tough, tough guy. If a fight broke out anywhere on the floor, you wanted Johnny on your side.”

With Smyth running interference, Hawkins averaged a high-flying 20.6 points and 17.3 rebounds as the Johnny Jordan-coached Irish went 20-8 and earned a bid to the NCAA Championships, reaching the Mideast Regional semifinals.

“We’d been 9-15 the previous year, so it was great to bounce back and have a good season.”

More so than the team’s record or his own impressive stat line, an off-court incident helped set the course for John Smyth’s future.

“We were invited to New Orleans to play in the Sugar Bowl Tournament as the defending champions,” he says. “There were segregation laws on the books in the South back then, and we were told that Tommy Hawkins couldn’t stay in our hotel, and we couldn’t stay in his. I was team captain, and this was unacceptable. Tommy was one of us. If he couldn’t be with us, we shouldn’t go.”

Smyth had been MVP of the Sugar Bowl Tournament as a junior, but he and his teammates were adamant. Jordan and the Notre Dame administration supported the players’ position, and the Irish chose not to defend their Sugar Bowl title.

Instead, they traveled to New York for the Holiday Festival, where a bare-knuckles battle between Smyth and Holy Cross’ rugged star Tom Heinsohn got the St. Louis Hawks thinking they might have found a guy to shield scoring star Bob Pettit from NBA rough stuff. The Hawks drafted Smyth in the third round that spring and offered him a substantial signing bonus, “more money than I ever thought you could make playing basketball,” Smyth says.

But he’d had a taste of the pro-hoops lifestyle while traveling with a college all-star team after the season, and it wasn’t for him.

“It was fun, but it wasn’t a livelihood,” Smyth says. “I was looking for something different.”

Enrolling at St. Mary of the Lake Seminary in Mundelein, Ill., to begin training for the priesthood proved off-the-charts different, especially for a hard-nosed, ultra-competitive athlete known for his take-no-prisoners toughness.

“I wasn’t that way off the court—at least I hope I wasn’t,” Smyth says with a wry smile.

“There wasn’t a lightning bolt or anything really dramatic about my vocation. I’d been thinking about it for a while. I decided to try it, and I liked it.”

Smyth would sooner have taken on Wilt Chamberlain one on one in the low post than study Latin, and his struggles with the ancient language almost silenced his calling.

“The archdiocese threatened not to ordain me because I hadn’t passed Latin,” Smyth says ruefully. “I tried to tell them that not knowing Latin didn’t make me a bad person, and it wouldn’t make me a bad priest. They finally relented, with the understanding I’d go back and take the Latin courses I needed. I never did. I was a very happy guy when Vatican II came along and we started saying Mass in English. I knew what I was saying.”

Father John Smyth intended to become a parish priest, but his first assignment following his 1962 ordination turned out to be a life-altering experience for him, as well as for thousands of Chicago-area youngsters. He was sent to Maryville Academy in Des Plaines, Ill., to assist Monsignor George Halpin in running an archdiocesan-sponsored social-services facility for abused, neglected and otherwise disadvantaged children from the Chicago area.

A one-time orphanage founded as St. Mary’s Training School for Boys in 1883, the institution had been “rebuilding lives, rekindling spirits and renewing hope” for nearly 80 years. Girls were admitted in the 1920s, and the name was changed to Maryville in 1950.

In part because of his sports background, Father Smyth was assigned to teach, coach and supervise the Maryville youngsters. He also involved himself with intake, and an enrollment increase was no coincidence—for all his on-court ferocity, the rugged power forward was at heart a gentle, compassionate giant who simply couldn’t turn his back on a child who needed help.

“The police would show up with a kid they’d pulled off the streets or out of a bad situation at home, [asking,] ‘Can you take him?’ I would, and if we couldn’t help him we’d find a place that could.

“I didn’t think we should ever say no. In the Gospel, Christ said, ‘Let the children come to me.’ He didn’t say, ‘Not that one’ or ‘Not the one with the criminal record.’  There were a lot of damaged kids out there.

I had to be at the front door to help them.”

Father Smyth had begun to believe that working at Maryville was his true calling, and when Monsignor Halpin left for another assignment in 1970 he was appointed executive director. Fixing broken lives was only part of the challenge. Maryville was on the ropes financially, so fundraising became an essential part of the job. His boss, Cardinal John P. Cody, told Father Smyth he had one year to get Maryville on sound fiscal ground or it would close.

“One year and you’re on your own,” Father Smyth says.

“It wasn’t what I wanted to hear, but I appreciated the Cardinal’s honesty.”

Father Smyth approached fundraising with the same zeal he had employed as a rebounding maven at Notre Dame. He was into “networking” before it became a corporate buzzword and tapped into contacts he’d made in sports, business and politics. Maryville not only survived, it thrived. Over time, 15 satellite facilities, including a summer camp in Eagle River, Wis., were opened to complement the Maryville Youth Center in Des Plaines.

Ever the active, athletic kid, Father Smyth remembers Maryville’s Wisconsin camp with a special fondness. “Ray Meyer’s basketball camp was our neighbor. I’d go over there to say Mass on Sundays, and we had some very competitive softball games.”

Meyer, DePaul’s iconic coach for 42 years and a Notre Dame graduate, became “a great friend,” even though Smyth had spurned the Blue Demons for Notre Dame after playing high school ball on Meyer’s doorstep at Chicago’s DePaul Academy.

With help from Meyer and countless other friends, Father Smyth raised millions so Maryville could provide as many as 1,500 youngsters with a safe, healthy environment in which to live, as well as an education. A full range of social services included emergency shelters, substance-abuse treatment centers, homes for teenage mothers and a psychiatric clinic.

“I called him ‘Father Dad,’ and I still do,” says Stephanie Winter, who spent eight of her adolescent and teenage years at Maryville after her mother died and her father struggled with raising her and three siblings.

“Maryville was like family for us. We were loved and cared for and made to feel ‘normal’ as we grew up. We’d go to summer camp and learn to swim and ride horseback and do all the things ‘normal’ kids were doing.”

Winter lives in Atlanta and can’t attend as many Maryville reunions as she would like, but she stays in touch with Father Smyth and rarely makes a decision without consulting him.

“He transformed my life and redirected it,” she says.

Father Smyth believed that an education was the foundation for a responsible, productive life. A good portion of the money he raised went to scholarships for Maryville residents who graduated from high school and qualified for college admittance.

In 2003, Illinois Governor Rod Blagojevich’s administration withdrew state funding for Maryville, declaring its preference for foster care as a better, cheaper placement option for wards of the state. After 41 years of selfless, devoted service to Maryville and its children, Father Smyth stepped aside as executive director.

His “break” lasted about as long as a 20-second timeout. Father Smyth started the Standing Tall charitable foundation and enlisted his old contacts to support scholarships and other programs dedicated to assisting disadvantaged youth. Amid a list of honors long enough to match his 6-foot-6 frame, he is both a member and a board member of the Chicagoland Sports Hall of Fame, which supports the Standing Tall Foundation. Presiding at the weddings of Maryville alums, or baptizing their children, brings him special joy.

In 2007, Father Smyth became president of Notre Dame College Prep High School. The all-boys institution in west suburban Niles, Ill., hit a rough patch when the Congregation of the Holy Cross religious order ended its affiliation, but under Father Smyth’s leadership the school is flourishing, with more than 900 boys enrolled and ambitious plans for campus expansion in the works.

Father Smyth is 78, and maintains a schedule that would tax the stamina of a man half his age, but he finds time to help coach the Dons’ football team, though he gripes that recovering from hip-replacement surgery hinders his movement.

In one sense, working with teenagers at “Notre Dame” closes the circle for Father Smyth. The university had a profound influence on his life, and he would like to return the favor, as if he hasn’t already.

“I’m not such a rabid fan that I don’t see some flaws, but it’s a unique place. I got a great education, I met some wonderful people, and I developed a special relationship with the Blessed Mother, for which I’ll always be grateful. I was a regular visitor to the Grotto,” he says.

“Notre Dame did more for me than I ever did for Notre Dame.”