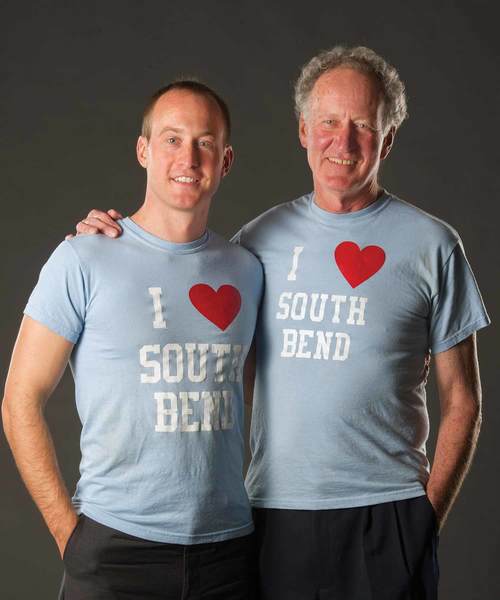 Perhaps the idea of running for political office had been percolating for a while.

But orthopedic surgeon and former Irish basketball team physician Dr. Fred (a 1968 University of Notre Dame graduate) Ferlic and his son Gavin (a 2004 Notre Dame graduate and former Irish golfer), a local businessman, say they began seriously prodding each other to throw their respective hats into the ring for South Bend Common Council in 2011 after the city they call home was labeled “dying” by both Newsweek and The Wall Street Journal.

“South Bend was at a tipping point,” the elder Ferlic said. “I recognized that there was a group of young people who had made a commitment to enhance the city and improve it. I wanted to support that leadership and help move us forward, not backward.”

Gavin remembers father and son cajoling each other to run, but in the end, they both reached their decisions independently.

“The opportunity to serve on the Common Council offered the chance to help the city and institute needed changes,” the younger Ferlic said. “I felt like we could both make a valuable contribution.”

So, they decided to wade into the political waters—Gavin for councilman at large, and Fred as the representative from the fourth district on South Bend’s northeast side.

Then the pair enlisted the help of sister/daughter Beth, now the assistant director of stewardship programs for the University’s department of development, to run both campaigns.

“Both campaigns were definitely grassroots,” Beth explained. “They each had a core committee that was bolstered by a group of incredibly committed volunteers. We made it fun. We met over food (South Bend restaurants only), considered any zany idea, including Gavin running a marathon around the city to raise money for Big Brothers/Big Sisters (which he did) and went to every fish fry and church gathering we could find. All three of us have the gift of gab—perhaps our Irish heritage coming through so we’d have a blast meeting with people from all walks of life, hearing their stories, what was important to them.”

“For Gavin’s campaign, we stayed pretty organized—planned his schedule, worked closely with the media,” Beth said. “With my dad, it was definitely fly by the seat of our pants. If there was an opportunity at 9 p.m. to meet people and it was 8:45 p.m., we were there.”

Anyone who knows the Ferlic family understands that public service is part of its DNA.

“We had these wonderful debates in our household when I was growing up,” said Gavin, who, along with his older sisters Katie and Beth, attended Stanley Clark School and Marian High School. “As the youngest, I always had to bring my ‘A’ game to the dinner table so I didn’t get annihilated. I had to know my facts and be able to make my case.

“Politics came to life in our house. My parents were active participants in the campaigns of Tim Roemer (a former six-term congressman from Indiana’s third district), Joe Kernan (longtime South Bend mayor before becoming Indiana’s lieutenant governor and then the state’s 48th governor) and Evan Bayh (who served two terms each as Indiana’s governor and senator). I saw firsthand the hard work and commitment needed to tackle those challenges.”

“There was a political discussion in our house every single day,” Fred reiterated. “Our kids were only allowed to watch television on Saturdays, so they read and we talked about what they read.”

Gavin’s mother Mary Ferlic, a 1970 Saint Mary’s College graduate, also set the community service bar high for her children and expected them to follow her lead. She taught social work at her alma mater and was instrumental in bringing hospice services to South Bend. The list of local organizations that utilized her time and fundraising talents grew every year.

“My mom was convinced that people wanted to be asked to give money,” said Gavin. “And she never had a problem convincing them the cause was worthy.”

Mary helped raise funds and offered strategic advice for Gavin’s campaign for Common Council, but she passed away before the November election, losing a long and hard-fought battle with breast cancer in May 2011.

“She would have been very proud, but I’m glad she was active in the campaign and lived to see us win the primary,” Gavin said.

Despite the Ferlic family’s longstanding commitment and volunteer work in the South Bend community, some outsiders were perhaps puzzled why both father and son entered the world of city government at this time of their busy lives, especially when the wheels of politics can move frustratingly slow. After all, Fred, now 67, was just beginning to think about reducing the long hours and grueling schedule of his active medical practice, and Gavin, who has an MBA from Indiana University’s Kelley School of Business as well as a law degree from its Maurer School of Law, boasts a résumé that could take him almost anywhere.

“I love South Bend,” Fred said proudly. “I know I can make a difference. It’s so rewarding to get my hands dirty and work with the people in my district and do things that help improve everyone’s quality of life.”

After graduating from Notre Dame, Fred, a native of Carroll, Iowa, attended medical school at Cornell University and then did his surgical residency at the University of Minnesota. He returned to South Bend in 1979.

Gavin, a former captain of the Notre Dame golf team, served as president of the student-athlete advisory committee as an undergraduate. Before pursuing his joint MBA/JD degree at Indiana (becoming only the second person in the program’s history to graduate in three years), he spent two years competing on the professional golf tour. He now serves as vice president of corporate affairs at Burkhart Advertising, Inc. However, there is no doubt in his mind that South Bend is where he wants to be.

“I’ve always loved South Bend,” Gavin said. “My family is here, my friends are here. It’s a fantastic community. South Bend is the perfect size. It offers arts and entertainment, has great schools and hospitals and is in a wonderful location. I would not want to live anywhere else.”

Despite their enthusiasm and belief that South Bend is a city with a bright future, they both know the challenges ahead are daunting.

“South Bend needs to create an environment that’s focused more on business,” said Fred, who made a campaign promise to serve one four-year term. “We need to attract economic development to our community because providing good jobs will improve the quality of life for all our citizens.

“South Bend’s new leadership has lots of energy. We need to understand the direction these young people want the city to take and embrace it and participate in it.”

Although the Ferlics, both elected as Democrats, often agree on most issues, they chuckle at the idea of a “Ferlic” factor on crucial votes.

“We generally see eye to eye, but there are times when we disagree and we aren’t afraid to disagree,” admitted Gavin. “We have different personalities and approaches to the way we work.”

“As a surgeon, I’m used to making decisions quickly—often in an emergency situation,” Fred said. “Gavin is much more patient and diplomatic. He’s a good mediator and arbitrator—he listens to both sides and can remain calm and objective.”

But the son also sees strengths in his father’s feistiness.

“My dad is easy to get along with and very hard working. He knows about 75 percent of the people who live in this area. He’s very strong willed, and yes, sometimes he needs a better filter. But, that’s also one of his strengths—he’s not afraid to say exactly what he thinks.”

Since taking office in January 2012, the Ferlics point with pride to several positive developments within the city, spurred in part by their roles on the Common Council.

Just a few months after taking office, they helped enact Bill 9-12, which amended the city’s human rights ordinance to make it illegal to deny people access to education, employment, housing and public places based on their gender identity and sexual orientation. The controversial measure, which passed the council by a 6-3 vote, had been defeated twice before in 2006 and 2010.

“With that law, we now offer equal protection for all of our citizens and prove that we are a welcoming city,” said Gavin.

Gavin, who went to grade school with South Bend Mayor Pete Buttigieg, also serves on a committee whose goal is to double the number of mentors for young people in the community to more than 1,000 within the next two years by partnering with Big Brothers/Big Sisters of St. Joseph County and the South Bend Education Foundation’s Mentoring Dream Team. Gavin has been a Big Brother for over seven years in both South Bend and Bloomington and also volunteers as a mentor with the Education Foundation’s mentoring program.

The Ferlics, who both donate their $17,000 annual salaries for serving on the Common Council to neighborhood and city programs, also have worked to develop a single point of contact for businesses interested in relocating or investing in the city.

“We need to make it easier to support private enterprise here so we can employ more and more citizens in good jobs,” said Gavin.

“We have over 300 nonprofits in this community, so Michiana pretty much has the market covered in the social justice area,” said Fred. “The city’s biggest challenge is making South Bend business friendly and supportive.”

As Fred and Gavin continue their efforts to make South Bend a thriving small city, they still lean on the lessons they believe they learned as undergraduates at Notre Dame.

“The University instilled certain values in me,” said Gavin. “I learned that I had an obligation to improve the lives of others—of those less fortunate. I saw lots of people at Notre Dame who embraced that mission, who dedicated their talents to serving others.”

“Father Hesburgh always said, ‘Life is a people business,’” said Fred. “There is nobody more principled.”

So, while the Ferlics, now nearly halfway through their first (and as Fred says, his only) four-year term, agree their venture into the political world as had its ups and downs, joys and frustrations, they remain dedicated to making their hometown the best place it can be.

They truly do love South Bend.