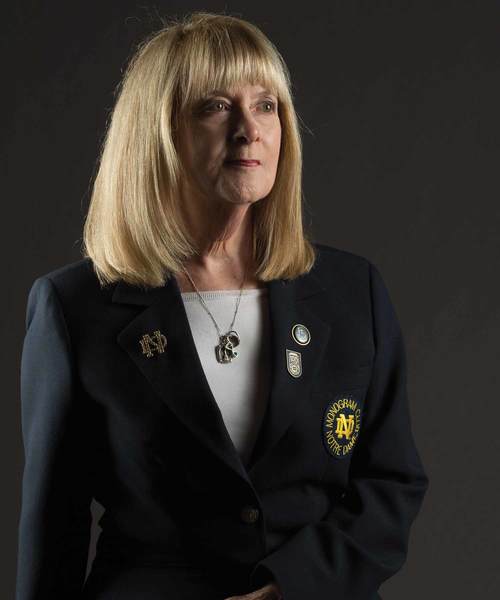 Jo Minton was on the verge of beginning the next chapter of her life when she received some less than encouraging words. But instead of buckling under the negativity, she let it serve as motivation.

“I was a girl from a small town in West Virginia where my Baptist preacher shook my hand one evening after church and said, ‘You will not become anything special.’ I don’t know why he said that …  and I left the next day for West Virginia University to prove him wrong.”

And did she ever. Minton received her bachelor’s degree, got married and had twin daughters before her family would eventually settle in Elkhart, Indiana. She would go on to become the cheerleading coach at Notre Dame, a position she held for 22 years until her retirement in April 2016 and, along the way, she would become part of a second family that would help her through the lows (a battle with breast cancer and the loss of her husband) and the highs (a celebration of new love) of a very successful life.

“Nowhere but Notre Dame … I believe magical things happen when you come here,” Minton says. “However, never did I believe it would come to all of what I have experienced and lived through which has led to this extremely happy life I have now.”

When Minton first interviewed for the cheerleading position after the urging of a friend, it was for an assistant to the head coach, handling practices four nights a week and all home games. Within six months, Minton had been promoted to the top position, one which was still part-time at that point and carried with it an annual salary of $1,000. She converted a small cubbyhole in the Joyce Center to an office with a phone and a computer and, in the summer of 1994, Minton dug into her work.

“Over the summer while the students were gone, I set my sights on learning the field of cheerleading better,” says Minton who had been a cheerleader in high school. “I did this by going to as many camps around the country as possible, networked with the other college coaches in this field and went to many exam reviews to receive the certifications needed to do this job. In addition to the camps, I signed up for several classes on campus put on by human resources to expand my knowledge of communication, organization, speaking, creating challenges for the students, leadership and more.”

Having cheer squads that were engaging and entertaining during games and, most importantly ambassadors for the University, was definitely a big part of Minton’s job. But a lot of her work happened behind the scenes as well. Among other things, Minton contacted vendors, designed a lot of the early uniforms, worked on budgets, made travel plans for away football games, set up community visits and talked to alumni clubs.

Under her direction the cheer team eventually expanded from nine total couples to 16, and two more leprechauns joined the group. Instead of just football, the cheer squads now also covered home games and postseason games for men’s and women’s soccer, volleyball and men’s and women’s basketball. With practices four nights a week for two hours, pep rallies or travel on Friday and games on Saturday, Minton had her hands full, even with the help of several valuable assistants who worked with her during the course of her tenure. But she never waivered in her commitment to the University or the people.

“I loved everything about the job,” Minton says. “The students, planning practices, camps, community service, the trips, the games, the tryouts … I enjoyed all the people my job brought into the lives of my students and me just by being there. The people at Notre Dame, in the athletic department and across campus, were all great.”

And in the fall of 2000, these relationships would hold an even more special meaning. It was at that point that Minton discovered a lump in her breast. While waiting for the biopsy results, Minton tried to maintain her regular schedule. But it was obvious that something was wrong.

“On the morning I needed to see the doctor to receive the results of my biopsy, I had just finished my workout when (head Notre Dame women’s basketball coach) Muffet (McGraw) asked me why I was so quiet,” Minton says. “I told her what was happening and she said, ‘Let’s go. I will take you to see your doctor.’ Muffet had become a workout buddy from early on in my time at Notre Dame. Nowhere but Notre Dame would you have this opportunity to become friends with the most recognized women’s basketball coach in the country, and here she was driving me to the doctor. I was scared and unsure about what to do next (after receiving the results) as my doctor did not explain much.”

Her Notre Dame friends came to the rescue. Minton had received an email from a fellow Notre Dame employee whose triplets had met some of Minton’s cheerleaders. As luck would have it, this woman worked for Dr. Rudy Navari, head of the cancer research department at Notre Dame.

“When she found out my diagnosis, she quickly set up an appointment with Dr. Navari. He spent more than an hour with me explaining my cancer, telling me all that I needed to know moving forward and, most importantly, he told me that I was not going to die. At that point, I became one of Dr. Navari’s patients, and we remain friends to this day even though he has left this area to join the World Health Organization.”

Chuck Lennon, the executive director of the Alumni Association at the time, also put Minton in touch with his wife, Joan, who had undergone cancer treatments about five years earlier. Joan set up appointments with her doctors in Chicago, and Minton eventually had surgery to remove a clean margin lump from her right breast, followed by nine months of chemotherapy and 30 days of radiation.

Unfortunately, Minton wasn’t the only one experiencing health problems. Her husband, John, had been diagnosed with emphysema after being a smoker his entire life, and he had to retire. Further tests revealed that he also needed a new lung. By now, Minton’s job at Notre Dame was full time and her insurance would have covered everything.

“John was very conservative and said we couldn’t afford it,” Minton says. “But then I told him it would all be paid for and that he had no more excuses … he could have a new lung. We went through testing in Chicago and Indianapolis but, at that point, John decided he did not want to go through what it required. I was very sad and could not change his mind. It was his decision.

“So here I am diagnosed with cancer and him with emphysema, and we had one daughter in Chicago and the other daughter in Florida working on her master’s degree to become a physician’s assistant.”

Losing all her hair and going to chemo treatments by herself were the toughest parts for Minton. But she wore wigs and continued to work, gaining plenty of energy and support from her students and friends on campus. In addition to the rest of her family, John was particularly supportive of Minton’s need to be at Notre Dame, knowing it would help her heal. One moment stands out above the others.

“One of my greatest memories at Notre Dame was at the 2001 Women’s Basketball Final Four in St. Louis when I was right there on the floor next to my cheerleaders when they won the championship game,” Minton says. “It still excites me to this day. I felt Muffet had won this game for me.

“Of course that’s not true, but it was certainly great to be a part of it. On top of that excitement, a month later the equipment manager asked my ring size so Muffet could present me with a championship ring. It even has my name on it. How special is that? Nowhere but at Notre Dame.”

In the meantime, John was at home all the time now and on constant oxygen, and Minton became his caregiver. They had breakfast and dinner together every day, and she fixed lunches for him to have while she was at work. She gave him showers, cut and shampooed his hair and dressed him. He recorded home Notre Dame football games, and they would watch together on Sundays.

“I don’t know how he did this for 10-plus years, but John never complained about very much,” Minton says. “He did have lots of friends on the computer and lots of games that he played. (Eventually) the doctor said he had no lung function, and we set up hospice. On Sept. 18, 2011, we said our goodbyes.”

Minton buried John in his hometown of St. Louis with a baseball bat and a cardinal on his side of the headstone. A shamrock adorns Minton’s side. Two months later Minton also said goodbye to her mother. Once again, Minton found solace with her work and her Notre Dame family, but she knew her time there was winding down. Before she would retire, though, the specialness of Notre Dame would touch Minton again in a way she hadn’t imagined.

“One day I had a conversation with a person who had a great knowledge of growing things,” says Minton of Dan Brazo, who was Notre Dame’s athletics facilities manager at the time. “There was a strange, six-foot-tall plant that grew at the edge of my driveway, and I asked Dan if he could identify it. Soon there was an invitation to dinner that lasted three and a half hours and we discovered we had so very much in common. He had lost his wife of 40 years and I had been married 39 years; we both have twin daughters and we loved doing many things together. It was as though we were meant to meet.”

Brazo retired in February 2016 and Minton followed two months later. They were married in the Log Chapel on the Notre Dame campus in June, at which time Minton also became a confirmed Catholic. Minton said deciding to retire was a tough decision, but that ultimately she was ready to do it. But it hasn’t slowed her down.

“Retirement is nonstop busy,” Minton says. “We have a large garden and grow many vegetables. We hosted family for the wedding. We enjoy movies and popcorn. We love walking our property and searching for mushrooms. I love picking berries and making fresh cobblers. I love spending time with Dan’s 94-year-old mom who lives alone in the house in which Dan grew up, which is about 100 yards from our house. We enjoy visiting our daughters and their families. But the most favorite time of my days at home is nap time on the couch.

“The University of Notre Dame is a huge part of my life. I will always have very special memories from thousands of events and hundreds of students, an honorary monogram (from the Monogram Club) and Dan.”

Not to mention all the support she received when tough times struck.