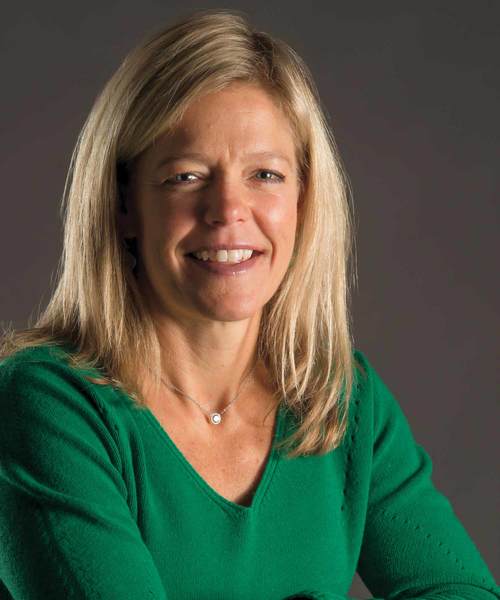 Staying connected with the Irish

“My parents and I came here for a visit during a football weekend, and we had such an amazing time,” remembers Robinson Keyes. “I just felt comfortable here.”

Plus, she had known Mary Gavin, a fellow native of the Garden State who was then a junior and star playmaker for the Irish, while the two were growing up. The pieces of the “where to go to college” puzzle fell into place relatively easily.

But in late spring, Robinson learned the Notre Dame coach who had recruited her, Mary DiStanislao, had decided to leave the coaching ranks and pursue her master’s degree at Northwestern University.

“I called Mary (Gavin) just to make sure there weren’t any problems with the team,” says Robinson Keyes. “But I never thought seriously about changing my decision. I wasn’t going to Notre Dame just because of a coach. I was going to Notre Dame because it was the best fit and the best school for me.”

What Robinson Keyes couldn’t know at the time was that she would eventually form a lasting connection and enduring friendship with that new coach—Muffet McGraw.

Ironically, McGraw had seen Robinson play in high school. Then the coach at Lehigh, McGraw was recruiting Robinson’s high school teammate, Sherrie Androlewicz. It wasn’t that McGraw didn’t like what she saw in Robinson—it was that Robinson was too good for Lehigh’s program and had already committed to the Irish.

But life took an unexpected twist, as it often does, and the paths of McGraw and Robinson converged. McGraw assumed the Irish coaching reins May 18, 1987, two months before Robinson arrived in South Bend, and began laying the foundation for one of the most consistently successful college basketball programs in the nation. Robinson, even as a freshman, provided the firepower and skill needed to help move the Notre Dame women’s program to the next level. McGraw’s faith and trust in her young player empowered Robinson, and the mutual respect between the two never wavered—the bond proved strong and true.

So nearly 30 years later, it made perfect sense for Robinson Keyes and her husband Kevin, who had played tennis for the Irish, to donate $5 million last spring and endow the Notre Dame women’s basketball head coaching position, making the first coaching endowment gift in the University’s history.

“We were in a position to give back, and Notre Dame has been so impactful for us,” explains Robinson Keyes. “We wanted to do a gift in a unique way to honor our backgrounds as student-athletes.

“We decided to do this for Muffet because it just makes sense. She is so deserving of it in everything she has done for the program. She represents Notre Dame in such a positive way. She is a dynamic leader and role model.”

McGraw, initially stunned by the bigheartedness of the gift, wasn’t surprised that it came from Karen and Kevin Keyes.

“It’s such a great honor, but the fact that it came from someone who went through the program and cares so much about it makes it more meaningful,” McGraw told Fighting Irish Media writer Curt Rallo. “We’re just so thankful, so thankful and so blessed for the generosity they’ve shown our program. Karen was such a great role model for Notre Dame women’s basketball and the University. The values we have—she has all of those.

“It’s humbling to think of the generosity of Karen and Kevin, and what she’s meant to our program. She was in my very first class at Notre Dame. I said, ‘I’m thankful you were here,’ because I might not still be here if I hadn’t hit the jackpot with her coming in. She was like sunshine every day, coming into practice with a smile on her face, upbeat and positive. I loved coaching her. She was so much fun to be around and she continues to come back.”

“I’m so happy that Muffet was the first to receive this special endowment,” says Robinson Keyes. “These kind of endowments are unheard of in women’s basketball so what better way to honor her and provide a greater platform for the sport.”

Endowing a department chair or professorship is a common practice in the world of higher education. But applying that philosophy to athletic coaching positions is a relatively new strategy. Most of the Ivy League institutions have done it in football for years, and Michigan, Stanford, Northwestern and others have followed suit. Universities invest the initial gift, or endowment, and the interest earned is then used to underwrite the position’s annual salary and help ease the financial burden many athletic departments face in these days of escalating costs.

“So many former Notre Dame student-athletes and others who are just interested in athletics and who have the means to give back want to be involved,” stresses Robinson Keyes, who, along with Kevin, serves on the University’s newly formed Student-Athlete Advisory Council. “Creating coaching endowments opens a whole new avenue to help the student-athletes and their sports. It allows Notre Dame to continue to provide student-athletes the best coaches, top-notch facilities

and other essential resources to compete for national championships year in and year out.”

When Robinson Keyes arrived in South Bend in the fall of 1987, the Notre Dame women’s basketball program was just beginning its second decade as a varsity sport. The Irish were not yet competing for national titles. In fact, they played in the North Star Conference (and won two league championships) and had made just one postseason appearance as a Division I program—a 1986 trip to the National Women’s Invitational Tournament. Then, McGraw entered the picture and raised expectations.

Notre Dame posted a 20-8 record Robinson Keyes’ freshman year, but the Irish lost by 20 or more to Virginia, Tennessee and Northern Illinois. Still, Robinson Keyes sensed the determination and passion in her coach and knew it would not take long for the former guard at St. Joseph’s University to create a powerhouse program at Notre Dame.

“Muffet knew she wanted to win a championship,” stresses Robinson Keyes. “She had that singular vision, that drive to stay the course. She’s so competitive in everything that she does. Yet, with all her success, she remains so grounded. She’s so gracious, and she helps people. That’s what Notre Dame is about.”

During her four years at Notre Dame, Robinson Keyes scored 1,590 points, a tally that still ranks ninth on the all-time Irish scorers’ list, and led the team in scoring her last three seasons. She was twice selected player of the year in the Midwestern Collegiate Conference (which Notre Dame joined in 1988) and was the first Irish women’s basketball player to be named to a Women’s Basketball Coaches Association (WBCA) all-district team. During her senior campaign, 1990-91, Robinson Keyes and the Irish finally cracked the top 25 rankings in the Associated Press poll.

With Robinson Keyes in her backcourt, McGraw finally got a championship trophy. In 1989-90, the Irish swept through the MCC Conference undefeated and finished the season with a 23-6 record that included a win over 20th-ranked Vanderbilt. A year later, when Robinson Keyes was a senior, Notre Dame won its second straight MCC crown and compiled a 23-9 mark, highlighted by a win over 11th-ranked Louisiana Tech.

Yet, Notre Dame’s invitation to the Big Dance, a trip the Irish had yet to take, never arrived.

“The MCC didn’t have an automatic bid then, but we had had a great season and figured we would get into the NCAA tournament,” recalls Robinson Keyes. “We all went to Muffet’s house to watch the pairings. There were only 32 teams in the tournament back then, but we still couldn’t believe we weren’t one of them. It’s actually one of the funniest memories I have of my time at Notre Dame. We all sat around and sulked and cursed the tournament committee. It was a great bonding experience.”

Ironically, Notre Dame made its first appearance in the NCAA Championship the following year, when the Irish, without Robinson Keyes, posted a 14-17 record (the only losing season in McGraw’s tenure at Notre Dame) but won the MCC Tournament, a feat that now provided an automatic bid.

After playing professionally in Switzerland, Robinson Keyes returned to Notre Dame to complete her master’s degree in business and serve as a graduate assistant for McGraw for two seasons.

Then she and husband Kevin, who grew up in Wisconsin, headed East and settled in her native New Jersey. Robinson Keyes, whose undergraduate degree from Notre Dame is in American studies, began doing on-air radio work for the WNBA’s New York Liberty. That eventually led to a job as a game-day reporter for the New York Jets’ online network.

But life, as it usually does, got a bit complicated and busy as the Keyes family expanded to include three children—including twin girls Katie and Cassie and son Johnny—and Kevin’s career on Wall Street thrived. After six years of working almost every weekend during the grueling NFL season, Robinson Keyes decided to focus on raising her family and returning to coaching—this time on the youth level. She now serves as the head girls’ basketball coach at Ridgewood (N.J.) High School where her daughters are freshmen and members of the team.

Robinson Keyes, who perhaps more than most understands how important it is for young women to have good models, admits to taking more than a page from her former mentor’s playbook.

“I take all of her offenses and try to use them with my high school girls,” says Robinson Keyes with a smile. “Muffet let me copy her playbook, but it was THIS big so I had to whittle it down. I try to use her philosophy of preparation and motivation as well.

“But at my level it’s not just about basketball—it’s about helping those young women grow and make the right choices about bigger things in life. That’s also what Muffet tried and still tries to do for her players.”

Although Robinson Keyes and Kevin, who is president of Annaly Capital Management, rarely had opportunities to return to campus in the first decade after they left South Bend, the last 10 years have allowed them ample opportunities to visit Notre Dame as a family as well as serve on several University advisory councils and committees. In addition to the Student-Athlete Advisory Council, Robinson Keyes is a member of an advisory council for undergraduate education and serves on the Gateway to Knowledge committee, a group of Notre Dame alumna who want to acknowledge the late Rev. Theodore M. Hesburgh, C.S.C., and his decision as University president to admit women to Notre Dame in the ’70s as part of the renovation of the library that bears his name.

“Kevin and I just celebrated our 20th anniversary—we were married in the Basilica,” says Robinson Keyes. “I think back 20 years ago, and we never had any idea we’d be where we are now.

Yet, the whole path through Notre Dame impacted everything we have done in our lives. We have been incredibly fortunate…and grateful.”

The couple, who met while playing pickup basketball, tries to catch the women’s basketball team in action whenever possible—either in person or on television.

“The change in women’s basketball is just so amazing,” marvels Robinson Keyes. “The interest level and exposure are great—no one lined up for us when we arrived at a road game—and we were rarely on TV. It’s just such a great opportunity now for women to be able to compete at such a high level. And Muffet played a huge role in putting Notre Dame on that national stage.”

Thanks to the generosity of the Keyes family, Irish women’s basketball shouldn’t fall out of that spotlight anytime soon.