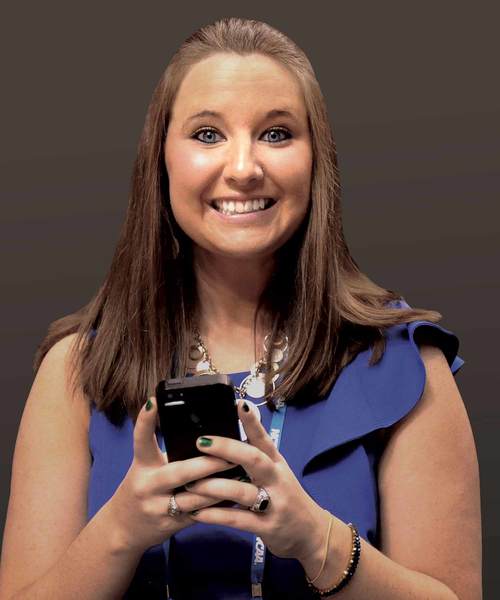 Hundreds of candles at the Grotto of Our Lady of Lourdes on the University of Notre Dame campus burn brightly, casting a warm golden glow that dances on the stones, illuminating faith and strength.

As Katie Schwab and her family face a trial of incredible hardship, their own faith and strength burn even brighter than the candles at the Grotto where Katie so often sought solace.

Schwab, who kept the Notre Dame women’s basketball program running smoothly as its director of operations during the 2013-2014 season, is currently in a medically induced coma to deal with complications of Type-1 diabetes.

“No one, including the doctors, truly understands what is happening,” says Katie’s sister, Sarah. “That’s where we, as a family, turn to the cross.

“We believe God has a plan for Katie, and God has called Katie to this moment. Something happened with her insulin pump that caused this issue. She is proof that we never know, and the unexpected happens, but through all things, God can make good.

“The best thing about our family is we have always been huge supporters of each other,” Sarah says. “We rally when anybody needs it. Right now, all of our energies are with Katie. We are open to what God has planned for us.”

Katie Schwab enjoyed a meteoric rise to the role of Notre Dame’s director of operations for Fighting Irish women’s basketball.

“As a manager, Katie was an integral part of our team,” Notre Dame head coach Muffet McGraw says. “She was organized and got things together and had a great relationship with the girls. She helped them out and was a good liaison between staff and players.

“Katie did such a good job that we wanted her to stay on as our director of operations. We felt she would handle those responsibilities equally well. That role is so important to our organization, the travel, community service … she really had a hand in everything we did. We relied on her in so many ways. She did a tremendous job with it all.”

Schwab tackled the duties of a student manager with amazing passion, no matter how mundane or challenging the task. Her enthusiasm and charisma, along with a talent for getting a multitude of jobs done and done correctly, caught the eyes of the Irish athletic department.

“When Katie was our senior manager, the thing that impressed me so much about her is that she was incredibly diligent and really consistent, which I appreciate,” says Jill Bodensteiner, Notre Dame’s senior associate athletics director in the areas of compliance, policy management and legal affairs.

“You got the same, very pleasant, very nice, very fun Katie every day. She took her job really, really seriously as a manager. She is very reliable, smart, and brought all the right skills to the job as a manager. She related well with the team.”

“We took the unusual decision to essentially promote her from senior manager to director of operations right away, which is a gigantic leap and one that we wouldn’t have considered if it weren’t for all of her traits and skills,” Bodensteiner says. “The director of operations position is extremely demanding.”

Schwab handled all the logistics for the Notre Dame’s women’s basketball team year-round. That means knowing the players’ schedules for academics and basketball, organizing community service, coordinating travel, working with the team nutritionist, as well as knowing all the details and expectations of the coaches and student-athletes. Then, she had to take all of those details, needs and schedules and make sure they blended together to make everything run seamlessly. It’s all about enabling players and coaches to perform at their best—ensuring that every bus shows up at every arena on time, every pregame meal is perfect, every hotel detail is perfect.

“It’s a pressure-filled job and we thought Katie could make the jump to it,” Bodensteiner says.

“Katie’s ability to make everybody around her feel special—even though she had to deal with a lot of stress—is remarkable,” Bodensteiner says. “She was the same, upbeat person every day that she came to the office.”

McGraw said the Irish depended on Schwab as a critical member of the program.

“It’s a very difficult role for anyone, let alone someone who just graduated,” McGraw says. “It’s a very demanding role. You’ve got to be on top of everything all of the time. You have to wear a whole bunch of hats. You have to be good at a lot of different things. It’s not an easy job. To come in without having any experience other than being the manager, I thought it might be difficult for Katie, but she made the transition very well.”

Katie Schwab’s upbringing prepared her for a demanding job—and the incredible medical challenge that now faces her.

She graduated as valedictorian at St. Joseph Central Catholic High School in Ironton, Ohio. In addition to being at the top of her class academically, she was president of the National Honor Society, president of the student body, played every sport available and was tireless in service activities through her high school and church.

“If Katie wanted to do it, Katie did it,” says her mother, Tammy. “Nothing held her back. Her brother Ryan is exactly two years older than her, and she always kept up with him.

Intelligent, compassionate, athletic, Katie called on all those traits to confront adversity. She was diagnosed with Type-1 diabetes her junior year of high school and was in a coma for a period of time. She emerged from that coma determined to get back on track.

Tammy thinks raising four children via 13 years of Catholic education instilled much of the strength and faith in her children.

“Faith is very important to my family, and my children live what they believe,” Tammy says. “Even in the condition Katie is in right now, you can see that she has Jesus in her heart, she has love in her heart.”

“She has always been the go-to for all of her friends,” Sarah says. “She’s always been the one who was always balanced for all three of us (siblings). She was always the one everybody called in the family to talk because she always brought that balance and peace that we needed.

“Because of her ability to be independent … she was so much more mature for her age than any of her classmates … she just gets it. She always got what it was about. That made her very special. I think any of her friends would say the same thing.

Sarah said if Katie was inundated with tasks, she never gave a hint she might be overwhelmed. She just tackled her job head on and got everything taken care of in an efficient manner.

“Katie has always been a people pleaser,” Sarah says of her sister. “She’s always been a very gentle soul, very kind and sweet. Those attributes have earned her a lot of opportunities to be called upon. Katie always saw what we were doing, and she wanted to do that and more. She used it as fire and fuel to get to where she got, and she can accomplish anything.”

Although Katie has been in the medically induced coma for two years, her strength has her and her family fighting on.

Her family sees every day how Katie touched lives.

“We tell her all the time about the stories we hear, how she touched lives, the messages we get on Facebook or CaringBridge. We read her letters and cards, all of these things that come in for her,” Sarah says. “She would have never imagined this. She was always behind the scenes. She was the baby of our family, so she had to wait for her turn to shine. The whole time, she was the one shining.”

Notre Dame is still a major part of Katie’s life.

Katie’s family spends as much time as they can with her—including working with the Juvenile Diabetes Research Foundation and involvement with fundraisers.

“It has become our family’s mission,” Sarah says. “We want to make sure Katie’s experience is something no other family has to experience.”

Saint Mary’s students (“Belles for Katie”) have held multiple fundraising events for the Schwab family, and another support group known informally as “Team Katie” has put on other events to defray medical costs.

As Katie’s strength keeps her fighting, those whose lives have been touched by her know that her faith supplies that strength.

“Katie didn’t talk with me about her faith, but you just saw this resolve and incredible sense of family—and this inner strength that I could tell came from her faith and her family,” Bodensteiner says. “You could just tell Katie was raised in a family where faith was extraordinarily important.”

“Katie’s faith was always evident,” McGraw says. “She was always interested in service and always wanted to do something for someone else. She is very, very spiritual.”

Tammy says the family is trusting in God’s plan.

“We trust in the Lord, the Trinity, the Blessed Mother,” Tammy says.

“I see continued progress in her.

“It’s not giant steps—she’s not up and walking.

“But I believe in my heart Katie will be touching lives in the future.”

The Schwab family invites interested persons to donate to Juvenile Diabetes Research Foundation (JDRF Mishawaka is the team name) or to “Belles for Katie” through Saint Mary’s College.