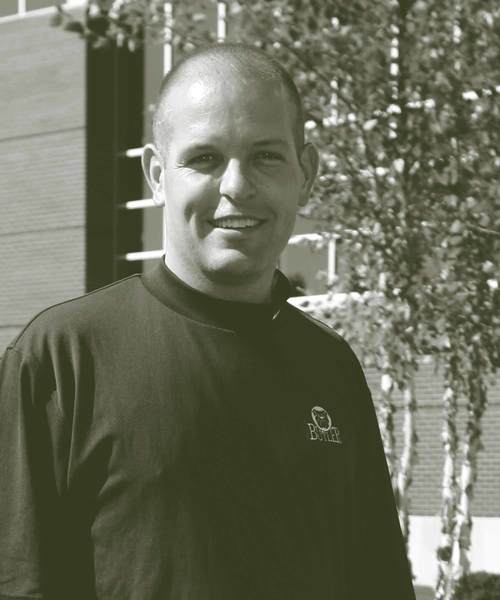 ‘Her flight never showed up’

One of Kevin Kuwik’s biggest thrills in his coaching career occurred last spring when the University of Dayton men’s basketball assistant was part of the Flyers’ Cinderella run to the NCAA Elite Eight, defeating two heavyweights—Ohio State from neighboring Columbus and Syracuse, New York’s college team—in the opening weekend at Buffalo.

The 39-year-old Kuwik, who grew up in nearby Lackawanna, New York, realizes no mission is impossible.

Kuwik epitomizes what a Notre Dame education is all about. He has always been a team-first guy who has put service to others above all else, as evidenced by his 18-month tour of duty for the Indiana National Guard in Iraq that temporarily interrupted his career in 2004. He was awarded a Bronze Star, the highest honor for meritorious service given by the Army.

Kuwik stood on higher ground again five years later when he became an inspirational catalyst for the families of the victims of Colgan Air Flight 3407, a Continental commuter plane, which crashed in a Clarence, New York, neighborhood, less than five miles from Buffalo Niagara International Airport on Feb. 12, 2009, a cold, icy evening. He has shepherded them through a lobbying campaign that finally convinced Congress to pass the Airline Safety and Federal Administration Extension Act of 2010, which allowed more rest for pilots and established a central board data base for airlines to review pilots’ FAA records before hiring.

The rule mandates that a co-pilot hold an Airline Transport Pilot certificate, requiring 1,500 hours total time as a pilot. Previously, co-pilots were required to have only a commercial pilot certificate, which requires 250 hours of flight time. The bill includes a requirement for a pilot to have a minimum of 1,000 flight hours as a co-pilot in air carrier operations prior to serving as a captain for a United States airline.

Kuwik had a personal stake in the passage of this legislation.

Lorin Maurer, his serious girlfriend at the time, was one of the 48 people onboard who perished in the crash, which the National Transportation Safety Board attributed to pilot error. Lorin was working in the Princeton athletic department at the time and was flying to New York to meet him for his brother’s wedding.

Kuwik, who was working as a video coordinator for Brad Stevens at Butler University at the time, was devastated by the senseless tragedy. For safekeeping, he boxed up Lorin’s bottle of perfume that sat on his dresser, the clothes she left behind and the picture of her that sat on his desk. He then started searching for answers that weren’t readily available.

“Obviously, you are trying to deal with the raw emotions and you are so overcome and you’re trying to make sense of when bad things happen to good people,” Kuwik says. “I’m a natural doer and in the spring there wasn’t any recruiting for me to do and I was like, ‘I’ve got to do something.’ I saw how this was just crushing Lorin’s dad and I just wanted to make a difference. I had no idea how Washington worked, but I was like, ‘Let’s try to figure out something.’ You talk about little ripples in a pond. When we started, it was a lot of tiny ripples. We really didn’t know what we were doing. And what made it worse was the more we found out the more we learned about the monstrous mistakes that were made. Planes rarely, rarely fall out of the sky.”

According to transcripts in the cockpit voice recorder, the flight captain, Marvin Renslow, told his co-pilot he’d gotten his job with only 625 hours of flight experience. The first officer, Rebecca Shaw, said she had never flown in icy conditions. Investigators told The Washington Post that Renslow pulled the plane’s nose up when alerted by an emergency stall warning when he should have pushed the nose down to gain speed. Shaw was sleep deprived after riding 2,817 miles on a cockpit jump seat the previous day. Both noticed the icing on the windshield but reportedly didn’t react as the plane descended below 10,000 feet.

Kuwik immersed himself with the “3407” families in a fight for stricter regulations and higher standards for aviation. Their initial attempts got little response. The 50 emails he sent to members of Congress went unanswered.

But Kuwik never, never gave up, vowing not to have let Lorin die in vain. Then he had a chance meeting with a sympathetic lobbyist at a casino during the 2009 NCAA Men’s Basketball Final Four in Detroit. Chris Caputo, an assistant at George Mason University who has since followed his head coach Jim Larranaga to the University of Miami, was having a drink with his fiance and now wife Julie Nissenbaum when Kuwik walked into the bar. He introduced the two and, after hearing Kuwik’s story, Julie volunteered to set up a meeting between Kuwik and congressional staffers on Capitol Hill. Suddenly, doors started opening.

“It was a long process,” Kuwik says. “The first year and a half, we were probably in D.C. every other week working on this thing.”

Meanwhile, Kuwik had switched jobs to Ohio State. He was exhausted but he kept pressing forward, juggling two jobs at the same time. Ohio State head coach Thad Matta would occasionally check in on him. There were times when Kuwik was asleep at the computer, then would be back up 20 minutes later, ready to go. “Thad was really great about it,” Kuwik says. “He understood. He said, ‘Just do what you have to do. I know you’re going to do me right, getting your job done. But when you need to go, go.’”

When Matta hired Kuwik in 2009, he had no idea of the depth of commitment Kuwik had to the families. But after he and his wife Barbara watched a show on “Frontline” about the crash and the aftermath, he had his players wear patches with “3407” on them for Ohio State’s next game.

The legislation finally passed on Aug. 1, 2010, and Kuwik has made numerous trips to D.C. since then to make sure the bill wasn’t watered down by the airlines because of proposed budget cuts.

Kuwik is a man who has always been driven by duty to others and his desire to make the world a better place.

He comes from a family of coaches and teachers. His parents, Edward and Karen, were teachers in Lackawanna before his father—a lifelong politician—became the mayor of the city. His brother Keith is a principal in Clarence. His uncle, Bill Moore, taught and coached at Lackawanna High, winning two New York state football championships. “Growing up, he was one of my role models,” Kuwik said. “He gave me a passion for sports. I was just an average player, but I always wanted to be a part of it and I loved the way he coached and taught. I wasn’t going to college to major in coaching. But that was in the back of my mind.”

As a condition of his scholarship, Kuwik committed to four years of active duty with the Army and four more years inactive. He did four months of junior officer basic training, got commissioned, spent two years at Fort Lewis in Seattle and accepted the Army’s incentive plan to complete his obligation as an officer in the national guard.

Kuwik then set out to break into coaching. He spent an entire summer driving across the country for 10 weeks to work the camp circuit, networked through former Notre Dame men’s basketball assistant and current Iowa head coach Fran McCaffery and received an offer to become an assistant to Tom Crowley at Christian Brothers University in Memphis, Tennessee, before eventually moving to St. Michael’s College of Vermont and then Ohio University.

Kuwik did his time with the guard. His eight-year obligation was up in the fall of 2004. Because Kuwik was an officer, he needed to provide specific documents telling the Army that he had completed his duty.

“In the back of my mind,” Kuwik said, “I knew that. But you know how it goes. I didn’t know exactly what I needed to do, and I was working a lot with recruiting in the July observation period.”

On July 4 of that year, he attended a reunion with some of his Notre Dame classmates and some of them had already received their discharges, and they told Kuwik exactly what forms needed to be signed, sealed and mailed.

That August, Kuwik finally got around to sending in his paperwork. Then, the Friday before Labor Day, he received a letter from the Army. He thought it was his honorary discharge. Instead, he received orders to mobilize in support of Operation Iraqi Freedom.

“That kind of turned my world around,” Kuwik says. “A month later, I was leaving to report for training and a month after that, I was flying to Iraq.”

Kuwik could have fought it, but he thought that would send the wrong message about commitment to the players he recruited. Ohio University coach Tim O’Shea told him his job would be waiting when he got back.

Kuwik spent a year and a half as a captain in the 113th Engineering Battalion, which had the responsibility of sweeping roads for improvised explosive devices (IEDs) during Iraqi elections. He got an up-close look at the horrors of war in a hot spot—Mosul—watching men and women die or lose limbs in explosions. But he also saw hope for a country fractured by sectarian violence.

Whenever he could, he would stay up late and listen to the Bobcats’ games on the Internet from his barracks and email notes of encouragement to the staff and the players. In the spring of 2005, he used a two-week leave he had earned to take a 30-hour flight to watch Ohio University play in the Mid-American Conference tournament.

“I really bonded with the guys from Indiana, they were all Indiana Hoosiers,” he says. “Everybody over there gets a two-week rotation to come home. My rotation was going to be way after the season. These guys knew how bad I wanted to be part of it. They were all following the team. It basically worked out that my boss got one of the other soldiers to trade with me so I could come home for the conference tournament. It’s not like you are going to get in a plane at 3:50 and it’s going to get in at 11. You fly when they have room. I literally landed in Buffalo at 5:30. My dad picked me up and I got to Athens Monday for our first-round game. I think Tim just about fell out of his chair when he saw me. We won that one, then went to Cleveland for the semi-finals and finals. We were the five seed and we beat Buffalo—my hometown team—to win the title. Then we opened against Florida in the first round of the NCAA tournament. We were down 20, came back and just about beat them.

“It was an amazing two weeks and my comrades were able to follow us and see us on CBS and ESPN and the Air Force network.”

Kuwik flew back to complete his final eight months of duty in the Gulf. That December, the day before the Bobcats were to play Cincinnati, he returned home for good to resume his coaching career. The journey helped him appreciate the friendships he had formed and helped him think about others after the plane crash.

He is moving forward now, climbing a Division I coaching ladder that has taken him from Notre Dame to Dayton. When the Flyers arrived in Buffalo last March to take their first steps in the NCAA Championships, his family, friends and his new girlfriend were there to greet him.