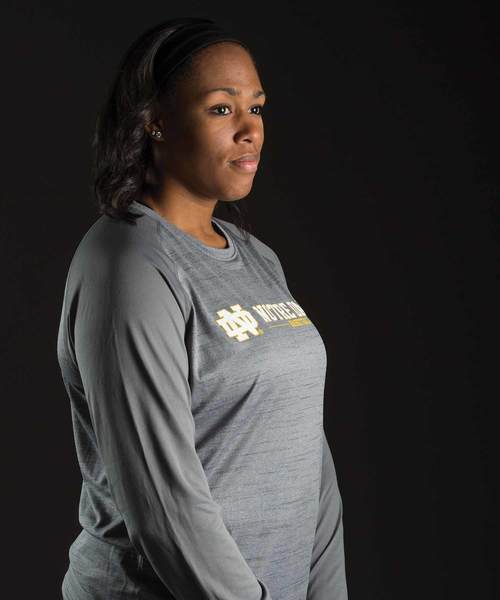 There is still a poster of former University of Notre Dame women’s basketball legend Skylar Diggins adorning the wall in Jeremy Nelson’s bedroom in the Nelson family home in Buford, Georgia.

There are other Notre Dame women’s basketball artifacts that Jeremy, a budding basketball phenom, decorated his bedroom with after his sister, Kristina, announced she would be attending Notre Dame and playing for the Fighting Irish.

Herb Nelson, a former Grambling football player, finds comfort working in Jeremy’s bedroom. Herb and his wife, Nanette, have left everything the same in Jeremy’s bedroom since the day Jeremy went to play in a youth basketball game on Jan. 5, 2013.

After watching the Notre Dame women’s basketball team pull off a stunning victory that day at Connecticut, Jeremy went to his youth basketball game. He collapsed during the game, went in and out of consciousness, and eventually passed away.

Jeremy, who was a 6-foot, 12-year-old seventh-grader, had already begun carving out a reputation as a basketball player with skill beyond his years. His size 14 feet gave coaches a profound indicator that he might grow into a towering presence on the court. Kristina, a center for the Fighting Irish, stands 6-foot-4. An outstanding student, Jeremy’s future academically and athletically was burning bright.

But the celebration of a shining light in the world turned to mourning. Jeremy’s passing was a tragedy of epic proportions for the Nelson family.

Faith and remarkable strength have helped the family persevere.

Kristina, now a senior at Notre Dame, has been a powerful source to help the Nelson family find the strength to move forward.

“Everybody in our family had to be strong at that point in time, but you didn’t expect it to come from a younger person,” Herb says. “Kristina realized that even though Jeremy wasn’t here, life would have to go on. Her high school basketball team was in the heart of the district playoffs, and she wanted to play. Jeremy would want her to play because he loved playing.”

Instead of dwelling on how the loss affected her, Kristina focused on her younger sister and Jeremy’s twin, Jessica.

“I think you find your strength when something happens,” Kristina says. “I still have my little sister, and I knew I had to be strong for her because I’m her role model. I’m supposed to be there when she needs me.

“Whenever I was down and out, I knew Jessica wouldn’t be OK, so I knew I had to toughen up and show her that I was OK, so she could be OK, too. By me being strong, I think it helped my parents with the process, too.”

Kristina was also her brother’s role model. They waged fierce battles on the court.

“Jeremy was super energetic, always,” Kristina says. “He was always running around the house with a basketball. He loved basketball.”

Herb, an imposing figure who brings a booming voice filled with passion and a joyful smile to Fighting Irish women’s basketball games, marveled at Jeremy’s love of the game.

“Since Jeremy was born, that’s all he ever did—bounce the basketball,” Herb says. “He loved it.

“Kristina was his hero. He went to all of her games. When he found out she was going to Notre Dame, he was so excited.”

Jeremy was the typical younger brother.

“Kristina used to get so agitated,” Herb says with a laugh. “Whenever she would make her Christmas list, Jeremy would ask for the exact same things.”

Kristina doesn’t remember many practices or games without Jeremy’s presence when she was growing up.

“He was always at my AAU practices and games,” Kristina says of Jeremy. “He loved being in the gym. He just loved basketball.

“In the backyard of my first house, we had a basketball court. We played basketball there all the time. He hated to lose. If he lost, he would storm off, or we would have to play another game.”

Jeremy passed away during the second semester of Kristina’s senior year. She was having a tough time, coming off shoulder surgery, struggling to be productive.

Kristina would find out that even though she wasn’t yet officially a member of the Notre Dame academic and athletic communities, the Fighting Irish considered her family and would be there to help her develop her strength.

Irish coach Muffet McGraw and her team were flying back from the victory against Connecticut when they heard about Jeremy’s death.

“The mood went from joy and celebration after beating Connecticut into incredible, incredible sorrow when we heard about Jeremy,” McGraw says. “We were in shock that this happened. It’s such a heartbreaking situation, but Kristina has been so strong.

“Your freshman year is so tough anyway, but dealing with the loss of her brother made it that much harder. We were very cognizant of the situation and we tried to be patient and let her go at her own pace. She handled everything really, really well.”

Kristina says the Irish were a great comfort.

“Right before his funeral, Coach McGraw and all of the coaches and a few of the players came to my house to check on us and see how we were doing. We got lots of calls from them. It was really special.

“My parents were very comfortable with my decision to go to Notre Dame, but I think, once Coach McGraw and everyone showed up to my house after my brother passed, my parents knew Notre Dame was the right place for me to be,” Kristina says. “Right in the middle of conference play, they were checking on me and my family to make sure we were okay.”

Fighting through the emotions of grief, Herb was touched by Notre Dame’s response.

“Notre Dame has been powerful in the lives of my family,” Herb says. “Muffet McGraw is my hero.

“When Kristina’s brother died, Muffet had seven or eight girls and coaches come down. They spent time with the family. Even though Kristina wasn’t at Notre Dame yet, they were here for us. When Kristina’s grandmother died, Coach McGraw brought all of the girls from South Bend to Chicago. That means so much. That’s a powerful moment that lets you know your child made a fantastic choice for her school.

“I wanted Kristina to go to Georgia because it’s 55 minutes away from our home. But I’m so glad she chose Notre Dame. Kristina has flourished at Notre Dame.”

“I credit Antonio Davis, her AAU coach, with teaching Kristina about basketball and how basketball can take you where you need it to take you if you work hard,” Herb says. “He taught her about developing inner strength and toughness. He always put it in terms so she could understand it. He really believed in her, and she benefited from that.”

Kristina needed her strength for her family when she finished her senior year of high school—and from the distance of the Notre Dame campus when she left for her freshman year.

“My freshman year was super tough, especially the summer when I first got here,” Kristina says. “Your freshman year is always tough, but I felt like I was missing something. That first year, the one-year anniversary of my brother’s death, my grandmother passed on that very day. We had a game, and I found out after the game. That year was pretty rough. I try not to remember the bad times. I try to remember the good times I had with my brother and my grandmother.”

Kristina will be wearing No. 21 for the Fighting Irish this season to honor her brother.

“My perspective has changed,” Kristina says. “My brother’s death made me realize that anything can happen at any time and not to take the little things for granted. For the years that he was with us … you don’t really realize someone’s impact until they are gone. He really impacted my life. I play for him now.”

Kristina and her family support local heart scanning in their community via the Simon’s Fund foundation that addresses cardiac arrest. Last summer she participated in a Heartsaver video, set to the tune of the Ghostbusters theme. Heartsaver is an American Heart Association initiative that teaches CPR (cardiopulmonary resuscitation) and AED (automated external defibrillators) use.

This season, her last at Notre Dame, will be especially meaningful for Kristina.

“There is a togetherness about this team at Notre Dame that I have learned to appreciate. It helps being with my teammates, especially on days that were tough for me. I don’t have my family, but these girls and the coaches, they’re my family now, too. I know they love me and care for me, and that helps me a lot. They’ve helped give me strength.”

Herb is proud of the strength Kristina has developed.

“I would hope that our faith helped Kristina develop her strength,” Herb says. “All of my children went to Christian school. You never know if a person has strength until they are tested. Kristina is strong. She has shown that she is strong. I give God the credit.

“Jeremy is watching over Kristina right now. I always tell him that, and I know he is. I tell him to help her be strong.