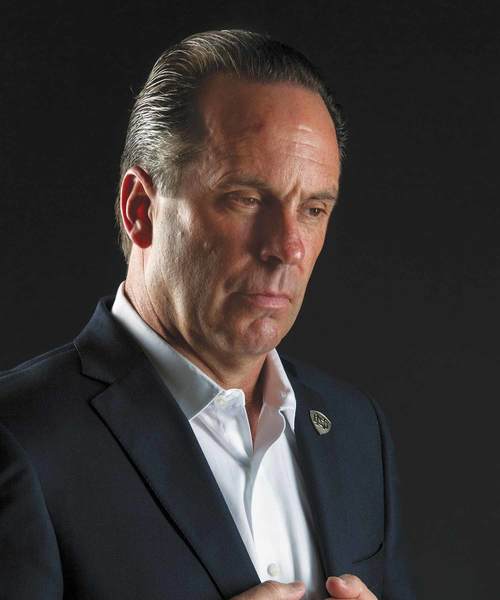 Committed to Coaching vs. Cancer

Thirteen seasons so far with the Irish netted him more wins than any other BIG EAST Conference coaches other than heavyweights Jim Calhoun (Connecticut), Jim Boeheim (Syracuse) and John Thompson (Georgetown).

Then, throw in five seasons as head coach at the University of Delaware, following a very visible eight years as Mike Krzyzewski’s assistant at Duke University.

Yet, for all the heady victories, exposure and limelight, coaches like Brey deal with the same issues as the rest of us. Like the day during his tenure at Delaware when he learned his father Paul had been diagnosed with malignant melanoma.

“I’d been involved with Coaches vs. Cancer before, but my dad’s experience got me going,” Brey said. “That’s when it hit me right between the eyes what a problem this was, what a challenge.”

He has met that challenge by becoming one of the cause’s most prolific fundraisers. And his father, now 83, is still around to share in his son’s success.

“We were fortunate,” Brey said. “We got him into Duke Medical Center, and he did well in his treatments. He’s in remission and living a nice life in retirement down in Orlando. But not everyone is that fortunate.”

So the work continues.

Brey’s commitment to the Coaches vs. Cancer program is another example of Brey’s selflessness, according to Morgan Wootten, the longtime DeMatha (Md.) High School coach: “He’s always been the type of person who walks into a situation and says, ‘What can I do to help?’ When his father got sick…‘What can I do to help?’”

A couple of years later Brey was relaxing at his beach house in Delaware in July 2000 when he heard a newsflash that would change his life.

Roy Williams had decided to remain the men’s basketball coach at the University of Kansas, declining North Carolina’s invitation to return home and replace Bill Guthridge, who had just retired after three years as the handpicked successor to iconic coach Dean Smith.

Brey knew Carolina wanted to keep the job in “the family.” Thus, the next man up was likely to be Notre Dame coach Matt Doherty, a former assistant to Williams who’d been a starting forward for the Tar Heels’ 1982 national champions. Doherty wasn’t exactly eager to leave South Bend after one season and one run to the NIT finals, but loyalty to his coach and his school was a powerful enticement.

“If Doherty takes the Carolina job,” Brey remembers telling his wife Tish, “we may be heading for South Bend.”

He did and they did, in what turned out to be a truly fortuitous move for the Irish.

Thirteen years later, Doherty is long gone from Chapel Hill, but Brey is a fixture at Notre Dame. The Irish ended an 11-year NCAA Championships drought in his first season and have made eight subsequent trips, along with four to the NIT. He began the 2013–14 season with a 285-142 record, trailing only Digger Phelps (393) and George Keogan (327) in career victories, with a .667 winning percentage. He has been named BIG EAST Conference Coach of the Year three times and national coach of the year once, in 2010–11.

And to think the Brey hire had been greeted with a degree of skepticism, not because Brey was unqualified—he was 99-52 with two America East Conference championships at Delaware, and Duke made six Final Four trips in his eight seasons as Krzyzewski’s assistant—but because certain Irish fans felt burned by the Doherty experience.

“At my first press conference somebody asked me if I viewed Notre Dame as a stepping stone to a better job someplace else,” Brey recalled, still incredulous at the memory. “I said, ‘Are you kidding? This is Notre Dame. I hope to retire here if they’ll have me that long.’”

One measure of the stability Brey has brought to South Bend: The Irish have been through five football coaches since he was hired. Football remains the signature sport at Notre Dame, but Brey has made basketball matter, and has done so honorably, without a hint of scandal.

As his Irish move to the Atlantic Coast Conference (“It’s almost like changing jobs after 13 years,” Brey says) his history on Tobacco Road is intertwined with Krzyzewski’s. But his true mentor, the man who started him on the path his life has followed, is Wootten, whose 1,274 wins and .869 winning percentage over 45 seasons at DeMatha brought him enshrinement in the Naismith Memorial Basketball Hall of Fame. Brey played for Wootten from 1975–77, then joined his staff after four seasons as a point guard at Northwestern (La.) State and George Washington universities.

“I coached the JV team and helped with the varsity, taught six classes of U.S. history and monitored study hall,” Brey said. “And, with DeMatha being Catholic, I ran bingo on the weekends. That’s where I learned how to work.”

Wootten, Brey said, “would never tell us where to go to college or who to marry,” but he sought his coach’s counsel before pursuing the Notre Dame job a second time. He’d made it to the final cut when Doherty was hired following John MacLeod’s departure in 1999, and he’d come to believe his view of basketball within a framework of something larger was compatible with the University’s.

And Brey remains a special favorite of his former coach.

“Any school would be fortunate to employ a man like Mike Brey,” Wootten said. “Unfortunately, there’s only one of him. But I’ve always believed that if you surround yourself with good people, good things will happen. That’s what Mike has been able to do.”

Selflessness, Wootten said, is the character trait that has always distinguished Brey, as an athlete, as a coach and as a man. It comes from his background.

“Both his parents are educators,” Wootten explained. “Teachers are givers, not takers. They want their students to do well, to be successful. That has always been Mike’s attitude. He was beloved as a teammate because he really wanted everyone around him to do well and be successful, and he worked to make it happen.

“As a coach, Mike has a tremendous understanding of the game, but he believes in shaping his system to the talents of his players and not the other way around. To me, that’s the mark of a good coach.”

Thirteen years into his Notre Dame tenure, Brey is totally certain that it’s the place for him. His down-to-earth, self-effacing nature is no act. He truly appreciates hearing himself described as the most “normal” person in major college athletics.

“Notre Dame lets me be who I am. They expect me to be the teacher I was trained to be,” he said. “They want us to compete hard and win honorably and be successful, but they want us to have balance in our lives. I try to interact with our guys the way I did

with the kids in the halls at DeMatha.”

Martin Ingelsby, now an Irish assistant coach, is the embodiment of Brey’s influence. A highly recruited point guard from Philadelphia, Ingelsby saw his playing time diminish under MacLeod and all but disappear under Doherty. But Brey remembered him as a heady floor leader at Archbishop Carroll High School and saw the value in having a tough-minded senior manning the point in the warlike BIG EAST.

“He came to see me at my parents’ house and made it clear I’d have an opportunity, that he was counting on me,” Ingelsby recalled. “I was really impressed with how energetic and enthusiastic he was. Very positive.”

Ingelsby and his fellow veterans felt battered by the prospect of adjusting to a third coach in three years. But Brey’s forward-thinking enthusiasm quickly won them over, and they would put together a 25-10 season, Notre Dame’s best since 1988. Ingelsby, by then a true believer, joined Brey’s staff in 2003 as director of basketball operations and has been at his side ever since.

“One of the reasons he’s successful is he really strives to make playing for him a positive experience,” Ingelsby said.

Brey, now a youthful 54, wouldn’t have it any other way. “When Rob Kurz or Matt Carroll or Colin Falls come back for a tailgate at a football game and they start telling stories about what a great time they had here…the wins and losses are important, don’t get me wrong, but to me, that’s what it’s all about,” Brey said.

Meanwhile, his stated Opening Day goal of retiring from Notre Dame moved into the realm of possibility last year when he signed a 10-year contract extension, binding him to the Irish through the 2021–22 season.

“Having ‘ND’ after my name still blows me away,” Brey said. “It’s pretty special.”

Just as special is his impact off the court. Long a leader in the Coaches vs. Cancer program that was started to raise awareness of and money to combat the nation’s deadliest disease, Brey is responsible for more than $2 million in CVC contributions through several events he and Tish sponsor, from a golf outing to a radio-thon to a Night of the Stars gala.

Brey was the recipient of the 2003 CVC Champion Award, given annually by the CVC National Council and the National Association of Basketball Coaches. He has been a national board member of the council since February 2003.

He and Tish were recipients of the 2007 Franklin D. Roosevelt Award presented by the March of Dimes for their volunteer service to the South Bend area.

In September of 2009, Brey was among five head coaches to travel to Washington, D.C., to participate in the American Cancer Society’s Cancer Action Network Leadership Summit & Lobby Day on behalf of the health care reform with regards to cancer research.

“I’m pretty visible in the community, and it’s fairly common for people to approach me and say, ‘Hey, Coach, how’s the team looking?’” Brey said.

“I’ve also had people say, ‘Hey, Coach, my dad had cancer and I want you to know I really appreciate what you’re doing to fight it.’

“That makes me feel pretty good.”