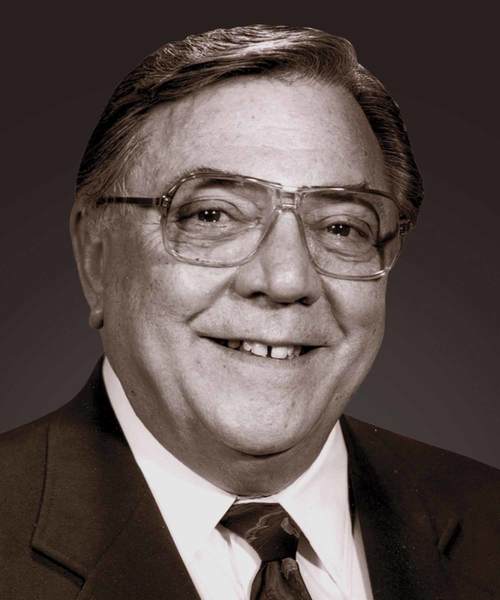 Fencing is the ultimate non-contact sport. The successful fencer is the man or woman who rarely permits contact to be made.

And so, how ironic that Mike DeCicco, who shepherded literally generations of athletes through the University of Notre Dame’s fencing program, was a serial hugger?

“Enveloping,” says Molly Sullivan, a two-time NCAA individual champion in the foil (1986 and ’88) as well as a two-time U.S. Olympian. “Like someone taking a big blanket and wrapping you in it.”

“You knew he was going to throw his arms around you after you won,” says Joe McQuade, who captained the squad in 1964. “We always had the feeling of a family.”

McQuade would know as he, his twin brother, Mike, two children and one nephew all competed for DeCicco.

Each human embrace was, for DeCicco, an extension of his unequivocal passion for Notre Dame. Because how does one five-foot-seven Italian-American wrap his arms around this entire University? It’s impossible. Although you can count on one hand the number of men who have come closer to succeeding than DeCicco, who passed away on Good Friday 2013, at the age of 85.

“I called him Notre Dame’s man for all seasons,” says legendary former football coach Ara Parseghian, whose teams won 83.6 percent of their games and two national championships in the 11 years that he led them—numbers that all pale in comparison to DeCicco’s. “Few people have made more of an impact on this University.”

What was Mike DeCicco to Notre Dame? What wasn’t he?

—A masterful fencer as an under-graduate who compiled a 63-20 record in three seasons (1947–49). DeCicco was the last Irish swordsman to compete in all three weapons: epee, foil and sabre. His 29-1 record in foil in his junior year stood as the best single-season mark for nearly three decades, until one of his own fencers surpassed it.

—Bluntly, the most successful coach in any sport in school history. Five national championships in 34 seasons. A career record of 680-45, for a winning percentage of .938—the iconic Knute Rockne, whose .881 win percentage remains the best ever for a Division I football coach with at least 10 seasons of experience, stares upward at DeCicco. A 122-match win streak that extended over four seasons. Absorb those numbers, and then consider that 90 percent of DeCicco’s athletes arrived in South Bend with no prior experience and that he never cut anyone.

—A professor of mechanical engineering who taught courses in that discipline and in thermodynamics at Notre Dame for 30 years, from 1954 to 1983.

—Lastly, and some might consider this the Newark, N.J., native’s most significant contribution to his alma mater, DeCicco was the school’s first academic advisor for student-athletes. Prior to his accepting the position in 1964, it was an office that did not exist, figuratively or literally, as DeCicco’s first office was the men’s executive bathroom on the first floor of the Main Building. No other national university had such a position at the time.

“They had five players flunk out of school the year before I arrived,” said Parseghian, who was hired following the miserable 1963 season. “Father (Edmund) Joyce and Father (Theodore) Hesburgh were committed to putting together a team that could succeed both on the field and in the classroom.”

In obliging the request, DeCicco, who was also a husband and father of five children, had little idea what he had gotten himself into. Before long he was overseeing not only the football team, but also every varsity sport. Instead of having 40 to 50 fencers under his watch, he soon had nearly 500 student-athletes.

Thermodynamics, DeCicco’s academic specialty, is the study of heat and related forms of energy. While one might consider a hug an endothermic reaction, in that it absorbs heat, the stout professor of swords and science was equally prone to exothermic reactions, explosions, particularly when student-athletes were lagging academically.

“One time early on Mike barged into my office and he was livid,” Parseghian recalls, chuckling. “‘Five of your football players skipped a class! If you don’t go to class, how do you expect to graduate!?!’

There exist, claims Dan Harshman, a member of the 1966 national championship football team who helped compile a biography on DeCicco, A Notre Dame Man, a plethora of stories about DeCicco “scaring people into being good students.” One such tale involves pulling a football player by the facemask off Cartier Field during practice and marching him over to a professor who was expecting a paper. Another time DeCicco confronted two-time All-America defensive end Ross Browner, one of the most imposing men ever to don a gold helmet, inside his office. Brandishing a sword, DeCicco warned the Outland Trophy winner that his reproductive organs would be in grave peril if he let his grades slip.

“Oh, he got your attention,” says former Irish defensive tackle Mike Golic, the last of three brothers to play football for the Irish. “I remember my freshman year, Mike was giving his speech to all the freshman athletes about the importance of us getting our diplomas. We knew he meant it when he slammed the sword down on his desk.”

The results are unimpeachable.

In 1988, when the Irish claimed the consensus football national championship, Notre Dame also claimed the College Football Association’s Academic Achievement Award with a 100 percent graduation rate (all 24 players who enrolled in 1982).

“There are entire generations of Notre Dame student-athletes, not just fencers, who will tell you that Mike played the most instrumental role in their earning their degrees,” says Harshman. “When Adrian Dantley was inducted into Notre Dame’s basketball Ring of Honor, he told the audience that the only reasons he got through Notre Dame were his mom and Mike DeCicco.”

Austin Carr, the greatest basketball player in school history, cited DeCicco when he was inducted into the Ring of Honor. Joe Montana, the most decorated NFL player to have graduated from Notre Dame, thanked DeCicco in his Pro Football Hall of Fame induction speech.

“What made it all work,” says Parseghian, “is that Mike was both an academic and a coach. The professors trusted him and the athletes respected him. And sometimes feared him.”

The least impressive aspect of the Notre Dame fencing program from the time DeCicco arrived in 1947 until his retirement in 1995 were the facilities. A familiar DeCicco refrain was that he brought more equipment with him from Newark than the fencing team had when he got there. In his early years as head coach, when practice was held under the bleachers in the old Fieldhouse, fencers began practice by sweeping the floor due to the excess of dirt and refuse that had rained down.

Once the team relocated to a gym inside the Athletic and Convocation Center, some four dozen fencers—humans parrying with extremely sharp objects—squeezed into a space smaller than a basketball gym.

“A regulation fencing strip is 14 meters,” says Mike Sullivan, whose 53-1 record in foil as a freshman in 1975 broke his coach’s single-season school record. “We practiced on a strip that was 12.”

“It was a dungeon,” says Molly Sullivan, no relation to Mike—though the pair, both from Boston, never disabused anyone of that notion.

Cramped confines. A team largely made up of novices, a squad in which upperclassmen usually taught their freshman teammates how to fence. A coach whose attention was divided between teaching courses and being de facto guidance counselor to every athlete. In such conditions the greatest sports dynasty in Notre Dame history flourished.

“Coach made everyone on the squad feel the same,” say McQuade, who with his twin brother, Mike, picked up blades for the first time in their lives as freshmen in 1961. “As soon as we had scored enough points to clinch a dual meet match, Coach would pull his best fencers (each fencer may compete in a maximum of three bouts) because he wanted to give as many people on the team as he could a chance to earn a monogram.”

As a result, 306 men and 29 women (the female team was launched, at DeCicco’s behest, in 1977) earned monograms under the coach whom they referred to as “the Italian Peter Pan.”

Despite winning two NCAA individual titles, Molly Sullivan most vividly recalls going out for dinner as a team after meets. “Coach DeCicco would announce that we weren’t allowed to order dessert,” says Sullivan, “then

he’d slide me over a piece of cheesecake with a wink.”

Notre Dame’s maternal figure is both titular and self-evident. Its paternal figure, at least for generations of student-athletes, was DeCicco. In fact, Digger Phelps used to refer to him as “the Godfather.”

Joe and Mike McQuade were only a month into their freshman year, and only a week or two into having taken up fencing, when their father died of a heart attack. Two lads from Manhattan’s Lower East Side, they had no idea if they would continue their college education.

“Coach DeCicco was on the phone with our mother while we were still back at my dad’s funeral,” says Joe. “We wouldn’t have finished Notre Dame if it weren’t for Mike and his wife, Polly.”

“Not long after I left for school my freshman year, my parents divorced and it wasn’t pretty,” says Mike Sullivan. “He became a sort of father figure for me.”

Last spring, when Sullivan attended his former coach’s funeral (more than 70 former fencers attended), DeCicco’s son Nick told him, “He loved you, man, you know it.”

“What?” asked Nick DeCicco. “Did your dad die young?”

“No, I’m Irish and I’m from Boston,” replied Sullivan. “I’m still waiting for my mom to tell me.”

Molly Sullivan was the most talented high school fencer in the country in the winter of 1984 when DeCicco paid a recruiting visit to her suburban Boston home. There were just two problems: Sullivan was the youngest of five children from a blue-collar family that had never sent anyone to college and she was dyslexic.

“Coach DeCicco is the reason I came to Notre Dame,” says Sullivan, “He laid it out like a contract: I want you to become the cornerstone of our women’s program and in return I’ll make sure to get you a great education and give you the help you need.”

When Sullivan’s mother suggested that she’d accompany her daughter to check out the school, DeCicco cut her short. “No, you won’t,” he said. “She’ll come out and decide that for herself.”

Sullivan would become the first Notre Dame fencer to be on full scholarship. She also was provided a one-on-one tutor as a freshman for her English composition course. She would also be named the school’s Female Athlete of the Decade for the 1980s.

“I’m the person I am today because of Notre Dame and because of Mike DeCicco,” says Molly Sullivan.

And Notre Dame is the institution that it is today due to the 41 years of service of Mike DeCicco. 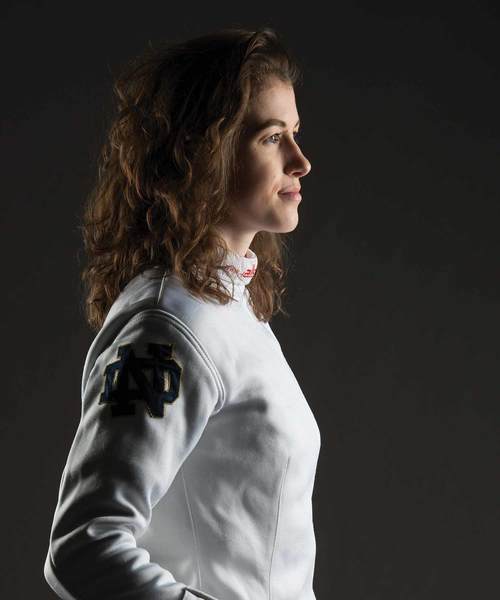 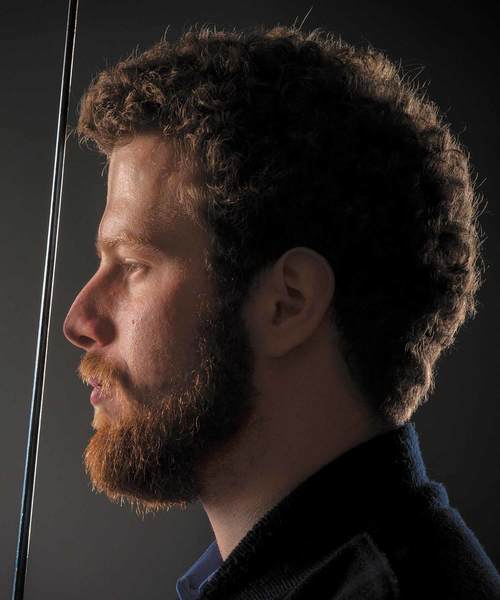