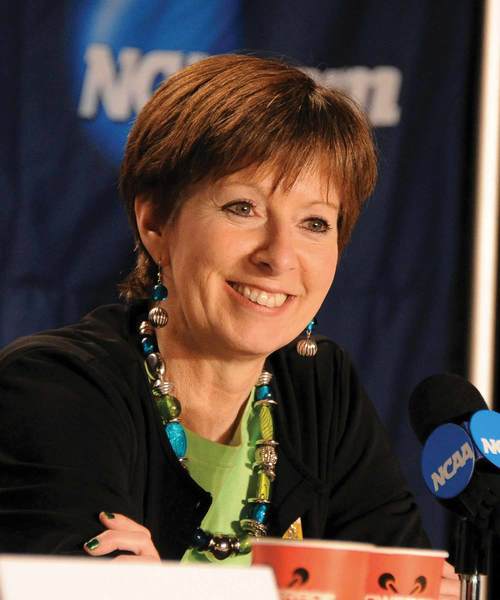 Muffet McGraw doesn’t quite get it.

You can ask the question several times, change the wording, do it in reverse, list the evidence and even ask her to just agree to go along with you and she still does not quite get it.

“It” is what she has accomplished away from the court in a town thirsting for someone and something to feel good about itself.

South Bend and the larger area known by the not-so-colorful name “Michiana” has taken its hits in recent decades.

The area’s economic difficulties all started on a dreary December day in 1963 when Studebaker cut its engines and basically left nothing here but a proud legacy of good, American-made cars and good, hardworking Americans holding the bag. Studebaker was on the west side of South Bend—and that same west side of the city, paired with Muffet McGraw decades later, turned out to be a winning combination that restored a lot of pride in a great city.

But no one could have predicted it, not even McGraw, because when she came to the University of Notre Dame as its head women’s basketball coach, she had no idea how long she could last, or even if it would turn out to be worth it to move from the east to the Midwest. It was a whole new world for her having, as she put it, seldom ever been west of Pittsburgh. She and husband, Matt, even came up with a Hoosier quiz for the trip to South Bend because you never know when the job interview might turn into a geography test. She did not want to stumble on something like, “What is the capital of Indiana?” or “What is the name of the county you are currently in?”

Those questions were not asked, but McGraw must have nailed the rest of the interview because she got the job, which turned out to be the easy part.

She was made no promises and there were no guarantees that just down the road would be a top-flight women’s basketball program for her to lead. There were still gender obstacles at Notre Dame; but rather than complain, McGraw decided to bide her time, trust her instincts and abilities and move forward—one step at a time.

It is important to keep in mind that when she came to campus Notre Dame was just 15 years into co-education, the male/female numbers were still skewed heavily to the boys—and there were some people who looked down their noses at the very idea of equality in athletics. Still, she marched on and kept quiet when she saw some things that made her say to herself, “We have a long way to go.” If players complained, she told them to just deal with it.

What they were “dealing with” comprised a challenging playing field. The women’s basketball team often bussed to games and even did its own laundry. And, as McGraw noted, it didn’t take many ushers to count the “crowds” at some of her games early on: “They could have done it by the end of the national anthem.”

But McGraw has certain qualities that would help a CEO be successful—a good mix of smarts, charm, grit and, let’s be honest about it, she is appealing. She still looks like the prettiest girl in your high school class that most of the guys were too shy to ask out.

All of that paid off as she spoke to Kiwanis Clubs and local Rotaries, winning new friends and fans and letting people know she was not just a coach at Notre Dame but also one of their neighbors. You cannot measure how important that is to people who were born and raised here and who are proud of their hometown. There was nothing fake about that and it had nothing to do with a sophisticated marketing program. It was just McGraw being herself. She liked where she lived, and she loved where she worked. Respect inside the athletic department and the campus beyond was growing, along with more winning seasons. It was nothing spectacular, but it was enough to get a few more fannies in the seats and a few more good basketball players to pay attention to Notre Dame.

Still, there were two obstacles that seemed insurmountable in the long run: the women’s programs at Tennessee and Connecticut, the twin equivalents of John Wooden’s men’s teams at UCLA.

Then something happened that was part luck and part magic, mixed in with a large portion of good coaching. Her name is Ruth Riley and she was from Macy, Ind. Macy could easily have been the setting for Hoosiers, one of those small Indiana towns that still thinks high school basketball is a social event that no one should miss.

This is hard to believe now, but Riley was not a big-time recruit, but rather, to be kind, a work in progress. What she did have is something that cannot be taught—a desire to be great. One practice and one game after another she just got better and better, and so did the Notre Dame women’s basketball program.

But there is something else McGraw’s recruit brought to South Bend—fans, lots and lots of fans. Macy is about an hour due south and less than a tank of gas for the round trip, and there were nights when it seemed the entire population of 300 made the trip along with a convoy of vans filled with folks from surrounding Miami County. And the people were not disappointed as their local hero and a roster filled with talent built with one win after another a basketball program that was now among the very best.

At the start of the 2000–01 season, the Irish rattled off 23 straight wins, but it was game number 17 that sealed the deal and, of course, it had to be against Connecticut. The Huskies came to South Bend with another powerhouse team and left humbled as the Irish won by 16 points.

But something else happened that day.

The Joyce Center sold out. There were even people outside trying to scalp tickets.

Case closed. Notre Dame’s women’s basketball had made the big time, an occurrence that did not go unnoticed on campus or in the local community. There may be no crying in baseball but, as McGraw told me, she asked several people that night, “Do I start crying now?”

The Irish went on to win the national championship and McGraw came up with a formula that proved to be the ideal solution to staying among the game’s very best and for filling those seats. Why recruit in California, she asked, when there are plenty of good basketball players right here in the Midwest?

As it turned out, one of the best high school programs in the country just happened to be in South Bend—Washington High School on the west side of the city and just a few blocks from those abandoned Studebaker buildings.

Jacqueline Batteast was Washington’s first superstar. She could have left town for supposedly greener pastures, but she did not. She came to Notre Dame. What that meant to the local community is not easy to quantify. The west side is a diverse neighborhood that has evolved over the years, but two things that have not changed are the pride it has in being a part of this community and its devoted support of Notre Dame. All you have to do is go into one of the west-side bars or restaurants and see the walls lined with Notre Dame memorabilia. Now one of its very own was a part of that legacy, and the west side and the rest of South Bend responded by going in droves to see the Notre Dame women play their game.

And it was Batteast’s success at Notre Dame, along with the now-defined recruiting finesse of McGraw and her staff, that brought another Washington High School superstar to campus named Skylar Diggins.

South Bend has embraced McGraw and her team and she continues to embrace the community—not just with words or her wins on the court, but by being a neighbor.

What she has become, in addition to a Women’s Basketball Hall of Fame coach, is one of us.

Yes, that is Muffet McGraw with husband Matt shopping at the local supermarket.

Yes, that is her not just being the face of local charities but the person who actually goes door to door delivering gift baskets during the holidays.

And, yes, that is her walking to the South Dining Hall with some of her players and staff.

When you exit the Indiana Toll Road at South Bend there is a sign at the highway pointing out the local attractions, many of them tributes to this town’s wonderful legacy.

Someday there should be one that says: “Welcome to South Bend, the home of Muffet McGraw. She made us proud again.”