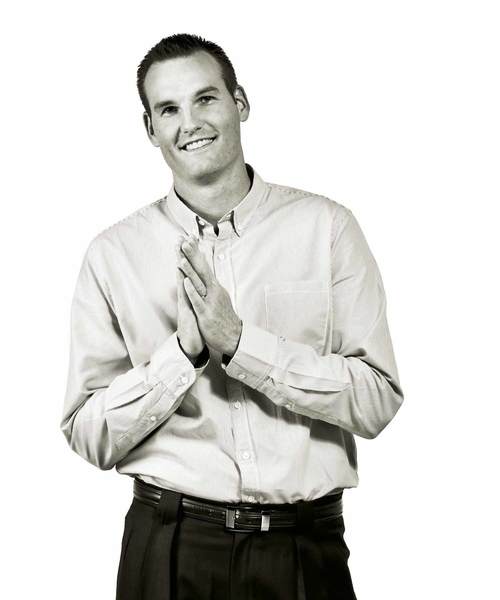 From the NBA to an MBA

After a stellar four-year career at Notre Dame and eight years in the NBA, Pat Garrity began to think about life after basketball. He had seen plenty of players in the league retire and either drift aimlessly or become involved in business ventures about which they had no experience or understanding.

So Garrity began to investigate the idea of going from the NBA to an MBA—enrolling after retirement in a master’s of business administration program.

“There were two things that led me in that direction,” he said. “I thought getting an MBA would be a structured way to explore other things that I like, and to gain some technical skills—accounting, finance—that I never picked up while majoring in science at Notre Dame. I also thought an MBA would show that I was serious about what I was going to do next.”

Born in Las Vegas in 1976, Garrity comes from an Air Force family. His father was a football player at the Air Force Academy and went on to a career in air traffic control in the military. The family settled in Monument, Colo., about 20 miles north of Colorado Springs on the Front Range of the Rocky Mountains, when Pat was in the fourth grade. His dad worked at the academy and Pat grew up playing football, basketball and baseball and cheering for the Falcons.

“I actually liked football the most, but I was tall and really skinny,” Garrity said. “I couldn’t keep any weight on. After my freshman year in high school, I grew from around 6-foot to 6-6, but I don’t think I gained any weight, so I was taller and still lanky.”

“I won some awards my sophomore year and played on an AAU team,” he said. “I started to have a goal of going to college and playing Division I basketball.”

As the leading scorer on one of the top teams in the state, Garrity received initial interest from the University of Colorado and Colorado State.

“I wasn’t real heavily recruited, at that point,” he remembers.

At an AAU tournament in Las Vegas in the spring of Garrity’s sophomore year, Notre Dame assistant coach Fran McCaffrey—now the head coach at Iowa—saw him play for the first time.

“He asked me to send him some tapes, so I spliced some videotape together and sent it to him,” Garrity said. “He kept in touch during my junior year and invited me to make an unofficial visit to Notre Dame for the Blue-Gold football game in the spring of 1993.”

With guard Brooks Boyer—now vice president and chief marketing officer of the Chicago White Sox—as his host, Garrity came away with positive feelings about the University.

“I really liked the school and the guys on the team,” he said, “but it seemed that the program was in a state of flux with a number of guys transferring.”

For that reason, Garrity kept his options open as a senior in high school and made visits to Missouri, Penn State and Stanford.

“I had an amazing visit to Stanford the week before I was supposed to visit Notre Dame,” Garrity said. “At that point, I had my heart set on going to Stanford and was ready to cancel my visit to Notre Dame. But my dad convinced me to go ahead and make the visit.

“What I ended up finding out on the visit was that the people at Notre Dame were more like me. That, and the fact that I would have a chance to play sooner at Notre Dame than at Stanford, changed my mind.”

Garrity signed with Irish coach John MacLeod and came to South Bend in the fall of 1994, still tall and lanky—about 6-9 and 210 pounds. As evidenced by Stanford and Notre Dame being his top choices, the academic component of college life was, as he put it, “actually more important to me than basketball.”

Garrity was a biology major his first three years, then shifted to pre-med, or what Notre Dame calls preprofessional studies, in the College of Science. His focus at the time was more on medical research rather than becoming a physician. But then his basketball career blossomed.

“Toward the end of my sophomore year I began thinking that I could make some money playing basketball, either overseas or in the NBA,” he said. “I figured that even in a worst-case scenario I could play for a few years in Europe.”

His junior year at Notre Dame changed that, putting him squarely on the radar of NBA coaches and general managers.

In the 1996-97 season, Garrity averaged 21.1 points and 7.4 rebounds per game for the Irish and was selected the BIG EAST Conference player of the year. He continued to impress during the summer between his junior and senior years, leading the United States team in scoring with 11.8 points per game in a fifth-place finish at the Under-22 World Championships in Australia.

In addition to Garrity’s selection as player of the year, MacLeod was named BIG EAST coach of the year in ’97. Their presence, plus a strong finish at the end of the season, made for plenty of optimism going into 1997-98. It didn’t work out that way, however. Though Garrity improved his scoring average to 23.2 points per game and earned second-team All-America honors, the Irish fell to 13-14 on the season.

“It seemed like we were ready to take a step forward,” he said, “but it just didn’t happen. We even took a step back. I still regret that we never made it to the NCAA Tournament. It was frustrating. It was nice getting individual recognition, but as a team we never did anything. We were a .500 basketball team. It just stunk losing.”

In the 1998 NBA draft, Garrity was the 19th player selected, going to the Milwaukee Bucks, who immediately traded him and Dirk Nowitzki to the Dallas Mavericks for power forward Robert Traylor. The Mavs then sent Garrity and two others players and a first-round draft pick to the Phoenix Suns for guard Steve Nash.

The 1998-99 NBA season was, in Pat’s words, “a terrible year to be a rookie.” Labor strife between the league and players led to a truncated 50-game season.

“My development was really stymied,” he said. “I did get to play a lot toward the end of the year, though, and was able to develop some then. Going into my second season, I thought I would fight for and get a lot of minutes. But then I was traded to Orlando.”

“Orlando was completely revamping its lineup,” Garrity recalls. “They made an absurd number of transactions in the off-season and cut a lot of salary. But we ended up 41-41 and just missed making the playoffs. That was actually one of my most rewarding years.”

Garrity went on to make substantial contributions to the Magic over the next several years, developing into an outstanding three-point shooter and averaging between eight and 11 points per game. He missed most of 2003-04 due to a knee injury, but continued to play well in a back-up role over the next four years. Off the court, he served from 2000 to 2008 on the executive committee of the NBA Players Association as secretary and treasurer.

“My contract was up and I wasn’t playing very much and didn’t like that,” he said. “I started thinking about what I wanted to do. I didn’t want to move my family (wife, Paula, and 5-year-old son Henry), and so I decided I had played 10 years and was ready to call it a career. It all worked out well for me.”

He then put the MBA plans he had been contemplating for a couple of years into action, enrolling in Duke University’s Fuqua School of Business.

“I was looking for a really good school that was fairly close to Orlando,” he said. “Plus, the students at Duke are similar to those at Notre Dame.”

He will finish his degree this spring with a concentration in investment finance and then move the family to Westport, Conn., to work with a hedge-fund firm that he worked for last summer.

Given his achievements on the court and in the classroom, it would seem likely that Garrity’s past performance is a good indicator of future success.