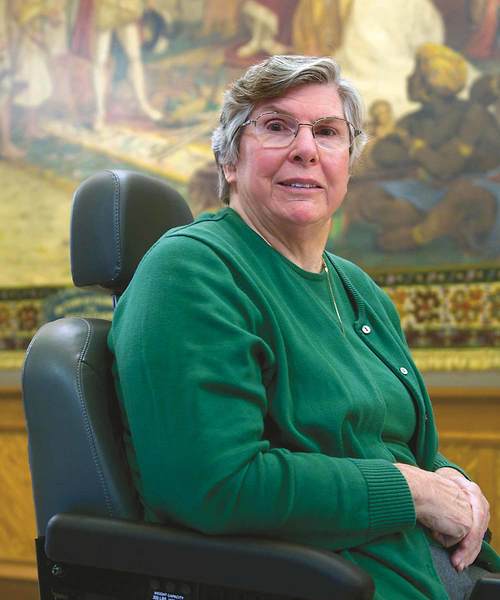 Patricia McAdams holds out her left arm as straight as she can—only a slight crook is noticeable. It is hard to imagine that this arm had been crushed in a horrible accident in early 2008.

“It has a metal plate and all kinds of wires and screws and pins—I saw them on the X-ray,” she says. “The doctors almost had to amputate it.”

She says it is a blessing that they could save her arm. “Without it, I couldn’t be independent … or drive … or live on my own. I was very fortunate.”

Not everyone could summon up that kind of optimism after the accident. McAdams was thrown over a guardrail after a driver lost control on a snow-slick road and crashed into McAdams’ parked car which she had just exited, cruelly slamming her own vehicle into her. She lost both legs. One was severed at the scene and the other was later amputated in an operating room.

Yet she chooses to focus on the saving of an arm rather than the loss of her legs.

McAdams, who began working in Notre Dame’s Office of Information Technology in 1992, was driving home from a Notre Dame women’s basketball game in West Virginia when the accident occurred. Many consider her to be the Irish women’s No. 1 fan, as she heads up the volunteers who sell programs, pack and distribute T-shirts to the season ticket holders, stuff envelopes, hang banners and so on.

She now has more than 50 volunteers to help her. “And I can remember when we were lucky to have more than 50 people at the game,” she says. “I could have the gold section all to myself.”

She didn’t mind driving hundreds of miles to follow her favorite team. That’s what she was doing on Jan. 13, 2008, returning home from a BIG EAST Conference game at West Virginia.

“I do remember we lost that game,” she says.

But McAdams doesn’t remember anything about her trip once she crossed the Indiana state line on U.S. 30 and headed toward I-69. A winter storm had kicked in and a wreck on the interstate near the little town of Ashley apparently made McAdams pull over.

Then, according to witness accounts, another vehicle lost control and rammed into McAdams’ car. Her car then was shoved into her along the road’s edge and she was knocked over the guardrail.

“It was a miracle I lived,” she says.

She counts her blessings: “The other car crushed my driver’s seat and I would have probably died if I were still inside.

“I was tall, 5-foot-10, and because of that, only my legs took the brunt of the collision.

“A young EMT was there (for the original accident) to hold the artery of my leg so I wouldn’t bleed out.

“A helicopter was already on the way for the other accident, and since my injuries were more severe, they took me straight to Parkview Hospital in Fort Wayne.”

There were other injuries, too. McAdams suffered six broken ribs, a broken pelvis, a broken left clavicle, a fractured back and neck, and crushed left arm.

She spent 15 weeks in the hospital. “The doctors and nurses called it ‘the invasion of the Catholics’ when I was there,” says McAdams. “Two of my sisters are nuns and then many of the priests from Notre Dame came over to see me.”

McAdams, 69, had been a nun herself for 31 years. She relied heavily on both her faith and family during her recovery. “I have nine siblings, 17 nieces and nephews and 16 grandnieces and nephews.”

One of her nieces, Kathleen McAdams, even took a leave of absence from her job in New York to be with Patricia for five months.

Then there was her Notre Dame family. After six months, she was able to return to her job, eventually limiting her duties to that of manager of the Provost Campus Workstation Program. People who worked with and around her made sure she had rides. Scott Kachmarik, who worked next door to her then as the director of housing, not only helped her learn to drive with special hand controls but he also shoveled the snow around her home.

McAdams enjoys strong connections to Notre Dame women’s coach Muffet McGraw. One of McAdams’ brothers is in the same parish as McGraw’s parents in West Chester, Pa. McAdams and one of McGraw’s sisters knew each other from their work in the Harrisburg diocese.

And McAdams taught for many years at Immaculata College where Theresa Shank Grentz, McGraw’s college coach at St. Joseph’s University, led the Mighty Macs to three national championships. “I taught math to half of the girls on those teams,” McAdams says.

She loves McGraw and her Irish, and they love her, too. “We are so fortunate to have Patricia as part of our program,” McGraw says. “And she is an important reason why we have been able to grow and sustain our tremendous group of the nation’s greatest fans.”

Stephanie Menio, the coordinator of basketball operations and marketing echoes the sentiment: “We would be absolutely lost without Patricia. When I came here six years ago, she was the first person I turned to to help me understand and connect with our fan base. She is the pulse of everything we do in marketing—from distributing 7,500 season ticket holder T-shirts to organizing bus trips to giving feedback on different promotions or in-game entertainment. We would not be able to do nearly as much as we currently do for the fans without her running the show.”

Yet McAdams, an honorary member of the Notre Dame Monogram Club, rarely sees the first-half action of the games. She is taking care of the money and programs from the gate sales by her volunteers. “I do it myself because I don’t want the other volunteers to miss any of the game,” she says. “Somebody has to be in charge.”

She certainly has taken charge of her life. She learned to drive with hand controls—even to the East Coast by herself just a year after her accident. She found a house that is handicapped-friendly and big enough for her to entertain friends and family on game weekends. She also has learned to swim as a way to stay in shape.

“At first, it took two people to keep me from drowning,” says McAdams who uses the therapeutic pool at Rockne Memorial. “Then I graduated to one person. And now, I can do it by myself—three days a week for about a half-hour in the pool.”

She continues to use a motorized wheelchair to get around. Because she is missing her legs well above her knees, artificial legs would not have been an ideal option. “I still would have had to use a walker and I couldn’t have sat with them on,” she says. “And with my wheelchair, I can zip around the [Main] building and campus with my five speeds. I’m doing just fine with the wheelchair.”

Her wheelchair … her van … her handicapped-friendly home keep her both energetic and self-sufficient.

“Because I didn’t suffer any internal injuries, I am in pretty good health and in hardly any pain,” she says. “I know some people may look at me and say, ‘Oh, poor Patricia. She doesn’t have any legs.’ Yet there are people who walk around and look healthy but are in pain all the time. I feel sorry for them, not me.”

She continues to look to the future instead of dwelling on the past. Yet on Jan. 13, 2010, the second anniversary of her accident, she was in Fort Wayne and not far from the scene of her accident. She had driven over for the installation of Bishop Kevin C. Rhoades, whom she has known since he was a seminarian in Harrisburg, Pa.

On the spur of the moment, McAdams decided to visit Parkview Hospital and look up Dr. Mary Aaland, the chief of trauma who spent several hours in the operating room saving McAdams’ life. She then drove to Ashley, Ind., and found Peggy Batchelder, the EMT who sat on a snow-covered hill at the accident scene and kept McAdams alive by putting pressure on her severed leg’s artery.

They were both pleased and relieved to see her doing so well. “They knew me and all about me, but this was the first time that I really got to meet them,” McAdams says. “I had no memory of them at all. It was pretty emotional talking to them.”

But McAdams didn’t cry. In fact, she doesn’t remember crying through any of her ordeal. “I went through a terrible accident,” she says. “But there is nothing I can do to change it and there is no use in feeling bitter. It just happened and crying isn’t going to be of any help.”

That kind of attitude isn’t lost on McGraw and her Irish. “Patricia is a great role model for our team,” the Notre Dame coach says. “She exemplifies so many of the qualities that we value in our student-athletes—courage, determination, dedication, loyalty, faith and generosity.”

“She doesn’t let anything hold her back, which is why she is the definition of the Fighting Irish,” adds Menio.

“Really, I am living a normal life, doing pretty much the same thing that I did before the accident,” McAdams says. “I am so grateful that they were able to save my left arm.”

So she can continue to be the right hand of the Irish women.