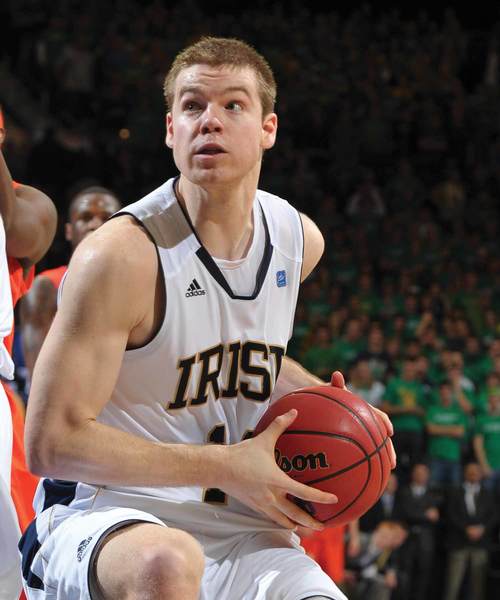 Through his father’s eyes

Irish men’s basketball forward Scott Martin’s story is best told not in what he says, but in the things left unsaid.

We’ve heard him talk about his unexpected transfer from Purdue to the University of Notre Dame after his freshman year with the Boilermakers. He’s discussed the ACL injury that temporarily halted his career and ruined his first year of play with the Irish. And news of his sixth year of eligibility—nearly unheard of from the NCAA—quoted him over and over again.

But for all the setbacks and attention during his college career, perhaps the most defining account of Martin has been hushed and buried under his own modesty.

Since arriving at Notre Dame in the fall of 2008, he has not only juggled the difficult schedule of being a student-athlete, but has also balanced being a son to a father with a rare form of cancer and a support system for a mother and brother, Andrew, back home. He has ferried himself from South Bend to his hometown, Valparaiso, Ind., several times each week, taking his father to treatments or being present at his brother’s high school basketball games. He has all but abandoned the “normal” college experience and instead chose to spend most weekends at home, especially in the early years. And he’s done so without thinking of his own concerns or realizing the demanding balancing act that he was undertaking.

“I didn’t think about it or prioritize things, I just did what I thought was best and what my family needed and what basketball needed too,” he says matter of factly.

The first signs of the cancer manifested when Scott Martin Sr. returned from watching his son in the 2008 NCAA Championships and began seeing doctors for an odd growth and swelling around his left eye which made it difficult to see. He began with an eye doctor, who said the issue wasn’t his eye at all. A family doctor, emergency room doctor and dermatologist followed, all uncertain of what the mysterious lump was.

In the midst of an answer to the problem, Scott began a search of his own—for a new school where he could play basketball.

“My dad was ill, so we thought it was important that I was closer to home,” he says.

Not knowing what the mysterious illness was, Scott signed with Notre Dame, assured that at the very least he was closer to home. Soon after, the family was sent to Northwestern Hospital in Chicago where it was quickly discovered that Scott Sr. had developed a rare form of non-Hodgkin’s lymphoma, cutaneous T-cell lymphoma (CTCL). Unlike most non-Hodgkin’s lymphomas, this form mutated some of the T-cells in his blood and had migrated to the area surrounding his eye.

“The thing about this cancer is [that] it’s a blood cancer, a lymphoma, CTCL, and it involves treatments by a dermatologist, an oncologist, a radiologist,” says Diane Martin, Scott’s mother and Scott Sr.’s wife. “And he also was put on a clinical study; so the doctor—I believe he’s an oncologist—headed up the treatment for this cancer because they don’t really have a way to cure it. They just try to keep it from getting worse. They just try to manage it.”

But managing it wasn’t quite so simple. Scott Sr. was to undergo chemotherapy, radiation therapy and interferon therapy, most of which were to occur in Chicago, more than an hour away from the family’s Indiana home. But with the NCAA regulations requiring that Scott sit out

a year before playing with the Irish, he was able to make it home to help out.

Knowing from the recruiting process what the family was going through, Irish coach Mike Brey, whose own father battled cancer, made it clear that Scott was to handle things at home as needed and he would provide the necessary flexibility. He told the talented forward: “Look Scott, with everything going on, if you have to be disengaged from us at times to do what you need to do with the family, we understand.”

After nine months, Scott Sr. was in partial remission and the younger Scott was ready to don his Irish jersey. But just before the regular season, a new injury sprung up. During practice on Oct. 1, 2009, Scott suffered an ACL tear that would take him out for yet another season. He had surgery to repair the ACL soon after and began the long road to recovery, though for him, one without much complaint.

“He was more concerned about his dad then he was about himself at that time,” Diane Martin says. “That’s treatment in itself, he was distracted.” The reverse was also true, she jokes. “They were both so worried about the other one that it took their minds off of themselves.”

In the wake of an injury and a second lost season, Scott could have rightfully moped, but instead came to see his injury as an odd stroke of luck.

“The good thing about it was that it gave me more free time to go home once I had the surgery and could move around and I could walk and drive. I didn’t go on a road trip here or there. I’d go home,” he says. “I was able to see a lot more of my brother’s games—at that point it was his senior year in high school. I didn’t have to be focused in on my basketball, I was just doing rehab which gets very repetitive and very boring—it’s the same thing every day for six months.”

He became even more appreciative for the time off when his dad was suddenly diagnosed with yet another, but unrelated, form of lymphoma, this time attacking his B-cells, threatening to require a bone marrow transplant. Scott Sr. was hospitalized quickly and moved to Northwestern Hospital soon after Scott’s injury.

It was one of those first nights Diane says that Scott displayed real strength.

As the ambulance prepared to leave for Northwestern, Scott picked up his brother and told him to get in the ambulance with his dad. Then he drove his mother to Chicago, uncertain of what was to come.

The next morning he drove back to Indiana, picked up his grandparents and once again returned to Chicago, handling nearly everything and everyone along the way.

Though Scott claims the second diagnosis was perhaps the most frightening time for the family, it turned out to be good news.

“We actually got lucky because the second cancer developed and it wasn’t an advancing stage of the first one,” he says with a smile, realizing that a second form of cancer isn’t usually a beacon of hope. “If it had been the first form, we would have had to do the bone marrow, but the second form wasn’t nearly as severe.”

Diane claims the second diagnosis had positive effects on Scott, too. “That’s when Scott realized that ‘maybe my ACL tear is something I can handle.’”

Then again, he cites his mother as being both optimistic and strong, even in a house full of men.

“My mom probably does the best of anybody. She’s the trooper. She’s the one who keeps us all in line and keeps us happy and everybody’s life running smoothly,” he says. “She’s the strongest one of the bunch I’d say … and she works full time, too!”

Noting Scott’s modesty, she says he contributed far more than he lets on. “He has no idea the support he gave his family. The only way I was able to appear as the strong one is because of him. He probably just does not realize that.”

When Scott Sr. quips from the background that his son isn’t perfect, the laughter suggests the family’s sense of humor endures as well. Her son, says Diane, has “a quiet strength about him. He’s very steady.”

For more than four years now, they seem to be each other’s strength and carry each other’s pain—a true family unit—speaking of the cancer as if it’s their own.

“We don’t have it quite beat yet, we have one in remission and one we’re still battling,” Scott says. “We’re through the hard part. It was obviously rough for everybody at a stretch. But that’s just how it goes with cancer.”

Today, as doctors adjust medications and try to keep Scott Sr. feeling well, one of the sources of his perseverance just might be basketball.

“I think it keeps him going and gives him energy,” Diane says, “It definitely takes your mind off things you don’t want to think about.” Which is why they’re so thankful Scott was granted another year of eligibility, allowing him to have his four years of eligibility, even if over a six-year span.

Scott Sr. says, “It’s given us time to enjoy that last year of basketball.”

“I think playing is a part of the whole family therapy. They really love watching him play,” Brey says. “They had to sit out for two years, it was a lot of crisis management. I think coming up here to watch a game is some of their happiest moments and that they get to do it for another year is just gravy.”