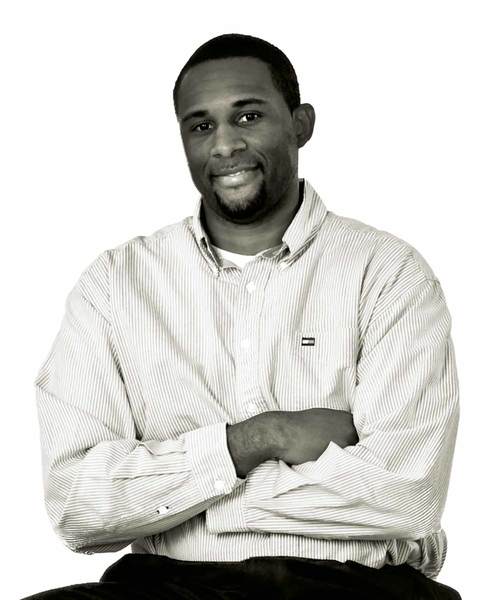 Here’s the part of the story you haven’t heard. It’s the best part.

It’s about Skylard Owens who came to Notre Dame in 1996 from Shreveport, La., as an aspiring 6-foot-2 power forward. He just might also have been the quietest freshman who enrolled that fall, arriving alone in South Bend and so shy that he had virtually nothing to say when a friend of a hometown friend met him at the airport and took him to lunch. He was a long way from home, both literally and figuratively.

An earnest, hard-working walk-on, Owens played three seasons under Irish men’s basketball coach John MacLeod, saw action in all 31 games as a junior and even started a few Big East Conference contests that year. A hustling 6-foot-4 forward, he was one of three captains his senior year when Matt Doherty became head coach and was on scholarship that year. “Getting the scholarship was the crowning achievement of my athletic career,” Owens says today.

Despite that individual accomplishment, Owens’ career as a Notre Dame basketball player is a minor footnote in the school’s hoop history. The narrative of his life, however, is a story that deserves attention. But getting him to recount that story runs you into his quiet nature and reticent ways.

Ask him about his life’s path and Owens will tell you about the people whose tough love and guidance pushed him out of the cauldron of poverty into a better life. Ask those whose goodwill lifted Owens and they will tell you that he has, in turn, become their inspiration and role model. “I count my blessings every day,” says Owens, who saw blessings where others confronted troubles that engulfed them.

Skylard Owens was born April 21, 1978, the son of Leo Taylor and Celeste Owens. Taylor was then a 21-year-old in the U.S. Navy. “My father had absolutely no part in my upbringing,” he says of the man he first met when he was 10. His father had been at the Louisiana State Penitentiary in Angola, one of the toughest places in America to do time.

As a fifth-grader, Owens had gotten his father’s address from his paternal grandmother. “I wrote my father a letter for the first time just to try to learn some basic facts about him since I knew absolutely nothing,” he says. “A few months later, I remember he came over to my grandmother’s house, and he shot basketball with me. That’s a moment I have never forgotten. I saw him once more about a week later, and then he was gone again. I assumed he violated parole and that was the reason he went back to prison.” It would not be until 2008 that Owens would try to find his father again.

“I honestly have the most difficult time talking about my mother,” Owens continues. His mother was 18 when she gave birth to Skylard and had already arranged for her mother to raise the boy.

“My mother had her own personal demons,” Owens explains today. “She had an on-again, off-again relationship with drugs. I wasn’t exposed to this on a daily basis since I never lived with her. But it explains why she was around sometimes and wasn’t around at other times. I did have contact with her when I was young, but it wasn’t always very enriching.”

Owens has tried in recent years to span the distance between them. “My mother has made tremendous strides in her life,” he says. “Until her recent stroke, she had been able to maintain employment for the past three years and keep the same permanent address.”

His mother had two younger children, says Owens, adding, “but their paths in life were completely divergent from my own.” The truth is, his life journey has been decidedly different from most growing up in the poor, volatile pockets of Shreveport—a prosperous city whose backsides suffer from poverty, drug play, violence and other embedded injustices.

The primary difference in Owens’ exodus from this world was Bernice James, his maternal grandmother whom, he says, “would become affectionately known to me as ‘Mama.’”

“My grandmother raised me with rules and discipline,” Owens explains. “After raising six children, Mama had a wealth of knowledge that she was determined to share with me. From day one, she took to instilling a strong work ethic and strong set of morals and values in me through discipline and positive reinforcement. Mama always said, ‘You will go to college and you will succeed in all you do.’ She specifically stated failure wasn’t an option and that the word ‘can’t’ should be removed from my vocabulary. Never at any point in my life did I ever think I wouldn’t attend college due to Mama ingraining the message in my head at a very early age.”

Books, not sports, would provide the road to brighter horizons. “I never saw basketball as a way to get an education. I always knew I was going to get an education somehow,” Owens says. “Playing basketball has always been my escape. Whenever I needed to find myself, I would always go out and shoot basketball.”

Owens had been introduced to the game by Mama’s youngest son, Russell Lott, who was 16 years older than Sky. Lott, says Owens, “served as a vital male presence in my life. In a sense, he was the big brother that I never had. He was instrumental in getting me to believe in myself and my abilities.” He was also as stubborn a taskmaster as Mama. The relationship could be contentious as Lott pushed his nephew to excel. When Owens’ initial eighth-grade report card boasted six As and a B, Lott told his nephew he could do better. Owens did, and also became the school’s student of the year.

Lott and his girlfriend moved in with Owens and his grandmother when Mama became seriously ill. When Owens was a junior in high school, Mama died. “At the time of her death,” he says, “I was a bit shell-shocked. In my 16 years of life, there had been one constant in my life and now she was gone. I wasn’t really sure what I should do, but that’s when all the knowledge Mama had shared with me intervened. I knew there were things for me to accomplish and that I needed to make sure I wore my work boots.”

Owens lived with his uncle and—aided by those who saw the rare qualities in him—attended Loyola College Preparatory in Shreveport, a Catholic private school where he played football and basketball, was voted senior class president and named student of the year as a graduating senior. Chip Naus, a Notre Dame alumnus, and the Kantrow family—Mike and Jill, Byron and Brock—were influential in Owens’ development. “They helped open my eyes to the world,” he explains. “The only things I knew life offered was what I was exposed to in my neighborhood. I had no idea how shortsighted I was.”

In 1995, Owens and a half dozen Loyola teammates had the chance to attend Notre Dame’s summer basketball camp, and Owens took the opportunity not only to test his court skills but also to visit the admissions office and University administrators. “Being accepted into Notre Dame was a dream come true,” he says today. “Never in my wildest dreams did I ever think it would happen.”

Since graduating in 2000, Owens has been a tax accountant at Deloitte & Touche, LLP, in California. He and Kristy Butts have two daughters, with a third due in January.

But the story doesn’t end here. There’s a bit of an epilogue. Owens explains: “The natural tendency for anyone in my position is to wonder why their parents aren’t involved in their life, but Mama wouldn’t have any part of me feeling sorry for myself. She repeatedly told me that everything happens for a reason and that I am only given one father and one mother and I should love them unconditionally. To this day, regardless of the frustrations I have had with my parents, I have tried to adhere to what Mama instilled in me.”

So in 2008, Owens sought his father in prison and eventually tracked him down. The two finally met in July 2010, in Shreveport, where his father was working at a fast-food place and living in his mother’s old house. The two spent an hour talking. His father said he had dreamed of the moment for years.

“I contacted my father,” Owens explains, “because I thought it would be good for him to know I harbored no ill will toward him. I wanted to let him know about some of the wonderful things that had occurred in my life and that he had two beautiful granddaughters. I didn’t want him to go through life with regrets or anything like that. If he wanted to get to know me, I was going to give him the opportunity. It’s what my grandmother had instilled in me.”