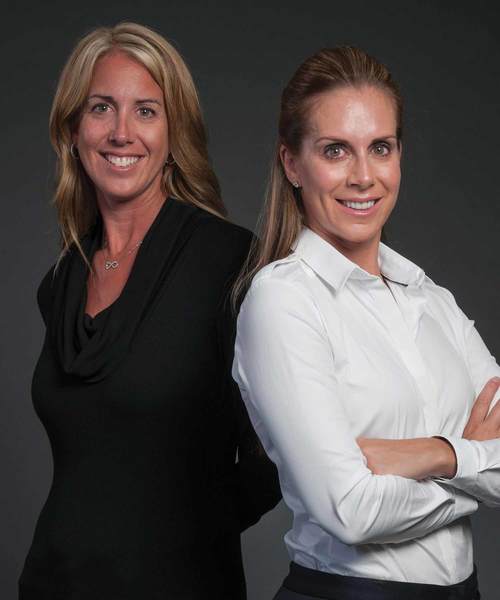 They’ve made the V Foundation a passion

Dick Vitale was talking about his family heritage. What, you expected a loss for words?

“I always say I owe two things to my mother and father,” he began. “Number one, never, ever believe you can’t. You can be what you want to be. Number two, my parents always used to say—they never called me Dick, it was always Richie—‘Richie, be good to people and they will be good to you.’

Them. Two daughters. Terri, the oldest. Sherri, a couple of years behind. From his house in Lakewood Ranch, Fla., Dick Vitale can drive five minutes one direction to see Terri and her family, and five minutes another way to see Sherri and hers. The Vitale Triangle.

It is a family with shared values, mutual love and one common foe. The chosen enemy is cancer, and they all have taken up the fight. There is the V Foundation, an effort so near to the heart of Dick Vitale, since close friend Jim Valvano died. There is also the Dick Vitale Gala, a Sarasota spring event that benefits pediatric cancer research, inspired when the Vitales came to know the family of Payton Wright, a little girl lost to the disease.

Hours and hours worked, millions and millions of dollars raised. And who knows how many saved?

If Dick Vitale is the renowned general of this fight, his daughters are two of his most trusted lieutenants. They work to connect the dots of his vision of a world with fewer cancer victims. They may not share his national microphone, but they have certainly come to share his passion.

You hear it from Terri, her voice breaking when she recalled the funeral of Payton Wright: “One of the most gut-wrenching things I’ve ever experienced in my life. I’m getting choked up just thinking about it. After that point, it became so personal for everyone.”

You hear it from Sherri, remembering the early days of joining her father’s effort: “After graduating from college and coming back to Florida and being around some of the families, you can put feelings to the people and their stories. Once that happens, it’s kind of inevitable that you just want to help and try to give back.”

They are not only the daughters of Dick and Lorraine Vitale, but also daughters of the University of Notre Dame. Both played tennis for the Irish in the 1990s. Both hold degrees from the MBA program. Both are married to former Notre Dame athletes—Terri to lacrosse player Christopher Sforzo, who is now a doctor; Sherri to football quarterback Thomas Krug, who is now a judge. Terri is second vice president of the Notre Dame Monogram Club, and will one day be president.

Together, they have given their parents a gaggle of grandkids—Terri has a son and daughter, Sherri twin sons and a daughter. Together, they seek to echo what they learned as daughters, and as Domers.

“People always think Terri and I are twins,” Sherri said. “We look alike. We act alike. We’re very much the same.”

The better tennis player? Gosh, whom to ask? “Sherri was probably a little better than me,” Terri said. “As much as it pains me to say that.”

But Louderback can also name a couple of important similarities. First, they were both at ease with a famous last name.

“They were comfortable with it. The person that it was hardest on was Dick,” he said. “When he would come and watch us play, people would mob him, and he wanted the kids on our team to be the focus. So he stayed away and didn’t watch a lot, and I know it killed him. This was before computers and scores, and he got to know the person at the front desk when we were playing an indoor match, and he had him relay to him how the matches were going over the phone.”

Also, both girls obviously had horizons beyond themselves.

“They did not care about any individual honors. They were so concerned about everything as a team,” Louderback said. “When you see kids like that, you feel that, as they get out and go later in life, they’re going to do the same thing there.

“They were focused on the future. They just weren’t looking day to day when they were here, which is what you get with a lot of college students.”

So the road to public service for two young women was well underway in college. It had started with their parents.

“My dad has always taught us to give back and lend a helping hand when you’re able,” Terri said. “I can honestly assure you that whatever I put in, I get more back than whatever I’m able to give.”

It was nurtured in the do-for-others atmosphere of Notre Dame.

“Once you’re at Notre Dame and live it and breathe it, and there’s an example of it every day,” Sherri said, “I don’t think you can help but realize the importance of giving back and trying to help others and not always put yourself in the forefront.”

And then it was transformed into a true mission by the cruel fates of others.

Terri had been on the corporate fast track in the advertising world, but when she took a job at Shands Hospital in Florida and saw the faces of kids waiting for transplants and waiting for miracles, she understood the campaign she wanted to wage.

Both women saw what Valvano went through—the pain of the disease, the anguish of their father, and the famous speech that Jim Valvano delivered in his final, darkest days.

“I remember him coming to our house when he was pretty sick,” Terri said. “I remember him wanting to swim in the pool and just do the simple things that any person would want to do at that point.

“My dad still recounts the whole story of the speech, when (Valvano) was literally vomiting and couldn’t stand up and was very sick, but somehow God gave him the strength to get up on that stage that night and give that speech. They made this promise to him that they were going to honor his legacy and never stop fighting cancer, and I can tell you my dad never has.”

They both saw the horrors of what little Payton Wright endured—in the end there was blindness and sobs from pain—and the agonizing helplessness of her parents.

“As a mother who had a daughter about the same age, I could relate on a personal level because their life was like a mirror of mine,” Sherri said. “Having a daughter about the same age, living in the same neighborhood, the same social circles. Watching them grieve, trying to support them as best we could. I think it was a big turning point for my dad, as well as all of us. We could see the reality of what this disease could do and how devastating it could be for families.”

And so, the Vitales went to work on cancer and have never stopped; the father called to action by the loss of a friend, the daughters inspired to join by the cries of a little girl.

Maybe on the outside the three are nobody’s idea of similar. The father is one of the nation’s most renowned megaphones. His girls are not. It was Sherri who mentioned, “Even at Notre Dame, when it came to participating, I’d always be the last one to raise my hand or the last one who wanted to give an oral presentation, where obviously my dad would have no problem with any of that.”

And it was Dick who said of the two, “They’re absolutely 180 degrees from me. They’re a spitting image of their mother, intellectually and physically, and I thank God for that every day.”

He has watched them join his cause, understanding that, as a cancer fighter, he needs every ally he can get. But more than that, he has watched with a father’s pride.

“I’m in a lot of hall of fames and had a lot of awards,” he said, “but the greatest moment to me was at my 70th birthday. Terri and Sherri threw a little party for me and they both spoke. They told all my friends, ‘We love him so much because he was constantly always about teaching us to do the right thing.’

“That meant so much to me, it brought me to tears.”

The fight goes on, for however long it takes. The father is not about to run out of purpose or passion. And neither will his daughters, who say they only follow his lead, his heart, his sense of being too blessed not to care about others.

“It’s not about me or Terri,” Sherri said. “It’s honestly about my dad. He’s the driving force behind this. When people come up and say, ‘Thank you for all your work. I’m a living example of research dollars and I’m here today because of that,’ I think that’s the reason he wakes up every morning, wanting to do more, to raise more dollars. At the end of the day, I hope and I honestly believe that people will hear his name and say, yes, he was a college basketball announcer, but he was so much more than that.

“I truly appreciate every day that my children are healthy, that all of us are healthy. I think that’s the part that hits home. You see people that don’t have that. You see parents who are living in hospitals to be by their children’s bedsides, just praying they can get up and walk that day. It’s hard not to look at your life and just thank God for what you have.”

And then the older.

“Jim Valvano’s daughter had breast cancer and she’s about my age,” Terri said. “In his speech that night, he said, ‘It may not save my life, but it may save my daughter’s life.’ Research and progress have saved her life. She’s a breast cancer survivor, and that’s our hope.

“I’ve been very lucky. I’ve had two amazing parents who gave my every opportunity to succeed. I went to a wonderful university and I’ve been blessed with a great family. The reality is I’m never going to be able to pay my parents back. I’ve kind of come to terms with that. But what I can do is what they’ve done for me, to pay it forward to others. Just looking at myself in the mirror at the end of the day and feeling good about what we did, if I can do that and teach my kids to do that, I feel like I did my job.”