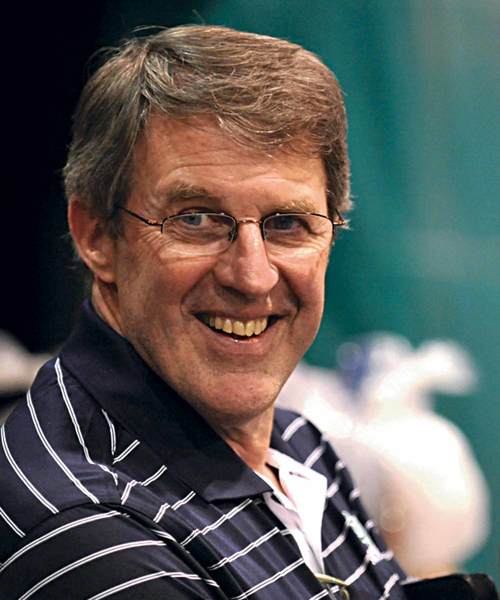 They call him coach, but that’s only the beginning

The spoils of a collegiate swimming coaching career spanning more than three decades include the expected trappings.

There are plaques and trophies and certificates and the normal paraphernalia you find in and around any athletic program.

That’s the end result when your teams win a couple of NCAA Division III championships (1978 and 1979 at Johns Hopkins) and 31 conference titles (four of the BIG EAST Conference variety). Throw in a national coach-of-the-year honor (1979) and four BIG EAST Coach-of-the-Year accolades.

There are lengthy lists of fast times and splits and records broken, and yet none of that really tells the story of what Tim Welsh has been about since he came to the University of Notre Dame in 1985 to coach both the men’s and women’s swimming teams. Here’s what you need to know about Welsh, who may look more like a college professor but remains as quietly competitive as anyone you’ll find: Talk to longtime Notre Dame athletics photographer Mike Bennett (who takes all the team photos of Irish athletic squads) and he’ll tell you that the Irish men’s swim team is the only one that outfits itself in coats and ties for that ritual.

Talk to men’s swimming administrator Mike Danch who has been to dozens of Notre Dame team banquets over the decades. Says Danch, “Tim is the only coach I know who, at his season-ending banquet, gives every one of his graduating seniors a book that somehow reflects their relationship. Conversely, the seniors give him a book that reflects something they’ve learned along the way.”

Talk to longtime Irish assistant coach Matt Tallman and he’ll unabashedly suggest that Welsh is the “greatest human being there is.” Adds Tallman, “He goes way out of his way to make sure that everybody he comes in contact with gets whatever it is they need.”

Wander around the Joyce Center, and when you encounter Welsh he’s likely to be wearing a tie, favors a green sports coat and often dons his signature cowboy hat (there’s a sign in his office that says “Cowboy Up”). He rides his bicycle to work most days the weather is decent.

Spend a little time with Welsh and you’ll know that he has an exact understanding of what the student-athlete concept means. Maybe it dates back to his Division III years when, especially at a place like Johns Hopkins, the student part often outpointed the athlete part—but it doesn’t seem to be anything close to an accident or coincidence when his Notre Dame teams earn academic awards.

“I think it really pains him if his team is not in that 3.3 area in terms of grade-point average,” says Danch.

“He’s always the one keeping track of that GPA and the curriculum of his swimmers.”

Welsh absolutely loves the team-building aspect of his job.

“Every coach cares about the kids,” says Danch, “but I sense that Tim takes special care with that aspect of the program.”

Every year Welsh opens his season with a team Mass at the Grotto in the middle of the Notre Dame campus. The Mass is followed by a team dinner after which members of the squad stand up and talk about their goals for that coming season.

Welsh goes about the business of running his team in a particularly purposeful manner.

“He’s extremely thoughtful about what he says to the kids,” says Danch.

“There was a big celebration going on and everybody was making plans for dinner and what they were going to do that night. Tim wasn’t worried about that—he was picking up trash and wet towels around the deck of the pool,” he says.

“It’s no different at any other meet. He says ‘Thank you,’ to every single person involved after every single meet.”

Welsh sees the big picture as well. He still stays in touch with his predecessor Dennis Stark, who headed the Irish swim programs for 27 years (the 2011–12 season is Welsh’s 27th at Notre Dame).

After the United States and Michael Phelps won the 4x100 freestyle relay at the 2008 Summer Olympic Games in Beijing—with Jason Lezak coming from behind in amazing fashion in the anchor leg to win by eight-hundredths of a second—Welsh made Lezak the honorary recipient of one of the Notre Dame team awards, sought him out and presented it to him.

Like it or not, Welsh’s time at Notre Dame has been defined by the January 1992 bus accident that killed two members of his Irish women’s squad that was returning from a meet at Northwestern.

Every year, usually on the anniversary date of the accident, Welsh brings his entire team onto the pool deck of the Rolfs Aquatic Center before practice and relates the story of the bus crash. It’s his way of ensuring that his current team members understand the historical program perspective brought about by that horrific event.

In many ways, Welsh is forever joined at the hip from an experiential standpoint with Haley Scott, the freshman Irish swimmer who was temporarily paralyzed in the accident and miraculously recovered to swim again—and penned a book about her comeback (a project that now has blossomed into a film that is expected to be shot on campus, with Ed Harris mentioned as the actor to play Welsh).

Welsh was so concerned about his team’s ability to re-enter the team bus after the accident that, before the squad’s next road trip, he had the women swimmers take a practice ride around the parking lot a few days in advance to ease the anxiety level.

One particular anniversary of the accident featured another meet at Northwestern, and Danch rode the bus in snowy conditions with Welsh and his team.

“Tim was the last one to leave the bus after we arrived,” says Danch.

“He stayed on the bus by himself and said a prayer.”

Says Tallman, “You’d like to think you know what he’s gone through, but I don’t think you really can know. He’s still kind of hurting a little bit every year for those few days.”

Says Danch, “He’ll never forget what that was about. I don’t think it’s possible for him to bury it away.”

A devout Catholic, Welsh bleeds Notre Dame in whatever he does—and his team members reflect that on the road, in the dining hall and wherever else they go. His swimmers seem to have a grand appreciation for what they’ve received from their four years around their head coach.

“Somehow my email seems to be the easiest one to find,” says Tallman.

“So I’m always getting emails, that are really for him, from people saying, ‘I’m going to be in town and I want to come by and see Tim and so make sure he’s there.’

“They know on a football weekend they can come down to the pool deck and he’ll be there.”

Welsh has been a part of a long list of leadership positions in his sport and is as well respected as any coach in the business: In 1993 he received the Richard E. Steadman Award from the Collegiate Swimming Coaches Association of America, an award that goes annually to a swimming or diving coach who has done the most to spread joy and happiness in swimming.

He served as president of the American Swimming Coaches Association in 2009–10 and 2010–11 and received the ASCA Bob Ousley Award for Service in 2002 for dedication to his profession. He also received the CSCAA’s Distinguished Service Award for his 35 years in college coaching. He has worked tirelessly developing various swim coaches education programs and has traveled all over the world in support of those programs.

Welsh was one of two to receive the 2009 Presidential Values Award that honors Notre Dame employees who best exemplify the University’s core mission and values of integrity, accountability, teamwork, leadership in mission and leadership in excellence. The award citation noted the time Welsh, at the BIG EAST meet, lent high-tech swimsuits to another conference team that had not brought enough for its swimmers.

He’s also a former chair of the prestigious NCAA Swimming Committee and was a member of the committee from 1991 to 1997. He has been president of the BIG EAST Conference swimming coaches group since 2001.

Welsh originally came to Notre Dame to coach both the men’s and women’s programs, neither of which had much of any scholarship help. In 1994–95, his final season as the Irish women’s coach, the Irish finished with a 14-1 dual-meet mark. Now, as he heads up a men’s program on the verge of breaking out nationally (and with the full NCAA complement of scholarships), Welsh hasn’t changed much about the way he does business.

Says Tallman, “I think back to when I came to interview for my job here. You knew leaving here that you wanted to work with him and for him. 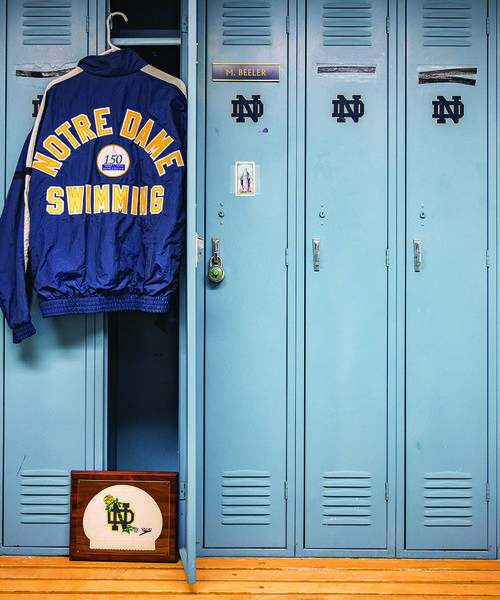 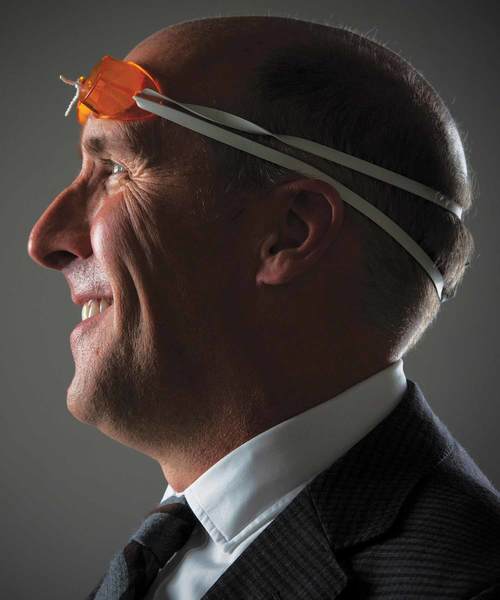