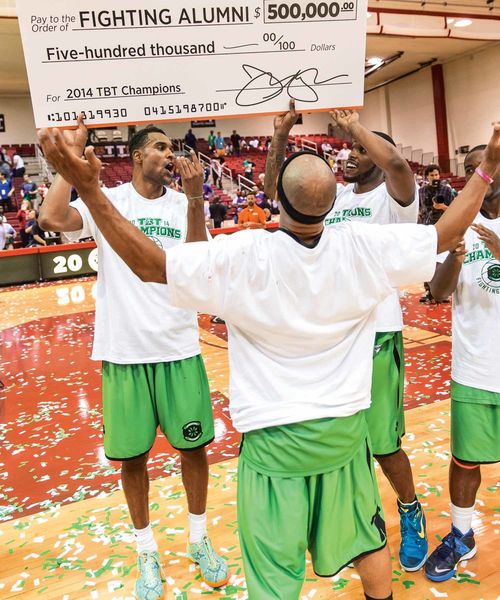 Early on during the second game of “The Basketball Tournament,” the inaugural, single-elimination, $500,000 winner-take-all competition that took place in Philadelphia and Boston last summer, I leaned over to Kieran Piller, our Notre Dame Fighting Alumni general manager and coach, and told him that I was starting to get this feeling that we were going to win the whole thing.

Now I have no idea what I said to Kieran when we were down 17 points in the first half during game three, but I don’t recall much, if any, panic. Clearly the opposing team hadn’t yet realized that we were a team of destiny, that we’d been in similar situations together before, that the “Basketball Gods” were on our side.

In retrospect, it’s obviously quite easy to say I called it, but that doesn’t take away from the feeling of inevitability that surrounded and permeated our path to victory. It seemed scripted, fated. It took me back to film sessions with coach Mike Brey, and anyone who has ever had the good fortune to take part in one of those sessions knows certain intimate details about his idiosyncratic tendencies and personal philosophies. For starters, he either has no idea how to use a remote control or he just despises the pause button. Watching him hover over a certain play with the repetitive tapping of rewind is enough to induce a certain type of motion sickness.

The more important takeaway, however, revolves around his complete reverence for the invisible and aforementioned deities collectively referred to as the Basketball Gods. I never stopped to question—either myself or Coach—whether said “gods” were more of the “Legends Passed” variety (the Wilt Chamberlains and Pistol Petes of other realms), or whether it was more of an animistic lean: the Basketball God of Three-Point Shooting, the Goddess of the Give and Go, and so on and so forth.

Either way, the Basketball Gods would be summoned and deliver judgment any time Coach was especially pleased with a particular stretch of game film. Good ball movement, good screens, good passes, unselfishness … he would become so overwhelmed by the beauty of the play that he would stop his regular commentary and instead pay verbal homage to the out-of-sight overseers: “You know what, I knew that shot was going in … that screen, the extra pass … the Basketball Gods owed us on that one,” he would often say in his trademark drawl.

As the class clown that I was and possibly still am, I stored away these sound bites as Breyisms used to explain mere coincidental plays, and by doing so completely missed the point of what he was actually saying. And what I think he was saying at those moments was that by recognizing and more importantly respecting such coincidences (the Basketball Gods), you humble yourself, you go outside yourself; you take an active role in creating positive meaning that binds the group together. You remove the “mere” from “mere coincidence” and replace it with a value of connectedness, of causality, of importance. Instead of burning down the building, you give it light.

Playing in and winning that tournament, at the outset just an excuse to get back together for a weekend, ended up being so much more than that. It was a platform for us to rekindle our former collective identity, to remember what it used to be like to be us, to be together, to be supported by so many different groups of people. It was seeing people improve, to see them change, but to still have those qualities that made each individual tick.

Being able to reunite that many Notre Dame personalities, that many former teammates, was something we could never have anticipated. Yes, we still remain in contact across the country, across continents, but nothing can replace actual time spent in the same space, working toward the same goal, and doing so was such a fantastic refresher as to what it means to be part of not only the Notre Dame basketball community, but the Notre Dame community at-large. It was the type of feeling that can only come from being wrapped up, vested, active in such a tightly knit group.

It was the mentality that “if I eat, everyone eats,” and knowing exactly who needed to be fed up front, in both a figurative and literal sense. (Tyrone Nash led us not only in scoring and rebounding, but possibly set a record for number of hamburgers eaten in one sitting.)

It was having Harold Swanagan, current director of basketball operations and former power forward, recruit players and connecting us where we needed to be connected. It was Fighting Irish Digital Media promoting us everywhere on social media.

It was Ryan Ayers’ mother, Carol, grilling for us the night we arrived, not to mention hosting us for three nights like an extended slumber party for 12-year-olds; it was Ryan’s father, Randy, flying in and taking a break from his NBA duties in New Orleans to see us play; it was Rob Kurz’s parents taking us all out to dinner after our huge semi-final win. It was Mary Agee, Rob’s wife and Notre Dame alumnus, making us the most delicious and thoughtful snack well into the wee hours of the night. It was Coach Brey treating us like kings the night before the final.

It was Luke Harangody and Tim Abromaitis coming into town, unable to play but very capable of sharing stories and cheering us on; it was Kyle McAlarney and his wife Meg driving down from New York and celebrating with us; it was having guys like “White Mike” Bramante, Notre Dame Class of 2010 and by all measures this generation’s version of Ed O’Rourke, travel to Boston for the final game. It was sharing memories of the late O’Rourke, easily one of the truest Notre Dame basketball fans who ever lived.

It was exchanging calls and text messages with all the people that couldn’t be there but wanted to be. It was walking my grandmother through the step-by-step process for finding and watching ESPN3.

It was having Kieran’s family there—his mother, his sister, his brother-in-law—just a couple months after losing his father to cancer. It was then being able to turn right around and donate a portion of our winnings to Coaches vs. Cancer. Say what you want about coincidence, but I’m a pretty big fan of that one.

The day I graduated from Notre Dame was easily one of my least favorites. Aside from looking ridiculous in cap and gown and being completely exhausted from the events of Senior Week, I was headed out into the world, directionless. In fact, the only directions I gave were to my mother, sister and grandparents, and that was to take me to Rocco’s so I could eat my feelings … a large half-pepperoni/half-cheese pizza of feelings.

But it wasn’t the near total lack of direction that bothered me; it was the fact that all my friends, my teammates, my brothers from so many different mothers, were all headed their own ways. It was the realization that my identity was closely tied to my relationships with these guys, the best friends I had ever had.

Looking back on this past summer, it’s still hard to believe that this all really happened, and how truly grateful I am—we all are—to still be part of each other’s lives, to be part of Notre Dame, to still get to represent a University that has given us so much and continues to do so. And even though we will continue to go our own ways, we can always look forward to those moments where our paths will undoubtedly cross again, to creating new memories and sharing old ones, a commitment to always being there for each other, no matter what happens.