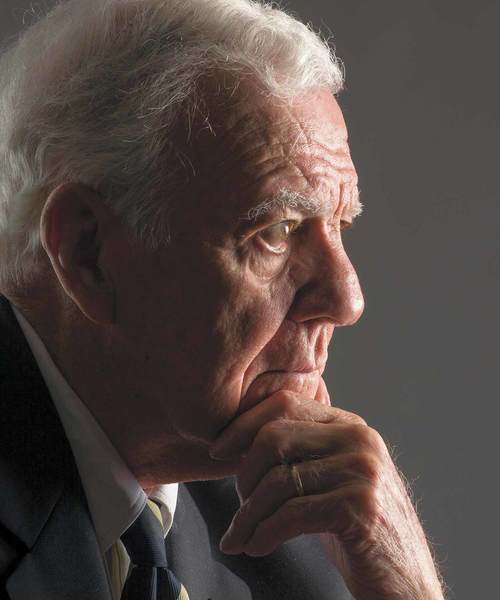 A different sort of battle

Cane now in hand, Ara Parseghian will occasionally pull to a halt in his south bend home’s hallway where many of the family photographs hang on the wall.

“That’s when I take time to review our lives,” says the 92-year-old Notre Dame football legend. “It reminds me of who we are and what has happened.”

Tears sometimes well in his eyes. Memories that these pictures conjure up can scramble his emotions and cut him like a knife.

Three years ago, he and his wife, Katie, lost their daughter Karan to multiple sclerosis after three of their grandchildren—Michael, Christa and Marcia Parseghian—died of Niemann-Pick Disease Type C (NPC), a rare genetic disorder.

“You should never have to bury your children or grandchildren,” Katie Parseghian says.

But yet it happened to them. Four horrific and heart-wrenching times.

“Sometimes, over the years, when I was in the car and alone with my thoughts, I just wanted to pound the windshield out,” says Ara, who led the Irish to two national championships and a 95-17-4 record during his Hall of Fame career.

Yet he took that rage and anguish and turned it into a positive force. When Karan was diagnosed with MS more than 40 years ago, he served on the national board for the National Multiple Sclerosis Society.

And when his son Mike and daughter-in-law Cindy received the devastating news in 1994 that three of their four children had the debilitating and terminal Niemann-Pick Disease Type C (NPC), he helped create the Ara Parseghian Medical Foundation in an effort to find a cure.

He and his family worked tirelessly, raising millions of dollars for research and labs. He helped make NPC—sometimes referred to as an orphan’s disease because its rarity makes it easier to put it on the back burner—become more than just a paragraph in medical books.

Ara was 71 at the time of his grandchildren’s diagnoses, and he took on a demanding schedule reminiscent to his coaching days. He was crisscrossing the country, speaking at medical seminars and conventions and swimming laps in the pool to work on his stamina. His wife, Katie, encouraged him and helped keep him strong.

“My parents never asked, ‘Why us?’” says Kris Humbert, the Parseghians’ middle child between Karan and Mike. “My dad has always said adversity elicits talent that under normal conditions would have remained dormant.”

“Maybe God put us on earth for this purpose,” Katie adds.

Partly because of the Ara Parseghian Medical Foundation, the first of two genes that carry the disease was identified in 1997. Scientists in dozens of labs, partly financed by the foundation, continue to work diligently in an effort to find a cure.

Ara was already familiar with the grinding process of medical research after his work with the MS Society. “You desperately want them to come up with a silver bullet, but it doesn’t work that way,” he admits. “Medical research has to move at a very slow pace, and that is very tough when you want to have a cure immediately.”

A large family portrait of the Parseghians’ family hangs in Ara’s study. It was taken at his 75th birthday celebration in 1998. Katie cut out a picture of their grandson Michael and added it to the empty spot in the front row. He had died the previous year at the age of 9.

And the nightmare was far from over.

Christa succumbed to Niemann-Pick Type C in 2001. She was 10. And Marcia fought the good fight past her 16th birthday. She died in 2005, but not before she was able to serve as one of her cousin’s bridesmaids and continued to keep as active as possible in such activities as ballet and martial arts.

At the end, the three younger Parseghian children (older brother Ara—named after his grandfather—was not afflicted) were not able to speak or walk. NPC, an inherited cholesterol metabolism disorder, can eventually rob its young victims of memory and balance. It causes organ failure and seizures.

One in about 150,000 children is afflicted with this disease. “It wasn’t that long ago that parents could find hardly find anything on NPC,” Ara says. “Now, through the foundation, they have a place to call with questions and can find out where we are with the research.”

The Parseghian family continues to work for the cure through the foundation with Ara as the well-known flag bearer and his daughter-in-law Cindy as its president. More than $45 million has now been raised and about half of the 50 labs that are working on a cure are financed by those proceeds.

In recent years, the University of Notre Dame has become a partner with the Ara Parseghian Medical Foundation, helping to raise funds and connect with worldwide collaborators while also having the University’s Center for Rare and Neglected Diseases as a resource.

And it was Notre Dame researchers Paul Helquist and Olaf Wiest who identified one of the three promising drugs to use against NPC. Theirs is from a category of drugs known as HDAC inhibitors (Histone Deasetylase Inhibitors) that could be used as a potential therapy for NPC. A Phase 1 clinical trial is currently underway.

“If HDAC is approved as a NPC therapy, it will be as good as Notre Dame winning a national championship,” says Cindy Parseghian, a 1977 Notre Dame graduate, along with her husband Mike.

The Parseghians can’t say enough about the partnership with the University. “I never dreamed we would one day be hooked up with Notre Dame,” Ara says. “I really feel good about that. Because of Notre Dame’s involvement, I can’t tell you how many people have told us that they have lit candles and said prayers for our family and foundation.”

“Our children—and all the NPC children—are now Notre Dame’s children,” Cindy adds. “We are so thankful to the Notre Dame community and that they continue to help us on our journey.”

The Parseghians are especially appreciative of Greg Crawford, vice president and associate provost at Notre Dame. A physicist by profession, he not only has used his skills as both a scientist and fundraiser for the cause, but he has made several cross-country bicycle trips to raise money and bring attention to the battle against NPC.

“It’s almost as if he dropped right out of heaven to help us,” Ara admits.

During the summer of 2015, Crawford rode from Long Island, New York, to Pebble Beach, California, compiling some unbelievable numbers: 3,500 miles and $1.2 million in donations for the foundation.

Crawford was a fan of Ara long before he came to Notre Dame. “Growing up in Ohio in the early 1970s, I always wanted to play football for the famous coach Ara Parseghian,” he says. “After middle school, there was no football in my career and I became a physicist. Years later, in 2008, I was able to join Notre Dame as dean of the College of Science, where the focus on rare disease research led us to close collaboration with the Ara Parseghian Medical Research Foundation.

“Ara’s grace, his perseverance and his optimism in the search for a cure for Niemann-Pick Type C inspired me so much that I started riding my bike across the country to raise money and awareness for the cause—finally logging five trips and more than 14,700 miles. It was a dream come true to experience his leadership, not on the football field but still under the Golden Dome.”

Ara doesn’t ride a bike, but he does work at staying in as good as shape as possible for a guy who is 92 and has undergone multiple knee and hip replacements over the years. He does his daily exercises and has his five-pound hand weights at the ready beside his easy chair.

The irony is not lost on Ara and Katie Parseghian. They continue to live a relatively healthy life well into their golden years while three of their grandchildren were taken so early.

Ara can no longer get down into the basement or do any yard work, but he still can get to various fundraisers in an effort to honor his grandchildren’s memories and help those youngsters who continue to suffer with NPC.

“I’m no longer the head coach of this effort,” he admits, deferring to his daughter-in-law Cindy, the president of the foundation, and the Notre Dame scientists and fundraisers. “I guess I’m an assistant coach—or maybe just a graduate assistant now.

“The challenge will always be there, though, and when you have been a competitor, that doesn’t go away—especially when it involves your role as a parent or grandparent,” Ara continues. “You grieve but you carry on.”

“He has been the heart and soul of our fight from the start,” Cindy says of her father-in-law. “Even at 92, he continues to push the foundation forward. And the deep love that Notre Dame has for Ara has been very important to our cause.”

Does Ara plan on making it to 100? “Hell, yes,” he states in no uncertain terms and with those steely eyes flashing.

But he sometimes takes that trip down the hallway with all the family pictures and wonders to himself, “When will my last picture go up?”

He studies those photographs on the wall and measures his life. So many sad chapters go along with his extraordinary accomplishments. A cure for NPC would certainly make his final chapter a happier ending.