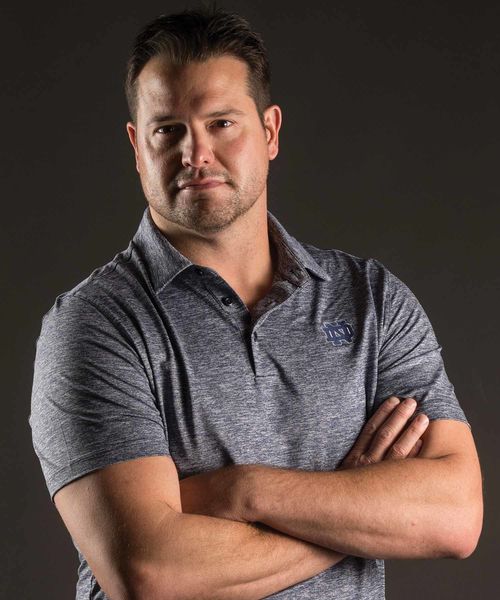 We civilians of these United States of America have been living with gratitude to the military for more than 14 years now, ever since giant buildings fell and nearly 3,000 people died on Sept. 11, 2001, in a place where that sort of thing just couldn’t happen.

In those 14 years since, we have paid tribute in hundreds of ways. With giant flags at sporting events. With applause on airplanes when the captain says the soldiers on board are heading to the Middle East.

That is, until you meet Bill Wagasy, a 1996 University of Notre Dame graduate, reserve outside linebacker on three of Lou Holtz’s Irish football teams—and a Navy Seal for 10 years.

The impression is immediate, almost overwhelming. He is all jaw, rock hard, set with determination, every ounce of him still ready to protect and preserve. You feel safer just eating lunch with him.

Wagasy is no longer in the military, but one look and five minutes of conversation make it quite clear.

Wagasy is 42 now, and loves and appreciates Notre Dame as much as ever. It built the foundation upon which he became what he was meant to become.

“It was the Lou Holtz mental approach,” Wagasy says, “the no coddling. That got me through the military.”

His story wanders from high school stardom in Springfield, Missouri, to the selection of a full scholarship at Notre Dame over one at USC, to the disappointment of not being an Irish regular.

“After five years at Notre Dame,” he says, “my tank was empty. It was where I came with a big dream and where I ended up with big disappointment. There was a good chance I wasn’t going to the NFL. I had to realize the dream was over and I had to find a new one.”

He applied to 11 different law schools, and one that accepted him was Notre Dame. But it was time for this young man to go west.

“I choose by latitudes,” he says.

Soon, he was immersed in law books by day at Pepperdine and the wonders of Sunset Strip by night. In his first year of law school, he was in the top 11 percent of his class. But then, school had never overwhelmed somebody who had played major college football full time and still graduated from Notre Dame with a degree in accounting and with a second major in philosophy.

By the spring of 2001, Wagasy had his Pepperdine law degree, plus an additional master’s degree in dispute resolution. This was all valuable, but also turned out to be wheel-spinning. He was headed elsewhere.

“When I was in high school,” Wagasy says, “I told a friend I was going to be a Navy Seal. My family had always been supportive of the military. At Notre Dame, I talked a lot to the ROTC guys. I kind of liked to hang around with them.”

The seed was there.

With a law degree, the usual next priority is to study for the bar exam. Wagasy did that, but he also did something else. He joined the Navy Reserves and spent one weekend a month training near San Diego. Again, he found he had an affinity with the soldiers he met around Camp Pendleton, so he hung around a bit.

He also did not tell his parents about joining the Navy Reserves.

“No real reason,” he says now. “They were always supportive of the military. I guess it was just my thing.”

And then, the phone rang on the morning of 9/11. Wagasy was living in a room with no television, so it took him awhile to process what his friend was saying, that his friend’s brother was in the South Tower of the World Trade Center and they hadn’t heard from him.

Once Wagasy found a TV and let it sink in, not even knowing at this stage that his friend’s brother would die in the South Tower, he says his emotions ran amuck.

“It was everything,” he says. “There was anger, rage, sorrow, astonishment, disbelief.”

There was also immediate commitment. He would do what he always said he would, of what he always secretly dreamed. He would become a Navy Seal. He saw it clearly, felt it strongly, knew it was the right thing.

“When the emotion involved becomes far greater than the fear of what-if,” he says, “then nothing holds you back.”

Not even calling your parents, telling them you have been in the Navy Reserves for months and that, now, you were going to do everything possible to become a Navy Seal, to dedicate your life to going off to the most dangerous places in the world.

“They were supportive,” Wagasy says. “My dad even said he wasn’t all that surprised, that if he was young enough, he would want to go, too.”

And so it began, and it was never easy.

First, you don’t just walk into a Navy recruiting office and announce you are going to sign up to become a Navy Seal. Nor are they used to having somebody 6-foot-4 and 240 pounds—about 60 pounds heavier than the usual Seal—and with three college degrees, including one in law, walk in and make such a pronouncement.

He was too old. He made the age 30 cutoff by about a month. He was also too educated, too heavy and too untraditional a candidate for the Navy to nod and say, “OK, let’s begin.”

Thanks to a recruiter who saw the fire in Wagasy’s eye, they also didn’t flat-out say no. It was a three-year process to make it. He battled, both physically and politically.

“I built a network of people to help me get this done,” he says. “It was coast to coast.”

Still, he was a long shot, an easy target to get cut from the program if he gave them even the slightest opening. During boot camp, he says he went through one stretch where the skin on his head wore off from carrying a boat through water, that when he finished he couldn’t even recognize if he had knees.

“In one training period,” he says, “we had one hour of sleep in five and a half days.”

“Sometimes, when I’d be running,” he says, “they’d pull alongside in a truck and tell me just to quit and go be a lawyer somewhere.”

But his Lou Holtz days, his Notre Dame mind over matter, won out.

“When you are going through this,” he says, “your mind is screaming at you to quit. But you can’t let fear turn to panic. You have all these crazy thoughts, like maybe you’ll die and be done with this.

“You have all these conversations with yourself. One of mine went that I signed up for this, to go to war, where you might die. But that is OK, because my cause is just and if that happens, my friends and parents can bury me with honor.”

He didn’t quit. His parents came to his Navy Seal graduation and soon, in 2004, he was in Iraq on his first deployment. He went back for nine more months in 2006, and when he returned home, his father, a dentist in Springfield, asked him if he might stop these deployments.

“You mother and I are getting older,” the senior William Wagasy said.

Bill Wagasy went back twice after that, the final time to Afghanistan, returning in 2009.

In 2006 in Iraq, his truck hit a roadside bomb, which blew straight up and destroyed the front of the vehicle, but missed injuring the inhabitants. In 2008 in Afghanistan, his vehicle rolled over in an accident and he shattered a wrist and injured a shoulder.

It wasn’t just a throwaway line. He had buried a close friend during one deployment.

He left the Navy in September 2011 and eventually became the director of veterans’ outreach for the foundation begun by actor Gary Sinise. That involved making speeches, finding veterans in need and dealing with the tragedies that war had brought to their lives and families.

“The people we sent,” Wagasy says, “were the strongest and bravest America had to offer. The next moment, they were the most helpless.”

Wagasy has a new job now. He lives near the beach in Los Angeles and is a vice president of national sales for Commonwealth Land Title Company.

But his identity, his very essence, isn’t in sales. At least not yet. You look at the hard jaw. You see the fire in his eyes as he talks about the military and the people with whom he served. You feel the enthusiasm as he speaks with pride of the duty he carried.

You are clear what the essence of Bill Wagasy is right now and will be for the foreseeable future.

He is a Fighting Irish Navy Seal.