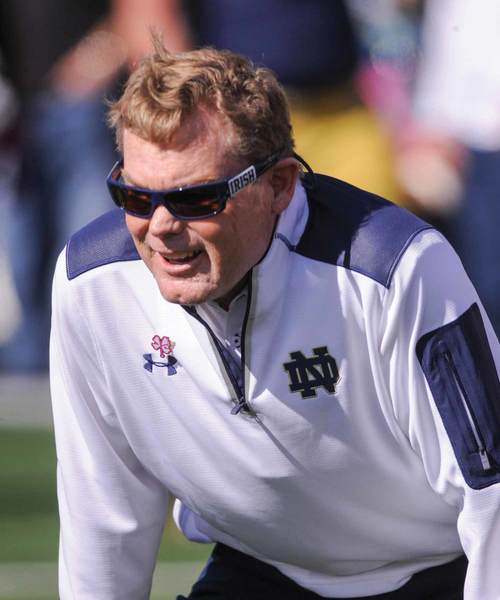 Out of the night that covers me,

Black as the Pit from pole to pole,

I thank whatever gods may be

For my unconquerable soul.

In the fell clutch of the circumstance

I have not winced nor cried aloud.

Under the bludgeonings of chance

My head is bloody, but unbowed.

Beyond this place of wrath and tars

Looms but the Horror of the shade,

And yet the menace of the years

Finds, and shall find, me unafraid.

It matters not how strait the gate,

How charged with punishments the scroll.

I am the master of my fate:

I am the captain of my soul.

When Bob Elliott, a member of the University of Notre Dame football coaching staff from 2012 through the 2016 season, passed away in July, his family held a celebration of his life in Iowa City, Iowa.

That made sense because Elliott was born in Iowa City and was a 1976 University of Iowa graduate, former Hawkeye football player and later an Iowa assistant football coach.

Yet, anyone who spent time around Elliott understood that that service could just as easily have been held in any of the other locations where the career football coach spent time and influenced people—from Lincoln, Nebraska, to South Bend, to Ames, Iowa, to San Diego, to Manhattan, Kansas, to Chapel Hill, North Carolina, to Muncie, Indiana, to Kent, Ohio, to Ann Arbor, Michigan.

The dozens of head coaches, assistant coaches, players, athletic administrators and other athletic colleagues who came to pay tribute to him July 15 said as much. Elliott—son of Bump Elliott, former athletic director at Iowa and head football coach at Michigan—grew up in a football family and obviously learned that craft well.

Former Irish defensive back Matthias Farley was among those who spoke at the July 15 Iowa City event.

He recalled sitting disconsolately in Elliott’s office one day in South Bend and wondering why life on the football field wasn’t working out better.

For the first time he noticed the poem “Invictus” framed on the wall behind Elliott’s desk.

“Have you heard it?” Elliott asked him.

“Yeah, it’s a great poem,” offered Farley. “I have the whole thing tattooed on my back.”

Responded Elliott with a straight face, “You could’ve just memorized it.”

Farley knew that day that he and Elliott were on the same page.

Farley and former Irish linebacker Joe Schmidt were there in Iowa City the night Elliott died. That’s what their relationships meant. Schmidt referred to him as “the ultimate players’ coach. He always found a way to make you feel valued.”

Elliott provided a perspective others didn’t always have. Part of it came from his varied experiences in football. Another part came from the not-so-great hand dealt him years ago in the personal health department.

Elliott spent nearly 20 years dealing with blood cancer. In 2012 he had a kidney transplant. He handled a bone marrow transplant (in hopes of beating a rare condition known as polycythemia vera), chemotherapy, radiation and daily dialysis. He never asked for sympathy. He never lost his feel for dealing with the radical ups and downs in his players’ lives—and he treated the stars and the walk-ons with the same cordial respect. He had the appropriate response for whatever came his way.

Lots of people called him Bobby. Others referred to him as “Coach E.”

Whatever the name, he made a difference.

Elliott came to Notre Dame because of Diaco, the former Irish defensive coordinator. Diaco needed a new secondary coach heading into the 2012 season when Chuck Martin flipped sides of the ball to become the quarterback coach and offensive coordinator. So, who better to fill the role than Diaco’s collegiate position coach? And it certainly didn’t hurt that two other Irish staff members—Tony Alford and Kerry Cooks—were Elliott disciples.

That very first year saw the Irish parlay a 12-0 regular season into a spot in the Bowl Championship Series title game. Elliott had coached in 14 previous bowl games, but that one qualified as a highlight.

Elliott stepped off the field in 2015 and 2016 to become a special assistant to Kelly. But he never lost the coaching bug. When Diaco, now with the Huskers, called to offer him a slot coaching the Nebraska safeties, even with his physical maladies and knowing that meant he likely would be headed back out on the recruiting trail, he snapped it up.

Notre Dame director of player personnel Dave Peloquin spent plenty of time with Elliott in their days together at the Guglielmino Athletics Complex. They often shared what Elliott called his “working lunch.” Peloquin knew Elliott, the donut connoisseur: “There was not a donut in South Bend he would pass up.” He knew the Elliott who wanted to know what he was missing in the world of politics while he’d been busy trying to solve the local football problems.

“His big thing was, ‘Feed the positive dog.’ We drew the face of a dog in a doghouse on the board in here. He put out a lot of fires. Guys would come in his office all excited about something, and his typical response was, ‘Just chill.’ He had a great presence and way about him—I never saw him overreact to anything. Whatever it was, it was important, but just take a step back.”

Peloquin has held onto a recent voicemail that came while Elliott was on the recruiting trail in Blue Island, Illinois, Peloquin’s hometown. Elliott liked to kiddingly call Dave the mayor of Notre Dame football, in part because Peloquin’s father actually was the mayor of Blue Island for three decades.

“There was no football, it was kind a voluntary spiritual prayer service. It turned into a lot of stories about people’s lives. One time we had all the graduate assistants, all the young guys there, and Bob went over his career. He probably was in line at one point to become the head coach at Iowa, and then his sickness changed his whole outlook on how he coached and interacted with players. It was eye-opening. He was just a battler—and there wasn’t a dry eye in the place.

“One of the speakers at Elliott’s service talked about Bob’s fighter pilot mentality. He was always attacking in everything he did. When we were coming home, Coach Kelly showed us the last text he received from Bob, and he’d texted Bob back and said, ‘I know a fighter pilot like you attacks it every day.’ That was perfect.”

Elliott married his college sweetheart, Joey, and she was a rock while helping him handle his illnesses.

“He loved this place,” says Peloquin. “You’d see him walking his dogs over at Eddy Street Commons where he lived. He loved his time here.”

Maybe happenstance put me in the seat next to Bob Elliott on almost every charter flight to football road games during his time in South Bend.

We seldom talked Notre Dame football. As mid-1970s graduates of Midwestern universities we shared lots of stories of people we knew in common, some from both of our days in the old Big Eight Conference. He always quizzed me about what was going on with the administrative end of Notre Dame athletics, about what was going on in college sports at large that he might have missed while caught up in the day-to-day intensity of his own job.

Former Iowa athletics director (and current Big 12 Conference commissioner) Bob Bowlsby said, “His coaching of football players was everything that is good about college athletics. His legacy is the hundreds of young men out there in successful careers and families because of his influence.”

Offered McCarney, “Bobby defined every day how he wanted to be remembered, and that was never be pretentious. Don’t be a phony. Be genuine.”

After Elliott died, current Irish senior Drue Tranquill tweeted, “Your love never wavered. You poured your heart and soul into the lives of your players, the people around you and the game of football. You’re a true legend in my books.”

Added Irish linebacker Nyles Morgan, “You saw more in me than I saw in myself at times. You were always there to pick me up whenever I struggled.”

And that’s the way he wanted it to the very end.