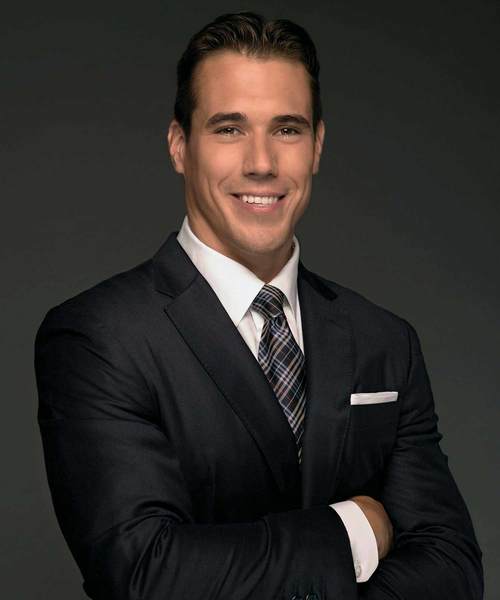 Converting on third and goal

Nearly a decade after his graduation from the University of Notre Dame, Brady Quinn has come to realize that his decision to enroll might have been simpler than he thought.

From his childhood, the influence of a commitment to service has framed his life. His father, Tyrone, was in Vietnam as a Marine. One grandfather fought in World War II.

“The appreciation I had for the military services growing up led me in a way that I didn’t recognize until I got older to want to go to Notre Dame,” Quinn says, “because of that desire the University has to give back.”

He was the quarterback and two-time captain during a period of resurgence that saw the Fighting Irish win 19 games in a two-season span, reach the Fiesta and Sugar bowls and rise to a ranking as high as No. 2.

Quinn’s total yardage established school records for a season (4,009 in 2005) and career (11,944). In 2005 and 2006, his last two years, he set single-season records for attempts (467), completions (292), passing yards (3,919) and passing touchdowns (37). Quinn was a focal point of national attention, so much so that there were times when he discovered profit-seeking collectors waiting for him on campus to ask for autographs.

Yet for all the demands Quinn faced, he developed an awareness of peers within the University community that somehow found a way to devote themselves to others.

“You saw other people who were still able to manage their time and prioritize it to make sure that giving back in some fashion or form, serving others, was accomplished,” he says. “They would go about their day, prioritizing different things. At Notre Dame, the character of a lot of people there, whether it was the faculty or the students, they have a similar mindset. They wake up each day thinking about others, and not necessarily themselves.”

That outlook would eventually lead to the creation of 3rd and Goal Veterans Home Aid, a foundation that has helped veterans cope with the physical, psychological and financial hardships that followed their military service.

The inspiration could be traced to 2010, when Quinn was traded from the Cleveland Browns to the Denver Broncos before the start of his fourth National Football League season. A visit with veterans during Denver’s training camp would leave Quinn with an impression that would change his life and others.

“I started to realize there was a need for doing adapted housing for those that were coming back from Iraq and Afghanistan,” Quinn says. After that day in training camp, he called his father. He remembers saying, “There’s got to be something we can do. There’s got to be a way that we can help some of these guys with some of the things they are facing.”

The name—3rd and Goal—was the link to his professional life. Quinn’s thought was that those situations created some of the most decisive moments in a game. His visibility in the football industry would allow Quinn to help others facing decisive moments in their lives.

He would soon discover that the U.S. Department of Veterans Affairs was having a difficult time keeping up with the requests of so many men and women in need. Quinn realized there was something he could do.

“We came up with the idea that we could help them with wheelchair ramps,” he says, “remodeling bathrooms and kitchens, things like that that would help them adjust a little easier to this huge transition that they’ve had to deal with.”

The challenge was that he had not done anything like this.

He began by taking an inventory of his assets. He was an NFL quarterback, a former first-round draft pick.

“I realized I had the platform and I had the ability to find these individuals that were in need of help,” Quinn says. “My dad had the expertise as far as doing a lot of the projects for work on the homes. We figured there’s no better place to start than central Ohio. That’s where my dad was based. That’s where I grew up. That’s what we knew. We knew Ohio has always had a strong veteran presence.”

As they started with what they knew, they discovered that creating a structure for acts of kindness could become complicated.

“One of our first projects went to a Vietnam vet,” Quinn says. “We wanted to show him our appreciation for his service to our country. It was the first project we did, the one that made it all worthwhile.

“That’s part of it. These men and women are very prideful. We understand that and appreciate that. It’s not like we always have to tell their story. It hurts us because we don’t get as much exposure. But at the end of the day, that’s not what we’re about. We’re trying to provide help and aid wherever we can.”

Week by week, year by year, veterans were able to cope with the challenges from their wartime experiences or the complications that developed after they came home. A combat veteran suffering from post traumatic stress disorder and traumatic brain injury received materials for repairs after his house had water damage. A middle school received help in its successful effort to send World War II veterans on an honor flight and a trip to Arlington National Cemetery. The wife of a wounded soldier was able to travel to Bethesda, Maryland, where her husband was being treated.

Quinn understood that the home renovations, as much as they helped some veterans, were reaching a small percentage of the ones that needed assistance. The foundation began to expand its efforts with gifts for the holidays and the establishment of a program to educate veterans on personal finance. He learned that the combination of uninformed financial decisions and sudden changes in circumstance was placing veterans in danger of becoming homeless.

“I didn’t want to say no,” Quinn says. “There were other veterans asking for different things. We were looking at ways we could help.

“For us it was about how do we go about stopping the cycle?”

His original question—How do we help?—has led to a level of advocacy that has challenged the limitations of the foundation. Potential donors are encouraged to sponsor a “Touchdown,” a life-altering form of assistance for a veteran in need; to help publicize 3rd and Goal in social media; to visit local veterans; to write letters of appreciation; and to nominate veterans to receive help from the foundation.

The limitations have been a strength, a means of reducing costs and allowing Quinn and his wife, Alicia Sacramone Quinn, to operate their organization by making each decision. Their dedication has created a series of questions that will define their ambition.

How much can be done?

How many can be helped within the existing structure?

“We don’t pay anyone,” Quinn says.

“We don’t have an office. We don’t have any overhead. We love the fact that when people donate, we can say your donation is going directly to the veterans we’re helping.”

There has been help from the generosity and dedication of Notre Dame clubs. There are plans for an inaugural golf tournament to take place next year in the South Bend area.

The commitment to serve is guiding 3rd and Goal back to Brady Quinn’s school.

“It kind of runs deep at Notre Dame,” he says.