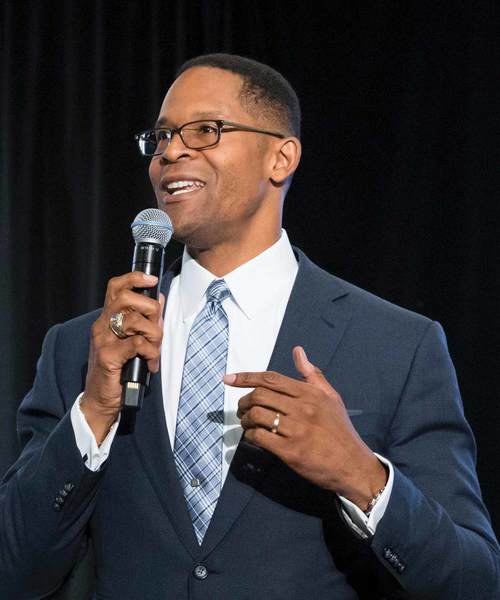 Some profile subjects are reluctant to wax poetic about themselves, while others are reticent by nature. Byron Spruell, though not lacking in humility, is the consummate professional and as such comes prepared with notes. He strides into a midtown Manhattan hotel lounge armed with a list of bullet points for this portrait that he has typed on a sheet of paper.

The former Fighting Irish offensive tackle even suggests a theme for his close-up: “Fortunate injury,” Spruell says, as if he were Don Draper in a “Mad Men” pitch meeting, “fantastic journey.”

From high school valedictorian to Notre Dame football team captain to partner at Deloitte LLP to, ultimately in 2016, the NBA’s president of league operations, Spruell has carved out a unique and highly estimable path.

As far as the injury is concerned, however, the 52 year-old’s insinuation that a bad break put him on a detour to success is dubious. By dint of his intelligence and discipline, Spruell was always destined for greatness no matter what hardship presented itself.

“Byron is a natural-born leader,” says Lou Holtz, Spruell’s Notre Dame coach during his final two seasons (1986-87). “His teammates overwhelmingly voted him captain (along with fellow offensive lineman Chuck Lanza) and if they hadn’t, I would’ve.”

How does a former 280-pound Notre Dame gridder land arguably the second-most prestigious job in the National Basketball Association at the age of 50 without having any previous contact with the league? How did Spruell go from being head of Deloitte’s Chicago office to imposing fines and suspensions among the likes of DeMarcus Cousins and Draymond Green?

“This truly is a dream job,” says Spruell, “but I never dreamed of it because it was never on the radar.”

On any given night between mid-October and early June Spruell is either attending an NBA game and/or staying up watching NBA League Pass until the final buzzer of the final West Coast contest sounds. For every technical foul or every refereeing issue that occurs, he is apprised of the situation and is often in personal contact with the principals. In overseeing everything that takes place from baseline to baseline, Spruell is the liaison and final arbiter between officials, owners, coaches and players. The buck—and the Milwaukee Bucks—stop here.

Where once Spruell was protecting Irish quarterback Steve Beuerlein, now he protects the integrity of every NBA contest.

“Byron learned early on that you cannot please everybody in that role,” says NBA commissioner Adam Silver. “No one is going to call and say, ‘Good job,’ and if they did, that would only mean that there is someone equally unhappy with the decision you’ve rendered.”

The job does have its perks, though. When the Cleveland Cavaliers received their 2016 NBA Championship rings during their 2016-17 home opener, Spruell, born and raised in the area, was at Quicken Loans Arena to distribute them.

“For a kid from Cleveland to not only be standing on the court but representing the NBA after all those fruitless seasons,” says Spruell. “My sister told me, ‘Mom and Dad are smiling down at you tonight.’”

Spruell’s parents, who migrated to Alabama and raised three children in Warrensville, Ohio, are deceased, but they instilled in their son his studious and serious nature.

“We weren’t rich and we weren’t poor,” says Spruell, who played on a youth league basketball team with future NBA seven-footer Brad Sellers (who is now the mayor of Warrensville).

“All my parents asked was that we always do our best.”

“Byron’s the smartest kid I ever coached,” says his coach at Aurora High School, Jeff Black, who recently completed his 49th season in coaching.

“He was an excellent student but he was also homecoming king.”

One of two African-American students in a class of 140, Spruell distinguished himself as the top student, top football and basketball player and most engaging figure.

“Even at the 30-year reunion,” says Black, “Byron is still the magnet. Everyone wants to be around him.”

If for no other reason than to appease Spruell, a warm and engaging husband and father of two (his son, Devyn, is a rising senior linebacker for the Fighting Irish), let’s revisit the injury of which he speaks.

“It was my final high school football game of the season and our starting kicker was out,” Spruell says. “Guess who was the backup kicker?”

As Spruell kicked off, three players from the opposing team targeted him.

“My head was still down when they hit me,” says Spruell. “My knee goes one way, my body goes the other.”

The injury, which included ligament damage, compelled Spruell, who was Aurora’s top scorer in basketball, to miss his senior season in hoops. Until that point, he says, his heart had been set on basketball and perhaps a future on the college hardwood.

Black, who remains a trusted friend to this day, disagrees: “Byron’s mom was never going to let him play college basketball,” he says. “It would have interfered too much with his studies.”

Spruell refuses to speculate as to why the opposing team targeted him, choosing instead to view the unfortunate incident as an opportunity. At Notre Dame he started out on the defensive line behind future pros such as Eric Dorsey, Mike Gann and Mike Golic before accepting a position switch to offensive line when Holtz succeeded Gerry Faust after the 1985 season.

Whereas most Irish fans recall Faust’s final game as the 58-7 debacle at Miami, Spruell has a more vivid memory.

“We flew back into South Bend Sunday night, but there were blizzard conditions,” says Spruell. “After we failed to land, they re-routed us to Chicago.”

The Irish caught a bus back to South Bend, arriving on campus just after 6 a.m. Less than two hours later and following a night without sleep, Spruell was taking notes in an 8 a.m. engineering course.

“That does not surprise me,” says Holtz, when told this tale. “My biggest regret with Byron is that I did not get to know him better when he played for me. The reason is that you only visited my office as a player if you were in trouble.”

Holtz appreciated the leadership Spruell and a few other upperclassmen such as Beuerlein and Lanza displayed, though. When the 1988 Irish won the national championship, Holtz included them among the players receiving rings.

“We could not have turned that program around as quickly if it weren’t for special young men like Byron,” says Holtz.

Spruell spent seven years at Peterson Consulting, a small firm where, as he says, “You ate what you killed,” before joining Deloitte & Touche at age 30. Four years later, he made partner.

Before too long he was named chief of staff for the firm’s CEO in the United States, Barry Salzberg. For fans of Game of Thrones, Spruell was effectively the Hand of the King for the kingdom of Deloitte.

“I handpicked Byron because of his intelligence, his maturity and his trustworthiness,” says Salzberg, who is now a professor at Columbia University’s school of business.

“Every issue that came before me, every client that I needed to see, Byron was there first and he was also my most trusted confidant. He was the complete package.”

In early 2016 Billy Dexter, a longtime friend and former colleague of Spruell’s at Deloitte, met him for dinner. Dexter, now a partner at an executive search firm, told Spruell, “I’m onto a search that you may be interested in, but I can’t tell you what it is.”

Spruell listened, curious, but simply replied, “I trust you.”

A few months later Dexter informed Spruell that it was the NBA position and presented him with the job description and the skills and experience a suitable applicant must have.

“The NBA was looking for someone who had extensive management experience, a familiarity with top-tier athletics, integrity and passion,” says Dexter. “The job was tailor-made for Byron.”

Spruell and his wife, Sedra (the couple, married 27 years, met at a Badin Hall dance; Sedra, also a mechanical engineer, formerly worked at NASA’s mission control in Houston), perused the job description one night at the kitchen table.

“Byron,” Sedra said, looking across the table at her husband, “this is you.”

“Byron was almost too good to be true,” Silver says. “We wanted someone with extensive management experience, but we also were hoping for someone who had athletic experience at a very high level. I never saw Byron play at Notre Dame, but his experience as a top-tier athlete gives him the confidence to deal with our athletes, coaches and referees.”

Spruell, one of two former football players under Holtz who is on Notre Dame’s Board of Trustees (along with Rod West), underwent two stringent rounds of job interviews.

Steve Ballmer, the owner of the Los Angeles Clippers, asked him bluntly, “Why the hell do you want this job?”

Transitioning from supervising 22,000 Midwest-based Deloitte staffers to overseeing 65 NBA referees, 30 owners and a few hundred players is more difficult than you might imagine.

Spruell holds up a black pen.

“In this job, for some people, the pen is just never black,” Spruell says. “Even when it’s black.”

Still, Spruell loves his job. And he is grateful for all of the people who have helped him on his way.

“He still comes back and talks to my football team whenever he’s in town,” says Black, who now coaches at a different high school.

In the autumn of 2017 Spruell returned one afternoon to speak to Black’s players during practice. Afterward, Frank offered to take Spruell to dinner.

“I can’t tonight, Coach,” Spruell begged off. “I have to go to the basketball game.”

It was Spruell’s first official night on the job, the game in which he helped hand out the championship rings to LeBron James and his teammates.

Until Black had inquired about dinner, Spruell never mentioned why he had returned home.