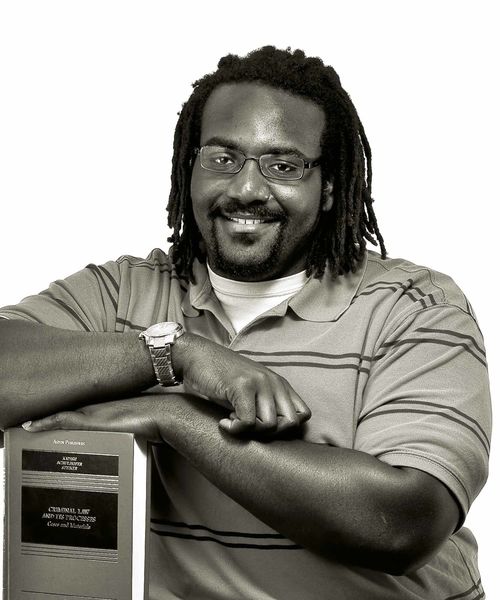 He lays down the law on and off the field

In the early hours of Sept. 27, 2007, the Notre Dame campus was shrouded in darkness, but the lights from Room 229 cast brightness on the inner courtyard of Keenan Hall.

Sophomore Chris Stewart, a prized football recruit, was packing up and going home to Texas.  Frustrated by lack of playing time four games into what was becoming  a miserable season, Stewart had seen enough. His roommate, Mike Rieder, recalls, “He didn’t want anyone to know.  He didn’t want to go through the goodbye process.”

Rieder recalls the tears he had in his own eyes. And Stewart’s too. “He cried like a baby. We had to go tell the rector, Rev. Mark Thesing, C.S.C., who was very consoling. We stayed up till six in the morning.” Then Stewart went home. “For two or three days, he cut everyone off.”

That weekend Notre Dame lost to Purdue, with Stewart watching on television. Then late Sunday night, Rieder’s phone rang. “He said, ‘Hey, what are you doing next Friday? Want to have dinner? I’m coming back.’”

Three years later, Christopher Don Stewart, 23, is literally and figuratively a Big Man on Campus. The only Division 1 football player enrolled in law school, he is—at 6-feet-5, 351 pounds—a formidable performer on the field and outstanding presence in the classroom. He is in his third year of starting every game. Stew, as he’s known to his friends and teammates, completed his undergraduate degree in three and a half years with a cumulative grade-point average of 3.54. He entered the Notre Dame Law School for the 2010 fall semester. In October, the National Football Foundation announced Stewart would receive an $18,000 postgraduate scholarship as one of 16 National Scholar-Athletes.

The Chris Stewart receiving all these accolades embodies what Notre Dame aspires to achieve with all its student-athletes, yet by birthplace and culture, it’s hard to envision a less likely place for him to be.

“I did not grow up dreaming of going to Notre Dame,” he says. He was oriented toward Ole Miss, Texas and Texas A&M. His sister Crystal, 25, says, “Chris is really a Mississippi boy, born in the Delta, stereotypically one of the poorest parts of the United States.” And he is, by his own description, “very Protestant.”

So how did he wind up in South Bend? George Stewart, Chris’ father, recalls hearing from a relative while visiting A&M in 2005 that Mike Haywood, one of head coach Charlie Weis’ assistants at Notre Dame, had an interest in Chris. A short time later, they were contacted directly. According to Chris, “It was sort of weird. You know sometimes you feel you’re supposed to do something? The most interesting thing is that when I set foot on campus for the Notre Dame-Michigan State game in 2005, I felt I was supposed to go here. And that was it.”

But that did not make the transition easy when he arrived in January 2006, having graduated early from Klein High School in Klein, Texas. George Stewart remembers those first phone calls. “He said, ‘Dad, as much as I love Notre Dame…goodness, if I had known it was this cold, I don’t know if I would have made that choice.’”

The football wasn’t coming so easily either. Weis famously referred to Chris as “two cheeseburgers short of 400 pounds” and set out to get his star prospect slimmed down a bit.  (Chris is very comfortable with his enormous size; he just doesn’t want to look “sloppy.” So he pledges to eat smartly and work out the rest of his life.) By September 2007, Chris felt he had not been properly evaluated. During this period he credits his roommate Rieder and a former girlfriend with “keeping me sane.” Rieder recalls, “He was definitely struggling. There was no easy way. He fought it. He was coming from a totally different culture, and he had left high school early.” In that early season of 2007, Rieder had known for weeks that Chris was thinking of bolting, but “I couldn’t tell anyone.”

Chris’ mom and dad had divorced years before, and he was raised in Greenwood, Miss., for most of his earlier years by his mom, Lucia Harris-Stewart, now a retired school teacher and a star basketball player in her collegiate days. His dad has a car dealership in Texas, where Chris went to high school. He was always competitive in his studies, particularly with two of his six siblings—his sisters, Crystal and Christina—who are twins. “Our parents didn’t have to push us to do anything. We were all high performers in school. But when it came to his frustrations at Notre Dame in 2007, it was all about the football. “He was very unhappy because he wasn’t getting a chance to play. I told him to take a break and really decide,” his mom says.

This is where Charlie Weis goes from foe to friend in the Stewart saga. Chris had already filed his paperwork to officially leave Notre Dame, but Weis put the process on hold for the weekend, while Chris flew home. According to both Chris and George Stewart, Weis reached out to his player and told him, in George’s words, “This is the kind of person that we want on our campus.” He adds, “To me, Charlie, and what happened to Chris, brought out the best in Chris. It toughened him up.” The son adds, “He told me I was a Notre Dame kind of person and he would hate for me to leave. I saw a side of him I hadn’t seen before.”

So he returned the following Monday and was back at practice the next day. Later that year he registered 47 minutes of playing time. He started 10 games in 2008, and 12 games the following year and was clearly a team leader in the 2010 season. But there is obviously much more to the Stewart story at Notre Dame. Though he’s been buried in law books from dawn till midnight most days of his final season, he was a familiar presence on campus the previous four years. “Chris should have run for mayor of Notre Dame, if he could have.” says Rieder. “He made friends with guys who didn’t care that he was a football player.”

He also picked up on Notre Dame’s tradition of service. He visited Haiti during spring break of 2009 with the legendary retired professor and dean, Emil T. Hofman, who organizes platoons of Notre Dame alums, particularly physicians, to aid the Notre Dame program in that struggling nation. Though raised in conditions that were far from comfortable, Chris said nothing prepared him for Haiti. “Seeing an entire country below the poverty line…,” he recalls, his voice trailing off. Many of the children he met there, and who marveled at his size, were later killed in the earthquake of January 2010. “It was heartbreaking,” he says. “I think service will always be a part of my life after experiencing that.” Crystal Stewart predicted that 20 years from now her brother will be working in some underdeveloped country.

Stewart talks often of being the “old man” of the team at age 23. Rieder, now an investment banker in New York City, graduated two years ago, and nearly all the teammates he began with have moved on. He credits Ryan Harris, now an offensive tackle with the Denver Broncos, with being his mentor in the early years. Though he doesn’t keep in touch regularly with Weis, now offensive coordinator of the Kansas City Chiefs in the National Football League, he hopes “he’s going to need some linemen” next year, as Chris hopes for a career in the NFL.

His plan was to finish the fall semester at the Notre Dame Law School, then pick up his legal career after the NFL. “I guess a whole bunch of people don’t realize that football is my thing. Everything else (like law school) is kind of extra. I just happen to be good at it.” Sitting in the Commons Room of the Notre Dame Law School late one night, he laughs. “That sounds kind of funny right now, sitting here doing my homework.”

Mike Golic Jr., one of his understudies on the offensive line, says the one word to describe Stewart is “passionate.” He says this includes law school as well as “everything that goes with football.” Like Rieder, who describes Stewart as the brother he never had, Golic says, “I feel myself fortunate that he’s a person I’ve gotten close to.” It is common on campus to hear someone brag about his or her relationship “with Stew.”

Friends and family also mention Stewart’s spiritual side, as does he. He may be a Southern Baptist, but the Grotto is his favorite place on campus. He jokes about having “dated mostly Catholic girls.” (He is in a serious relationship with Brittany Payne, a Saint Mary’s College junior from Plymouth, Ind.)