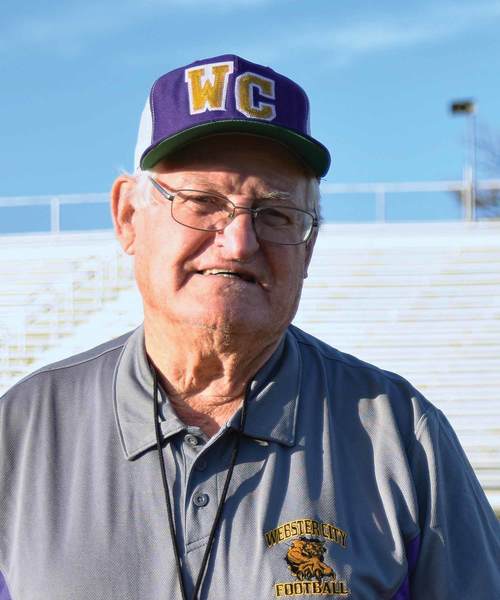 Nobody from Notre Dame Won More

Dick Tighe appreciates simplicity—this is a man who authored a book titled “The No Frills Belly I Power Offense”—so let us get right to the point: he is the winningest football coach in Notre Dame history.

That is to say, no alumnus of Notre Dame has won more football games than Tighe. Nobody. In 63 uninterrupted seasons of coaching high school football, all but seven of them in Iowa, Tighe has won 432 games. That total may climb. The class of 1952 graduate retired recently at the age of 86, but he has retired twice before and allows, “I’d listen to offers if someone wants me to coach again.”

Knute Rockne (class of 1914) had a decent run, winning 105 games, all beneath the shadow of the Golden Dome, in 13 years. Frank Leahy, who played for Rockne and graduated in 1931, won 107 games in 13 seasons: two at Boston College and 11 at the helm of the Fighting Irish. If you were to add Rockne’s and Leahy’s totals—26 seasons, 212 wins—and then double them, the numbers would still be shy of Tighe’s 63 seasons and 432 victories.

Richard Rohan Tighe began coaching high school football in 1954 and stopped, at least for now, in 2016. His career spanned 11 United States presidencies, seven decades, five institutions and two countries (his first stop being in Hamilton, Ontario). He produced winning squads in 58 of his 63 seasons and a career mark of 432-168-8.

Tighe has won games by all manners of scores (a 62-0 defeat of Boone High School in 1983) and lost them by such (a 1-0 loss to Delta High in Ontaria via rouge, a Canadian football analogue to a safety). He has sweated in stifling September heat and shivered in November blizzards. He has coached indoors. He missed one game in 63 seasons, in 2012, and with good reason: that morning his wife of 59 years, Margot, passed away.

“The word I’d use to describe my dad is ‘consistency,’” says the younger of his two sons, Jim Tighe, who is in his 20th year as a high school head coach in Iowa. Consistency, yes. Sixty-three years of coaching. Fifty-nine years of marriage (he remarried in 2014 at the age of 84). Tighe spent 45 consecutive summers teaching driver’s education, which may have been more harrowing than either coaching or marriage.

“Growing up, we learned to avoid my dad during the six weeks in the summer that he taught driver’s ed,” Jim Tighe says.

“I did that to pay for my kids’ college,” says Tighe, who raised four daughters and two sons (his older son, Richard, played quarterback for him and earned a PhD in nuclear physics from Notre Dame in 1992).

“Never had an accident until my last year, when my student braked to avoid hitting an animal and we were rear-ended.”

Tighe (pronounced “tie”) is an ardent disciple of Leahy and Ohio State legend Woody Hayes. When he was a lad growing up on his family’s farm in Homer, Nebraska, during World War II, he witnessed a B-26 bomber crash during a training mission. He was suspicious of aerial attacks ever since.

“In a typical season,” says Jim, who played center for his father in the mid-1980s, “my dad would throw once or twice a game.”

At coaching clinics Tighe opens his addresses by stating, “If you’ve come here to learn a great passing offense, you need to go see a different speaker.”

The seventh of nine children raised in an Irish-Catholic family, Tighe identified his vocation at an early age.

Instead of working the land, Tighe became the first member of his family to attend college. He spent three semesters at nearby Wayne State in Nebraska, where he was a junior varsity quarterback, before transferring to Notre Dame.

“It wasn’t as academically rigorous then as it is now,” says Tighe, who has two granddaughters (of his 36 grandchildren) currently at Notre Dame.

“I used to have a professor named Plunkett whose catchphrase was ‘Flunk it with Plunkett.’”

He did not play football at Notre Dame. Tighe enrolled in January of 1950 and encamped in 314 Walsh Hall. Down the corridor in room 325 lived Leon Hart, who had just won the Heisman Trophy. Tighe would often head over to Cartier Field to, when Leahy allowed spectators, observe practice.

“I knew all his plays,” says Tighe. “I was more interested in how he conducted practices and taught the fundamentals. What struck me is how many times, with some of the best football players in the country, Leahy would repeat basic techniques such as the shoulder block. He was a stickler for details.”

Following graduation and a stateside stint in the Army during the Korean War, Tighe wrote Leahy to inquire about coaching jobs. Leahy had retired by then and the letter was forwarded to athletic director Moose Krause, who helped the 23 year-old Tighe land a head coaching job at Cathedral Boys High School in Hamilton, Ontario. There was a learning curve to adjusting to Canadian football rules.

“I installed my offense,” Tighe recalls “and one of my assistants said, ‘Hey, coach, we get to use 12 players. What are you going to do with the extra one?’”

Tighe won the first of the 608 games he would coach, 20-0 over Saint Jerome’s High School of Kitchener. His inaugural team finished 7-1-1 but success did not absolve him from critiques, a lesson he would learn time and again over the course of six-plus decades.

“During games the Bishop (of Hamilton) loved to send me notes on what to do,” Tighe wrote in his recently published autobiography, “Dick Tighe: 63 Years of High School Football.”

“One of his favorite suggestions was to kick off instead of receiving because the wind was 40 miles an hour from the north.”

In 1960 Tighe and his young family relocated to Iowa. He spent one season at St. Edmond High School in Fort Dodge, then five years at Kuemper, also a Catholic high school, in Carroll. At Kuemper Tighe also taught seven sections of history daily. In 1967, in search of a better salary and a more secure health plan for his growing brood, Tighe moved to Webster City, where he would coach for the next 31 seasons.

“The routine was always the same,” says Jim. “Friday nights after the game dad and his assistants would listen to the scores of the other games on the radio and go over stats. On Sunday after church—we never missed church—we’d go over to the bus station so that dad could pick up the game film for the upcoming opponent. That’s how coaches sent film to one another back then.”

When videotape overtook film, Dick Tighe would haul home a VCR player from school and then return it before classes Monday.

“My dad grew up during the Depression,” explains Jim. “He’s tighter than the bark on a tree. There was no way he was ever going to pay for a VCR.”

There were numerous outstanding seasons. There was never a state championship. In 1970 the Lynx finished 9-0, but that was in the days before playoffs. Between 1981 and 1986 Tighe produced five one-loss teams; the sixth suffered two defeats. Four of those squads were bounced from the playoffs by the same school, Harlan High School.

The most heartbreaking loss took place during a blizzard in 1985. Harlan led 3-0 late when, on fourth and goal on a snow-blanketed field, Tighe claims his quarterback dove over the goal line untouched. The zebras were undecided; Harlan’s coach and players stormed the field as if they had won. Perhaps too many people were too chilled to the bone to argue. The score stood.

Did Tighe ever talk about his undergrad days?

“Only all the time,” says Jim who notes that under his father the Lynx switched to gold helmets.

“We heard all the stories about Leahy.”

In 1997, after a 3-6 season, Webster City chose not to renew the contract of the 67 year-old Tighe. He admits that after 31 seasons perhaps everyone was a little too familiar with one another and the ultra-conservative coach had tired of the familiar cat-calls: “Run the other play, Tighe!” and “The forward pass is legal now!”

After a four-year stint in Iowa Falls, Tighe returned to St. Edmond, where he had coached in 1960. The Gaels had lost 43 of 45 games before Tighe, then 71, took over. Within four years he led them to an 11-victory season. In 2013 and 2014 St. Edmond went a combined 25-2 with an octogenarian coach. In the former season Tighe, propping himself up on the sidelines with a cane, led the Gaels to his only state championship game appearance, a loss to Iowa City Regina. Currently among high school coaches he is tied for eighth nationally for career victories and tied for first with John McKissick of Summerville, South Carolina, for most seasons.

In September 2017, for the first time since Dwight Eisenhower was in his first term, Tighe found himself with no plans on a high school football weekend. What did he do?

“I drove over to Dodge City to watch a game and I sat in the crowd,” says Tighe. “God, there’s a lot of stupid people up there.”