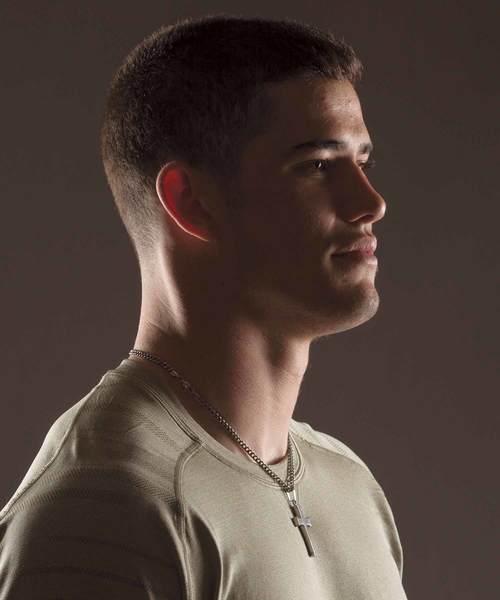 “You’ve got to give something back. You can’t just sit there.”

He’s spent time with the homeless.

But, while Tranquill doesn’t quite have the resources the Prince of Wales has at his disposal, Tranquill is doing what he can to make good on a promise he made a long time ago to God and himself.

“I was about 10 or 12 years old and I was sitting on the floor in my room praying, and I just made this commitment with the Lord that if He gave me a platform to play big-time ball somewhere that I would give back and use that for His glory,” Tranquill says.

“I realize I am serving the community, but I wanted to take my involvement to another level. And I had the opportunity here where you have thousands and thousands of people on any given Saturday at Notre Dame, and I can bring them and the South Bend community together.”

That opportunity is called the 5th Quarter, a fundraiser for a club called Lifeworks Dream Team of which Tranquill is a part. That group aims to send college students and college student-athletes into primary education centers around the South Bend area to mentor underprivileged children who aren’t receiving support at home and who are struggling in the classroom.

For Tranquill, that was never a problem with which he dealt. He grew up in a Christian home in nearby Fort Wayne, Indiana, under the guidance of parents Shannon and Tony as part of a close-knit clan which also included four younger siblings (Justin plays football at Western Michigan; high school senior Sarakate; high school sophomore Jack and fourth-grader Ethan), Tranquill’s maternal grandfather who has lived with the family for about 12 years (“We call him Big Daddy”) and two dogs.

“I joke that Drue was more difficult as a little guy than my other four kids combined,” Shannon Tranquill says. “He was very observant. He was always very busy. He always noticed details that other kids didn’t. He was always very, very determined. But that determination became very helpful.”

As a young kid, Tranquill loved baseball and Auburn, his parents’ alma mater. Over time, though, Tranquill decided to walk away from baseball because of a back problem and, instead, turned to the other sport he loved—football. He ended up at an Irish Invasion camp for recruits when he was a junior in high school and came to realize what a special place the South Bend campus was.

Because he came so late to the football recruiting scene, Tranquill didn’t receive any Southeastern Conference offers or one from the Irish. So when things fell into place early during his final prep season, Tranquill verbally committed to in-state Purdue. About a week later a phone call changed everything.

“(Notre Dame linebackers) coach (Mike) Elston called me and said, ‘What are you doing, man? We were going to offer you,’” Tranquill says. “I guess Notre Dame had been in a dead period (for recruiting) which is why I hadn’t heard from them, and I hadn’t been aware of that. So (Elston) told me that if I wanted to open my recruitment up they would extend me an offer per (Irish head coach Brian) Kelly. I told him I would definitely reconsider and open things back up. It took about four months just to visit and pray and talk to my family, and I decided that Notre Dame was the place for me. It was the toughest decision I have made thus far in my life, but it was an opportunity to grow academically, on the football field and in my faith.”

Tranquill found a spot for himself on the team, playing in the first 11 games of the 2014 season, including three starts, before tearing the ACL in his left knee in the Louisville game. It’s not the most uncommon of injuries (the Center for Disease Control estimates that approximately 250,000 people suffer an ACL tear every year), albeit for athletes it’s a season-ending one. It’s a grueling rehab of six to eight months, but it was one that Tranquill dug into from the outset.

“I wouldn’t say the rehab was the toughest part because I’m someone if you give me a task or a goal to work toward I’m pretty resilient in pursuing that,” says Tranquill, who was named Notre Dame’s defensive newcomer of the year that season. “I think it was more or less the time that it takes to rehab an ACL—the time that I wasn’t able to be on the field with my teammates and play the game I love. That was probably the most difficult thing.”

But Tranquill became more of a statistical oddity when, less than a year later, he incurred another ACL injury. This time it was in his right knee, and it was while he was doing something he’d done hundreds of times before. After breaking up a pass late in the second quarter in Notre Dame’s 30-22 victory over Georgia Tech in September 2015, Tranquill leaped into the air for a chest bump with middle linebacker Joe Schmidt. Once he landed, Tranquill knew immediately that he had a serious problem when he felt his knee give way underneath him.

The physical pain was excruciating, but it was mentally tougher knowing what he would be facing in the months ahead—and that he would never play with some of his teammates again. But the rehab itself wasn’t any worse or better the second time around, just different.

“The first time around I just had a ton of excitement about attacking my rehab and wanting to get everything done quickly,” Tranquill says. “It was just constantly, constantly pushing the window. The second time, though, I understood the process, that it does take time to come back. I realized it was going to be another six or eight months of grueling rehab and constant time in the training room. But this time around we had guys like (cornerback) Shaun Crawford (who tore his ACL about a month before Tranquill did) who was there, and I was able to be around those guys and encourage them and help them. So it was just a totally different experience this time.”

“I was very surprised at how he has been able to endure these challenges and setbacks,” says Tranquill’s dad, Tony. “But, on the other side, I’m not surprised by his determination.”

Now healthy, the 6-foot-2, 225-pound Tranquill has earned a starting spot on the Irish defense and is looking forward to a full season of contributions and making the 5th Quarter a success. And both football—or lack thereof because of his injuries—and his charity work have gone somewhat hand in hand to give Tranquill a better understanding of what he is trying to achieve with the platform with which he has been given.

“The name actually comes from when I was in the seventh grade and we had a thing called the 5th quarter where anyone who wasn’t playing in the game played in the 5th quarter,” says Tranquill,

a 2016 first-team Academic All-American. “I think (being injured) these past two years has shown me there’s more to life than football, and we all have to play in life. We never know when something unfortunate is going to happen to us. So that’s essentially where the initial thought came from.”

“Doesn’t surprise me at all that he’s doing it,” Shannon says. “He just has this huge heart for little kids, and it just breaks his heart if he knows they don’t have parents or they’re living in difficult circumstances or whatever. He used to be very black and white about things and very mathematical. But now he has this desire to encourage people and not in a judgmental way at all. He’s evolved into this beautiful person, and I remember thinking to myself, ‘I admire my own child.’”

The first fundraising event, held after the 2016 Nevada home game, proved a hit. In addition to his own family, Tranquill has reached out to his teammates and their families to participate as well. He also has had the chance to see first-hand how his work and his words are affecting others.

“The first one was a great success,” Tranquill says. “We had over 100 people show up, and it was an incredible atmosphere. We wanted to have (a few) players there, signing autographs, taking pictures and maybe sharing a little bit of their story as well, just a kind of graduation/post-tailgate kind of party that’s fun and interactive.

“After I finished speaking I was taking pictures with (Irish quarterback) Brandon Wimbush and this man came up to me. He was an enormous Notre Dame fan and he had been battling cancer. He loved what I had to say about dreaming and that he keeps dreaming and fighting every day to beat cancer. So that was really kind of inspiring to me to learn that I was having an impact on this man’s life.”

A second event was scheduled for after the last 2016 home game versus Virginia Tech, and Tranquill planned to use the first experience to hone things such as marketing to reach an even bigger target audience. In the meantime, though, money raised already has allowed the group to start developing teams of college students and student-athletes and get them into local schools to adopt classrooms. The teams consist of four to six people organized by a team captain, and they will spend one hour a week working with the kids and assisting the teacher in any way they can.

Tranquill’s dad, on hand for the first event (Tranquill’s mom was at a football game for brother Justin), admitted he had a lot of emotions watching his son speak and mingle with the crowd. But he noted it’s been a culmination of maturity and growth that has brought his son this far, something that began in earnest in high school and continues to evolve.

“One thing that stands out as a parent is that I was humbled by the faith and leadership Drue has at this age,” the elder Tranquill says. “He was confident enough to step out there, share his passion for what he’s doing and for the love he has for these kids and the community.

“Part of that came through his training facility here in Fort Wayne called AWP—Athletes With Purpose. I think an instrumental part of his mentality was the leader of that group, Mike Ledo, who focused on character development and spiritual development as well as athletic development. So that was definitely a turning point in (Drue’s) life in terms of giving back in a very public way.”

Despite a tough start to the 2016 season and some upheaval on the defensive side of the ball, Tranquill is battling through with his seemingly endless supply of determination, conscious of how he arrived on campus and the opportunities he has been given.

“I look back on my childhood and consider myself so fortunate,” Tranquill says. “And then I look at some of these kids who come from broken homes and bad situations and I have a deep sympathy for them because they didn’t have the opportunities that I had. If I didn’t have people believing in me growing up I wouldn’t be at Notre Dame right now.

“All the problems going on in our country start with the youth, and I can’t stand the thought that one of these kids (that we work with) could end up being shot or living on the street or in prison. So if I can do something with my platform here at Notre Dame, I definitely want to.”