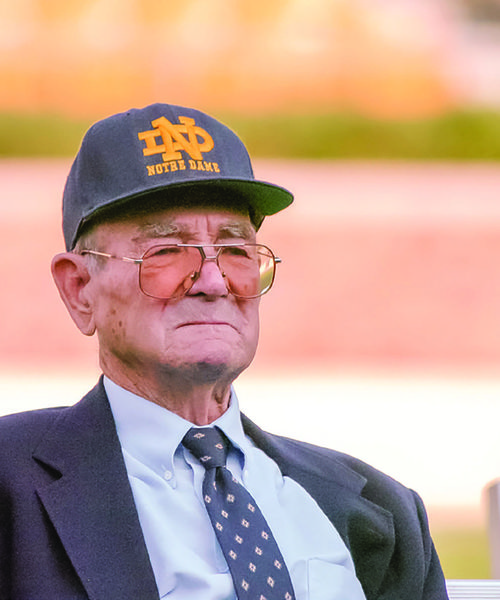 I drove to sacred ground on a whim.

It was 17 years ago, about the time of the 70th anniversary of Knute Rockne’s death. That spot — that sacred ground where he died — is 90 minutes from my suburban Kansas City home.

So with little more than hope I drove out that spring day in 2001 to Cottonwood Falls, Kansas. Before GPS or Siri, I got directions from there the old-fashioned way. I got out of my car and asked around.

Where was the Knute Rockne Memorial?

Seven decades earlier the plane, in which the legendary Notre Dame football coach was flying, crashed into a pasture in rural Chase County, Kansas.

Rockne perished along with seven others. I had to see what has now become a cherished Notre Dame landmark.

The memorial erected five years after Rockne’s death in 1931 is a 10-foot granite obelisk containing the names of the eight who perished that day.

It is surrounded by a crude barbed-wire fence to keep horses and cattle away.

Visitors, though, just keep on coming. It wasn’t out of morbid curiosity that I came, although almost 90 years later there is still glass from the plane embedded in the ground where it went down.

It was out of reverence. For anyone who loves college football history, this was a must. Sad and tragic, yes, but since the crash, circumstances have carved out a piece of Notre Dame history for themselves.

A few miles out of town that day, I knocked on the front door of a lonely country home, cold-calling a then- 84-year-old gentleman named Easter Heathman.

I stumbled upon the only remaining living person who had witnessed the crash. As a 13-year-old in 1931, Heathman was summoned to the pasture by the sound of a sputtering engine on a raw cold day in Kansas’ Flint Hills.

That day, Heathman told me how he had made it his life’s work to become caretaker to Rockne’s legacy. For years, he had been a modest farmer. But every so often passers-by would ask about the Rockne memorial that was erected in 1935.

Until his passing in 2008, Heathman became that unofficial caretaker. Unofficial because as far as anyone knows Heathman never took a dime for leading folks through two cattle gates, a babbling creek and through the treeless Flint Hills to the memorial.

“It’s given him a reason to be,” David Kil said at the time. Kil, Notre Dame’s assistant registrar for 38 years, passed in 2017.

“People start stopping by and he takes them up there,” Kil added. “If they offer him money, he won’t take it. If they insist, he’ll use it to put a new wreath out.”

Easter left us a decade ago, but not without making a recording of his recollections and donating it to the National Air and Space Museum. A guest book that each visitor the memorial was compelled to sign still exists.

At last count, visitors from 50 states and two foreign countries had been to the tiny swath of history. It is estimated Heathman has led more than 1,000 visitors to the memorial.

There is anguish in everything that happened that fateful day. Rockne actually missed seeing his sons — Knute Jr., 14, and Billy, 11, by 20 minutes, while in Kansas City. The boys were traveling back from vacation with their mother.

“In my opinion Knute Rockne was what you would call a straight, honest man and he liked to win football games,” Heathman told me.

That begins to explain why a retired farmer and Army veteran found new meaning late in life.

“He enjoyed people so much,” says Sue Ann Brown, Easter’s daughter. “Everybody who went up there, it meant something to them.”

The world hasn’t changed much around Cottonwood Falls, Bazaar and Chase County. Brown has taken up her father’s duties leading tourists up to the memorial. She also drops in to the Chase Country Historical Museum and Library and answers any questions about the Knute Rockne Crash Exhibit within it.

“The thing that I will never forget was when I took somebody there myself,” Brown said.

“They got out of the car and kneeled down and prayed. That just gave me goose bumps. It was the Catholic thing. That just spoke volumes to me.”

Growing up, Brown remembered details of the crash from her father.

The day of his death, Rockne had spent time in Kansas City on his way to Los Angeles to work on a film. One hundred forty miles southwest of Kansas City, a wing broke off the Fokker F-10 due to icing conditions.

The doomed aircraft came out of the sky and was spotted by a few horrified onlookers.

“My Uncle Clarence seen it come out of the clouds,” Heathman told me. “He said the wing was broke off. The plane was turning end over end. You can picture in your own mind what that ride was like.”

Heathman remembered seeing a body near the crash with wraps on the legs. Later, he realized he had probably seen Rockne, who had phlebitis. His brother took home the plane’s propeller as a souvenir until the local sheriff demanded it be returned as part of the investigation.

It wasn’t until decades later, Brown said, that her father felt an obligation.

“After 1931, he didn’t go back up there until he retired,” Brown said. “As long as the Baker family owned those pastures, anybody could open those gates if they could find their way. There was public access.”

“He was worried about them, that they didn’t know what the left fork in the road was. He decided it was best he just took people up there.”

A Texas rancher named Leonard Cornelius owned the land for decades. He locked the gate leading to the memorial but gave Heathman the combination so he could lead his tours.

“I used to ride my horse up there when I was kid,” Brown said. “It was just a beautiful view. Dad used to always say, ‘A famous football coach died in a plane crash up there.’

“That’s all I knew about how dad got so famous.”

Over the years, Heathman has become a minor celebrity in the Notre Dame community. When I visited, Heathman pulled out a box showing me an autographed game ball from former Irish head coach Lou Holtz.

Heathman owned what are believed to be the only existing photos of the intact plane before the crash. Heathman had business cards printed that bear his name, phone number and address with the phrase, “A witness of the Knute Rockne crash.”

He had stared into the eyes of relatives of the dead who had come across the country to view the barren prairie where the loved ones died.

“I think God blessed you with this incredible memory,” Heathman said, recounting a conversation with the wife of one of Rockne’s grandsons, “so you could tell this story.”

Heathman became a story unto himself. Notre Dame welcomed him and his family to campus many times. A plaque outside Notre Dame Stadium reads: “Easter Heathman, in grateful appreciation for 75 years of dedicated work in keeping alive the legacy of Knute Rockne.”

That same year, Heathman was awarded an honorary monogram by the Notre Dame Monogram Club.

Brown and a small group of individuals gather every five years to honor Rockne. The 90th anniversary is in 2021.

“I just had the time and went along with dad with whoever he was taking and listened to his story,” Brown said. “Dad always weeded up there and kept it neat and looking nice.

“He said that was sacred ground. People lost their lives up there and it should never be forgotten.”

So far, it hasn’t. Five miles from the memorial, at a Kansas I-35 rest stop, a bust of Rockne is scheduled to be dedicated in the spring of 2019.

The bust was done by Jerry McKenna, considered the unofficial sculptor of Notre Dame. McKenna’s sculptures of Rockne, Holtz, Frank Leahy, Ara Parseghian and Dan Devine adorn the outside of Notre Dame Stadium.

His dramatic Four Horsemen sculpture sits in the lobby of the Guglielmino Athletics Complex.

That Rockne bust might be the most access to the crash narrative a lot of folks get. The tract the memorial sits on was sold at auction for $4 million in 2018.

As of fall 2018, the new owners had kept locked the gate that Heathman passed freely through for decades.

On one memorable day, though, I was able to pass through those gates. Six horses came over the horizon, sticking their heads into my SUV looking for food.

This truly was the middle of nowhere.

But it was central to Notre Dame lore.

“It means everything,” said Bernie Kish, noted Rockne historian. “Coach Rockne will forever be the Notre Dame coach for people from far and wide.”