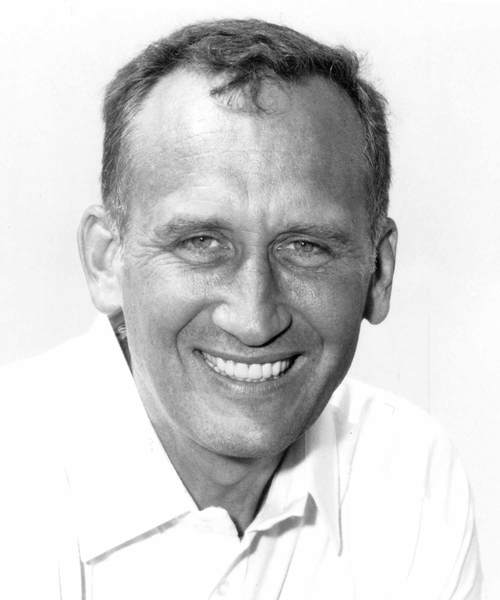 The door opens onto the third-level landing of Notre Dame Stadium. A surge of media and others stream into the spacious press box area.

Among them is an 80-year-old man, retired but in no way retiring: Gerry Faust, the former Fighting Irish football coach.

Faust does not step out of the elevator as much as he explodes, effervescent and giddy, like champagne whose cork has just been popped.

“Hey, Crabes!” Faust beckons as he spots the friendly face of Bob Crable, the former All-America linebacker who played for him both at Cincinnati’s Archbishop Moeller High School and at the University of Notre Dame.

“Crabes, how you doin’? They’ll let anyone up here!”

The friendly faces multiply and soon envelop Faust, his blue eyes beaming. It is the 2015 Irish season opener versus Texas, and Faust is at home in the midst of his former players. Tom Thayer, who played three seasons for him on the offensive line before winning a Super Bowl ring with the Chicago Bears, joins the huddle. So does Tim Brown, who was part of Faust’s 1984 and 1985 teams before winning the Heisman Trophy two years later in 1987.

“It’s a family,” says Crable, who has known Faust since he was a sixth-grader. “One thing Fuzzy (Faust’s nickname) does is he makes you feel like you’re part of that family.”

The light dances in Faust’s eyes. His right arm is forever extended, shaking any hand that reaches toward him.

How long has it been since Faust last set foot on campus, last visited the Grotto? His final game as the football coach at Notre Dame, after all, his dream job that ended in failure and a 58-7 shellacking at Miami, was 30 years ago. How many years has it been?

“I come back to four games every year,” Faust, who lives in Akron, Ohio, says matter-of-factly. “I started coming back in 1995 after I retired as the coach at Akron.”

If you discount the sculptures of Lou Holtz and Ara Parseghian that stand just outside the gates of the stadium, no living former Notre Dame football coach is more of a constant presence on game days than Faust. In fact Parseghian, 92, who resides in South Bend and shares a birthday (May 21) with Faust, rarely attends an Irish home game in person.

Faust, of course, did not win two national championships. He resigned one game before the end of his fifth season, in 1985, with a 30-26-1 record coaching the gold helmets. Of the seven surviving Fighting Irish coaches, none owns a more dismal win-loss record. And yet the other six combined do not visit South Bend as often in any one autumn as he does. The eternally faithful Faust would never allow his win-loss record at the school to dampen his devotion to the University of Our Lady.

Though he is a husband, a father and a grandfather, Gerard Faust Jr., is also a perpetual pigskin pilgrim. Besides Notre Dame contests, he attends four games at Moeller, where he coached for 19 seasons and won five state championships, each autumn. He will go to a few games at Akron, where he lives and where he coached for nine years immediately after his Notre Dame tenure ended—barring a scheduling conflict.

“Am I going to see you at the game this weekend?” Akron athletic director Larry  Williams will ask Faust during one of his weekly drop-in visits to the Zips’ athletic offices.

“We have a game here, too,” Williams replied with a knowing smile.

Long before Larry Williams was the athletic director at Akron, he was a hulking 6-5, 290-pound All-America offensive lineman at Notre Dame. Williams, who graduated in 1985 and went on to play nine seasons in the National Football League, was a member of Faust’s first recruiting class in 1981. The Orange, California, native soon would learn that Gerry Faust never really stops recruiting people.

“Coach comes up to me after practice one day early in my freshman year,” Williams recalls. ‘Larry,’ he says, ‘I want you to do me a favor.’”

Williams was not even a month into his freshman year.

“Sure, anything, Coach,” he replied.

Faust first stepped on the Notre Dame campus on Thanksgiving weekend in 1952. The Fighting Irish were playing host to USC and he was one of dozens of high school seniors who had been invited to attend the game and also to work out for the Notre Dame coaching staff beforehand.

“I was a high school quarterback,” says Faust, who played for his father in Dayton, Ohio. “There must have been 16 quarterbacks lined up in the old Fieldhouse and they had us throw. I was eighth in line. By the time they got to me I already knew that I couldn’t play for Notre Dame. ‘There goes my dream,’ I said to myself.”

It was on that first visit that Faust discovered the Grotto, the on-campus facsimile of the shrine in France where the Virgin Mary appeared to St. Bernadette in 1858. When, decades later, Faust was being considered to replace Dan Devine as Notre Dame football coach, he returned to the Grotto with his wife, Marlene, and lit eight candles.

“Seven were for family members,” says Faust. “The eighth was for me to become head coach at Notre Dame. And I pledged that if I got the job, I’d visit the Grotto every day for as long as I remained the head coach.”

And so it was early on a September morning in 1981 when Laura Lee, a freshman tennis player who lived in Lewis Hall, began descending the steps that run down behind the Basilica and into the Grotto. She spotted a solitary soul, a man, who seemed to be in the midst of a devout prayer.

“Actually, it moved me, how intense he seemed to be,” recalls Lee. “I just sat down on the steps and waited for him to finish.”

When Faust finished praying, he began ascending the steps and noticed Lee, who had no idea who the first-year coach was. In fact, she had never attended a football game before in her life.

“Where are you from?” Faust asked, failing to introduce himself.

“I have a player from California,” Faust said. “I’m going to have him call you.”

That night Larry Williams of Orange County and Morrissey Hall phoned Laura Lee of Agoura, and by way of an opening line said, “My coach told me to call you.”

“I thought she was going to be a charity case,” Williams says now after five children and 32 years of marriage to Lee. “When Laura and her friends stopped by at Morrissey that weekend for a party my first thought was, ‘Coach, you didn’t tell me that this was a very attractive girl.’”

When Crable, who was a senior and a team captain on that 1981 team, is reminded of how Williams and his wife met, he laughs.

“Fuzzy was fixing people up back when I played for him at Moeller,” says Crable, who would later go on to serve as head coach at Moeller himself following an NFL career. “His wife was the cheerleader coordinator, so they’d work together on pairing up couples. I don’t recall anyone ever going on a second date.”

Faust does not consider himself a matchmaker.

“When I met Laura, I just saw a freshman who was homesick,” he says. “Their getting together? That wasn’t me, that was the Blessed Mother.”

In the eight years before Notre Dame hired Faust, the Fighting Irish had won a pair of national titles (1973 and 1977) while Faust had led Moeller to five undefeated, state high school championship seasons. Theirs seemed the perfect coupling, particularly when you tossed in Faust’s unbridled optimism for the school.

“After we won Gerry’s first game, against LSU, we were the No. 1 team in the country,” recalls Williams. “I remember Coach getting up at the pep rally before we headed to Michigan leading a ‘We’re No. 1’ cheer. And I thought, ‘Can you do that?’”

For that LSU opener the Irish planned to dress out 120 players (a different era, to be sure), but instead dressed out a 121st, an injured freshman who wanted to run through the tunnel with his teammates. Contrast that to the travails that the titular character in “Rudy” endured with Faust’s predecessor, Dan Devine, in order to earn the same privilege.

“After the game he came to me and said, ‘You don’t know what a thrill that was for me, Coach,’” Faust told The Observer (the Notre Dame student newspaper) at the time. “And I said, ‘Yes, I do. I just experienced it myself.’”

Faust’s utter guilelessness is what endeared him to so many—and continues to do so today—but it also was a mode that not every Notre Dame player aged 18 to 23 may have been accustomed to.

“I think 90 percent of the guys bought into Fuzzy’s enthusiasm,” says Crable.

“I know for me, I always remembered that my job was to play football and get a degree from the University of Notre Dame.”

“We had a big game at Colorado my junior year (1983),” recalls Williams. “And we were used to Coach using words like ‘shenanigans’ when he was upset. We’re in the locker room before kickoff and he’s giving his inspirational speech. Spittle is flying everywhere. And he says, ‘I want you guys to go out there and…I want you to kick their ass!’

“That couldn’t have been easy for him,” says Williams.

The Irish won that day 27-3 (in the first start for a freshman quarterback named Steve Beuerlein).

While Faust never led the Fighting Irish to better than a 7-5 season, he won so many more hearts.

Former Sports Illustrated photographer Heinz Kluetmeier, a legend in his own realm, said Faust is the only coach he ever hugged after a game. (Kluetmeier snapped the image of Faust from the maybe-unlikely 1984 Notre Dame win in Baton Rouge against sixth-ranked LSU that ended up on the cover of the magazine.)

Lee, who concluded her freshman year by winning the Association for Intercollegiate Athletics for Women (AIAW) national individual singles tennis title, recalls receiving a handwritten note of congratulations that summer.

“We played that tournament after spring semester ended,” says Lee. “I didn’t even return to campus. Coach Faust was the one person who sent me a note to acknowledge what I’d done.”

Decades later, Faust is no less in love with Notre Dame and its people. Four times every autumn, he flies in a friend’s private plane from Akron to South Bend.

“We fly in about three hours before the game and leave immediately after,” Faust says. “They issue me a credential, but I keep it in my pocket. All the ushers know me.”

Everyone at Notre Dame knows Faust. And everybody loves him.

Given the football record, Faust might have cringed at the thought of coming back to Notre Dame.

Amazingly, other than the football losses, he wouldn’t change a thing about his Notre Dame experience. He loved every minute of it. And he’d do it all over again.