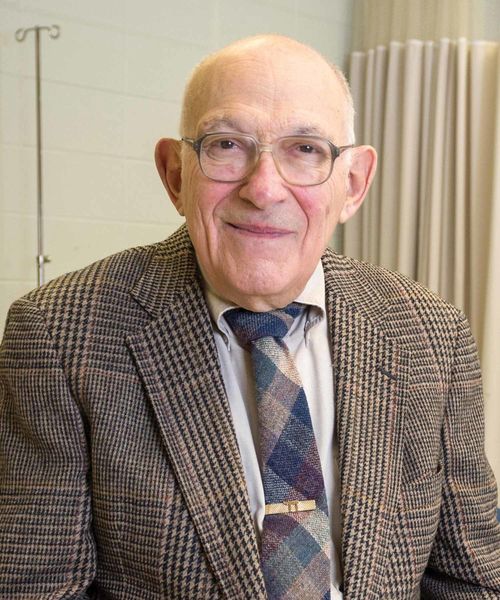 He spent 50 years at Notre Dame Stadium on University of Notre Dame home football Saturdays—yet he never saw many downs of football.

Dr. Howard Engel, a longtime but now retired South Bend internist, began volunteering at the first-aid facilities for Irish home football games not long after he started practicing in town in 1960.

“We started with one room on the west side of the stadium,” Engel says. “In the beginning I would drive over to Saint Joseph’s Hospital and then ride out to the stadium in the ambulance. Later I would bring one or more of my kids with me, and the ushers would just push them through the gate.

“At some point when Bob Cahill was the ticket manager, we began receiving two tickets for each game. They were great seats, right under the press box, and my wife Sondra and one of my kids would usually go to the games.

“Eventually they added a second first-aid room, so there would be four doctors working on game days. Initially one of the ushers would come to me in the third quarter and give me an envelope containing a $10 bill. I’d go to a concession stand and get singles and quarters and give everybody $2.50. It was big business. At the end of the five-game home season I made a $50 contribution to the University.”

Over five decades of football games, Engel has forgotten more tales than he remembers. He absolutely remembers the 1965 season when his father was murdered on a Thursday and buried on Friday, yet Engel still came to the Irish game on Saturday because no one was available to cover for him.

“The last year I was there, at halftime of a game they brought in an older man who was quite ill and was in a wheelchair. The weather was terrible—it was just a nasty day to be out there watching a game,” says Engel.

“I called his daughter, and I told her I didn’t think it was right to bring someone in his condition out here in weather like that. She cussed me up one side and down the other.

“But we did a service, we took care of people and generally there were no complaints. And I had a parking place right next to the stadium when you could do that—that was hard to beat.”

Engel recalls another encounter that sticks in his mind.

“A guy came in at halftime of one game, he apparently had been found under a tree and he had been having chest pains since he left home. We got him out of there and he eventually died after having a heart attack after he reached the hospital. We got a letter from his wife, and it said, ‘John would have been happy to know that when he left at halftime Notre Dame was winning.’”

Engel attended Hyde Park High School in Chicago and later the University of Chicago both as an undergraduate and then for medical school.

“I rode the streetcar to high school and walked to college and medical school,” he says. “I was educated basically in Hyde Park for 20 years.”

He lived at home until his uncle and brother convinced him to move away in his final year of medical school. He ended up rooming with his future wife’s former boyfriend.

“My grandfather died in 1942 and we had an extra bedroom and so my mother rented out the room. I didn’t really like that idea, but it’s interesting how things work out,” says Engel.

“On January 1, 1944, a guy moved in who had just received his PhD from Purdue in biochemistry. He was going to go to medical school at Chicago, and so he stayed with us until 1947. He left and then came back to teach at the University and, interestingly enough, he was the one who told my mother in March of 1951 that I was admitted to medical school. He sort of paved the way for me.”

After graduating from medical school in 1955 he spent a year as an intern in Cleveland, two years at the National Cancer Institute of Health in Bethesda, Maryland, and two years at Barnes Hospital in St. Louis as a medical resident before coming to South Bend to start a practice as an internist in 1960.

Though Engel never officially worked on staff at Notre Dame, he was on the referral end of several cases that resulted in longtime friendships and relationships with Irish athletes and coaches.

“One afternoon in 1966, Bob Speybroeck, who was a local pediatrician and the physician with the Notre Dame health services, called me and said the second-string quarterback, Coley O’Brien, had just come down with diabetes. Coley recently told me the week before the discovery that he was urinating frequently and was thirsty all the time. So, anyway, they checked his urine and found the sugar level high and diagnosed him.

“So we hospitalized Coley before the 1966 Navy game. On the Saturday of the game, I was watching the game while visiting him in the hospital. At one point I said, ‘What play do you call next?’ He said, ‘Whatever the coach tells me.’ So I learned something there.

“We taught him how to use insulin, and for a week he lived in the hospital and still went to class. Shortly after that the 1966 Michigan State game came up and they asked me to go with him to East Lansing. At that time you could not check blood sugar with finger sticks like you use today—we had to look at urine. He went into the game in the first quarter—I think it was 10-0 by then—and played the rest of the game. The next week was the USC game in Los Angeles and they wanted me to go with them, but I had a fear of flying and so I called one of my medical school classmates who lived out there and he met them and he was there at the game.

“The next year Coley went back to being a halfback and I went to one other game with the team in 1968. But my relationship with Coley continued over the years, his daughter came to school here and we sort of inherited her. And so most every time he comes to town he stops to visit.

“The impressive thing about Coley is that he is one of the luckiest human beings I’ve met. He’s had no sequelae—no eye, heart, kidney or nerve problems due to his diabetes. I always tell him there must be someone behind him looking after him if he ever gets in trouble.”

“We just sort of inherited him along the line. He is another guy for whom none of this ever went to his head. His mother has stayed here with us, and we’ve had a relationship with George for all these years. We go out for dinner sometimes when he comes to town. And, a little like Coley, George had a son who came to Notre Dame and was a walk-on in football here.’

“John came to my office, I guess, when he was a sophomore. He had a swollen leg, we discovered he had a clot and so we hospitalized him and did what we needed to do. He did not play that year, of course. He began to hang out here, he got to know our kids and eventually we got to know his wife and daughter.

“I remember the day of the UCLA game in 1974 he was praying with his family before the game. I said, ‘Are you praying to win?’ And he said, “No, that nobody will get hurt.’”

Another time Irish basketball star Adrian Dantley was lying on the ground near the Irish team bench during a game, as Engel just happened to be leaving the Athletic and Convocation Center.

“So I went back with him to the locker room, and we could not immediately ascertain what was wrong with him. But I told Digger (Phelps, the Irish head coach), ‘I know you’ve got a big game coming up, but you can’t play him until we find out what this is.’ To Digger’s credit, there was never any discussion or argument about it—and it was the same way with Shumate.”

Wrote McCormick, “I am not only his patient, I am also his friend. He is bright, well informed, argumentative, demanding, contentious and totally devoted to the well-being of his patients. Being Jewish, he would squirm at being called ‘Christlike.’ Let him squirm. Who cares? The man took me (and countless others?) to the emergency room, stayed with me for two and a half hours late at night and saw me through hard times. He calls me many colorful names; therefore I’ll call him a colorful name, ‘Christlike,’ and let him live with it.”

Engel may technically be retired these days, but that doesn’t mean his work is over.

His wife Sondra has multi-infarct dementia.

“She has had several strokes which were not obvious—until they became sufficient in number to cause memory loss,” says Engel. “So she has basically lost her memory. She is unable to walk—so she’s now in  a wheelchair. She still went to (Notre Dame) basketball games for several years in her wheelchair.

“We take care of her. So I work every day. I have a job taking care of what needs to be taken care of.

“I always gave my patients what I thought I would like to have if I were them—so I take care of her the best I can. And that’s where we are.”

Engel long was known for his no-holds-barred commentary when it came to bedside manner.

Sondra has brought out a more mild-mannered approach, yet it’s the same Howard Engel.

“In order to do these things and have a family, one must have a willing partner—and for the last 59 years Sondra has been that willing partner,” he says.

Still helping people in South Bend after all these years.