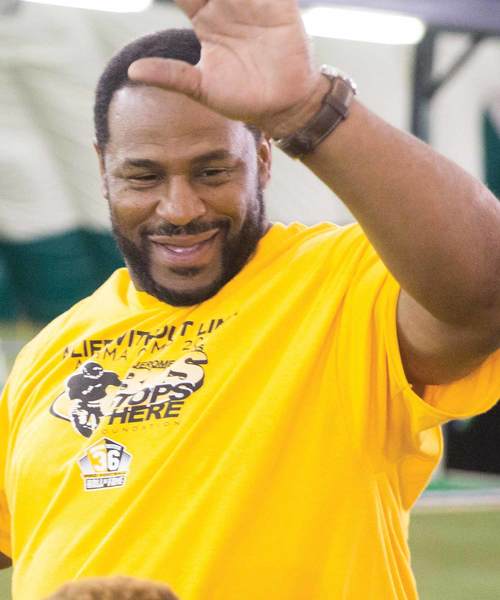 The wheels on the bus go around and round, all through the town.

Former University of Notre Dame football star running back Jerome Bettis may or may not have heard that well-known nursery rhyme from his mother Gladys when he was a youngster—but the lyrics certainly fit the manner in which his “Bus Stops Here” foundation has continued to give back, particularly in the Pittsburgh area where Bettis made his name as a Hall of Fame Steeler runner.

A wide-bodied back who absolutely embraced the physical style of football that his Notre Dame and Pittsburgh Steeler teams loved, Bettis earned the nickname “The Bus” and it fit him perfectly.

“The Bus Stops Here is an opportunity to give back to the communities that have given me so much,” he says.

“I was fortunate to have received help when I was a kid, so I view it not as a hand out but a hand up. It’s to give kids the opportunity to find what it is that drives them—give them an opportunity to be successful, whether it’s giving them the tools or giving them a pat on the back or a hug or an arm on their shoulder.

“That’s the idea of the foundation, that’s what I wanted to do and so through the programs we’re able to achieve that by helping the kids.

“Ultimately these are great kids—they’re strong, they just need direction like all of us do at some point in our lives. I’m just proud and thankful that at some point I have the opportunity to help provide some direction.”

The oldest program under Bettis’ purview is the Cyber Bus program which started in 2001.

“We’re in the process of revamping that program,” he says. “We would take kids from the inner city and take them to a college campus—show them they can have success on a college campus and that it’s not a foreign universe and that they belong.

“Not every kid is going to go to college, but they all need a skillset they can utilize in the 21st century. Now they know how to build that computer, how to service it, how to upgrade it and they take it from there.

“Now our age has advanced far beyond that – computers aren’t obsolete, but we use our phones for most of the information and data we receive. So now the program is moving to a new era, and we’re working to revamp it and reach the kids and show them the technology that’s available to them.”

That computer-engineering program was affiliated with Duquesne University and the Pittsburgh Public Schools.

It seems like just yesterday that Bettis was motoring around the Notre Dame campus on his bicycle with the oversized tires. He finished his Irish career with 1,912 rushing yards—including 972 and 16 rushing scores as a sophomore in 1991 and 825 more yards as a junior in 1992.

He set a Notre Dame scoring record in 1991 with 20 total touchdowns, and he helped the Irish knock off third-rated Florida 39-28 that season in the Sugar Bowl by running for 150 yards and three TDs, all in the final period (as the Irish rebounded from a 16-7 halftime deficit).

Bettis began his professional career with the Los Angeles and St. Louis Rams (1993-95) after becoming the 10th overall selection in the 1993 NFL Draft. He spent his final 10 years in a Steeler uniform, rushing for 13,662 overall yards (fifth in NFL history) to go with 91 TDs. His best season in Pittsburgh came in 1997 with 1,665 ground yards—and he helped the Steelers win Super Bowl XL in his hometown of Detroit after the 2005 season in what proved to be his final football game.

While the on-field version of “The Bus” has not been operational for more than a decade, Bettis’ foundation work rolls on and on:

—At the 11th annual Caring for Kids dinner the “Bus Stops Here” named Bettis’ former Steeler teammate Hines Ward as the 2016 Humanitarian of the Year and presented former Steeler running back Merril Hoge with the first Courage Award for his battle with non-Hodgkin lymphoma.

—He has delivered more than 1,000 pairs of football cleats to children in the Detroit school system.

—His foundation has teamed with AT&T and the Salvation Army to create the Jerome Bettis Toy Drive for children in the Pittsburgh area.

—Other foundation programs included Innovation Huddle (to provide children access to computer science, technology, mathematics and engineering programs), S.C.O.R.E (Suits Can Obtain Revitalized Excellence to provide business attire to inner-city youths for college or professional interviews), Take to the Lanes (designed to teach students ages 8-16 the fundamentals of bowling, one of Bettis’ personal favorite sports) and A Life Without Limit (an educational asthma awareness program).

Said Ward, “Jerome has given so many guys the blueprint of what it means to be a professional athlete, not just on the field but what you mean to the community off the field.”

Bettis has never forgotten the challenges of growing up in the inner city.

“I’m able to do the same thing for people that people did for me,” Bettis says. “That’s it in a nutshell. I have an opportunity to repay, to pay it forward.

“Forty years ago someone went out to change one kid’s life forever. I’m here to say I was that kid. You changed my life.

“I want to do the same thing – influence or change one kid’s life the same way it happened for me. That’s my job to pay it forward and I’m proud to be able to do that.”

Bettis looks back at his days growing up in Detroit and attending the camp of former Michigan and Detroit Lions star Reggie McKenzie.

“Reggie had a camp in Detroit, and I grew up going to it,” says Bettis. “He played at Michigan of all places, but he was a great person. He just made a poor choice.

“He made a decision years and years ago to start a football camp for kids. He made it free and he brought out NFL players, and that’s when I realized that there was someone from the same neighborhood I lived in who was from the same high school I went to. That was Pepper Johnson, who went on to have success in the NFL and here he was coaching me as a high school kid.

“It clicked then for me that—you know what?—it exists and it’s possible. Coming from the environment I was in, I did not think it existed. For me, football was something you watched on television. I thought I could never reach that level.

“To get the opportunity to see these guys, to know them, to touch them and feel them, to know they put their pants on the same way I did—that inspired me and made me say I could be a success at this. It changed my total mindset.

“I went up to Reggie McKenzie and thanked him, and I asked him why he did this camp. He said he just wanted to make a difference with one kid. And I told him right then and there, ‘Reggie McKenzie, I am that one kid, you changed my life.’

“So I want to be that guy to help influence and inspire that next generation because someone inspired me.”

Recipient of the 2007 Notre Dame Monogram Club Moose Krause Distinguished Service Award, Bettis is convinced that there is a simple equation involved.

“Success is the ability to make other people successful. Hopefully someone will come up to me and tell me I made a difference in their life.”

And the wheels on that bus just keep going around.