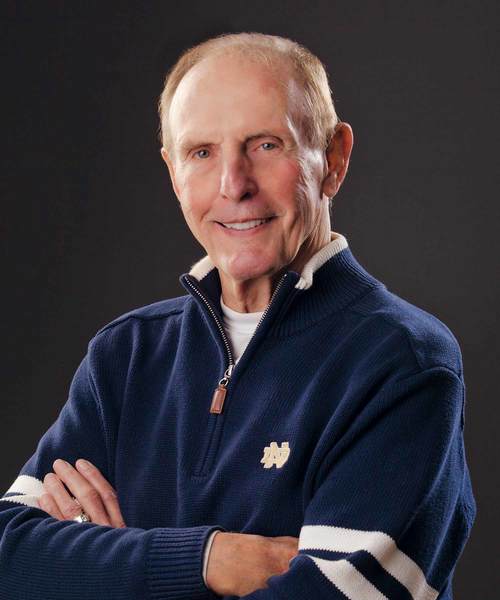 Jim Morse has always seemed to have a vision.

He had it as an 8-year-old child, sitting at home in Muskegon, Michigan, listening to a football game involving a university he did not know. It was the end of the 1943 season, and Notre Dame was playing against Great Lakes, a game the Fighting Irish would lose in a year that still ended with an unofficial national championship.

“I thought, ‘Notre Dame, that’s a neat name,’” Morse remembered. “From that day forward, I just started following them as a fan.”

The child’s discovery would eventually lead to a relationship that has extended throughout Morse’s 80 years, from a record-setting career as a halfback with the Fighting Irish to success in business and broadcasting to decades of philanthropy and service to his university as one of its major benefactors.

Morse’s vision was especially memorable when a young United States senator visited the campus early in 1957 to accept the “Patriot of the Year” award and deliver a speech.

Morse, the right halfback and captain of the 1956 Fighting Irish, and his friend Paul Hornung, the left halfback and Heisman Trophy winner, were asked to give a tour of the campus. The visitor wanted to get some coffee, so the three found a spot, which is how Morse had the chance to make a prediction for John F. Kennedy.

“Jim Morse looked him right in the eye and said these words,” Hornung remembered. “He said, ‘You know, someday I think you’ll be president of the United States.’

“As I remember, he just smiled,” Morse said of the future president.

More than three years before Kennedy would be elected, Morse saw the possibilities. “I think (it was) just his presence,” Morse remembered. “I’m not sure how to describe it. It’s like when you go around Notre Dame. It’s just a feeling. It’s hard to put your finger on it.

“But there’s no question he had a magnetism about him,” Morse went on. “He had charisma. The things you were looking for at that time.”

Morse, a three-year starter, experienced the thrills of a 9-1 record as a sophomore in 1954 and 8-2 as a junior in 1955 and the disappointment of a 2-8 finish in 1956. Those were the first three seasons under Irish head coach Terry Brennan, who was also the professor in one of Morse’s law classes. “I know I didn’t get any preference,” Morse said.

As a sophomore, Morse rushed for a record 179 yards against USC. He scored two touchdowns, one on a 72-yard, fourth-quarter run, in a 23-17 victory.

As a junior, his 17 receptions and 424 yards gained led the team. In his senior season, Morse’s 442 receiving yards set a school record.

“He was a great teammate,” Hornung said. “He was the best player I had to work with in 1956. Whenever I wanted to throw a pass, I’d think of Jim Morse. And whenever we wanted to run the football, I had to give it to Jim.”

Hornung and Morse were drafted by the Green Bay Packers. Morse chose to play for the Calgary Stampeders of the Canadian Football League. His professional football career lasted two seasons before Morse returned to Muskegon and sold life insurance for Northwestern Mutual.

“I didn’t think that was going to be my life’s calling,” he said. He worked in sales and public relations for a trucking company, Wagoner Transportation, a firm that hauled Standard Oil’s products throughout the western half of Michigan’s Lower Peninsula and all of the Upper Peninsula. After four years, he became executive vice president and general manager.

There would be more. Jim and Leah Rae Morse were raising seven children, so he was always searching for additional income.

“I went out to a local radio station here and told them I’d probably be pretty good at broadcasting a local sports show,” he said. “And they ushered me out the door.

“So what I did then was I found what they charge for a five-minute newscast, and I doubled the rate and went out and sold the show myself. Then I went back to the station and I said, ‘Well, how do you like me now?’

“And I immediately became their largest client, because I did three shows a day, six days a week, and they were all fully sponsored.”

He worked for a television station in Grand Rapids for two years, broadcasting at 11:30 p.m. On a trip to New York, he spoke with a friend, Frank Gifford, who had played at USC.

“I said, ‘Frank, how do you break into the national stuff?’” Morse remembered, and Gifford’s advice led to an opportunity. The CBS television network had just won the rights to the NCAA game of the week and planned to carry three games each weekend. That meant they would need three analysts.

The three analysts would be Morse, Brennan and John Lujack, the 1947 Heisman winner.

Morse worked on the college games for a year and then moved to National Football League telecasts on CBS. One day he received a phone call from Howard Cosell with news of another opportunity: The ABC radio network was going to broadcast Notre Dame football, and the analyst’s job was Morse’s if he wanted it. Once Morse was given permission by CBS, he was off on weekend adventures from Irish games on Saturdays to NFL games on Sundays. He remembered scrambling from a Notre Dame night game in Miami to an NFL game at Minnesota the following afternoon. Jim Finks, the general manager of the Minnesota Vikings and once a coach on the Notre Dame staff, spotted Morse after he arrived.

“He took one look at me and said, ‘You don’t look too good,’” Morse said, and laughed.

He broadcast Notre Dame football from 1964 to 1967, starting with Ara Parseghian’s first season as head coach, the year a 9-1 record returned the Irish to national relevance.

“Everyone was anxious for Notre Dame to have some good years after the five previous seasons,” Morse said. “Ara came in with a lot of enthusiasm. He was probably the most intense coach I’ve ever been around, and I’ve known every Notre Dame football coach since Frank Leahy.”

Eventually, his business interests would include radio stations, hotels and factory outlet malls. He would become a member of the Notre Dame advisory council for the College of Arts and Letters. He would join the Athletic Alumni Development Committee. Morse would provide a football and baseball scholarship. He provided his aircraft to the athletic department. His commitment to the academic progress of all students led to the 2001 dedication of the James and Leah Rae Morse Center for Academic Services, a facility on the South Quad that serves athletes and any students in the First Year of Studies. He provided the benefaction when the University installed FieldTurf into Notre Dame Stadium prior to the 2014 season.

Morse’s motivation was simple. His college education, and that of his son Jim, had been made possible by a football scholarship. As the University’s academic profile has increased, there has been more pressure on athletes to compete in the classroom.

“We’ve got the kids here now, let’s see what we can do to keep them, in terms of academics,” he said. “In the past, different aspects of the [academic] help were spread all over the campus. Now it’s all in one building. No matter what your problem is, this is where you go to get it fixed.”

In 2004, Morse received the Edward W. “Moose” Krause Distinguished Service Award from the Notre Dame Monogram Club in recognition of his years of service to his University. Morse has maintained a presence on campus during football weekends and other functions.

The eight defeats in his senior season—five to ranked teams, three of which were in the top three—have never completely gone away.

“The disappointments of the ’56 season, you never really get over that,” Morse said. “We really had a bad year, and there was nothing we could do about it. We did not have as much talent as the teams we were playing. I guess what I took away, more than anything else, was simply the fact that you’ve got to have the players.”

As the years would pass, on golf courses, at reunions, or in their frequent conversations, Hornung would provide the reminder, whenever necessary, that Morse had been the captain of the team with the most losses in Notre Dame history. The unwanted distinction would last for 51 seasons, and Hornung would not allow his captain to forget it.

“Absolutely,” Hornung said, and laughed. “I never let him get too far ahead of himself.”

Hornung understands that for nearly six decades, his old friend has had a convincing answer.

“I always tell him I made him a Heisman Trophy winner,” Morse said, “so he’ll have to cut me a little slack on our record.”