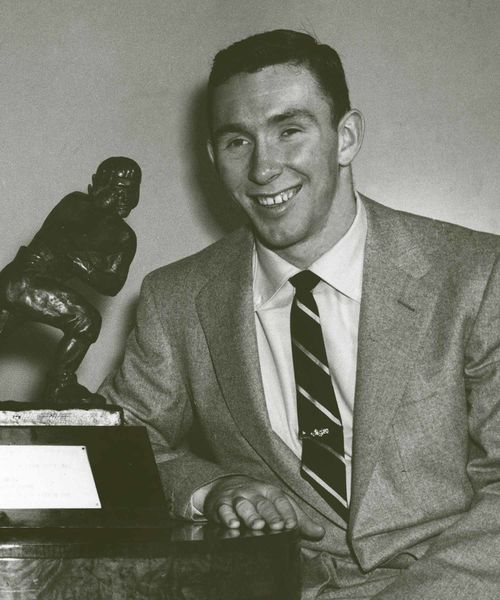 The University of Notre Dame still claims seven John Heisman likenesses— better known as the Heisman Memorial Trophy—matching Ohio State for the most in college football.

While all seven honorees are justifiably proud of being recognized as the outstanding player in college football in a given season, 1953 winner John Lattner stands out for his innovative and productive use of his Heisman. With daughter Maggie Skiver acting as booking agent, Lattner, for the last several years, has made the trophy available to various charities for fundraising purposes.

“People are fascinated by it,” Lattner said. “They want to touch it, have their picture taken with it.”

Special Olympics benefit? Put Mr. Heisman on the guest list. A youth sports event in need of a headliner? Let’s talk. Bingo Night at your church or school? Book him.

Lattner asks nothing in return, only that the trophy be handled with care and that any money it generates goes to charity. The trophy stays at Maggie’s home when it isn’t on the road. There is no formal application process other than an email, a written request or a phone call to her, although bachelor parties and other outings of that ilk need not apply.

“Maggie makes the decisions,” Lattner said, “but we agree we want some good to come of this, so we try to keep it on the up and up and make sure it’s for a good cause.”

The iconic trophy, Lattner recalled, was a must-see attraction when he displayed it at the restaurants he operated in downtown Chicago, first at Madison and Dearborn and later in the Marina City riverfront complex after the original location was destroyed in a fire. The trophy perished as well, but New York’s Downtown Athletic Club provided a replacement after Lattner took it upon himself to provide a check for $300.

Lattner sold the restaurant and shifted to a career in commercial printing in 1972. He remained an in-demand figure on the Chicago banquet circuit owing to his Notre Dame exploits and his universal appeal as a twinkly-eyed, self-deprecating storyteller with a one-of-a-kind visual aid.

“It seemed like every time I was approached about giving a speech, the guy would ask if I could bring the trophy,” Lattner said. “It finally dawned on me that the trophy was a lot more popular than I was, so let’s put it to good use.”

Maggie Skiver is one of John and Peggy Lattner’s eight children. Like her dad, she is amazed by the reaction to a sighting of what might be the most recognizable trophy in sports.

“There’s definitely an aura about it,” Maggie said. “I guess because I grew up around it, it was never that big a deal to me, but a lot of people who see it are just awestruck by it, even now.”

Last year, as dual-threat quarterback Jordan Lynch from Northern Illinois was bidding to join Lattner as the only Illinois-born Heisman winners, the Chicago Sun-Times did a catching-up story on Lattner. The piece made note of his willingness to put the trophy to work as a fundraising tool, and it now has become a more popular attraction than ever.

“I wouldn’t say the demand is off the charts, but it definitely has picked up,” Maggie said.

“It’s probably gone 70 percent of the time, and more than that during the football season. But it’s going to be out of commission for a while in December. It’s going in for some reconditioning.”

Lattner, as a previous winner, is invited to New York for the Heisman Trophy presentation every year. He made a special effort to attend last year’s event in support of Lynch, the eventual third-place finisher behind Jameis Winston of Florida State and A.J. McCarron of Alabama.

“What an outstanding young man,” Lattner said of his fellow Chicagoan, who failed to make the Bears as an undrafted free agent. “I hope he gets another shot at pro football if that’s what he wants to do, but I think he’s one of those guys who’ll be successful in whatever he does.”

Lattner was delighted to learn he was mistaken in his belief that he and Lynch were meeting for the first time during Heisman weekend. Ten years earlier, Lynch and his fellow St. Christina Cardinals were honored at a grammar school football banquet on Chicago’s Southwest Side. The guest speaker was Johnny Lattner, who brought along his Heisman Trophy.

“I can’t say I remembered it, but Jordan did.”

Lattner thoroughly enjoys Heisman weekend, though he marvels at how far the incessantly hyped, nationally televised extravaganza has come from his humble experience.

Thanks to Frank Leahy’s expansion of a Knute Rockne-created brand, Notre Dame was the most avidly followed team in the nation before, during and after Lattner’s three varsity seasons. A Chicago native and a product of Fenwick High School, Lattner was leaning toward Michigan as his college choice until a campus visit changed his mind. He became a marquee player for the Irish, scoring 20 touchdowns and accumulating 3,095 all-purpose yards in three varsity seasons, a school record that stood until Vagas Ferguson surpassed it in 1979.

“I also fumbled five times in one game against Purdue,” Lattner recalled with a groan. “I thought I was going to lose my scholarship.”

After placing fifth in Heisman voting as a junior, Lattner was considered one of the favorites in his senior year. He did not disappoint, compiling 1,279 all-purpose yards with 11 touchdowns on offense and intercepting four passes as a two-way standout for a 9-0-1 Irish team that finished second to Maryland in both news-agency polls.

“I don’t even remember what day of the week it was, but I was told to be in my dorm room in case the call came,” Lattner recalled. “At 4 p.m., Moose Krause, our athletic director, called the pay phone at the end of the fourth-floor hallway at Alumni Hall to tell me I won.”

Lattner had to step away from his working-class roots and buy a suit for the trip to New York and a dinner at the Downtown Athletic Club, which sponsored the Heisman. He was permitted one guest, and he brought his mother.

“It was the trip of her life,” Lattner said. “She wanted to see the big ships, she kept telling me. The father of a classmate of mine took us out on the town the night before the banquet. We went to Toots Shor’s and some other places and ended up at the Copacabana. Mom ordered a Miller’s at the Copa because her brother worked for Miller Beer in Chicago.”

Lattner’s recall of such moments is so vivid it’s hard to believe they took place 61 years ago. Or that he turned 82 in October—he’s blessed with the vitality of a much younger man.

“I had a procedure on my lungs done over the summer, but I’m feeling pretty good,” Lattner said. “I’m working out, I’ve got my appetite back ... Life is good.”

He makes it down to Notre Dame occasionally, once for a Lou Holtz-Brian Kelly outing to which his Heisman contributed $12,000, Lattner was told. He follows the Irish avidly and was still reliving this season’s Florida State game days later. An easy chair in the TV room is his preferred vantage point for most games, “easier on the body” than dealing with traffic and parking on football Saturdays.

Lattner worked until he was 80, finally retiring as vice president of sales for a suburban Chicago printing firm. The former Peggy McAlister has been his wife for 56 years. Those eight children have blessed them with 25 grandchildren, many of whom have achieved scholar-athlete distinction at Fenwick, their grandpa’s alma mater, as Lattner looked on proudly. Six of his grandchildren are competing in sports at the college level.

“I try to keep up with all of them,” Lattner said.

Lending the Heisman out for charitable causes is a way to express gratitude for a life well lived.

“Getting a scholarship to Notre Dame, raising my family, doing OK in business—I’ve had a lot of good things happen to me,” Lattner said. “Winning the Heisman is definitely one of them. Whatever they raise with it is probably more than they would have raised if they didn’t have it. That’s how I look at it.”