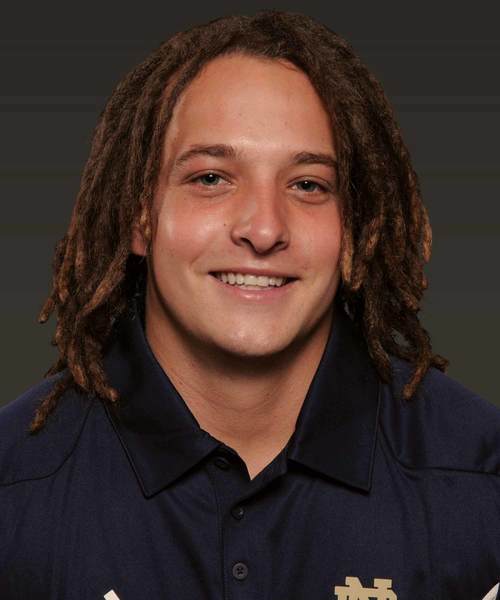 From Kenya and back

Students—and even student-athletes—these days routinely find their ways to the University of Notre Dame from all over the globe.

Yet maybe no one took as circuitous a path as Jude Rhodes did on his way to not only a degree but also to a spot as a punter on the Irish football squad.

When Jude was 7, Rhodes’ parents—both Protestant missionaries—moved the family from Mississippi to Kapsowar, Kenya, an African village of less than 10,000 inhabitants in the Rift Valley Province. His father worked as the only surgeon at a small Christian hospital, and his mother home-schooled Jude and his three older brothers and sisters and worked at a local orphanage.

Says his mother, Laura, “We placed a premium on education here. We tried to emphasize with Jude and his siblings that education has to have a purpose. Why are you getting educated? And why do you go about achieving the very best that you can? It’s because there’s a hurting, dying world out there. And you, coming from a country and a culture of affluence, have a responsibility because what you do with that will define who you are.”

As a teenager, Jude often assisted his father in the operating room. He also began kicking footballs through makeshift goalposts welded together by his older brother, who had played football before the family moved to Kenya.

“When I was 15, my parents arrived back in the U.S. We drove through South Bend and we stopped at Notre Dame just to take a look,” says Jude. “And I thought, ‘This is it. I can’t go anywhere else.’

“The three highest points on the Notre Dame campus were the Basilica, the Main Building and the library.

“The Basilica is the highest point and that represents the importance of God.

“The Main Building has the Virgin Mary on top and that represents the importance of family.

“The third tallest building is the library and that represents education.

“I can get a top-20 education from a school whose third priority for me is when I’m in the classroom—I think that’s a very special thing and a very unique thing.”

Jude’s infatuation with Notre Dame began when he used to stay up all night in the fall in Kenya listening to Irish football games on short-wave radio.

Says his father, Dr. Bill Rhodes: “When Jude started kicking, his big brother built goalposts, and he put them down on the flat part of the field. It really created a very vivid imagination for him and allowed him to begin training.”

After graduating from Nordhoff High School in Ojai, California, Jude applied to Notre Dame in 2010 and was not accepted. He enrolled at the University of Arkansas at Little Rock, never losing sight of his original goal. He could never get Notre Dame out of his mind.

“When I was at the University of Arkansas at Little Rock, I only sat in seats that were blue, gold or green,” says Jude, “because it was a reminder to me of where I was trying to get to.”

One year later, after earning a 4.0 grade-point average, he reapplied—and he made the long journey to South Bend for an answer. He walked the final five miles from the airport to campus.

“Jude actually showed up on our doorstep and said, ‘I don’t know if I’m admitted, but I don’t want to go back to the University of Arkansas at Little Rock without first finding out my decision.’ I said, ‘Jude, I actually just signed your decision letter this morning,’ and I gave him a huge packet and he just broke down in tears, crying.”

Says Jude, “It was a powerful moment to hear that I’d been accepted after struggling to make it happen and after taking so long to get there.

“It was a special moment.

“It was a special day.

Financial aid enabled Rhodes to join Notre Dame’s class of 2014. Majoring in history, he quickly found a community in Keough Hall (he coached the Keough interhall basketball squad) and a spiritual home in South Bend.

“It was 40 guys sharing a hallway—we studied together, we played together, we went to Mass together. The whole experience really was precious to me.”

Adds Laura: “Notre Dame at its foundation and in its heart has a reverence for God. At every level he had the ability to communicate spiritual ideas and be challenged and to question and to grow and to develop spiritually.”

One dream remained for Rhodes, but that first fall no football walk-on tryouts were held. Still, his resolve never wavered.

“When you hear someone say they want to walk on to the Notre Dame football team, you want to encourage them,” says Rev. Pete McCormick, C.S.C., Notre Dame’s director of campus ministry and one of the Irish athletic team chaplains.

“Everyone thinks of Rudy, but you realize at the same time what it’s going to take. The percentage of people who are willing and able to make it? Very slim.”

Rhodes remained steadfast in his commitment: “I was not going to wear an ND logo until I was on the team. I didn’t even want to be in that stadium unless I was on the team. It made for some lonely Saturdays, but it kept me mindful of what I was trying to accomplish.”

The following spring he finally got his chance. On a quiet Notre Dame practice field, Rhodes was provided 20 punts to make the team. And he performed well enough to win a roster spot beginning with the 2012 season. For the next two years Rhodes dressed for every Notre Dame home game.

Offers Bill: “He did it. Thinking about how he got there and made it happen impresses me—it really impresses me.”

And the experience was never lost on Jude.

“I remember the first time I walked into the stadium for a game. I just thought, ‘I was right. This is better than being anywhere else. There’s nowhere in the country I’d rather be.’

“I was right the whole time. This is better.”

Rhodes’ dreadlocks made him a recognizable figure on campus.

“In a lot of African cultures, it’s common when a male leaves home to grow his hair out, especially when he travels for conflict,” says Jude. “People recognize how deep he is in the movement based on the length of his hair. So when I was a junior in high school I grew the dreadlocks and then just kept them.”

“I am applying right now for post-baccalaureate programs that will help me finish my premed requirements, in hopes that I can go to medical school. If God allows, I would start that next summer,” Rhodes says.

“It is the greatest concern of my life, that I don’t waste the opportunities that I’ve been given. Notre Dame has been a real encouragement to my dreams of coming back to Africa to work in a medical capacity.

“That’s what makes them dreams.

“That’s what makes fulfillment of the dreams so special.”

“I remember the first time I walked into the stadium for a game. I just thought, ‘I was right. This is better than being anywhere else. There’s nowhere in the country I’d rather be.’”