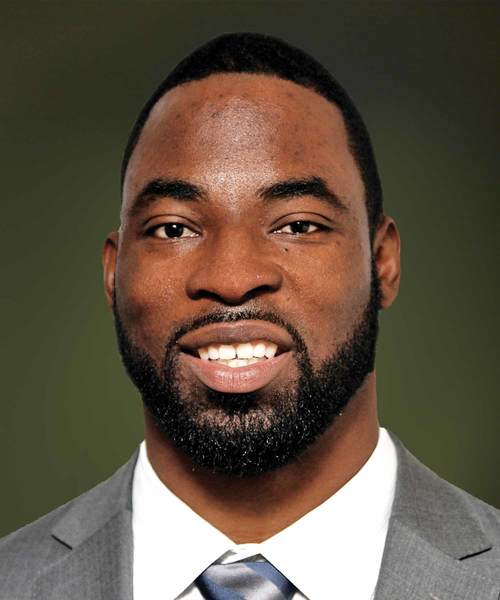 His own version of rushing to read

Kellyton, Alabama, with its population of 217, has a high school graduation rate of less than 40 percent. Median household income is about $29,000, though the majority of residents earn less than $10,000 annually.

So how does a kid from this dot on the map of Coosa County end up with two Super Bowl rings?

From a young age, Justin Tuck loved to read and developed an early conscientiousness for academic success. He did well enough in high school to earn a scholarship to the University of Notre Dame where he completed a management degree in 2005. Apart from that, there would be no Justin Tuck, defensive end and two-time Super Bowl champion with the NFL New York Giants.

Tuck had the advantage missing from most underprivileged kids’ lives: the village mentality. In addition to growing up with six siblings, Tuck is related to about three-fourths of Kellyton’s residents. His parents, aunts, uncles and other extended family members were present and involved in every aspect of his upbringing from school to sports to spiritual development.

It’s been said you can’t fling a dead possum in Kellyton without hitting a Tuck. “My relatives, they were everywhere!” Justin says, half exasperated, half brimming with pride.

Now, as one of the NFL’s top defensive players, recently having signed a two-year contract with the Oakland Raiders, Tuck works to introduce similar structure and values to youngsters just like he used to be.

Together with his wife, Lauran, a 2005 Notre Dame graduate who also holds a master’s degree in nonprofit leadership from the University of Pennsylvania, he founded Tuck’s R.U.S.H. for Literacy program as a way to formalize his advocacy efforts.

“We had done so much through charity work, but we didn’t have anything to call our own,” Justin says. “We’re very passionate about kids, we’re very passionate about education and we really wanted to do something that was all-encompassing. We felt as though literacy was a number-one stumbling block for kids and a great educational blueprint, so we started R.U.S.H. for Literacy.”

The acronym stands for Read—Understand—Succeed—Hope. The literacy campaign actualizes that blueprint as a powerful force toward interrupting the cycle of systemic poverty. Since 2008, more than 13,000 students in low-income areas have received books, school grants and life-changing opportunities through R.U.S.H. for Literacy.

The program addresses one of the perennial concerns in poverty-stricken areas: the cumulative effect of an inability to read proficiently accounts for 63 percent of kids who fail to graduate from high school. Among other factors, lack of summer learning opportunities for low-income children contributes to a staggering two-year lag in reading proficiency by the time those children reach middle school.

For this reason, Justin and Lauran are especially concerned with students in fourth through eighth grades. R.U.S.H. for Literacy includes partnerships with experts in literacy and reading pedagogy, who sit down with the Tucks each year to choose books that meet their criteria for content and age-appropriateness. The foundation then provides copies of the selected books to every student within the campaign’s affiliate schools and educational programs.

As part of their participation in the R.U.S.H. program, students also are invited to write an essay on a specific topic, which Justin and Lauran choose annually. The Tucks personally read every essay submitted. Authors of the best essays are rewarded with tickets to an NFL game and the opportunity to spend time with Justin and Lauran.

Because the Tucks believe in the importance of investing in the communities close to them, their program has focused on schools and families in New York (especially the Bronx, Harlem and Brooklyn), Essex County, N.J., central Alabama and most recently the Bay Area in California. However, applications for R.U.S.H. grant monies are accepted from all over the country from educational initiatives that serve low-income students. To date, the R.U.S.H. foundation has raised more than $1.5 million and distributes programmatic grants averaging about $10,000 each.

Two fundraising outlets generate the majority of the foundation’s grant money: an annual celebrity billiards tournament and the Sack Challenge. Corporate and individual sponsors pledge a dollar amount per each sack that Justin records during the NFL season. Justin and Lauran themselves match dollar for dollar whatever amount is pledged and donated to the Sack Challenge.

A second axis of R.U.S.H. focuses on parental education and responsibility. Lack of financial literacy—understanding how to budget and save money—is often a factor that prevents families from breaking the cycle of poverty.

“We make sure our financial-expert partners have meetings with the parents [of children in the R.U.S.H. for Literacy program],” Tuck says, “and that they have the resources and tools they need to understand college savings accounts, to explain them to their children and to start saving for them. Learning to build assets is so important and, unfortunately, it’s a lesson many are never given and others take for granted.”

He expresses no small amount of gratitude for how hard his own father and mother worked to make sure they could afford college education for their children.

While professional athletes certainly can be role models, the Tucks encourage parents to embrace that responsibility as essential toward their children’s future achievement. When it comes to education, success is a family matter.

The Tucks practice what they preach by reading to their children on a daily basis. Jayce (4) is currently obsessed with dinosaur books and Jonah (1) always looks forward to family time.

“Parents have the most important role to play in their children’s lives,” Justin says. “The research behind the power of reading to your children is so compelling.”

His own parents, Jimmie Lee and Elaine, set the precedent.

“School was always the priority,” he says of the discipline he learned growing up. “We didn’t go outside until our homework was completely done. On Friday nights, even after a big game, we weren’t going out to parties or even having friends over. We came home and studied. That work ethic and focus on priorities for our future is absolutely one of the things that has made me who I am today. Believe me, it was ingrained in all of us.”

Justin is a published author, having penned an acclaimed children’s book describing what it was like to grow up with four older sisters.

Yet Justin insists the Tuck daughters ruled the roost when they were kids. He also has a younger sister and an older brother.

His book, “Home-Field Advantage,” reveals the sort of endless comedic trauma at the hands of his sisters that Justin believes helped him become tough enough to play professional football. More importantly, the book illustrates the value of family togetherness and love. Tuck’s parents have been married for more than 40 years and serve as his role models and confidants.

Growing up in a state with dynasty football programs, Tuck easily could have chosen the Southeastern Conference over Notre Dame. Laughing, he confesses Irish recruiters actually discovered him by accident.

“They were checking out another kid, but they accidentally ended up at the wrong high school. I happened to have a pretty good game that day, so they ended up talking to me instead. I didn’t really want to go that far away from home, but throughout the process Notre Dame emerged as the best possible place for me to be.”

Tuck says the academic expectations of Notre Dame were actually as much a draw as the opportunity to play Fighting Irish football.

“One of the last conversations I ever had with my grandmother,” he says, humor giving way to heartfelt memory, “was her urging me to go to Notre Dame. She absolutely believed God had a reason for those recruiters being in the wrong place. So I listened.”

Even though Tuck grew up in the Baptist church, his family appreciated the University’s faith-based heritage. As a high school student, he became the youngest member of his congregation ever to teach Sunday school. He was a spiritual leader among his Giants’ teammates and regularly assisted the team’s chaplain with Bible study leadership. His daily discipline of reading includes Holy Scripture and biblical commentaries.

“Lauran gets to do a lot of reading, she’s always got a book,” he says with obvious admiration for his wife. “I try to catch up with her in the off-season.”

Tuck names William C. Rhoden’s “Forty Million Dollar Slaves: The Rise, Fall, and Redemption of the Black Athlete” as one of the books that has had the most profound impact upon his life.

“I signed with the Giants out of college and all of a sudden I’m living in New York and there’s so much money, and I was still so young,” he says. “Fortunately, my parents and my family had formed me early on and I had the strength of that upbringing to keep me humble.”

According to Tuck, living so far from home for the entirety of his adult life has been one of his biggest struggles. After growing up in a milieu where family was everything and all the family was nearby, it’s been difficult for him at times when he’s had to miss out on significant events in Kellyton because of his obligations elsewhere. Recently, he lost three uncles and his grandfather within the space of a few months and the demands of his professional life made it impossible for him to say his goodbyes and attend memorial services.

While he understands obstacles can make a person stronger, as he says, “It’s a little different when it’s your family.” He reaches deep inside to find the strength that is more than muscles, strength that reveals itself as “unwavering dedication to accomplishing whatever you set your mind to. Lauran and I talk about that constantly. If I wasn’t doing what I’m doing then we wouldn’t have the kind of opportunities we do for giving back and for giving our kids more than we had, so we work on balance and perspective. Her faith is amazing and she is my rock when I can’t be the rock for my family the way I want to be.”

From small-town kid getting pushed around by his sisters to Super Bowl superstar taking down the likes of Tom Brady, Justin Tuck is proof that education can take you anywhere you want to go.