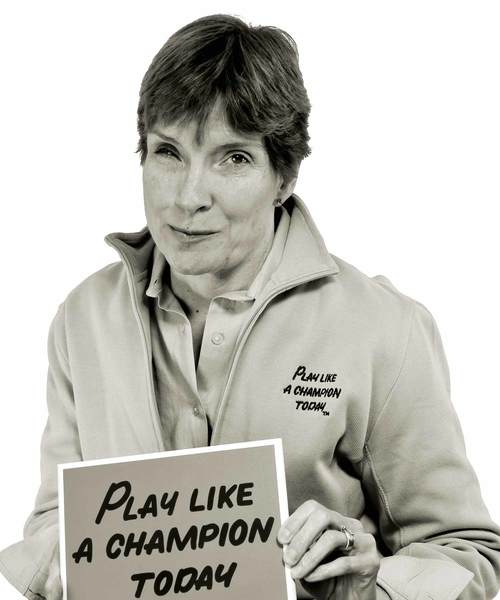 There are those who spend a lifetime searching for a sign that will change their lives. And then there’s Laurie Wenger, who painted hers.

“It was just another job for me,” says Wenger of the five simple words that she first brush-stroked in blue paint upon a gold background in the winter of 1986. “Looking back, I should have made it more formal.”

The five-word phrase has become as inextricably linked to the University of Notre Dame as “Win One For The Gipper.” Browse the two levels of the immaculate on-campus bookstore and you will find “PLAY LIKE A CHAMPION TODAY” embossed on dozens of items: T-shirts and towels, lanyards and license plates, magnets and mousepads, keychains and koozies. Hoodies, Frisbees, beer glasses, ball caps, coffee mugs, playing cards and, of course, exact replicas of the original sign in its original dimensions, four feet by three feet, all are available for purchase.

And who owns the trademark on that phrase and thus earns royalties on the sale of every item? Laurie Wenger and her husband Ron. “I couldn’t even imagine at the time that it would turn into a business,” she says.

It all began soon after Notre Dame hired Lou Holtz to replace Gerry Faust as football coach in November of 1985. Wenger, a South Bend native whose job was to paint signs for functions at what was then the Athletic and Convocation Center (ACC), was in the maintenance shop when linebackers coach George Stewart approached.

“This coach (Stewart) handed me a piece of paper,” she recalls. “He said that the new coach (Holtz) wanted a sign made with these words on it.”

According to Holtz, he had been foraging through books on Notre Dame’s storied past when he spotted the sign in a photo. The sign was posted at the bottom of the stairs that lead from the locker room to the tunnel inside Notre Dame Stadium. “I asked everybody, ‘Who took it down?’” Holtz has said. “Nobody remembered it even being up.”

Nor does anyone at Notre Dame even know which book Holtz might have been perusing. No matter. Wenger quickly set to work. Her maintenance shop co-workers sawed a piece of plywood, which she primed twice, each time waiting for the primer to dry overnight. Another day was spent painting the sign gold. Finally, she added the blue lettering in the signature ALL-CAPS style she had first adopted in high school commercial art class.

And that was that. Wenger, who was born blind in her right eye, returned to painting signs for athletic banquets, for graduation dinners for Junior Parents’ Weekend (“that was hell,” she says), etc. She even painted game balls, including one that was given to President Ronald Reagan during his 1988 campus visit.

“Laurie’s work is on display in the Ronald Reagan Library in California,” says Ron.

Then one day serendipity and opportunity crossed paths. In 1991 NBC mounted an unmanned camera at the top of the locker room steps to show the Irish players slapping the sign as they prepared to take the field. A few weeks later Ron Wenger received a phone call.

“This salesman at Coral Nissan Dodge wanted a replica of the sign for his house,” Ron recalls. “I think we charged him, like, $200.”

Ron delivered the sign to the Wenger’s first customer, a local who told him that he had actually been a walk-on football player for the Irish. “When I went down to his basement,” Ron says, “I had never seen so much Notre Dame memorabilia. He had a helmet, a jersey, even a church pew.”

“But he wasn’t ‘Rudy’ yet,” says Laurie. “This was a few years before the movie came out.”

At the time Laurie, Ron and Ron’s brother-in-law, Don Padgett, were scrambling for ways to augment their incomes. “I was a third-shift CT technician with days and weekends off,” says Ron. “We were shooting wedding videos and had a company called Lifetime Video Productions.”

It was Padgett who suggested they place an ad in the Notre Dame football weekly Blue & Gold Illustrated, marketing hand-painted replicas for $49.95. Chuck Lennon, the school’s vice president of University Relations and a popular figure on campus, ceded all licensing rights to the phrase to the Wengers since there is no direct mention of Notre Dame in the wording. Ron and Laurie then went about obtaining a trademark for it.

Soon, with the popularity of a football program that at the time perennially finished in the top 10 and the visibility afforded the sign by NBC’s cameras, Laurie Wenger was the most prolific painter since Picasso.

“That was the fall I never got to see daylight,” says Laurie, who would paint in her basement, of the autumn of ’91.

“We didn’t even put up a Christmas tree that year, we were so busy,” says Ron.

The following summer Ron and Laurie took their PLAY LIKE A CHAMPION TODAY (or, PLACT) idea to the old Hammes Notre Dame Bookstore on the South Quad. They received a polite rejection letter in return.

Still, the business grew. Orders kept filtering in via the magazine ad—to this day they still run an ad in Blue & Gold Illustrated—and the product line began to expand. When alumnus Regis Philbin, who had received a Wenger original as a gift for hosting the 1991 football banquet, appeared on The Apprentice, the contestants were shown slapping the sign as they left his office.

On New Year’s Day 2003, late in the 28-6 Gator Bowl blowout by North Carolina State, the announcers noted that Notre Dame had brought a PLAY LIKE A CHAMPION TODAY sign with them.

In truth Laurie, who was diagnosed with multiple sclerosis in 1995, only personally hand-painted approximately 600 signs before partnering with a local imaging company. Curiously enough that company, AP Image, is owned by Jim Humbert, a former Notre Dame football lineman and son-in-law of legendary Irish coach Ara Parseghian.

“People would ask, ‘How can you do all of those signs?’” Laurie says. “One letter at a time.”

The business evolved. Lifetime Video Productions became PLACT, which also happens to be the license plate number on the family SUV. The Notre Dame bookstore moved into its new digs under new ownership that welcomed PLACT products. Laurie and Ron entered into a licensing agreement with Notre Dame so that the revenue is no longer solely theirs.

“It’s better this way,” says Laurie, who continued to work full time at Notre Dame as its Joyce Center sign painter until retiring in May 2010. “We’ve met so many neat people and had so many great experiences because of those five words. We feel blessed.”

An example: When Rudy was being filmed in 1992, Laurie was called in to paint props. She painted the “Practice in Session” sign that appears on the fence outside Cartier Field as well as all the game balls that appear in coach Dan Devine’s office.

Another: When Tyrone Willingham was hired as Notre Dame’s coach in 2002, he could not wait to meet Laurie. “He already had a sign when we met,” Laurie says. “He wanted me to sign it so that he could hang it in his son’s bedroom.”

The Wengers are reticent to reveal the financial harvest that they’ve reaped through PLACT other than to say that they have sold “tens of thousands” of items bearing the phrase. Ron claims that more subway alums than actual alumni buy the products though, of course, subway alums also greatly outnumber Notre Dame graduates.

“I used to wonder when we first began advertising, ‘Who would want this?’” says Laurie. “Boy, did I find out.”

“Because it’s universal,” says Ron. “Everything I do at work, I do my best. Every time I slap that sign, that’s what I’m saying.”

“His job, your job, whatever you do,” says Laurie. “You do your best. Play like a champion today.”

Five years ago Laurie went in for a CT scan. Ron, who really does do his best at his job, administered the test. He knew, before the doctor even met with his wife, that Laurie had a brain tumor.

Fortunately, it was benign but in the past year Laurie needed to undergo brain surgery to have it removed. Between her advancing MS and the brain tumor surgery (Laurie has never been able to drive), the ancillary income from the PLACT proceeds has been a godsend.

“It’s allowed Laurie to retire and defrayed all the medical expenses,” says Ron. “Notre Dame has blessed us in so many ways.”

And what about the man whose request, made a quarter-century ago, inspired the company that led to the enriched lives of Laurie and Ron Wenger? “My nephew, Don’s son, Brian Padgett, took a sign to a luncheon where Lou Holtz was speaking to have him sign it,” says Ron. “Lou took one look at the sign and said, ‘I wish I had trademarked that.’”