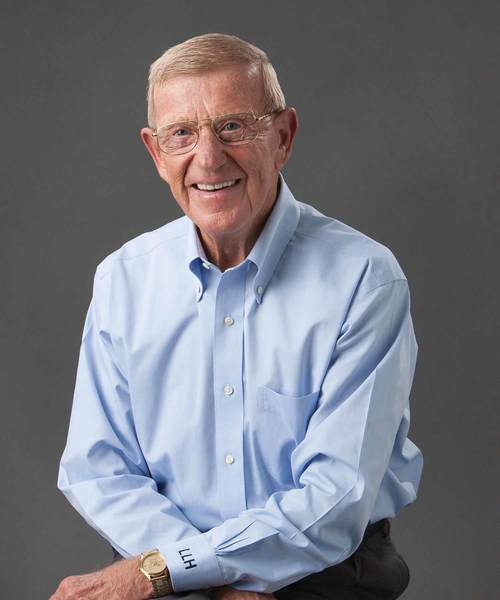 Just hours after the University of Notre Dame’s 1988 national championship football team was honored by president Ronald Reagan at the white house, Irish senior Bobby Satterfield died suddenly of a seizure and cardiac arrest back in South Bend.

“What mattered,” Holtz continued, “was that he was part of the team.”

The Hall of Fame coach who guided Notre Dame to a 100-30-2 record in 11 seasons retold this story in September at the Lou’s Lads Foundation’s annual dinner on campus.

Being part of a Notre Dame team coached by Holtz meant everything to the dozens of former players and student managers in the audience that evening. Just like it had for Satterfield who, for the record, was black, a defensive back, a third-stringer and a walk-on.

“And Coach still wants us to be part of a team—for us to stay in touch with him and with each other,” says Mark Monahan, an Irish defensive back in the early 1990s and now an emergency room physician in both Chicago and South Bend.

“And we also want to honor coach Holtz in the process,” adds Derrick Mayes, who once held the Notre Dame record for touchdown receptions while playing for Holtz.

Mayes is the director of Lou’s Lads executive board. Monahan is the president. Both are 41. They admit their group has a great example to follow in Leahy’s Lads, those who played for Irish legendary coach Frank Leahy and continued to stay close into their golden years while doing good deeds together.

“We thought this was the time in our lives that we should step up, too,” Monahan says.

And they have—funding scholarships for underprivileged students, getting involved in such national events as the Bread of Life Drive and giving back to their own communities in a variety of ways. In 2014 Lou’s Lads assisted Notre Dame alumni clubs in 35 local food drives across the country. The hundreds of thousands of food items collected were donated to food pantries and shelters.

Holtz not only has challenged his former players to help others, but he also has shown them the way. In 1998, he and his wife, Beth, started the Lou Holtz Charitable Foundation with much of its budget coming from the proceeds from three of the books he has written. The foundation’s mission is to promote education, religion and charity.

Holtz also serves as Lou’s Lads chairman. Yet he has made it clear from the beginning that he wants it to be player-driven.

“And you have exceeded my expectations,” he told many of his players back in September. “I can’t tell you how proud I am of all of you.”

Of course, he has always been proud of them—first as they worked as teammates on the football field and now as they work together and use their talents for the greater good of mankind.

“For me to be in the (College Football) Hall of Fame is all about what you did, not what I did,” he added.

And then later in his speech, he said, “Without a doubt, my greatest accomplishment is before me—Lou’s Lads.”

Yes, Holtz could be a taskmaster on the practice field and during games. Nobody knows that more than he does himself.

“I treated you the same as I did my four children—with a little bit of impatience at times.”

But most of them learned to listen to his words and ignore the decibels in which they were sometimes said.

“He wasn’t necessarily a friend to his players back then,” says Holtz’s son-in-law, Mike Messaglia, a former Notre Dame swimmer and an Indianapolis attorney.

“And maybe they didn’t always know the value of the lessons at the time. But those lessons proved to be so consistent and stayed with them over the years. I’m sure many of his players now use them in both their professional and personal lives.”

“Coach Holtz may say that the best use for his sculpture (dedicated in 2008 outside the Notre Dane Stadium) is for a place where pigeons can roost,” says Tom Galloway, a linebacker who played on Holtz’s first Irish team in 1986, “but it’s the words at the bottom of the sculpture that tell his real story: Trust, Love, Commitment.”

His former players seem to love and respect him even more as the years go by.

“The older I get, the more I reflect on my formative years and think of what propelled me into the older version of myself,” Monahan says. “The more that happens, the more I appreciate everything coach Holtz did for me—on and off the field. The maturity and work ethic that was first instilled by my family was hardened, matured and truly tested during my college years. I owe who I am today to coach Holtz.”

Those are the kinds of feelings that helped bring about Lou’s Lads.

“We wish to continue to grow as an organization—and as a vehicle to uphold the morals, ethos, energy and spunk of coach Holtz’s legacy on us,” Monahan continues.

“But I still have 20-20 vision with my glasses, I’m still energetic and my mind seems to be all there,” he says.

He uses his vitality to raise money for both Lou’s Lads and his Lou Holtz Charitable Foundation. Some of his special interests are connected to Notre Dame, the Congregation of Holy Cross, his alma mater, Kent State, and Catholic Charities.

“Growing up at the end of the Depression and sometimes having a tough childhood, Lou feels so fortunate in what he has accomplished in life,” adds Messaglia. “So he wants to give back to others in any way he can.”

Holtz traveled to Afghanistan two years ago to be with the troops because he felt his own Army experience did wonders for him. While he talked to young soldiers, he asked them the same questions he also asks his former players: “What do you need? What can I do for you?”

Some wanted him to contact their parents and he did.

“And when he finds out that somebody is having a rough time, he may write them a letter or give them a call,” Messaglia says. “He does all this without fanfare.”

Another example of his generosity stems from the Type 1 diabetes that his son Kevin has battled since he was a youngster. When a new insulin pump was developed to control the insulin flow better than a shot would before meals, the Holtz foundation helped finance these pumps for other diabetics.

Holtz also continues to be a presence in his hometown of East Liverpool, Ohio. The townsfolk wanted to set up a Lou Holtz museum, displaying all of his memorabilia and awards after he retired from Notre Dame in 1996.

“But he declined unless we would honor other people from our area who have excelled in such fields as medicine, industry, religion and entertainment,” says Frank “Digger” Dawson, a funeral director in East Liverpool and a longtime civic activist. “It would need to be a hall of fame as well as a museum for him to be on board.”

It sounded like a great idea, so Dawson and some members of the high school football team were given the OK to drive five vans and a pickup truck over to South Bend and gather up Holtz’s hardware.

The Lou Holtz/Upper Ohio Valley Hall of Fame became a reality in 1998 in an old three-story bank building built in 1925.

“We’ve been going at it now for 17 years and we’ve just about run out of room with the growing displays we create for each inductee,” Dawson admits.

Holtz comes in for all the yearly induction ceremonies, usually plays golf and enjoys reconnecting with old friends. He also gives several thousand dollars from his foundation each year to fund vocational scholarships for area workers and grants for local teachers.

“His foundation usually gives us at least $20,000 and as much as $40,000 a year to keep the Hall of Fame and the building going,” says Dawson, who serves as the president of the Hall.

The foundation also has hosted fundraisers such as golf events and a 5K race. Some of the companies that hire Holtz for motivational speeches will also make contributions.

Holtz sometimes can seem like a one-man army but team efforts are what he cherishes the most. Lou’s Lads—his Notre Dame players—may be his best example.

“I don’t want you to be content with who you are or what you have accomplished,” he tells them.

After all, he never has.