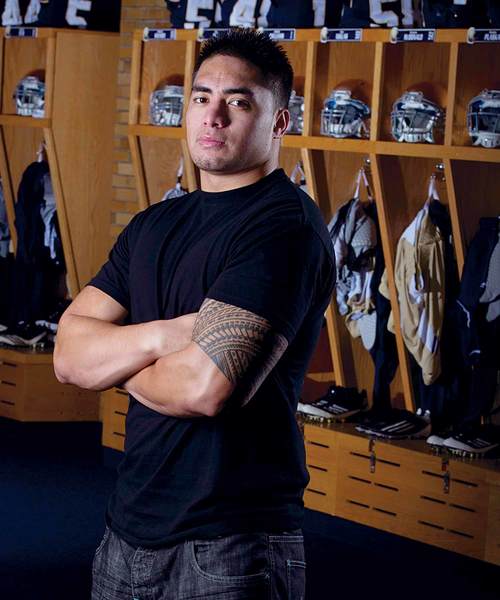 Ask Notre Dame linebacker Manti Te’o to tell you one thing about himself that would surprise most people and he will do as he always does—pause, think, ponder and try to come up with the best answer.

Spend any amount of time around Te’o and you will not be surprised to find out he is an Eagle Scout.

He is, by any measure, a remarkable young man who would be an asset to the University of Notre Dame even if he were not a terrific football player. The fact that he is one of the best defensive players in the country is how most Irish fans view him, but the Te’o you see on the field is unlike the Te’o who paused, thought and pondered before he traveled thousands of miles and navigated several layers of cultural changes to come to South Bend.

Nearly everyone who has vacationed in Hawaii returns home—especially to a home that actually has a winter—with vivid memories of that paradise-like place. To some degree that is true but, like most places in America, a one-size-fits-all description will not suffice.

Manti Malietau Louis Te’o was born and raised in the town of Laie on the island of Oahu, and Laie has a most interesting history. Until the mid-1800s Hawaii was ruled by local feudal lords or kings and one dared not set foot in another kingdom. Except that was not the case in Laie which became known as a safe-haven for fugitives, not the kind who escaped from prison but men who were trying to get away from a repressive despot who ruled his fiefdom with an iron fist. Laie was known as a sanctuary.

Fast-forward a century-and-a-half, and Laie remained a sanctuary for its proud citizens, especially the children. Not unlike a town of 4,500 somewhere in Indiana, everyone knows everyone in Laie, and they all look out for their neighbors.

That is what it was like for Te’o growing up with five younger siblings and his dad, Brian, and mother, Otilla. Except it was not paradise. The eight of them lived in a small house and slept in three bedrooms, which by most standards of living in America would be considered poor. But poor is something they never thought about even if there were times when they could have felt sorry for themselves.

All of us probably can remember something negative in our childhood that we carried with us into adulthood. Te’o can recall one incident as if it occurred yesterday but, as with everything in his life, he turned the negative into a positive. Power blackouts are not unusual in Hawaii, but one night when the power went out Te’o looked outside and noticed the lights were on at all the other homes and he knew right away what had happened. The power company cut off the Te’os’ electricity because the bill had not been paid.

Manti’s biggest concern was for his younger brothers and sisters and what he should say to them. In Hawaiian culture, the oldest child accepts a large responsibility for the younger ones, and Te’o did not want any of them to think poorly of their parents. He didn’t have to, because the other Te’o children thought what happened was a delightful change from the daily routine—the six of them ended up playing games for hours using candlelight and flashlights. They still talk about it today as if they wish it had happened more often, it was so much fun.

There is something else gained from Hawaii’s diverse culture that serves its people well. The population comes from so many different lineages and from so many different places historically that prejudice is nearly non-existent. People are people, Te’o puts it simply, and must all be treated as God’s children. When you tie in his background to the tenets of his Mormon faith you get a much clearer picture of who Manti Te’o is as a human being. It is all about treating others as equals, respecting your elders and keeping in mind that at any given moment there could be someone around you who just needs another person to say a kind word or lend a hand.

“Elders” may be the one word that sums up Te’o’s beliefs more than any other. Both his church and his upbringing in Hawaii place a huge amount of responsibility on young people to pay respect in word and deed to those who are older and supposedly wiser. It could be something as simple as opening a door for someone or saying “Excuse Me,” when you pass in front of another person.

In most homes in Hawaii it is the children who gladly do the little things, like setting the table for dinner or getting the patio ready for family gatherings that often include extended “family” of just neighbors. It was probably that intrinsic elder philosophy so fundamental to Te’o that made it very difficult for his coaches at Notre Dame to convince him to take a leadership role when he was a sophomore. To him that is an honor that should be bestowed on those in the junior, and especially the senior, classes. He has, now a year older, accepted the requested responsibility.

Even at such a young age Te’o is well aware that life is short and for some life is cut short. He still questions himself if there was anything he could have done that might have prevented a 17-year-old cousin from committing suicide. “What if I had called him the night before,” he asks himself. What if he had sensed something was wrong and had gone to his cousin to share a few words or a hug and a smile?

Life is full of “what-ifs”—and sometimes there is no answer and no way of making the ultimate difference.

When tragedy struck the Notre Dame football practice field in October 2010 it was Manti Te’o who charged through the crumpled fencing, rushed to the side of student cameraman Declan Sullivan, knelt at his side, touched him, talked to him and said a prayer.

It was Manti Te’o who, several days later, volunteered to go to the funeral because there was something he just had to do. Even though he had been on campus less than two years, the Notre Dame family had become part of his family. Manti knew that Declan had a sister who was also a student at Notre Dame—and he just wanted to let her know that with her brother gone she could count on him for anything she needed to try to move on with her life.

Clearly Te’o, especially for someone so young, has a life in balance and that includes his bright future in football as a profession. In addition to being named a second-team Academic All-American in 2011, Te’o became a finalist for both the Butkus Award (it goes to the best linebacker in the country) and for the Lott IMPACT Trophy that honors a player for his work on and off the field.

I ask him if he would be devastated if he were to be injured and his goal line in life suddenly erased. This time he does not have to think about the answer and quickly says “yes.” But when he goes on, that is when you realize you are talking to a special person. For Te’o, the prospect, the dream of playing professional football is but a means to a far greater purpose. To him it would be a vehicle to transport him to the rest of his life, take him back to Hawaii to do good for the generations that will follow and to take care of the family that has wrapped its arms around him with love and encouragement.

After all, he says, football is a game, life is not.

Still, there are some who wonder about this young man who does not fit the standard profile of a student-athlete at Notre Dame. What about the fact that he is a devout Mormon on a campus of mostly devout Catholics? This challenge, too, has turned into a building block of life, he says. The spirituality he has witnessed at Notre Dame has only enhanced his life and made him even more of a spiritual person. The Notre Dame family has embraced him and he returns the love any way he can.

He learns the names of employees he meets across the campus. If they want to chat with him about football that is fine by him, but he will want to know how they are doing and how their families are doing.

Children flock to him like bees to honey, which is not surprising because he is easily recognizable and still has a lot of that kid from Hawaii in his persona.

Still, the interviewer has one question left in his notebook, the one that will throw the young man off balance, make him ponder and finally say something negative about this phase of his life.

So, Manti, what about the weather in South Bend? At this point I should not have been surprised when he says he had not only gotten used to it and accepted it, he believes even bad weather is part of what makes for a better life, even one seemingly in balance.