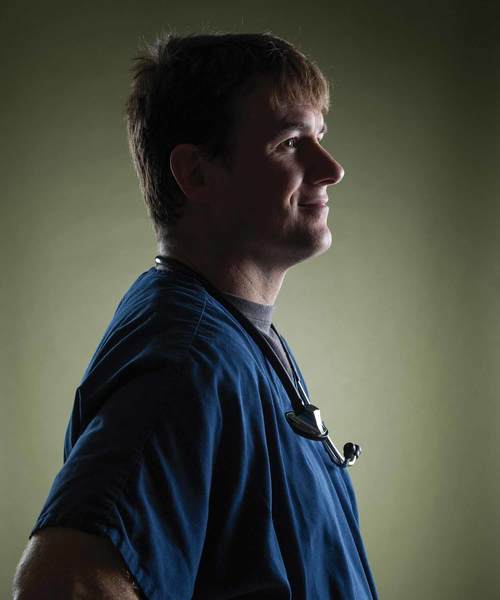 He stars in ER

Tradition is sacred to the Monahan family of Arcola, Illinois, a farm-surrounded town of some 3,000 residents located in the central part of the state, roughly 32 miles south of Champaign.

Nowhere does that sense of tradition manifest itself more strongly than in the Monahans’ allegiance to Notre Dame.

Tom Monahan played football for Knute Rockne before graduating in 1932. He would regale family members with stories of hauling bricks to the Notre Dame Stadium construction site as the “House that Rockne Built” took shape on campus.

Tom’s sons Tim (a 1961 Notre Dame graduate), Pat (’62), Joe (’64) and Jim (’67) followed him to South Bend, as did 17 of their combined offspring. Another five Monahan women attended Saint Mary’s College. In fact, the Monahans were a continuous presence on the Notre Dame campus for 28 years, from 1982 to 2010. Monahan-mania hit its peak during the 1994–95 school year, when eight of Tom’s grandchildren were enrolled.

Tim Monahan’s sixth son, Mark, was one of them. A standout athlete at Arcola High School, Mark Monahan rejected scholarship offers from several other colleges to follow brothers Tom (a 1987 graduate), Jon (’90), Patrick (’91) and Chris (’95) to Notre Dame. As oldest brother Tom had done, he walked on to the football team, progressed from the scout team to the traveling squad, earned a scholarship from Lou Holtz for his senior year and saw enough playing time as a defensive back to earn two monograms and Academic All-America recognition before graduating in 1996.

Tradition might have suggested he enter the family’s broomcorn-processing business in Arcola, but Monahan had other ideas. He had the grades, the ambition and the curiosity to try something different, something that would align with a lifelong desire to help people. He was accepted into one of the most prestigious medical schools in the nation, at the University of Chicago.

“I always understood math and I got pretty good grades in science, so I thought I’d give it a shot,” Monahan said nonchalantly, as if that were all it took.

“We lived in a farm town. I’d never even been to the hospital as a kid.”

His medical preparation wasn’t limited to classroom studies. One of Monahan’s uncles was a doctor practicing in New Orleans, and during a family visit he took Monahan on a tour of the notoriously active emergency room at New Orleans Charity Hospital, one of the nation’s busiest until flood damage from Hurricane Katrina forced it to close in 2005. The human suffering Monahan witnessed, along with heroic attempts to alleviate it, made a lasting impression.

So did his rotations in emergency care at the University of Illinois-Chicago Medical Center, on Chicago’s West Side, where the action is chronically non-stop.

As Monahan neared completion of his UIC residency, Memorial Hospital of South Bend was seeking physicians to cover an ambitious expansion of its Leighton Emergency facility into a Level II trauma center capable of serving the entire northeastern Indiana region. Monahan signed on, and recently celebrated his 10-year anniversary as a specialist in emergency medicine, treating everything from mild stomach aches to grisly gunshot wounds.

“I’m kind of an adrenaline junkie, so this is a good fit for me,” he said.

“We’re not always crazy busy, but when we’re going, we go pretty good. We probably see about 160 patients a day, more on weekends or when the weather is warm.”

Monahan leads a tour of the 31-bed facility as a proud buyer might show off a new home. There is no shortage of Notre Dame graduates among the staff, he notes, including fellow physicians Russell Farrell, a 1972 graduate, and Mark Walsh (’69), a renowned emergency-care expert and lecturer who is also the hospital’s director of medical education.

There is nothing ambiguous about their purpose: They’re in the business of saving lives.

“If you want to see a real slice of life, spend some time in an emergency room,” Monahan said.

“One thing I like about the work is we don’t ask if the patients are insured or if they can afford it—we’ll see them no matter what. We’ll treat them and get them what they need.”

Some patients obviously require more care than others, and some show up in the emergency room simply because they don’t know where else to go for their sprained ankles or stomach aches. Priorities are determined by the urgency of need. But no one is ignored.

“People come to the ER for the strangest reasons, but an emergency is defined by what someone thinks it is,” Monahan said.

“Who am I to judge? I try to educate and reassure people, as well as treat them.”

Often under the most stressful, difficult circumstances imaginable. Bedside manner matters almost as much as medical knowledge or treatment skills in an emergency room.

“You have about five minutes to gain a family’s trust and assure them that everything that can be done will be done,” Monahan said.

“I come from a big family in a small town. I guess I have the personality for it.”

Monahan thought he knew pressure playing top-level college football before rabid, packed houses on fall Saturday afternoons. The split-second decisions he made from his safety position could have game-turning consequences—Monahan helped secure a 35-28 victory over Purdue with a last-minute interception in 1995, his senior season. Later that year he was credited with six tackles in a 38-10 drubbing of fifth-ranked USC.

The decisions he makes in the emergency room involve incalculably higher stakes.

“You’ve got to have ice-cold blood,”

he said, “and be ready for anything.”

Yet there are no guarantees of a good outcome, even when every decision made is the right one. Monahan’s perennially cheerful expression clouded over as he recalled a 76-year- old gentleman who arrived in the ER with his chest crushed and his ribs broken from a car accident.

“He was awake and talking when they brought him in, but at his age, there was no way his lungs could survive trauma like that,” Monahan said.

“We tried to make him as comfortable as possible, and we notified his family that they’d better get over here if they wanted to see him.”

The man died the next day. Monahan and his colleagues couldn’t let their sadness linger. There were other patients to treat, other lives to save. There always are.

Monahan keeps a small apartment in South Bend for those nights when his hectic schedule demands a quick turnaround, but home is in the Chicago suburb of Western Springs, where he and his wife, Tricia, are raising their four children. It’s a busy life, though Monahan tries to fit in enough pick-up basketball to remain in the vicinity of his 190-pound playing weight at Notre Dame. He recently turned 40, but he still has the tousled red hair and fresh-faced, Irish-influenced looks of a Notre Dame undergrad.

Tricia, a Saint Mary’s alumnus, has taught in Catholic grammar schools and is one of the leading instructors with the acclaimed Trinity Irish Dancers. She performed with the troupe for several years, her appearances including two movie roles. Daughter Flynn, 10, is a promising dancer in her own right. Sons Duffy, 7, Cormac, 5, and Dermot, 3, are already showing signs of emulating their father’s energy and exuberance.

It’s fine with their dad if any or all of the kids want to continue the Notre Dame tradition.

“The things I was able to do there, the people I met, the friends I made—Notre Dame was a great life experience for me,” Monahan said.

The Irish were 36-10-2 during Monahan’s four seasons in the football program, including 2-2 in bowl games. A victory over Florida State in the 1993 “game of the century” is one of his fondest memories, along with his game-sealing interception against Purdue two years later. He enjoyed his time under Holtz and was especially fond of Charlie Strong, a former Holtz assistant who has taken over as head coach at Texas after tours as defensive coordinator at two-time national champion Florida and head coach at Louisville.

“I have nothing but good things to say about Charlie Strong—he’s a good man,” Monahan said.

He stays connected with the University by serving as president of “Lou’s Lads,” a fraternity of Holtz’s former players who are committed to keeping the coach’s legacy alive through charity work. Patterned after the activist group of “Leahy’s Lads,” who played for Frank Leahy, Lou’s Lads raise money to provide scholarships for disadvantaged students and support for the families of deceased former teammates, including the three children of Mirko Jurkovic, an All-America guard for the Irish in 1991 who died of colon cancer last year at age 42.

A summer golf outing and a reunion weekend during football season are among the group’s headline activities. A flag football game played in conjunction with the Blue-Gold final spring game turned out to be the last event to take place on the hallowed grass playing surface at Notre Dame Stadium.

FieldTurf was installed before the 2014 football season.

As a medical man, Monahan has an informed view of the concussion controversy that is prominent throughout football and is a contributing factor to the decline in participation at youth levels. Monahan and Tricia will have a decision to make when their three sons are of football-playing age, but as of now he is anything but ambivalent on the topic.

“I think sometimes we’re a little too scared of everything that’s going on in the world. Where else are kids going to learn what they can learn through sports? The competition, the cooperation, the camaraderie...I know what it meant to me.