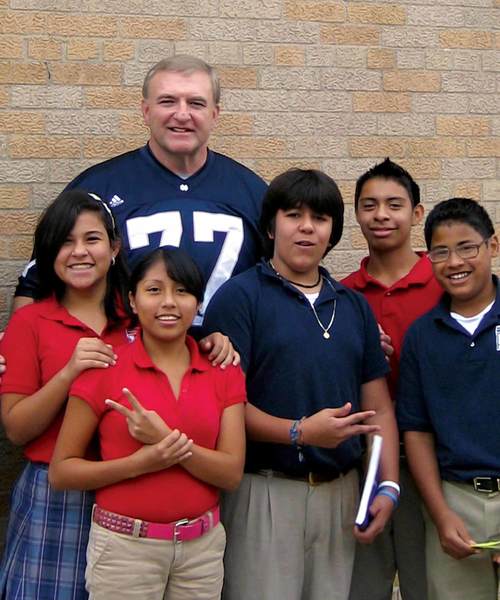 His passion is empowering youth

Motivational speakers are a dime a dozen. Many of them will charge a lot of money to tell you how you can make a lot of money, which, of course, you probably never will.

That is one reason, though not the main reason, why former University of Notre Dame football great Mike McCoy does not call himself a motivational speaker. He likes to think of himself as a “life changer” and he doesn’t charge a dime to do his thing.

McCoy is still an imposing looking fellow all these years later, though his days of chasing down USC quarterbacks and fast runners in the National Football League are long gone—his knees being pretty well shot. Still, hanging out with him in the days leading up to the Notre Dame–Navy game in Dublin, Ireland, it was easy to see why people listen when Mike McCoy talks. He has that certain something within him that just resonates with others.

McCoy was in Dublin as an honorary captain for Global Football, which was putting on a series of high school and college football double-headers leading up to the big college game. Most honorary chair people show up, eat the free meals, take the stipend money and go home. That approach is not what makes Mike McCoy the man he is today. He did it for free as a favor to his longtime friend and former Irish quarterback, Pat Steenberge, who runs Global Football, and because there is nothing that means more to Mike—other than his family—than the well-being of young people and the well-being of their souls. It was something to see because most high school kids aren’t about to take to heart the words of someone who is several generations older and especially someone they are meeting for the first time.

So, that is where that “certain something” apparently came into play with those young people in Ireland. They listened, they asked questions and they seemed to bond with the big guy whose athletic glory days are far in the rearview mirror. Mike McCoy, it would seem, discovered a long time ago something that many ex-jocks never are able to grasp: Football is a game, life is not.

McCoy grew up very Catholic and very blue collar in Erie, Pa. There was his mom and his hard-working dad who busted his tail for very little and had a few beers after work—and then there was the Church and school with the priests and nuns telling you what to do, and even more so, what you shouldn’t do. There was also the football coach at Erie Prep, Tony Zambroski, who became a father figure and someone Mike still adores. You get the picture?

Then Mike came to Notre Dame to play football for Ara Parseghian, and, yes, to go to classes, too. And how he played football! Back then he was already a big boy who was blessed with speed and a terrifying presence for his opponents. But he was still that kid from Erie who was still in that Catholic family bubble. The newfound freedom of being several hundred miles away at an all-male college was sometimes too much for him to handle. As he told me, he “strayed” a little from that bubble and even questioned if he fit in at a place where blue-collar background students were becoming fewer and fewer. But he was (literally) a big man on campus, slowing awakening to where he was and what Notre Dame could do for him. He made friends he has today, and Notre Dame became a place that, as he puts it, opened his heart. A pattern developed in his life here that not only continues today but also means more than any football trophy. McCoy, who spent a year in seminary before moving on to Erie Prep, was deeply concerned that he might be becoming a closet Catholic, one who goes to church, says all the right things but is somehow doing it out of guilt or superstition. He thought he wasn’t worthy of God’s love or as he puts it, what the Grotto represented. But even if he was just going through the motions, Mike never questioned his beliefs and never questioned his faith, or so he thought.

If McCoy was going to stray, the perfect scenario was right in front of him when he became the second pick in the NFL draft (behind some guy named Terry Bradshaw) by the Green Bay Packers. While not the contracts of today, McCoy now had more money in his pocket than his family had ever seen and more opportunities to enjoy the over-the-top good life. But, as Mike says, you never know when God will intervene; he ended up in the good crowd when he joined the NFL Chapel Program in Green Bay, which happened to be led by two of the all-time greats, Bart Starr and Carroll Dale. This program became his outlet away from the playing field and allowed him to become, in his words, “a man of God, committed seven days a week, not just on Sundays.” There was, he now felt, a depth to his life and he would no longer question his faith. And he hasn’t done so since.

So fast-forward from those halcyon days of football glory for Michael McCoy who earned every one of the awards and trophies, one of the best in college, one of the best in the NFL, because, as he reminds all the people he touches, there is nothing we can do about yesterday because tomorrow becomes today quickly.

And today, there is Mike McCoy Ministries. He has thrown himself into this venture just like he threw his body into harm’s way on the gridiron. For the most part, he speaks at Catholic schools, avoiding boring stories about his own days at the Catholic schools in the Catholic atmosphere of Erie, Pa., because he is certain that kids today face formidable obstacles more difficult, more daunting than he ever did because of the cultural challenges of today’s society. He even tells them that he would probably bend to that culture himself.

He talks to these youngsters in a way that is not “in your face,” but he will not compromise his beliefs. “Take it or leave it,” he says, “Accept grace in your heart because if you can’t just have God on the outside, that special spirituality has to be on the inside if it is going to make a difference in your life.” McCoy comes into every classroom with a list of Proverbs for the students to read, if they want to. There is no demand, he simply lays it out, and if even a few walk away with some newfound inspiration, it was worth the effort.

There is another side to McCoy’s efforts to bringing a message of hope to his fellow human beings. He goes to prisons. That choice would appear on the surface to have the success rate of a Hail Mary pass from your own 10-yard line—but to Mike it is an easier playing field because he says these are often broken people who want to be forgiven in their souls.Even behind walls and barbed wire people feel the need to somehow start over and renew hope.

From someone else, all of this could add up to no more than Irish blarney, but from McCoy, who wears his heart on his sleeve, it does work. He has received letters from some of those schools telling him about students who came up to their teacher afterwards and finally had the courage to open up about things that had been haunting them, a few even sharing the very worst there could be, a suicidal tendency. Is there any moment in life more fulfilling than knowing you may have saved a young life?

As Steenberge says, this is a guy who makes a difference because there is nothing phony about him.

You can be an All-American, you can be an All-Pro, but very few of us are at total peace with ourselves like Mike McCoy, a real life-changer in a very special hall of fame.