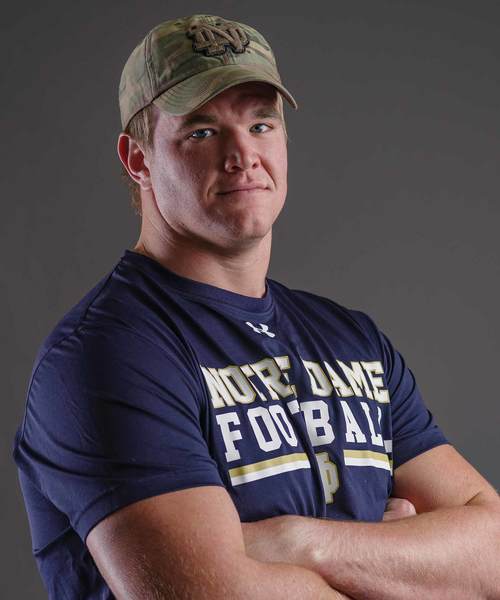 Alongside Jim and Dan

Tailgate parties are rather a big deal for the McGlinchey clan.

With a half-dozen related families all living within a stone’s throw of each other in the Philadelphia area, there’s generally no shortage of support when offensive tackle Mike McGlinchey suits up to play football for the University of Notre Dame.

There can be, literally, dozens of cousins, aunts and uncles in the mix from week to week, not to mention McGlinchey’s immediate family.

“My family generally comes in shifts,” says Mike. “Both my parents have been here at Notre Dame at once only a few times (Mike’s mother, Janet, says that was when they initially brought Mike to campus and Junior Parents Weekend) because I’ve got so many other brothers and sisters and they’ve always got things going on. If they both see a game at the same time it’s when we play on the East Coast.”

Check in with the McGlinchey crowd on a game weekend and you are likely to find many other Irish offensive linemen and McGlinchey roommates Durham Smythe, Mark Harrell, Jake Matuska and Jesse Bongiovi.

And right in the middle of it all are probably Jim McGlinchey and Dan McCain.

Jim McGlinchey, Mike’s younger brother, was diagnosed with autism when he was nearly two years old.

“He’s the fifth of our six kids,” says Mike. “My mom was a school teacher when I was growing up. She stopped when she had four of us—but when Jim was born he wasn’t doing things my mom had already seen in her other four kids. She kind of knew something was off and that enabled her to get him into early intervention that has really helped out along the way.”

That also converted Janet McGlinchey’s career path into special education—so she could help families in the same situation as the McGlincheys.

“Jim has been a huge blessing in our family,” says Mike. “It teaches us how to live life every day, and it’s been a special thing in our lives.

“Jim just turned 13 in July, so he’s in eighth grade this year. He gets into it—he likes to come out just because everybody else comes out. He’s not as much into football—he just enjoys hanging out with everybody. My buddies all love him when he hangs out with us.

“Jim’s a funny guy—he got first honors in his seventh-grade class. Out of 300 in his class he was one of 20 to get a special award because of his grades. His social cues are a little off—he just operates a little differently. You have to unlock his mind in some ways in terms of his talents.

“Jim has been an unbelievable artist since he first picked up a pen. He’s the smartest kid you’ll ever meet. He just has a cool, different way of communicating things.”

Adds Janet: “Jim does best with the spring (football) game because it’s not as crowded—he brings an iPad or some device to help him get through the game. As long as we stay at a hotel with a pool—that way if we make it through the game we can go back and swim.”

If Jim is a little more laid back about the football part of the equation, Dan makes up for that with his passion.

“My cousin Dan is a football junkie. He’s the one that’s the big fan,” says Mike. “He’s the guy who gives me the riot act on the phone when I call him on Sundays after games. He gives me the rundown on how he thinks I played.

“Dan’s about four years older than I am, and we grew up about a minute and a half from each other. We were at each other’s house every single day, growing up and playing games.

“He had a physical disability because he was born with a heart and lung defect that inhibited his growth as a human being. Doctors were saying he wasn’t going to live past 5 and then 10 and then 15 and now he’s 25 and he’s kicking life’s (butt). He’s the best. He’s a gift in our family.”

According to Janet, Dan was born with a lung disorder with arteriovenous malformations (AVMs)—minute holes in his lungs where he was leaking oxygen.

“He spent a big chunk of his toddler and youth years sleeping with oxygen and going through tons of testing,” she says. “Once he reached puberty the AVMs were smothered, but in the long run—because of being on the oxygen all that time—his other organs paid a price. He ended up having his aorta replaced about eight years ago. It was traumatic for the boys in that age group because there are maybe seven or eight boys in our family and my two sisters’ families. They are just months apart in age and they did everything together.”

“Dan’s crazy,” says Mike. “He comes out to every game at Notre Dame. I don’t think he’s missed one since I started playing. He’s my best friend. I couldn’t imagine doing anything without Dan. I call him every other day and get his rundown on what he’s doing and what he’s thinking about our team.

“He gets more nervous for football games than I do. Last year, the week of the Clemson game, he did not speak to his mom for a week because he was so nervous about us going down to Death Valley.

“He’s nuts about football and he fuels our fire, all of us who have played in college. He did the same thing when (Mike McGlinchey’s cousin) Matt (Ryan) was at Boston College. My roommates all know Dan—we’ve all been together so much. They all have his phone number and they all talk to him. He calls them as much as he calls me.”

Adds Janet, “All Mike’s friends treat him like he’s an O-lineman like the rest of them. He tends to get himself in a tizzy. The boys have told him he can’t make predictions because a lot of them end up not coming true. Dan predicted Jordan Spieth would win the (2016) Masters and that Steph Curry and the (NBA Golden State) Warriors would win (the 2016 NBA title). They call it the ‘Dan Curse.’ They don’t want Dan making any more predictions because stuff happens. But he doesn’t miss a trick.”

When the other boys joined youth sports teams, if Dan couldn’t participate (like tackle football) he became the manager or some other part of the team.

“Dan never felt any different,” says Janet. “He always felt like he could snuff out the tallest player even when he didn’t have the strength to blow a feather. He knows more statistics than anyone, and he’s not shy about telling the boys what they should be doing. He’s usually the first one in the car for the Notre Dame games.

“He doesn’t let this hold him back, even though there were times when he wasn’t allowed to fly because of the oxygen levels. He does his six-month visits to the cardiologist and the pulmonologist. A couple of years ago his retinas were detached. He had surgery and did regain some of his vision. He reads Twitter better than all the rest of us.

“He doesn’t let any limitations bother him. Long term he’ll probably need another replacement of the (heart) valve. But he gives the other kids a different perspective on a lot of things.”

Ask Janet about her schedule, and that prompts a lengthy dissertation:

“This year, three more are playing football. Mike’s brother started college this year and plays for Franklin & Marshall. My daughter is a senior (in high school) and plays soccer and we have a freshman in high school for Charter. Then there’s Jim and then the youngest is playing CYO football.

“My sister above me also has five boys—two in college playing football, one is at Sacred Heart, one in CYO football. Between the two of us, with 11 kids, we somehow get the job done.

“My dad has 23 grandchildren, and I think we’re up to 13 great-grandchildren. We put together a football grid—from CYO up to the Falcons so my dad can figure out who is playing who and where every weekend.”

The McGlincheys generally squeeze about a half-dozen people in their van on the way to South Bend. They drive close to Pittsburgh on Thursday night and then arrive on campus early Friday. The kids participate in the pep rally, they visit the players at the team hotel and then crash until game time.

“We feel blessed that Mike is there,” says Janet. “I’m not sure any of my other kids will grow that big and have that opportunity. So we all are embracing it while Mike is there—it’s a special place.

“Dan hangs out with Mike and his friends. The whole Notre Dame family makes you feel like it’s no big deal—at the tailgate, in the stadium. Everyone makes them feel welcome and that they are no different—that’s awesome for us.”

When Notre Dame played Syracuse in October at MetLife Stadium in the New Jersey Meadowlands, the Bleacher Report staff covering the Irish arranged for Jim to attend the game and surprise Mike. That made for an emotional postgame scene after Janet and Jim sat in the first row behind the Notre Dame bench.

“Jim and Dan have made everybody better people,” says Janet.

“They see their shortcomings and they realize it really doesn’t matter.”