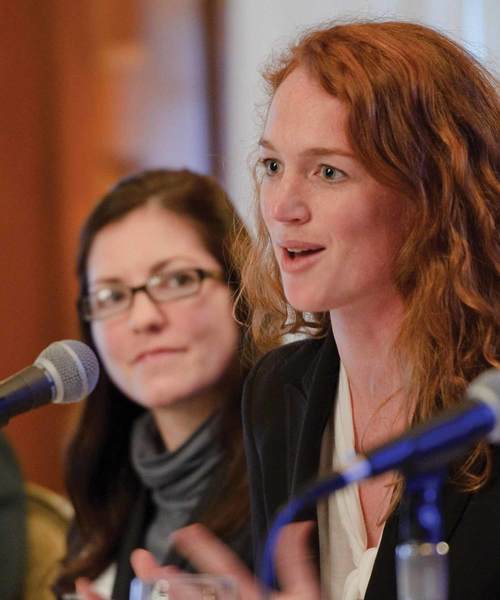 From the Irish Guard to a World of Good

One thing about Molly Kinder, she stands out in a crowd.

It’s not just the way she looks, although being a 6-foot-3 redhead, she’s hard to miss. It’s more than that—she’s the type of person who works a room without even trying, commands attention without craving it. Just a few minutes in her presence and you know she has “it,” that indefinable quality that tells you she’s a force to be reckoned with, someone who makes things happen.

And she certainly has been making things happen.

Since graduating from the University of Notre Dame, Kinder has gone to Harvard for graduate school, served as a Jesuit volunteer, co-authored a best-selling book on global health, consulted on policy and finance for the Bill and Melinda Gates Foundation, held positions with the World Bank in India and Pakistan, worked for the Liberian government, served as deputy chair of the Clinton Global Initiative, and held a post in the President Barack Obama administration as director of special programs for Development Innovation Ventures at the U.S. Agency for International Development (USAID), before settling in to her current position as director for agriculture and Europe policy at the international anti-poverty advocacy organization ONE.

For many, that list would represent the culmination of a lifelong career. What makes it all the more impressive is that the 2001 alumna did it all in time to be named to the Diplomatic Courier’s list of “Top 99 Under 33” in foreign policy this year, just weeks before her 33rd birthday.

Although clearly driven and focused, she says she’s never had a road map for her career. She’s just been doing what comes naturally.

“I can’t imagine not doing what I do,” she says with a laugh. “It just feels like who I am.”

Being herself has frequently landed Kinder in the middle of the action, and in the spotlight. Her poise, determination, and yes, her height, all came into play during her senior year when she shattered the glass ceiling of one of Notre Dame’s most revered and highly visible traditions by becoming the first female member of the Irish Guard in its 50-plus-year history.

No doubt the Guard’s requirement that members must stand at least 6-foot-2 ruled out many would-be guardswomen through the years, but height alone is not enough to make the cut for this highly selective group. To land one of the 10 spots on the Guard, you’ve got to be strong of heart, mind and body, and possess enough physical coordination to clog to “Damsha Bua” while wearing the uniform, complete with the signature “shako” hat that adds just enough inches to bring each towering figure to right around the seven-foot mark.

While Kinder certainly had a legion of supporters, not everyone was so quick to celebrate this particular manifestation of co-education. Even though there were some who were slow to embrace the “changing of the guard,” she persevered, and paved the way for other women who have since followed in her high-stepping footprints. In the process, she also pushed her own personal boundaries.

“The Irish Guard experience was just such an intense one, and one that really tested me in a lot of ways,” she says. “It was very confidence-building and I’m sure I probably wouldn’t have been as gutsy in my career if I hadn’t been through something that challenging and that formative at an early age.

“A lot of things I’ve done in my career have required me to put myself in certain situations,” she says. “For example, going to a foreign country, which might have made me nervous when I first got there; or going on CNN for an interview when I’d never done that before; or shooting for positions that were really senior and required me to sort of believe in myself and be a bit courageous. The Irish Guard experience has really helped in the sense of leadership and bravery.”

Kinder also credits her undergraduate years with introducing her to the field that would become her life’s passion.

“Notre Dame is where I discovered the issues that I work on,” she says. “I hadn’t heard of anything I do now until I studied it at Notre Dame. That’s when I took classes in political science and my senior seminar in international development, which was what convinced me this was what I wanted to do.”

Of her many adventures, she counts her work with the Liberian government among her most memorable. Serving under President Ellen Johnson Sirleaf, the 2011 Nobel Peace Laureate and first democratically elected female president in Africa, Kinder had the opportunity to learn firsthand from a leader she describes as “a hero.”

“I had the chance to work in her government and go to cabinet meetings and be a bit of a fly on the wall, only a few years after their civil war, to see how their government was turning around this country, which was by far one of the poorest in the world,” she says. “And I got to contribute in small ways, and in some ways that were quite exciting as I was working in the finance ministry. So that was unbelievable for me and such a highlight of my career.”

She was similarly moved by her stint in the government back home as part of the Obama administration.

“It’s not as if I was spending time in the Oval Office with President Obama, but I was an appointee and I felt very proud to represent that administration and to get a chance to really serve the American public,” she says. “It’s that link between the issues I care about in terms of development in Africa, but also representing the American taxpayer and being basically an extension of the president, that to me was such an honor.”

Kinder has settled (for now) in London, where she continues her international development work at ONE. Established by U2 front man Bono and others in 2002, the advocacy group takes on extreme poverty by attempting to influence political leaders to support policies and programs that are “saving lives, helping to put kids in school and improving futures,” according to the ONE website.

“I’ve had so many different types of jobs,” Kinder says. “Some of them have been working in governments and being the decision-maker, or working in a think tank, but this particular job I was excited about, thinking about how to communicate and mobilize citizens and get people to care about this issue. So that’s why I joined ONE.”

Now that she’s rising in the ranks, she feels especially fortunate to have had numerous opportunities to travel and explore while an undergrad, when she went overseas and got to experience life and gain an understanding of issues at the local level in places like Chile, Kenya and Mexico. Kinder says her Notre Dame years “absolutely set her compass” to send her on her current path, and that she also draws on what she learned then quite a bit even in her work now.

“The more senior I get, the less I get the chance to really be present in a core community in the way that I did when I was at Notre Dame,” she says. “And that’s just invaluable, because as you get more senior in your career, you’re more of a decision-maker, and you’re kind of removed from the intense people-to-people experience that you have when you’re living in communities.”

Kinder’s future is definitely bright, but otherwise somewhat up in the air. “I do feel like the winds are shifting a little as I’m getting into my mid-30s,” she says, adding that she’s starting to think about a family, which is very important to her. Professionally, she intends to remain in the field of international development, going wherever her career path may take her.

“I’m drawn to positions where there’s a combination of a challenge and making a difference,” she says. “I really like to learn new issues and be thrown into situations where I feel like they’re important for the world and there’s something I can learn a lot from and contribute to. And I like to change quite a bit. I change issues and areas so I always feel like I’m pushing myself and learning something new.”

What that “something new” may be is uncertain, but she does know she’ll be keeping an eye out for ways to have an even greater impact.

“There really isn’t something that I haven’t done yet that I desperately need to do, which is kind of a nice feeling,” she says. “So I guess I want to get to a position, now that I’m a bit older in my career, where I can lead efforts and shape things in that way.”

She doesn’t have her eye on a specific goal or position, but Kinder does light up at the idea of one day going back to work for the White House, maybe as an advisor on international development.

For now, she’s quite content to take things as they come. After demonstrating her fighting spirit and love of a challenge during her Notre Dame days—both in and out of the athletic arena—she still sees each day as a chance to chart a new course, to take life as it comes.

“I’m somebody who’s never really planned that far ahead,” she says. “I sort of take things adventure by adventure.”