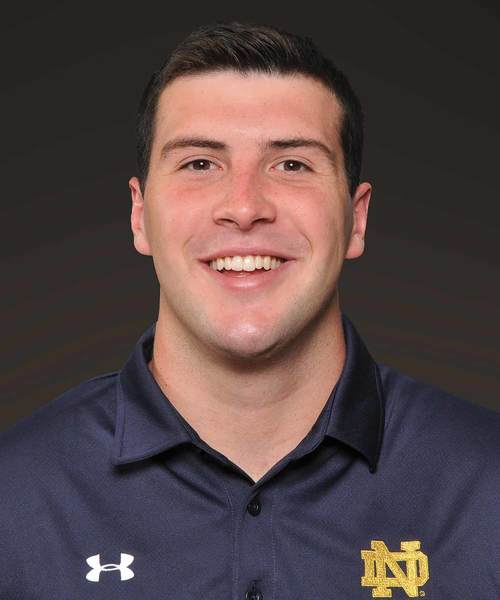 Nic Weishar is never alone when he runs onto the field at Notre Dame stadium on football Saturdays.

Of course he isn’t. Nearly 200 players, coaches and support staff comprise the University of Notre Dame football party for a typical home game, and the collective roar of 80,795 spectators greets the Irish as they emerge from the tunnel.

But Weishar, a sophomore tight end, derives his greatest comfort from a companion who’s with him only in spirit. His brother Andrew, older by four years, died of colorectal cancer after a heroic, two-year struggle in October 2012. Along with middle brother Danny, the three Weishar boys were uncommonly close, forming a rambunctious, sports-oriented bond growing up on the playing fields of Midlothian, Illinois, a working-class suburb just southwest of Chicago.

“My mom could tell you some stories,” Nic says wistfully, recalling their feisty backyard battles.

Danny and Nic were inspired by the characteristic resolve with which their oldest brother approached his most debilitating cancer treatments. “He told me he was going to beat it just like an opponent in football,” Nic says—and they were devastated when the illness claimed him. So exuberant, so determined, so full of life—the thought of his dying two weeks short of his 22nd birthday was almost unfathomable. They console themselves with the knowledge Andrew made a lasting impression on all who knew him.

“He was as unselfish and caring a person as you could meet,” Nic says. “Totally humble, just an unbelievably good guy. Even when he was dying, people would come to see him and he’d want to know how they were doing. He always put others ahead of himself.”

Andrew was diagnosed during his freshman year at Illinois Wesleyan University, where he’d gone to play football after a three-sport career at Chicago’s Brother Rice High School. His condition was not unknown to the brothers’ concentric circles of friends, and those friends did what they could to be there for Andrew as he fought for his life.

“He was really moved that so many people cared about him and went out of their way to help,” Nic says. “Even as his condition got worse, he kept saying, ‘We’ve got to pay this forward.’ He made us promise that we would.“

Promise kept. “Weish4Ever—the Andrew Weishar Foundation” was established shortly after Andrew’s death as his family sought to honor a legacy of spirit and courage. Its mission is to serve as an all-purpose resource for the families of children and adolescent cancer patients, providing financial, emotional and moral support, along with understanding and wise counsel.

“Our goal is to ease the burdens faced by these families in every possible way,” the foundation website states.

Danny Weishar followed Andrew to Brother Rice and graduated from the University of Illinois in May 2015. He balances his duties as the Foundation’s executive director with a full-time job in finance at J.P. Morgan Chase in Chicago.

“There’s a fair amount of work involved, but I have tons of help,”

The Weishars’ empathy for the families they assist is based on their own experience.

“Aside from huge medical bills, there are expenses involved with cancer treatment that you might not think about till they hit you,” Nic says. “Andrew went to the Mayo Clinic for surgery, so there were travel costs. Travel costs—hotels, meals, even parking if you’re going downtown for treatment—all of it can be a real financial burden on a family.”

The foundation receives referrals via word of mouth and from social workers at three Chicago-area hospitals where young patients are undergoing treatment. The grants are generally nonrestrictive.

“Sometimes a night in a hotel or a little vacation can be a way for the kids and their families to ‘feel normal’ and get a break from what they’re dealing with,” Nic says. “We understand that, and we don’t tell them how to spend the money. Andrew always appreciated those little breaks.”

The Weishar boys and their friends are at an age where they don’t need much reason to throw a party, so impromptu fundraisers occur throughout the year. The big-ticket event is “WeishFest,” a concert/picnic/reunion held in July at a minor league ballpark in neighboring Crestwood, Illinois.

“They signed autographs, posed for pictures—everyone had a great time,” Nic says. “I just mentioned at a team meeting that we were doing this, that I was coming over, that anyone who wanted to join me was welcome, and more than 40 guys signed up. For them to give up a Saturday at a time when we don’t get many breaks … was an unbelievable show of support.”

Months later, Nic remains touched by the gesture. But not surprised.

“It’s like family here,” he says of his Notre Dame experience. “I knew I’d be playing high-level football combined with a great education, but it’s the people who make Notre Dame special.”

Eddie Money was a good get for WeishFest organizers, but south suburban Chicago is Notre Dame country. Nic Weishar and his Irish teammates were the stars of the show.

“There was a lot of joy spread that day,” Danny says. “With Notre Dame behind us, this thing is going to get bigger and bigger and keep serving more families. We’re at 38 and counting. Our goal is to never have to turn a proposal away, to grow the foundation large enough to help everybody sent our way.”

The Weishar brothers felt they were reliving Andrew’s ordeal when they learned of Brendan McNicholas’s illness in December 2014. A classmate of Danny’s at Brother Rice, Brendan was 21 and completing training to become a paramedic when he was diagnosed with a particularly virulent strain of Hodgkins lymphoma. Despite months of aggressive treatment, some of it experimental, Brendan died in September 2015. The Weishar Foundation was there for him and his family.

“I can’t say enough about what those boys and the Foundation did for us,” says Colleen Ward, Brendan’s mother. “At one point Danny gave Brendan $5,000 and said, ‘This is for whatever you need.’ He was at the wake and the funeral. I have another son, Nolan, who’s at the University of Illinois. Danny still calls him to check in and see how he’s doing. He knows what it’s like to lose a brother.”

The McNicholas family also believes in paying it forward. In Brendan’s obituary, they requested donations to the Weishar Foundation in lieu of flowers.

Jake Schied, at 9 the youngest of Chris and Beth Schied’s four children, has dealt with Retinoblastoma—a form of eye cancer that begins in the retina—most of his young life. He lost one eye to the disease as a 2-year-old, and the other when the disease recurred six years later.

Jake is now blind, but cancer-free for more than a year, and the Weishar Foundation is part of his life.

“They’ve been great to us, huge,” Chris Schied says. “We were going back and forth to Philadelphia to see a specialist, and they helped with that. They don’t just give you money and disappear. They still check in to see how Jake’s doing.”

Jake was an honored guest at WeishFest, and Chris recalls how accommodating and down to earth the Notre Dame players were as they mingled with the crowd.

So the Schieds are Irish fans for life?

Nic Weishar broke with family tradition and chose Marist over Brother Rice for high school. As a Red Hawk, he became one of the most productive receivers in Illinois history, finishing his prep career with 237 catches for 3,050 yards and 28 touchdowns. The total package? He also played defense, was a basketball standout and had the grades to go anywhere. Michigan, Northwestern and Notre Dame were the three finalists from among the dozens of schools that sought him.

The recruiting process grew dizzying at times, but Nic had a slightly older, wiser head to consult when things got crazy.

“Andrew was on medical leave from school, so he was able to go on a lot of the trips with me,” Nic recalls. “It was great having him there. He was a little older, so he knew what questions to ask. He didn’t push me in any one direction. He tried to make sure I didn’t miss anything and that the coaches were straight with me.”

Notre Dame has been where tight ends go to flourish since the Rockne era, so Weishar didn’t see the field as a freshman. He hit the weight room, intent on adding bulk to the 215 pounds he carried as a high school senior, a necessity if he were to perform the blocking duties required of a Notre Dame tight end. He brings first-rate receiving skills to the position; if he masters blocking, he might be next off the assembly line of tight ends the Irish have been sending to the NFL in recent years.

But a possible pro career isn’t Weishar’s reason for being at Notre Dame.

“It’s a great platform for me to spread the word about our foundation and its work,” he says. “I’m on the Beneficiary Committee that reads over the referrals and helps make decisions on the families who get benefits. Danny is more directly involved as the executive director. We don’t just give you money and forget you. We’re with you all the way through the process.”

Even when the process, for all their efforts, doesn’t achieve the desired results. “Danny,” Nic says quietly, “has spoken at some of the funerals.”

It’s the Weishars’ hope that families who lose loved ones will be comforted by memories in the same way they are.

“Andrew’s time with us could not be a better blueprint for how to live a life of faith, courage and strength, knowing each day is a gift,” Danny says.

Adds Nic: “I think about him every day. I try to channel my inner Andrew and be a good, tough competitor on the field and a truly good person off the field.”