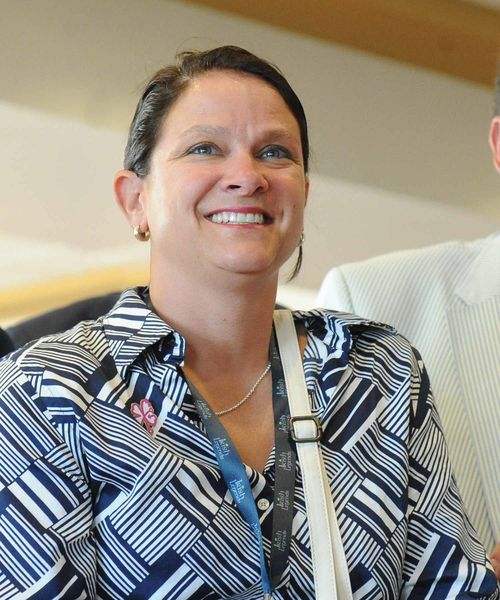 She fought the battle and won—twice

The wife of the newly minted Fighting Irish football coach described the placard as her “Hail Mary pass,” a permit that was impervious to the inscrutable laws of parking at the University of Notre Dame. In the few times Paqui Kelly had visited campus since her husband, Brian, had been hired, she had parked her minivan without care or consequence.

Today, however, was her first game day in South Bend. This was a rainy April Saturday in 2010 at the Blue-Gold Game, Brian Kelly’s unofficial debut as the Fighting Irish head football coach.

“I’m sorry, ma’am,” the traffic guard told Paqui Kelly as she pulled up to the gate with 11 passengers, “but this pass does not work on game days. Only during school days.”

Inside the minivan, Paqui smirked at the irony. From the back seat, children’s pleas could be heard: “Mom, just tell him who you are.”

“That,” she says now, recalling the moment, “is why you never can think you have it all down.”

Paqui Kelly is a two-time breast cancer survivor. She would know. She never drank, never smoked and is the fourth of six sisters none of whom, before her diagnosis, had ever been diagnosed with cancer. When, at the age of 37, Paqui (short for her given name, “Francisca”—her mother is from Madrid) learned that she had a cancerous lump in her left breast, there was no known history of cancer in her family.

“Of all my sisters, I’m the healthiest,” says Paqui.

In December 2002, Brian had just led Grand Valley State to the first of two consecutive NCAA Division II national championships. Paqui was teaching chemistry at the local high school. Their three children, Patrick, Grace and Kenzel, were ages 6, 3 and 2. During a routine checkup, Paqui—at the behest of her physician—had a mammogram performed.

“Usually you wait until you’re 40, but my youngest was 2 and I was done having kids,” says Paqui.

“My breasts were back to their normal size and my doctor said he just wanted to have a baseline.”

Two cysts were discovered in Paqui’s left breast and she was advised to return in six months. Through self-examination, Paqui felt the lumps growing and returned to her physician, who advised that she undergo a lumpectomy.

“A lumpectomy promised an 80 percent cure rate in terms of the five-year marker,” says Paqui.

“A lumpectomy followed by radiation and chemotherapy increased the odds to 96 percent.”

Paqui and Brian Kelly had their Hail Mary pass against breast cancer.

“We dealt with it like a game plan,” Paqui says.

Before Paqui’s hair fell out, she organized a hair-trimming party and allowed her children to do the honors. For the 90-minute, one-way drive to the hospital where she would undergo chemotherapy, Paqui insisted on going alone.

“I told Brian that it was a waste of time for him to come along,” says Paqui, who shares her husband’s affinity for efficiency.

It was a winning game plan. But there was just one problem. The game changed.

Paqui’s full recovery odds were based upon her cancer having no genetic basis. Two and a half years after her initial diagnosis, the second-oldest of Paqui’s sisters, Monie, was also diagnosed with breast cancer. As Paqui dug into the family history of her father, who himself had no female siblings, she learned that a few great aunts had died in their 40s, although the causes of their deaths were unknown.

“Nobody really knew what cancer was back then,” says Paqui.

The disease was, in Paqui’s case, most likely a product of a genetic mutation.

The ramifications of that prognosis changed everything.

“Just like that, the odds went from a 96 percent chance that the cancer would not return to those odds swinging completely the other way,” says Paqui.

In 2007, nine months shy of the five-year marker for a recurrence, when most recovering cancer patients are in the clear, Paqui was diagnosed a second time with breast cancer. By this point in time her husband’s career had leap-frogged from Grand Valley State to Central Michigan to Cincinnati.

“Brian was more upset the second time around than I was,” says Paqui.

“We’re both go-getters. He just wanted it to be done.”

Paqui’s husband was not the only member of the Kelly clan who voiced his or her displeasure openly. Grace, then 7, reminded her mother, as 7-year-olds are wont to do, of a broken promise.

“You said we weren’t going to have to do this again,” said Grace.

“You said that we were done with cancer.”

“And she has a long memory.”

In 2008 Paqui opted for a double mastectomy.

Monie had already had the procedure performed. Their oldest sister, Eli, also underwent a double mastectomy as a preemptive measure. The disease has brought a tight-knit group of sisters even closer together. Take, for example, their relative aversions to medicine.

When Paqui was about to begin chemotherapy in 2003, she and Brian were informed that 20 percent of patients experience severe nausea.

“Well, she’s going to be one of them,” Brian told the doctor.

Paqui nodded her head in agreement.

“Sure enough, I was throwing up,” says Paqui.

When Monie was in the midst of her chemotherapy program, Paqui asked her big sister how she was faring.

“Really, Paqui,” Monie told her tee-totaling sibling, “I’ve had hangovers worse than that.”

After the second bout with breast cancer, Brian and Paqui established the Kelly Cares Foundation in 2008. While the foundation puts an emphasis on breast cancer, Paqui is adamant that its three pillars be health, education and community.

“I didn’t choose to be a cancer patient, but I am so here’s what I can do,” she says.

“I try not to be a spokesperson for breast cancer. I try to be one for health in general.”

Since Brian accepted the Notre Dame coaching job in December 2009, Kelly Cares has grown in visibility and in scope. It has gone from one or two events per year to more than half a dozen, including a popular “Football 101” course in which Fighting Irish coaches explain the fundamentals of the gridiron to women who want to understand the game better. For Paqui, whose two sons play Pop Warner football, the course is not necessary.

“I’m at a football game every Saturday morning and then most afternoons in the fall,” she says.

Mostly, though, Paqui accepts invitations to speak on behalf of breast cancer awareness and to propagate the parade of pink we see on gridders in the month of October, which is Breast Cancer Awareness month.

“Breast cancer is 99 percent curable if it’s caught in stage one,” says Paqui.

“If I had waited until I were 40 to have my mammogram, I might not be here today. That’s why it’s so important for me to share my story. To raise awareness. Denial is not a tool you can use.”

After a recent speaking engagement, the coach’s wife was approached by a woman who was stirred by Paqui’s oncological odyssey.

“How about you go to the doctor first?” Paqui answered.

For the curious, Paqui Kelly eventually, after being rebuffed at three different entrances, did relent on the morning of the 2010 Blue-Gold game. As a third guard informed her that her Hail Mary pass was invalid, she sighed.

“Welcome, Mrs. Kelly,” the guard said, who then apprised her of all the available routes and spaces her vehicle might take. Then he fixed her with a concerned stare.

“Do you even know where you’re going?”

Did he even know where she had been?