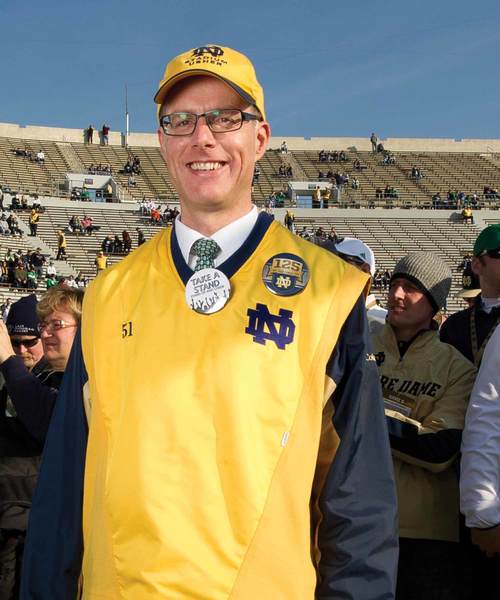 If it’s the Thursday before a University of Notre Dame home football game, then Paul Matthew has a train to catch.

Not just any iron horse—the 9:40 p.m. train to the land of the Four Horsemen. The overnight train from Syracuse, N.Y., to South Bend, Ind., following a three-hour drive to Syracuse from Ottawa, Ontario, Canada.

Meet Matthew, Canada’s only full-time usher at Fighting Irish football games, and perhaps the only volunteer in the world who commutes 720 miles to report for duty. Paul’s brother, John, is also a Notre Dame usher, but occasionally has conflicts with his full-time job as the marketing producer for Bluejays.com in Toronto.

The two used to drive together to South Bend, but now they meet up there. John usually flies from Toronto. At Notre Dame, they sleep in bunk beds at the home of the man who used to be in charge of stadium security, the man who made it all happen.

The Matthew brothers grew up in Ormond, south of Ottawa and north of Winchester. So, how did a couple of Ottawa-area guys end up with a sweet gig at historic Notre Dame Stadium?

Sitting in a chair at his day job with Statscan at Tunney’s Pasture, Paul Matthew answers the question with a Sammy Sosa quote: “Baseball been berry berry good to me.”

Yes, baseball, not football, is the link to the usher duties at the University of Notre Dame. The Matthew brothers are sabermetricians, baseball number geeks who belong to the SABR (Society for American Baseball Research). More than a decade ago at one of the regular SABR conventions, they met former SABR president Cappy Gagnon, who happened to be coordinator of stadium personnel for events at Notre Dame Stadium until he retired a year ago.

As a guest of Gagnon, John Matthew first made the trip to South Bend in 2001, followed by his brother Paul a year later. Every year thereafter they worked as volunteers at one or two home games per season. In 2011 they took the plunge for full-time duties. Of the 850 stadium ushers, 150 hail from out of town, although the Matthew boys are the only ones from another country.

During Notre Dame’s impressive 2012 run, Paul worked every home game. Matthew will return for the Blue-Gold game in April, but brother John has other business—a game between the Blue Jays and New York Yankees.

Oddly enough, Paul was more of a college hoops fan growing up. North Carolina was his team. Duke was the sworn enemy.

“But I went down (to Notre Dame) annually, and gradually I came to understand college football was a big deal,” Matthew says. “Spend a weekend with Cappy, who bleeds blue and gold, and it’s infectious.”

On game days, Paul works crowd control in the north end zone while John is on the sidelines, “guarding” the Irish Guard, who in turn guard the marching band—all part of the lore and pageantry of football in South Bend.

Among his duties, Paul escorts the coaches from their press box perches to the dressing room at halftime and game end. In theory, he also keeps fans off the field postgame, although when Irish fans decide to storm the field, as they did following the overtime win against Stanford in October, there isn’t a lot that one Canadian usher can do about it.

Never does Matthew act like a fan, snapping pictures or getting swept up in the emotions of the day.

“I’ve got to be more Catholic than the pope,” he says.

Standing at field level beyond the north end zone, it’s hopeless trying to see much of the game—tough to distinguish a three-yard gain from a three-yard loss—so Matthew watches a taped replay back home in Ottawa. Occasionally, though, he has the best view in the house, like the time against UCLA in 2006 when receiver Jeff Samardzija caught a Brady Quinn pass and rambled into the end zone, running right at Matthew (who happened to be stationed in the south end zone that day). Even now, Matthew can’t get over the size of the players, the ferocity of the hits, the youthful faces.

As a general strategy, Matthew uses his own eyes as isolation cameras to focus on two players—tight end Tyler Eifert, on offense; defensively—who else?—linebacker Manti Te’o, the heart and soul of Notre Dame football and the rarest of the rare—he became a Heisman Trophy candidate on the defensive side of the line.

“Watching Te’o is just like watching the ball,” Matthew says, because Manti is always around it. With his dignified, almost regal bearing, the Hawaiian native has won the hearts of Irish Nation, persevering through daunting personal tragedy: the deaths of his grandmother and his girlfriend within a 24-hour period, just days before the Michigan State game.

How much do Irish fans cherish their team? Nearly as much as they hold dear the traditions of Irish football. Every one of them wants to “win one for the Gipper” (Knute Rockne speech) and sees him or herself in Rudy Ruettiger, the walk-on player featured in the 1993 movie Rudy.

A few years ago, the football program started letting fans experience the walk through the tunnel to the field on the Friday before game day. Despite pouring rain the day before the 2012 Stanford game, some 5,000 fans walked the tunnel. As many as 7,000 have done the walk in a single day.

If a fan doesn’t have a game ticket, there is at least the tunnel, and a glimpse of the storied gridiron.

“People actually drive thousands of miles just to walk down that tunnel and then go home,” Matthew says. “It has happened.”

It’s a small world, seven degrees of separation and all that, but the world shrinks that much more at Notre Dame. Matthew has met or seen all manner of Domer celebs, from Joe Montana to Regis Philbin to Vince Vaughn. He’s met Canadian Olympians, and some people from New Brunswick with an Ottawa connection.

Turns out that one of the New Brunswick visitors was Greg Morris, the father of Ottawa Senators communications director Brian Morris, one of the biggest Notre Dame fans in Ottawa. Brian’s brother, Terry, and a friend, were in South Bend with Greg on this particular pilgrimage. Brian used to work for the Triple-A Ottawa Lynx baseball club. So did Paul Matthew. From Ottawa Lynx to Notre Dame links.

Matthew uses his government holiday time for the Friday and Monday travel around the Saturday home games. He could get there and back faster, but the culture of Notre Dame football is to be savored, not sampled.

“With college football, it’s not [only] the games, it’s the experience,” Matthew says.

The man knows. He’s been to them all. The Friday kick-off luncheon, where a few players and head coach Brian Kelly will speak, the Friday pep rally, as emotions start to build for the upcoming game. Not to be missed is the Midnight Drum Circle, the Notre Dame Drum Line’s time to shine and the “official” start of game day. This year the drum corps has displayed cymbals of success.

Matthew, by the way, doesn’t tire of hearing the Irish fight song for the 1,565th time. In case he pines for it, he has a CD with 14 variations of the “Notre Dame Victory March,” part of his personal supply of Notre Dame memorabilia that could stock a small store.

Nor does he tire of this unusual volunteer gig, a three-hour drive plus a 12-hour train ride from home. And then back again. Cappy be praised.

“I’m blown away why he’s taken my brother and me in,” Matthew says, tears welling in his eyes as he thinks of his pal, Cappy, a 1966 Notre Dame graduate. “I don’t understand it, but I’m eternally grateful. I’m hopefully going to do this forever.”