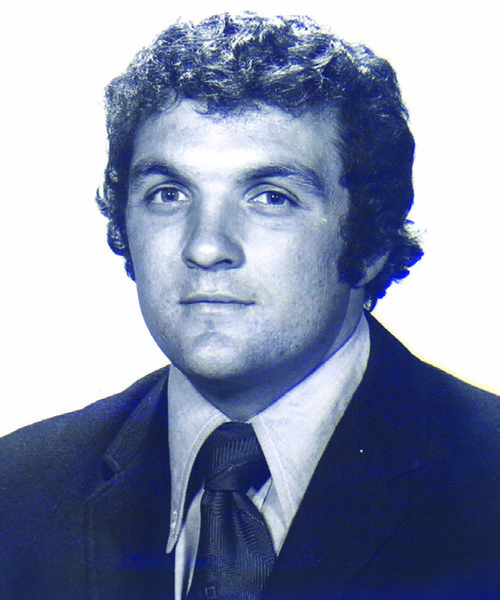 His Story is the Stuff of Legends

In the first century A.D., St. Paul’s ministry took him to outposts across the Roman Empire: to Ephesus and Philippi, to Corinth and Thessalonica.

“I’ve probably hit every state at least twice in the past five years,” says the preacher you know better as Rudy.

Between Aug. 1 and Halloween of 2017, the most renowned walk-on in college football lore touched down in 32 American cities. Metropolises and backwaters. He traveled to all four points on the map (Boston, San Diego, Orlando and Portland) and everywhere in between. Anywhere that people yearned to meet him and listen to his story.

“He literally lives on airplanes,” says his full-time assistant, Cheryl.

“No one knows your journey but you,” Rudy tells his audiences, but no one shares the story of his journey more than he (and, to be fair, Cheryl, who books all of Rudy’s travel and is also his ex-wife and the mother of their two children, knows his itinerary better than he does). Twenty-five years after the release of “Rudy,” its namesake, now 70 years old, is still traversing the continent, spreading his message of dreams, determination and above all, persistence. This is the gospel according to Rudy.

“I only played 27 seconds so there’s not a lot to talk about,” Rudy proclaims at the outset of a homily that lasts upwards of 45 minutes. The congregation, some of whom initially seem dismayed that Sean Astin (his screen persona) is not addressing them, pays rapt attention.

They listen to him.

Almost as much, though, Rudy listens to them. That’s an essential part of this liturgy.

“Everywhere I go, someone wants to tell me their ‘Rudy’ story,” says Rudy.

Everywhere. Not long after “Rudy” premiered in October 1993, its namesake was invited to screen the film at the White House. The lights went down, the film began. An older gentleman seated directly to Rudy’s left began whispering to an acquaintance. Rudy was irritated. You don’t talk during my movie.

As the closing credits rolled, the man turned to Rudy. He was incredulous, nearly in tears.

“I’m Jewish and I shouldn’t be where I am today,” said media giant Larry King, no less wide-eyed than if he were meeting Moses. “Your story’s my story!”

From the First Letter of Rudy to the Odessans: “If you don’t build relationships, nothing good happens.”

In the quarter-century since the film’s release, Rudy has probably heard more professions of faith than your parish priest. He understands the universal appeal of his struggle and conquest. As a speaker he is unpolished, but that only makes him more approachable, especially because he is so passionate and sincere.

“You’re not a good public speaker,” an audience member once told him. “Yeah, I know,” replied Rudy, “but I got paid and you didn’t, so sit down.”

The film’s fans yearn, if not to touch the hem of his garment, then to touch his soul as he has theirs. To form a bond.

“You have to sit there and listen,” Rudy says. “Sometimes it’s hard.”

But often, it’s magical. An October Sunday finds Rudy at a memorabilia shop on Long Island’s north shore, in the town of Huntington. Among the dozens of acolytes who have waited for an audience with the erstwhile walk-on is Chris, a young man who resides locally. Chris ordinarily works Sundays, but today he has the day off. So he packed his wife and their toddler twins into the family car so that all could meet Rudy. He introduces himself.

“I’m Chris Hogan with the Patriots,” says the man who catches passes from Tom Brady for a living. “I just wanted to tell you how much your movie meant to me.”

If anyone can out-Rudy Rudy, it may be Hogan. He was not even on the football team as an undergraduate at Penn State, playing lacrosse instead. Upon graduating, Hogan had one year of athletic eligibility remaining, so he walked on at Monmouth University in New Jersey. He went undrafted and was cut by three NFL teams before finally earning a roster spot with the Buffalo Bills in 2015. He has since played in two Super Bowls with New England, catching 10 passes in those two contests and earning one ring. And yet Rudy, the scout-teamer with one career tackle, is Hogan’s hero.

“Moments like that tell you we did the right thing with the movie,” Rudy says later. “I take myself out of the equation. It’s about the message.”

From the Second Letter of Rudy to the Bostonians: You gotta remember: Be happy for people. Be positive. Don’t hang around the “Why?” guy. That’s draining. Hang around the “Let’s do it!” guy.

After Rudy Ruettiger sacked Georgia Tech quarterback Rudy Allen on Nov. 8, 1975, he had no idea what to do next with his life. He was 25 years old, a Navy veteran and had just fulfilled his lifelong dream of taking the field for the Fighting Irish. He would not conjure another impossible dream — at least not for another half hour.

In the postgame locker room in the bowels of Notre Dame Stadium, an ink-stained veteran from the Chicago Tribune approached. He told the 5-foot-6 defensive end that he’d never seen Notre Dame fans chant a player’s name or the Fighting Irish carry a teammate off the field on their shoulders (he’d probably never seen a 5-6 defensive end in that uniform, either).

“This just doesn’t happen here,” the writer told Rudy. “This is Hollywood stuff.”

At that moment the second quixotic dream in Rudy’s life was conceived. He never wavered. He saw “Rocky” and wrote Sylvester Stallone. Sly wrote back, mentioned something about a previous commitment, a film he was shooting called “Rambo.”

Rudy remained in South Bend for years, telling anyone who would listen (and just as many who wouldn’t) why his story that climaxed with one tackle belonged on the big screen. Bob Golic would set the Notre Dame career tackles record in 1978 (479) and Bob Crable would set the bar higher in 1981 (521, still unsurpassed) and always there was Rudy, promulgating the tale of his one tackle.

And then one day in the late 1980s, Notre Dame assistant coach Barry Alvarez strolled into the South Bend car dealership where Rudy was working. At the time Rudy’s film project had no pulse.

“Rudy, are you going to do this car stuff all your life?” Alvarez asked.

Rudy told Alvarez his saga and of his dream of turning it into an inspirational film like “Rocky” or “Hoosiers.”

“Coach Alvarez looks me in the eyes,” Rudy says, “and he tells me, ‘When I get my head coaching job, we’re going to show that movie to my team and you’re going to be there.’”

In November 1993, just one month after the release of “Rudy,” Alvarez screened the film for his Wisconsin Badgers
and only afterward introduced them to his special guest. It was the eve of Wisconsin’s biggest game in decades, against No. 3 Ohio State, and the players went berserk. The following afternoon they tied the Buckeyes, an outcome that helped them seal the school’s first Rose Bowl berth in 31 years.

Rudy has always known far more detractors than Barry Alvarez types, but he has never understood the upside of being a downer. And that’s what makes his legend so aspirational. It’s not about fame or fortune or having a movie made about your life, it’s about attitude.

From the Second Letter of Rudy to the Chicagoans: You have a chance to be great in your moment. There are no excuses. The moment that you can change your thoughts, that will change your life.

Countless anonymous faces approach him to give their testimony. The former juvenile delinquent who saw “Rudy” who straightened out and joined the Marines. The middle-aged woman who watched the film and decided to return to college for her degree. The USC film student who was on the verge of dropping out before listening to Rudy speak and becoming reinvigorated.

“I’ll never really know how many lives this movie has touched,” Rudy says.

He is a name-dropper. He knows that. Rudy is more prone to share anecdotes of his brushes with greatness than of the inspirational tales from the proletariat. The time when Henry Winkler told him that his son had seen “Rudy” a hundred times (“Can you believe that?!? The Fonz!”).

There was an autograph show in Las Vegas in which Rudy found himself sitting next to the baseball hit king, Pete Rose.

“The crowd was chanting ‘Rudy! Rudy!’” Rudy says. “Pete just looked at me and smiled. Then he said, ‘Four thousand one hundred and ninety-two hits versus one tackle.’”

When Rudy addresses the throngs, he devotes more time to the obstacles he overcame in getting the movie made than to his football odyssey.

“That’s because the movie was harder,” he’ll say. “I had to convince Notre Dame and Hollywood.”

If you think “Rudy” was stuffed with blarney, the quest to get “Rudy” in theaters was a series of serendipitous events. A chance meeting with a friendly postman in Malibu, for instance, led Rudy to the door of “Hoosiers” screenwriter Angelo Pizzo after Pizzo had stood him up for lunch. For four hours. Being Rudy, he did not admonish Pizzo for bailing, but simply said, “I’m Rudy, and you’re late for lunch!”

Another example: The night before Rev. E. William Beauchamp, C.S.C., the former Notre Dame executive vice president who would give a final thumbs up or down to the project, was to meet Pizzo and director David Anspaugh, some friends invited him over to their home for dinner. There they watched “Hoosiers,” which Beauchamp had never seen.

After that the project was a slam dunk (something Hickory High coach Norman Dale would have frowned on).

Two years passed between Rudy’s Malibu meeting and Father Beauchamp’s thumbs up, two years during which Rudy mowed lawns and shoveled snow to get by.

The dreamers in his audience applaud his achievement, but how many truly appreciate the sacrifice? How many
of them, how many of us, would have persevered for as long as Rudy did? Not once, but twice.

And now, for at least a generation of people who have never been to South Bend and never seen the Irish play football, Rudy’s movie is their impression of the University of Notre Dame. It may be as powerful a University marketing tool as exists.

Rudy and Cheryl have overseen the Rudy Foundation, a nonprofit that awards scholarships to at-risk youth, since 1997. He is a septuagenarian now, but he will continue his peregrinations back and forth across the country for as long as people assemble to hear him. He will do this in part to earn a living and in part to contribute to the foundation. He will do this in part because he does enjoy telling his story.

But he also does this for the same reason St. Paul sailed all over the Mediterranean and walked across modern-day Turkey and Greece 2,000 years ago. Because he has seen it with his own eyes. He is living proof.

“It’s all about the power of faith,” says Rudy. “Faith can take you anywhere. Faith can change your life.”