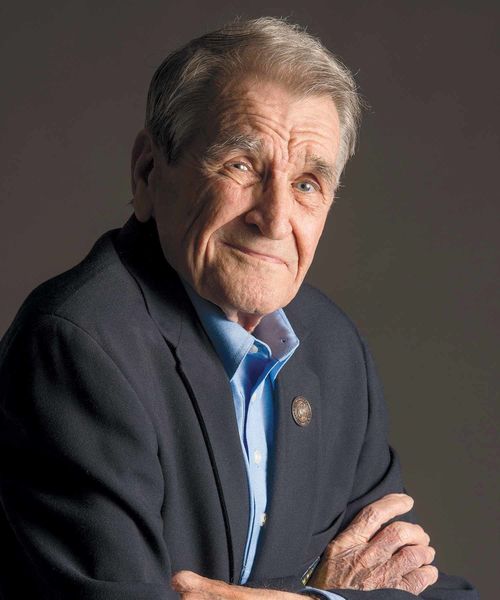 “You won’t be taken to the cleaners…if your driving is spotless.”

A University of Notre Dame legend has departed after 55 seasons of leaving fans laughing, groaning or grimacing at Irish home football games.

Former Indiana State Police Sgt. Tim McCarthy, who had been offering his late-game traffic safety messages (and generally an accompanying pun) at Irish home football contests since late in the 1960 campaign, announced in April he was retiring from that role.

McCarthy also helped direct traffic at Irish games for many years until his retirement from that job in 1979.

Born in Fort Wayne, Indiana, McCarthy also served until 1987 as Porter County sheriff and still lives in the Valparaiso, Indiana, area. His wife, Carole, also worked for the sheriff’s department, and his father was a career police officer in Fort Wayne.

Yet it’s been McCarthy’s end-of-the-third-period messages over the Notre Dame Stadium public address system that—like the “Play Like A Champion Today” sign, the Hesburgh Library mural (dubbed “Touchdown Jesus”) and the “Win One for the Gipper” saga—turned him into an iconic figure relative to the Notre Dame football experience.

Ironically, the first two messages McCarthy offered at the end of that 1960 season were delivered with a serious tone. In the offseason he made a decision to add a quip at the end of each safety tip, and he began that with the 1961 season in hopes of increasing the effectiveness of his remarks.

“When I began using the quips, it resulted in a barrage of loud reactions from the crowd,” says McCarthy. “Then it graduated to where the fans began listening for it and it would be quiet enough to hear the entire message.”

And he’s forever thankful that he never took his wife’s advice to drop the humor.

“My wife asked me if there were many boos and groans, and I told her there were a few. She suggested stopping the quips. I told her absolutely not because at least now the fans are listening to the entire message just to hear how corny the quip will be.”

The end result? McCarthy became an integral part of the fabric of a Notre Dame football weekend—and his opening line, “May I have your attention please? This is Tim McCarthy with the Indiana State Police,” became one of the institutions of a home football Saturday.

While timeouts and other breaks in the action are now scripted, veteran Notre Dame Stadium public-address announcer Mike Collins remembers not so long ago when he and McCarthy at times struggled to fit the message into the game.

“The tradition lately has been for Tim to read his message at the end of the third period. But, not that long ago, we were not connected to the bands by headsets the way we are now. It wasn’t uncommon for one of the bands to launch into a song at a timeout, and so it might take four or five or six breaks before we could fit him in somewhere in the second half.”

In fact, Collins, who worked his 200th Irish home game in the 2015 season opener versus Texas, became fast friends with McCarthy. They even collaborated on a 2009 book, “May I Have Your Attention Please … Wit & Wisdom from the Notre Dame Press Box.” They still have breakfast or lunch together about once per month.

After 55 years on the job, McCarthy had more than his share of stories:

—“In the old (Notre Dame Stadium) press box I generally watched the game from the outside balcony where the television cameras were set up. State troopers wear a ‘campaign’ style hat with a metal badge on the front. It was a close game, and when the Irish scored the winning touchdown I jumped up to cheer. The top of my head hit an overhead steel beam, and I soon realized my head was bleeding. The hat badge had scraped through my scalp. I pulled the hat down tight to keep the blood from leaking out and drove to the hospital emergency room and required six stitches.”

—“From the balcony of that same old press box was a view of what was then a fans’ parking lot. During one game I noticed some youths breaking into cars. I pointed this out to longtime South Bend Tribune photographer Dutch Henning. I had him take a close-up photo. Dutch developed it and gave it to the sheriff’s department who used it to identify and arrest the youths.”

—“It’s not unusual to see a well-known celebrity in the press box. Prior to game time the elevator to the press box is always busy. One day I noticed former world boxing champion Muhammad Ali crowded in with me. By accident, Ali stepped on my shoe. As he turned to excuse himself, I said, ‘Perfectly okay, Champ, no problem whatsoever.’ Later he was seen patiently signing autographs for his fans. I wondered if he would sign the top of my shoe, but I didn’t ask.”

—“At another game former Secretary of State Condoleezza Rice and some friends boarded the elevator. I never saw a person so happy and so bubbly as her.

I later learned the reason she likely was so happy is because she hit a hole-in-one on the Notre Dame Golf Course that morning.”

Collins has a few stories, too:

—“My first game doing the PA was the first night game at Notre Dame Stadium against Michigan in 1982. Even with the temporary lighting at the stadium, it was so dark in the PA booth I had to hold up a lighter so Tim could see.”

—“I can’t tell you how many times I’ll be in the booth and I’ll sense there’s someone behind me and I’ll turn around. And they’ll say, ‘Where’s Tim McCarthy?’ None of these people know what he looks like, and yet he’s like some kind of a rock star.”

For years, McCarthy was simply the voice in the wilderness at Irish games. Slowly but surely that changed. In 1992, the University published a book titled “Notre Dame Football Today” that included a feature piece and full-page photo of McCarthy at the stadium. McCarthy earned more and more invitations to more and more events, often related to delivering some sort of message akin to his safety puns. He had—somewhat grudgingly—become a celebrity in his own right. The Notre Dame Monogram Club presented him with an honorary monogram in 2013.

“For years the Stadium crowd never saw my face. After I began appearing at some University and student events is when I became recognized. Students saying hello while walking through campus is really a happy experience for me. I appeared at a few pre-game rallies, some of the student hall rallies and always at the Dillon Hall rally. It was always enjoyable to be at student events because those young men and women are the very best. Always number one in my book,” says McCarthy.

Little did McCarthy know when he accepted the job as safety education officer for the Indiana State Police what a career it would become. When he retired from the state police in 1979 he thought that might be the end of his role at Notre Dame Stadium, but then-athletics director Moose Krause invited him to continue.

The rest is history, all based on a series of three-inch-by-five-inch index cards on which McCarthy typed each message—and he saved them all.

“It’s been a long run, and it’s something I’ve particularly enjoyed,” he says.

For someone who never coached, carried, threw or kicked a football at Notre Dame Stadium, McCarthy left an indelible mark on the football program at the University of Notre Dame.

Even if most fans still have no idea what he looks like.

“The trip home will be heavenly … if you drive like an angel.”